As Audiences Look for Apolitical Laughs, Late-Night Shows Aren’t Worried About a Lack of Material 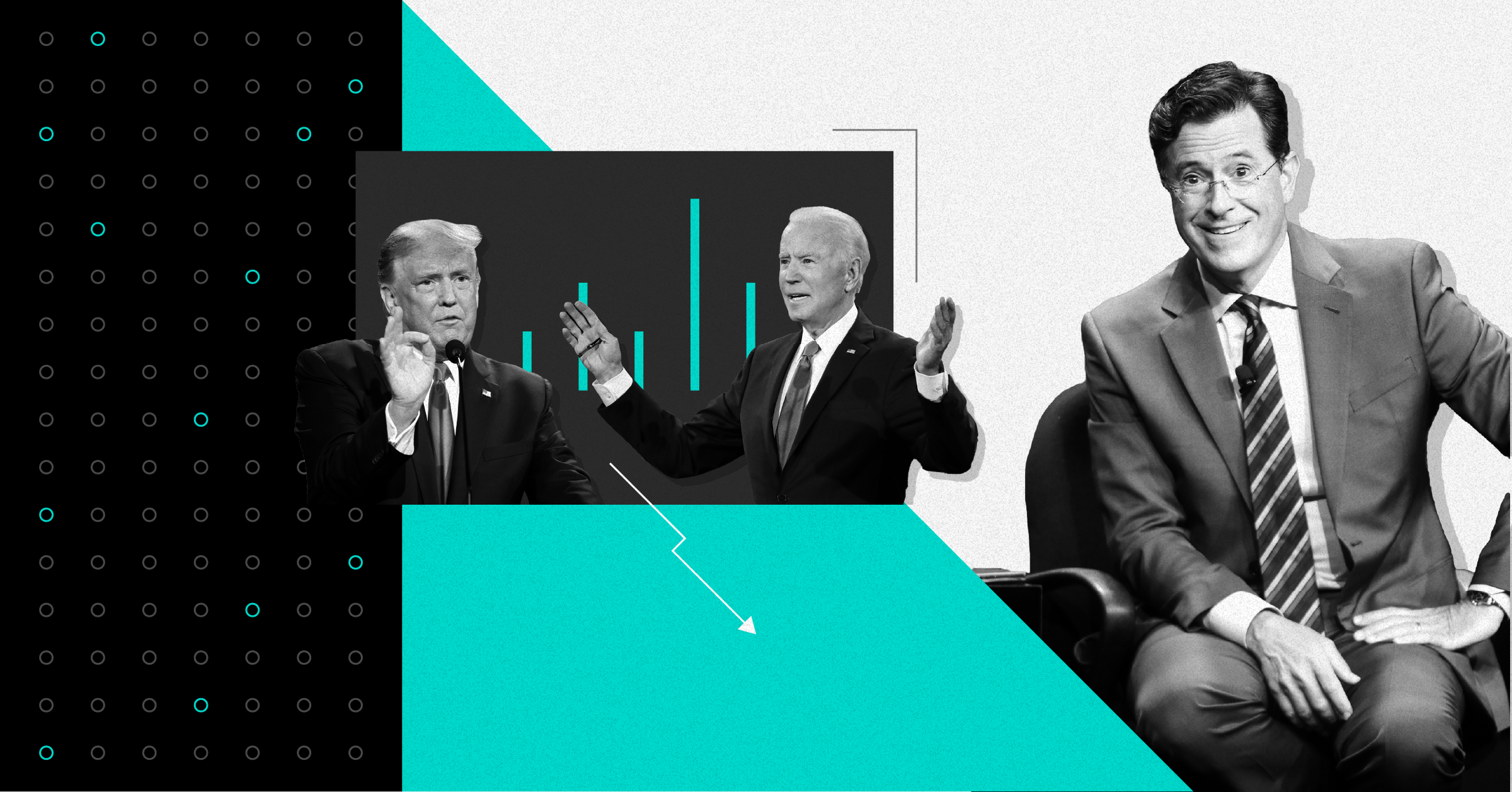 Audiences are divided on political humor, with 37 percent saying jokes that don’t involve politics would make them more likely to watch a late-night program, while 34 percent said jokes about Republicans and Democrats would make them tune in. (Getty Images / Morning Consult artwork by Tadiana Martinez)
By Sarah Shevenock

Seth Meyers, who has gleaned hours of comedic material from former President Donald Trump as the host of “Late Night,” ended his Nov. 2 monologue with a joke about IHOP syrup.

“That was a syrup joke,” Meyers said after the punchline, giggling to himself in the empty studio. “And should everything go the way we want it to, you’re going to get a lot of syrup jokes in the coming months.”

As the Biden administration inherits the global pandemic and a divided electorate, late-night comics are also facing a laborious challenge: What do you talk about when your most reliable source of material leaves office and is banned from social media platforms? But giving viewers some space from the political humor that’s defined the last four years may not only keep them watching, but could lead to a renaissance of form and content in the late-night space.

“We had two terms of George W. Bush and people kind of said the same thing when Obama came into office, where it’s like, ‘Here’s this great charismatic leader. There’s nothing that’s going to be funny anymore,’” said Alison Camillo, executive producer of “Full Frontal with Samantha Bee.” “And boy, were we wrong. There’s characters everywhere, even Biden himself.” 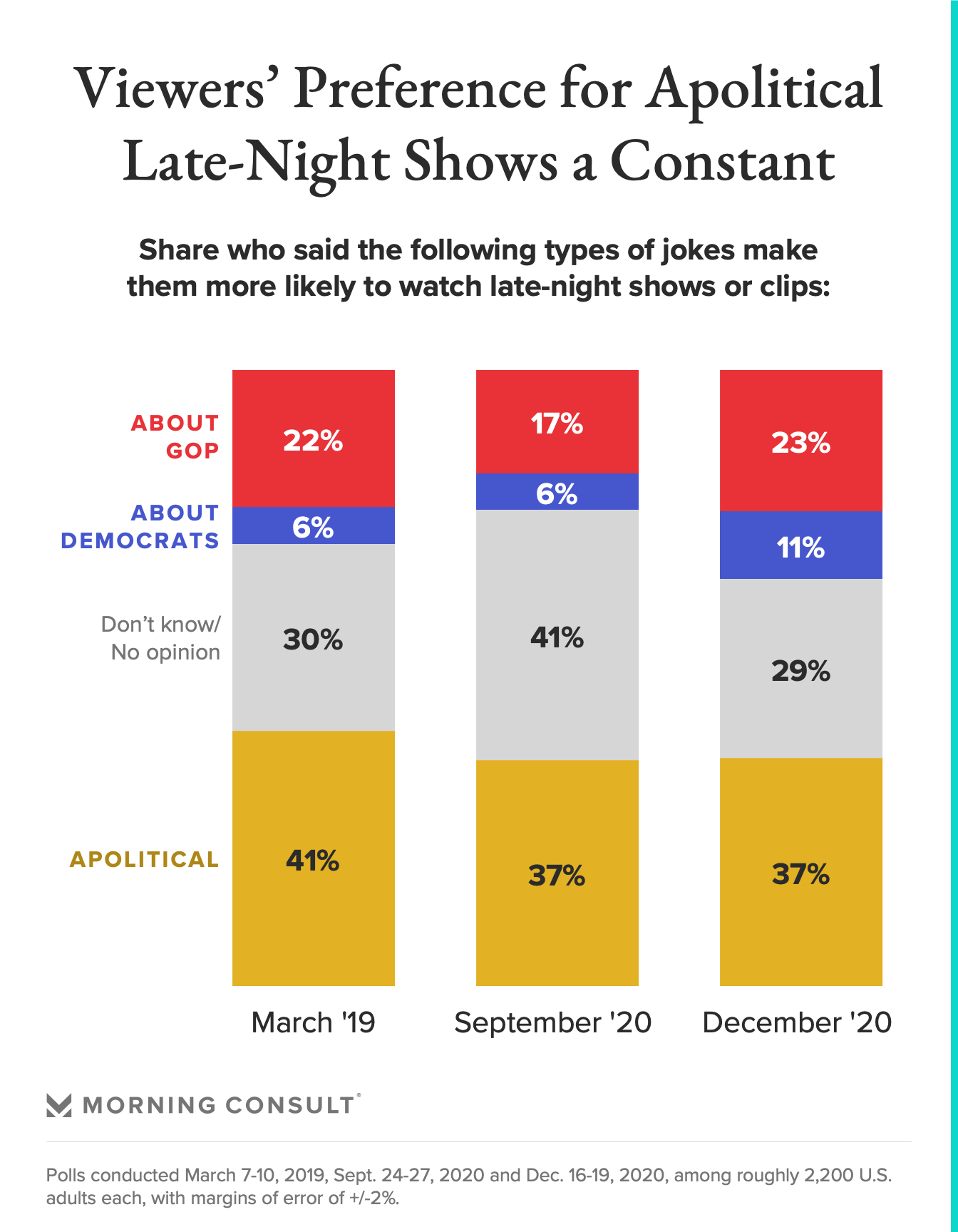 Polling has shown that viewers — regardless of their political beliefs — prefer apolitical late-night shows.

A Dec. 16-19, 2020 Morning Consult survey found that, while the majority of adults (52 percent) support late-night hosts’ right to discuss politics, a nearly equal share said they prefer to watch shows that don’t wade into the latest news in Washington. Thirty-seven percent of adults, along with about a quarter of Democrats and half of Republicans, said jokes that don’t involve politics would make them more likely to tune into late-night programs, such as “The Late Show” or “The Tonight Show.” The survey has a margin of error of 2 percentage points.

Robert Thompson, director of the Bleier Center for Television & Popular Culture at Syracuse University, said the void left by Trump’s exit might spark creativity and lead to new topics for these shows.

“This actually could be liberating for comedy,” Thompson said. “They could actually escape the incredible, gravitational pull of this monolithic story that they’ve been covering so strongly.”

While hosts like Meyers and Stephen Colbert devote significant portions of their shows to the day’s political news, two of late night’s more apolitical hosts — Jimmy Fallon and Jimmy Kimmel — are the most favored by the public.

Fallon, who caused a stir during the 2016 campaign when he playfully ruffled then-guest Trump’s hair, was the most favored overall (53 percent) and among Republicans (38 percent), while Kimmel was regarded highly among Democrats (72 percent). While Kimmel avoids deep dives into legislative minutiae, he has become more political in recent years, speaking out on issues such as health care after his son was born with a congenital heart defect in 2017. 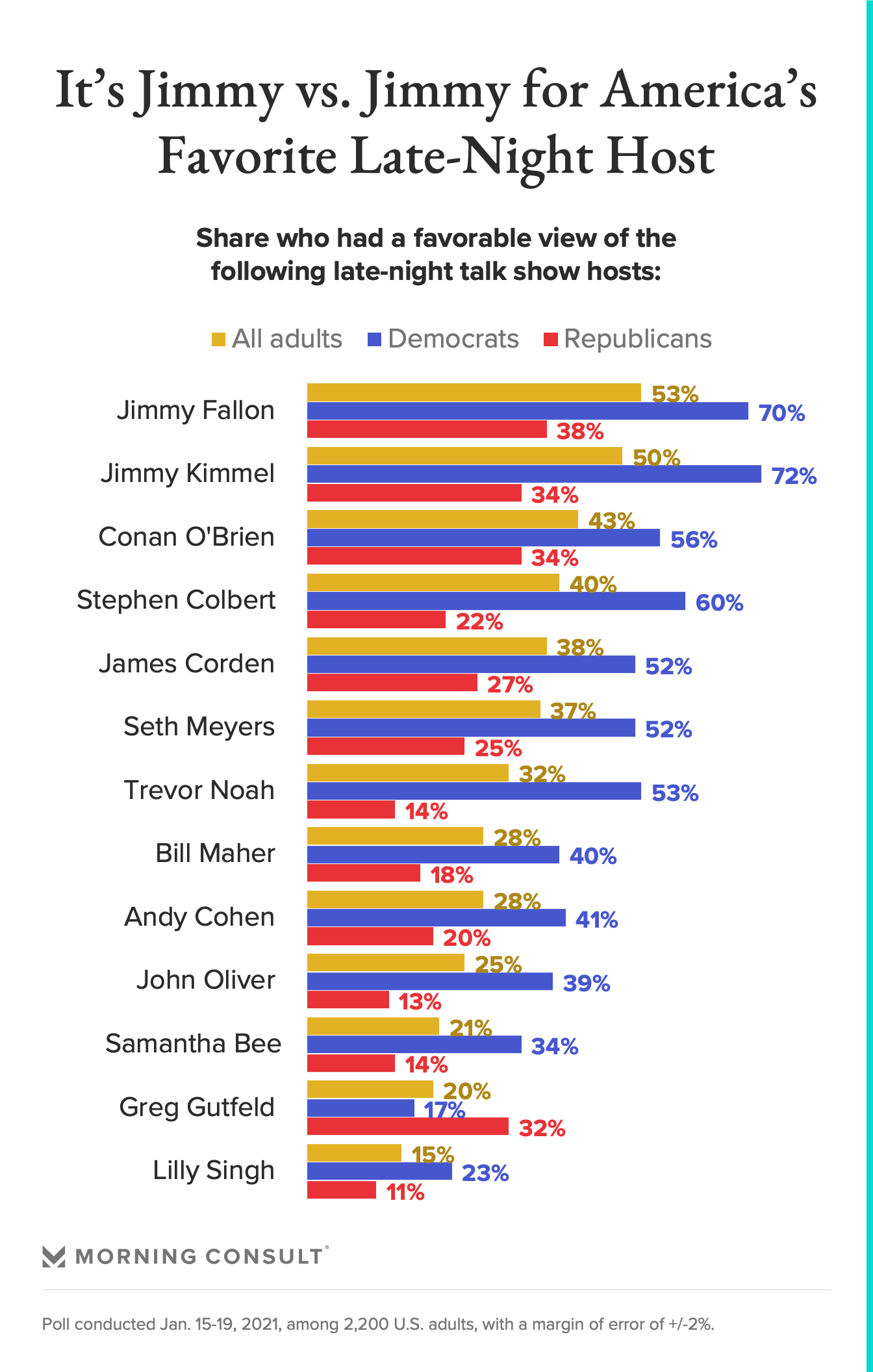 Data from Nielsen Holdings PLC shows that Fallon, once the leader in the 11:35 p.m. time slot, has slipped to third, behind Kimmel and the time slot leader, Colbert. Thompson noted that Colbert’s star on CBS began to rise when he started to get more political.

Even without Trump’s late-night-ready antics, which included looking at the sun during a solar eclipse and asking a child whether they were still a “believer” in Santa Claus, industry folks aren’t too worried about running out of material. Political satire flourished on Comedy Central, for example, in the early aughts with Jon Stewart discussing the ins and outs of Bush’s presidency, Thompson said.

Late-night programs are looking for a reprieve, though. After telling nightly jokes about Trump and his cabinet, some hosts are looking forward to delving into topics that have been largely sidelined since 2016.

“It’s an endless list of things that we want to talk about,” Camillo said in a December interview, noting that immigration policy, the Supreme Court and pay inequality are just some of the things the TBS show wants to explore.

Tom Nunan, a producer and former studio executive who teaches at the UCLA School of Film, Theater and Television, said shows will be forced to adapt in a milder political climate, citing James Corden and his out-of-studio segments like Carpool Karaoke as an example of innovation in the space.

Camillo agreed that less Trump talk will give “Full Frontal” room to expand.

“We’ve talked about, ‘Let’s do more written sketches, let’s break the format a little bit more,’” she said. “We have fun when we’re shaking things up and not making things sort of the same every week.”

And, of course, there’s still Trump himself: While his platform is shrinking, he won’t suddenly disappear.

“He will be less of a presence in American politics,” said Johanna Blakley, managing director of the Norman Lear Center at the USC Annenberg School for Communication and Journalism. “But he will remain an incredible source of comic material for years to come.”