Some of the most enduring images from last spring, as COVID-19 overwhelmed health systems around the world, came from the balconies and front stoops of New York, London, Paris and other major cities, when people emerged from their homes and applauded the efforts of health care workers battling the once-in-a-generation pandemic.

The message was clear: Health care workers were heroes, and the world was indebted to them for their sacrifices in seeing us through these dark and dangerous times.

But as the ovations waned and COVID-19 persisted, health care workers were left battling the virus with seemingly no end in sight, carrying an exhausting mental and physical burden that appears to have led to a significant share of them questioning their professional futures. 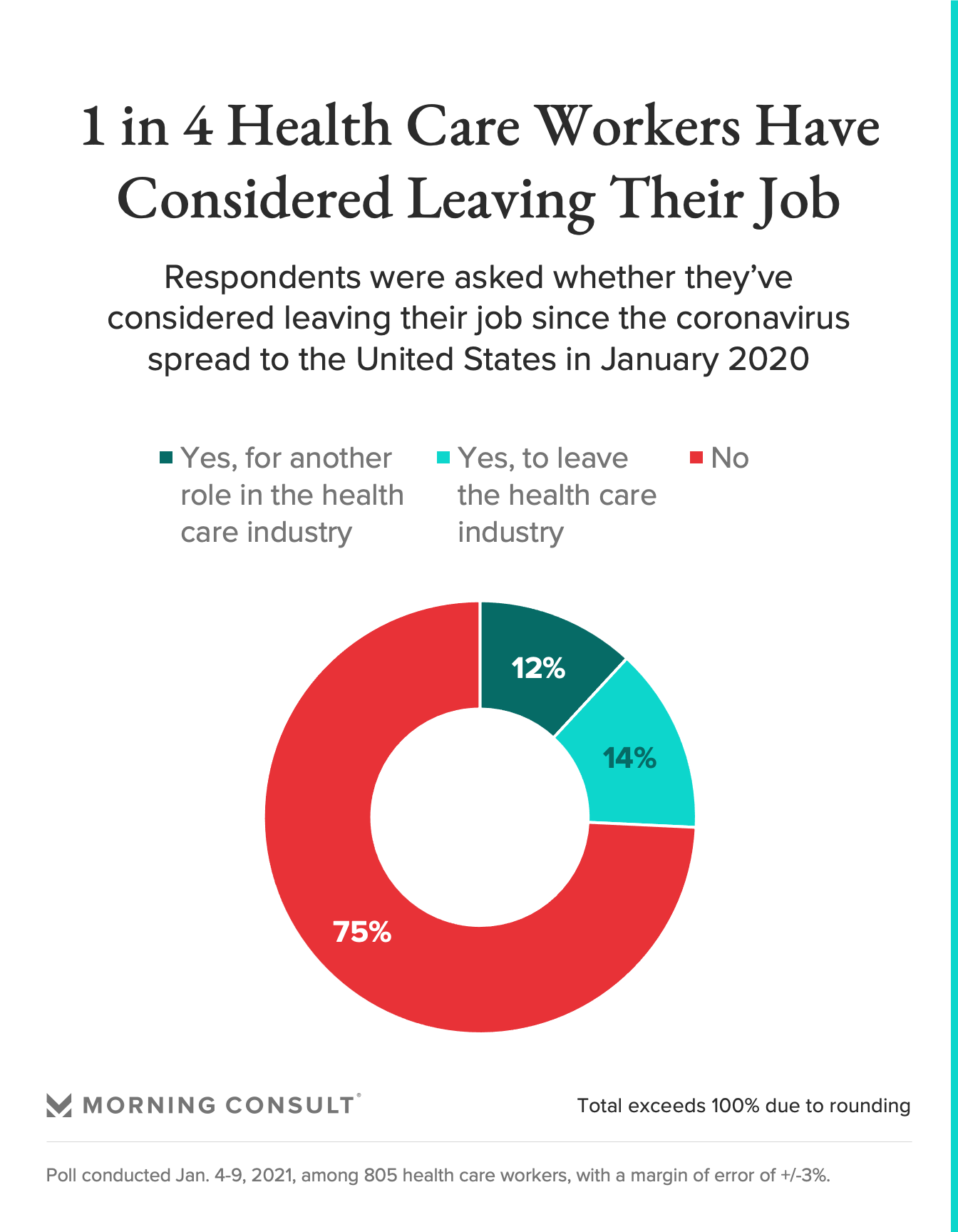 A new Morning Consult survey found that 26 percent of U.S. health care workers have considered leaving their job since the pandemic spread to the United States last January. Included in that share are 14 percent who say that COVID-19 has left them thinking that they might leave the health care profession altogether.

A notable share of the 1,000 health care workers surveyed have already exited their roles. The poll found that 11 percent have been laid off or lost their job since Feb. 15, 2020, including 5 percent because of financial constraints felt by their former employer. And another 11 percent said they resigned from their position during that time period.

The survey, which was conducted Jan. 4-9 and has a margin of error of 3 percentage points, underlines an especially stark fear among health policy experts and administrators: that looming medical staff shortages across the country, particularly in nursing, are an inexorable threat.

“It does not surprise me, but it does alarm me,” Dr. Janis Orlowski, chief health care officer at the Association of American Medical Colleges, said of the data. “After what everyone has been through so far and what we’re continuing to go through, I can see where people may just want to take a break. They say that they may want to leave the industry, and maybe what they want to do is just take a break from the intensity of the work, and hopefully they’ll come back.”

Though the share of health care workers who are thinking of leaving the industry is small, any defections would be especially damaging given widely accepted projections of staffing shortfalls.

Data from the Association of American Medical Colleges estimated that the United States could face a shortage of between 54,100 and 139,000 physicians by 2033, a projection that includes deficits in primary and specialty care.

The association’s June report also found that more than 40 percent of active physicians will be 65 or older over the next 10 years, and burnout could expedite retirements.

The nursing industry, meanwhile, has a projected employment growth rate of 7 percent from 2019 to 2029, according to the U.S. Bureau of Labor Statistics, putting it ahead of the national average of 4 percent for all occupations.

But despite those positive BLS projections, the nursing shortfall is even more pronounced than the physician deficit: A 2018 study from the American Journal of Medical Quality projected a shortage of over half a million nurses by 2030, with the southern and western regions of the country most afflicted.

“It is pretty clear that the current nurse workforce and workforce in general is inadequate. And there are significant shortages in certain job descriptions that are related to delivering respiratory care and intensive care,” said Dr. Albert Wu, director of the Center for Health Services and Outcomes Research at Johns Hopkins Medicine. “We are not well-positioned to deal with this or even the next crisis.”

Wu said that due to a variety of factors, survey results may even underestimate health care workers’ desire to leave their current jobs. For example, he said, many nurses, who represent the largest share of providers, are leaving their full-time jobs during the pandemic to work as traveling nurses for a per diem salary that is three or four times what they make now. As more nurses leave for these assignments, that increases the interest of their colleagues in these jobs.

Related: Amid COVID-19 Vaccine Rollout, a Quarter of Health Care Workers Say They Won’t Get a Shot

But if there is a silver lining to the hardships experienced by health care workers, it’s that help is apparently on the way, thanks to people who have a newfound appreciation of their work. Orlowski cited Association of American Medical Colleges data that found medical school applications are up more than 18 percent year over year. Though it will be another decade or so until these applicants are practicing physicians, the trend is promising.

Health administrators, Wu said, should at the very least come away from navigating the pandemic with lessons learned to improve the professional lives of staffers going forward.

“I would hope that the current crisis makes health care leaders and health policy leaders think harder about workforce needs for the future,” he said, “and in particular in planning for what’s inevitably going to be the next pandemic.”