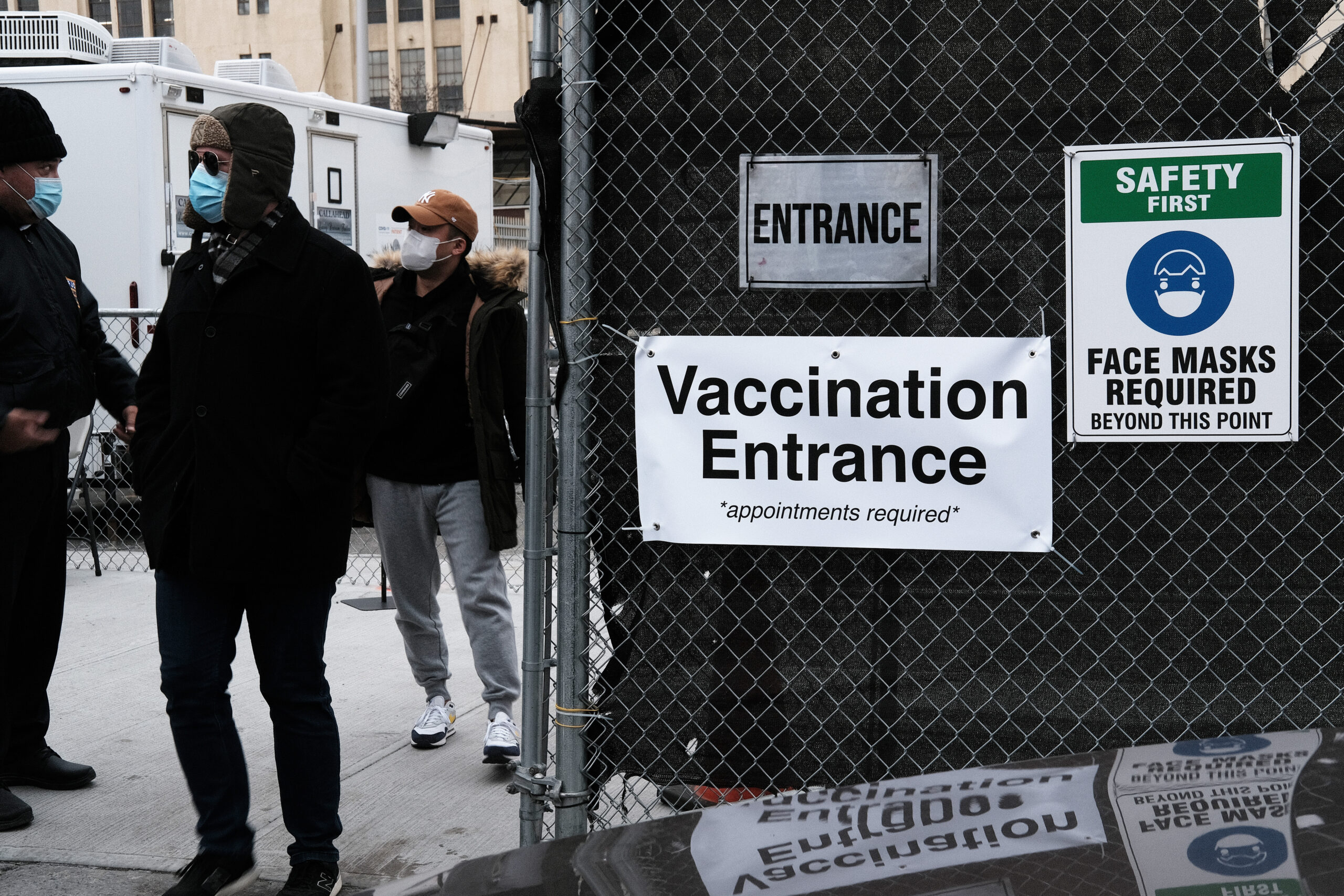 A COVID-19 vaccine hub taking appointments only stands in Brooklyn as the city begins to run low on doses on Jan. 22, 2021, in New York City. (Spencer Platt/Getty Images)
By Gaby Galvin

The public’s willingness to get a COVID-19 vaccine reached 60 percent this week for the first time since late July, amid a major uptick among Hispanic and Black adults, according to new Morning Consult polling tracking the public’s views on the pandemic. 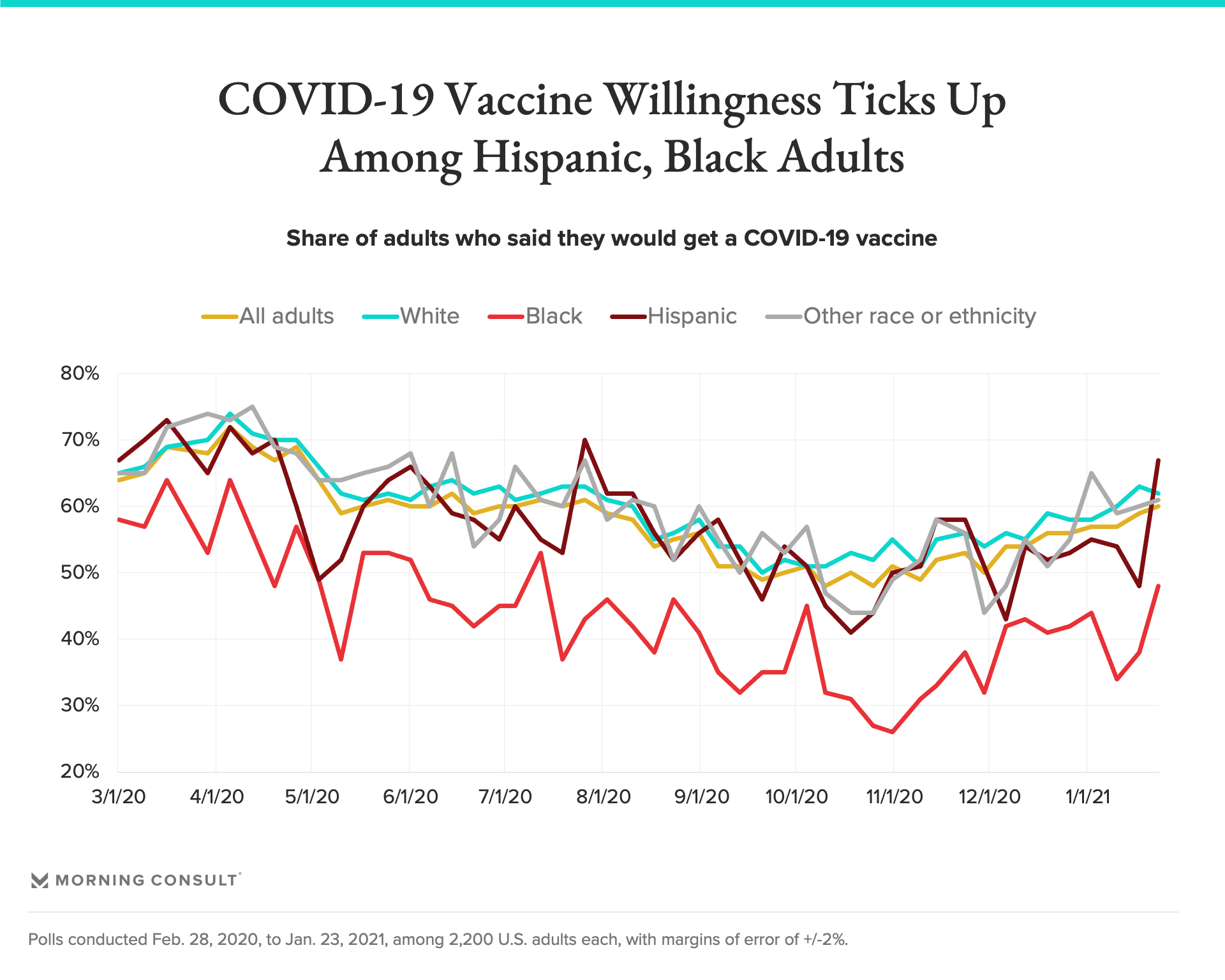 The data comes as early indicators in multiple states show that Black and Hispanic adults, who have been disproportionately affected by the pandemic, are being vaccinated at lower rates than their shares of both state COVID-19 cases and populations.

“Many of our communities are seeing family members that are gone,” said Dr. Amelie Ramirez, director of the Institute for Health Promotion Research at UT Health San Antonio. She’s also involved with a National Institutes of Health initiative to engage with Black, Latino and Indigenous communities around COVID-19.

“We really need to continue sharing this information with all population groups, but particularly where it’s hit the hardest,” she said of vaccine outreach efforts.

The latest poll data indicates 48 percent of Black adults said they’d get a COVID-19 shot, the highest level recorded since July and a 10-point uptick from the week before. Yet that share also remained lower than any other racial or ethnic group in the survey. Sixty-two percent of white adults, for example, said they would get vaccinated, as would 61 percent of adults of another race or ethnicity.

The poll, conducted among 2,200 adults, has an overall margin of error of 2 percentage points. The margins of error for Black and Hispanic adults are 6 and 5 points, respectively.

“The real issue here that we ought to pay attention to is the fact that there’s a continued distrust of leaders in the health community, and people don’t feel like they’re treated well overall,” said Dr. Georges Benjamin, executive director of the American Public Health Association, which has been working with the Ad Council on a $50 million public service campaign to promote COVID-19 vaccines.

Institutional mistrust manifests in different ways in different communities. In Latino communities, for example, immigration policies that lead people to not trust the government could translate to a lack of trust in the medical establishment, said Dr. Karey Sutton, director of health equity research workforce at the Association of American Medical Colleges.

Bridging these types of divides — which will be critical to getting most people vaccinated — will require health systems and other organizations to earn the trust of wary communities, rather than lecturing them about the importance of being vaccinated, Sutton said.

“We’re grappling with a problem, because here we have organizations and systems and hospitals that are now trying to do the work that they should have done in their local communities 40 years ago,” Sutton said.

The success or failure of such efforts will have serious implications, Benjamin said. Failure to get people vaccinated for COVID-19, he said, would be reminiscent of the Tuskegee Study, the infamous experiment in which Black men with syphilis were denied treatment for decades, which has often been cited as a source of historical distrust in government and medicine.

“That is the key here,” Benjamin said. “If people don’t get the vaccine, now that we have an effective treatment, wouldn’t we be repeating that same mistake?”