Two Weeks After Inauguration, Here’s How Voters Are Evaluating Biden’s Performance on a Variety of Issues 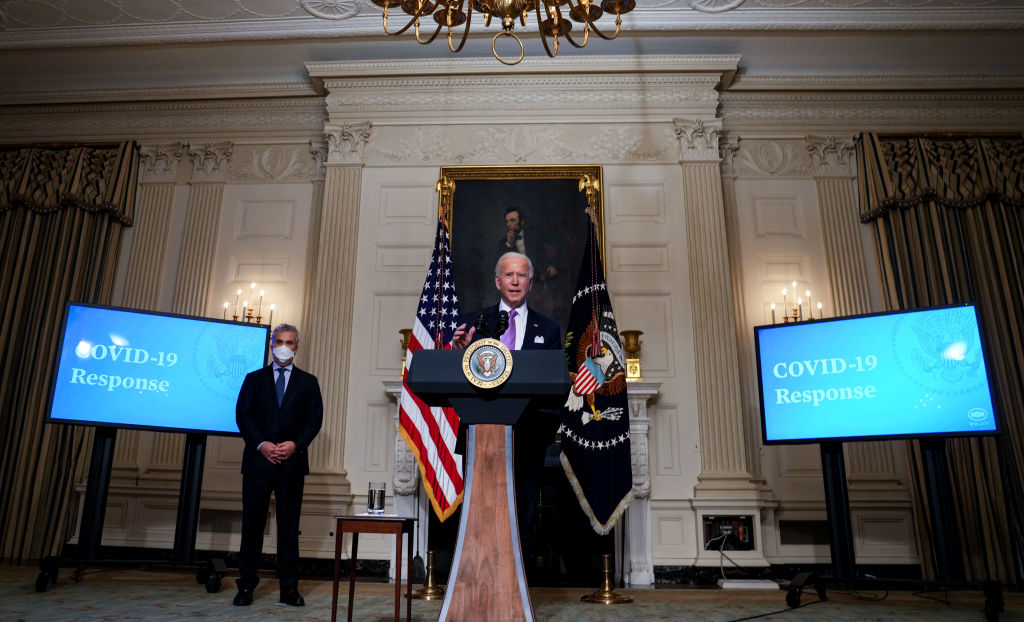 U.S. President Joe Biden speaks about the coronavirus pandemic in the State Dining Room of the White House on Jan. 26, 2021. Roughly 3 in 5 voters approve of Biden's coronavirus response, while his moves on immigration and energy policy are more controversial. (Doug Mills-Pool/Getty Images)
By Cameron Easley

With two weeks in office under his belt, President Joe Biden is getting his best marks from voters for his handling of a number of pressing topics, including COVID-19 and the economy, while his moves on immigration, energy and foreign policy are proving more divisive.

A new Morning Consult/Politico poll shows 3 in 5 registered voters approve of the 46th president’s handling of the coronavirus, with slim majorities also backing his handling of the economy, health care, Social Security and Medicare and climate change and the environment. 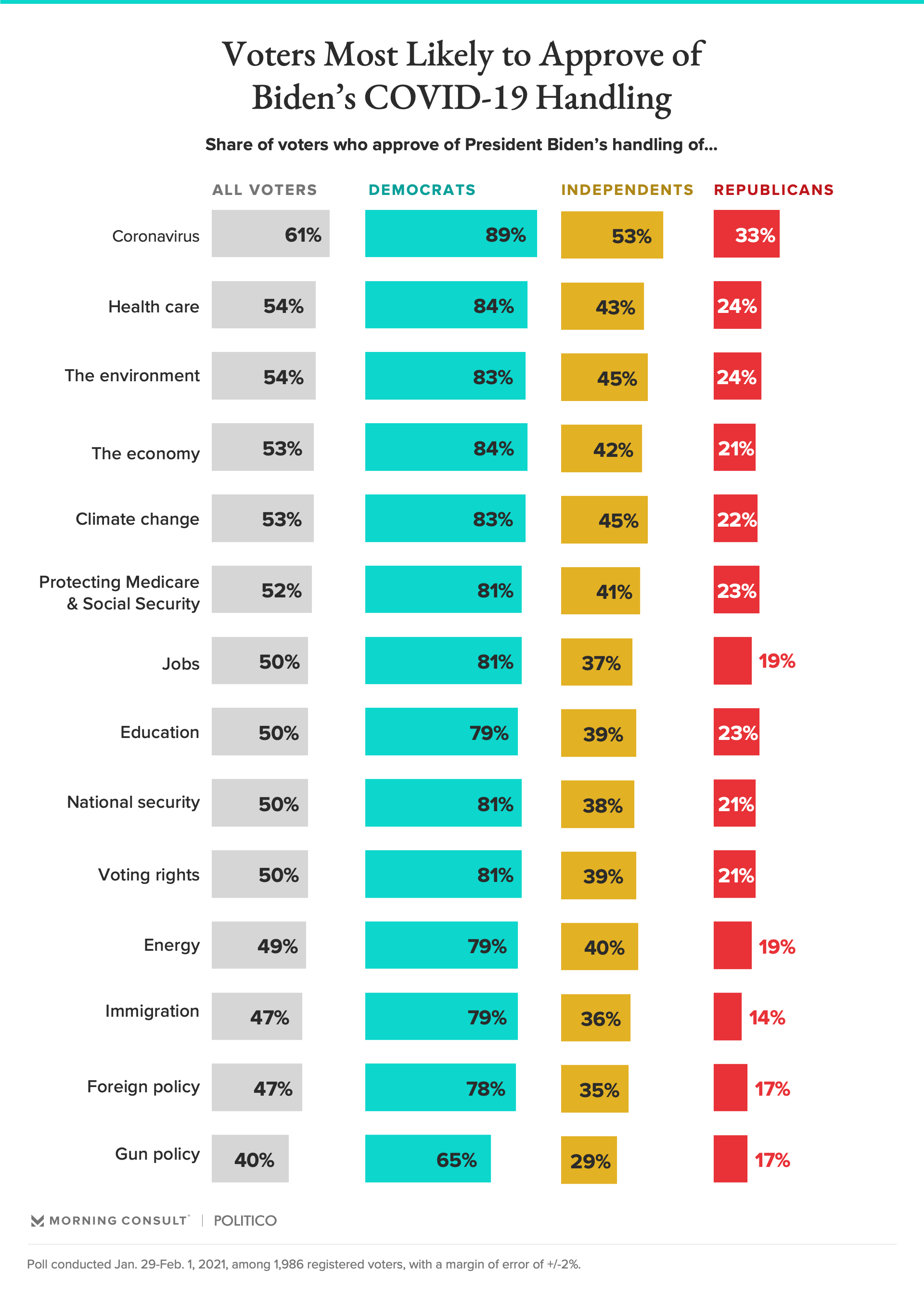 Of the 14 issues that Morning Consult will be tracking regularly for the next four years, Biden’s approval rating was below the 50 percent mark for just four of them: energy, immigration, foreign policy and gun policy.

Roughly 4 in 5 Democratic voters backed Biden’s handling of all the topics listed in the survey, with the exception of gun policy, which drew approval from 65 percent of the voters who identify with the president’s party.

Both Republicans and independents graded Biden most positively for his response to the coronavirus, followed by his handling of health care and the environment, though independents were generally more supportive than GOP voters of his performance.

The poll was conducted Jan. 29 to Feb. 1 among 1,986 registered voters, with a margin of error of 2 percentage points.

The findings largely dovetail with evaluations of the executive actions taken so far by the 46th president, who continues to enjoy support from most voters despite a rise in his overall disapproval rating since he took office.

Morning Consult has tested voter sentiment toward roughly two dozen actions issued by Biden since his Jan. 20 inauguration. A review of the responses shows Americans are most likely to support moves to stem the health and economic fallout from the coronavirus.

Orders mandating the wearing of masks on public transit or federal property were backed by more than 3 in 4 voters, while the reinstatement of travel restrictions for non-U.S. citizens in foreign countries as well as extensions of an eviction moratorium and a freeze on federal student loan payments drew backing from nearly 7 in 10 Americans.

Biden’s move to reverse a Trump administration order banning transgender people from serving in the military — an executive action that, at 32 percent, topped the list of news in the poll that voters said they had read, heard or seen “a lot” about — was backed by 53 percent of voters and opposed by a third. 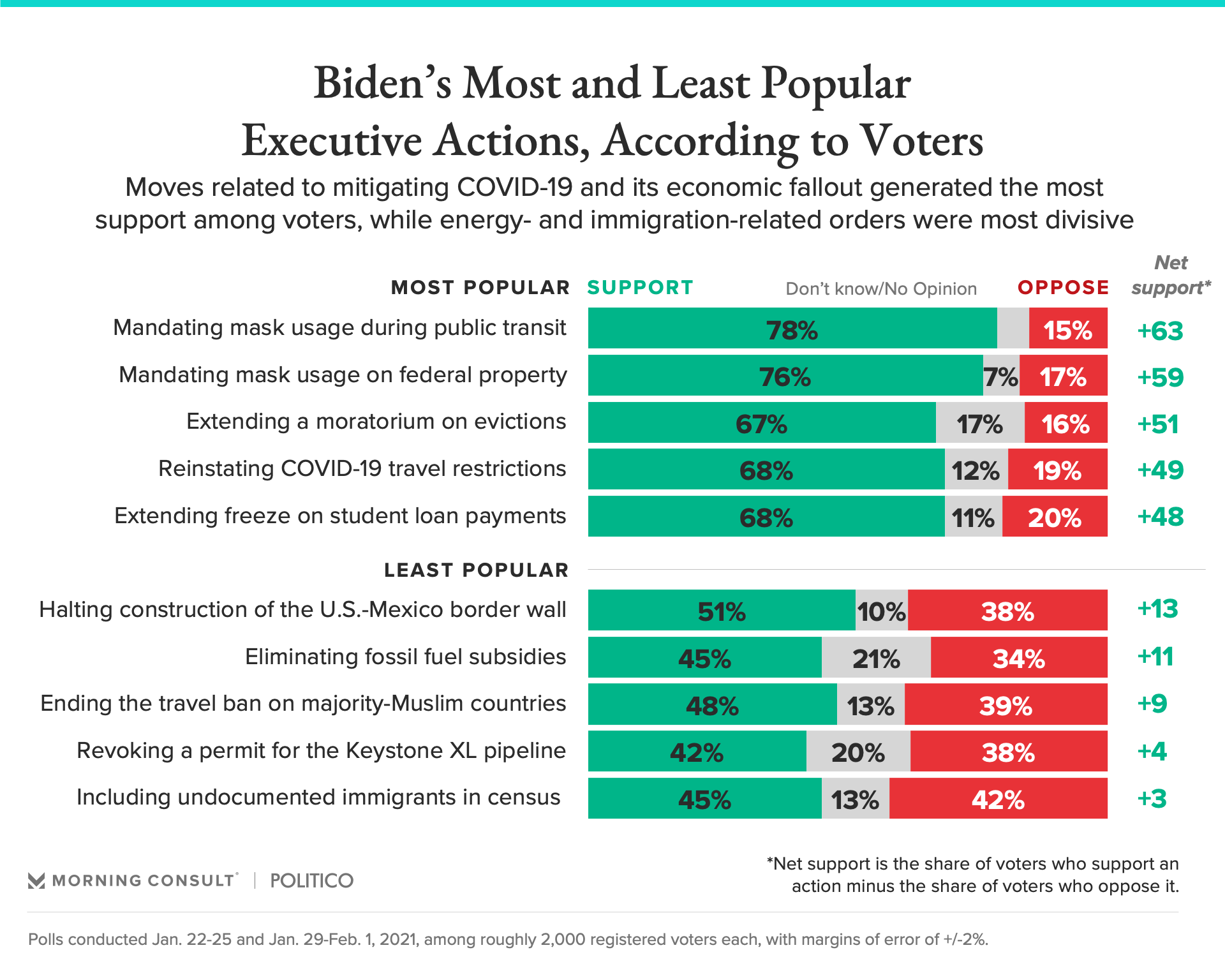 Several actions related to immigration and energy policy were decidedly more divisive, with Republicans in particular more likely to oppose Biden’s moves to end the Trump administration’s ban on travel from several predominantly Muslim countries, include undocumented immigrants in the census count and revoke the permit for the Keystone XL pipeline.

Though Biden’s approval rating — which is higher than his predecessor ever managed — has held steady among voters since he was sworn into office on Jan. 20, according to Morning Consult Political Intelligence’s daily tracking of thousands of registered voters nationwide, opposition to his presidency has risen during that time. 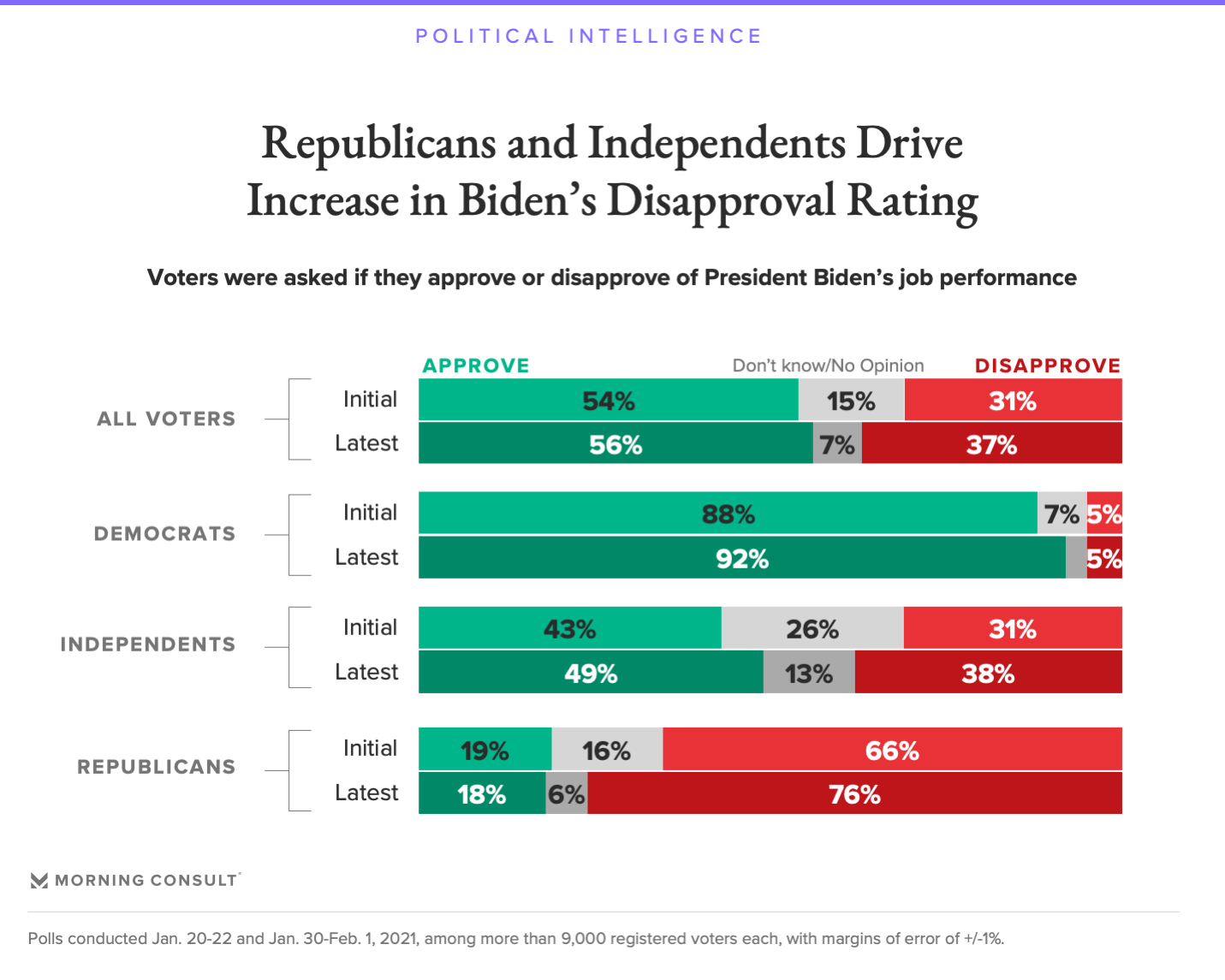 According to the latest tracking of 14,239 responses gathered Jan. 30 through Feb. 1, 37 percent of voters disapprove of the job Biden is doing as president, up 6 points from Jan. 20-22 polling.

That uptick in disapproval was driven by Republicans and independents, who have grown increasingly negative on Biden’s job performance by a respective 10 and 7 points.

Correction: A previous version of this story misstated when the poll began fielding.