Despite steady drop since mid-May high, the Democratic governor is still more popular than he was about a year ago 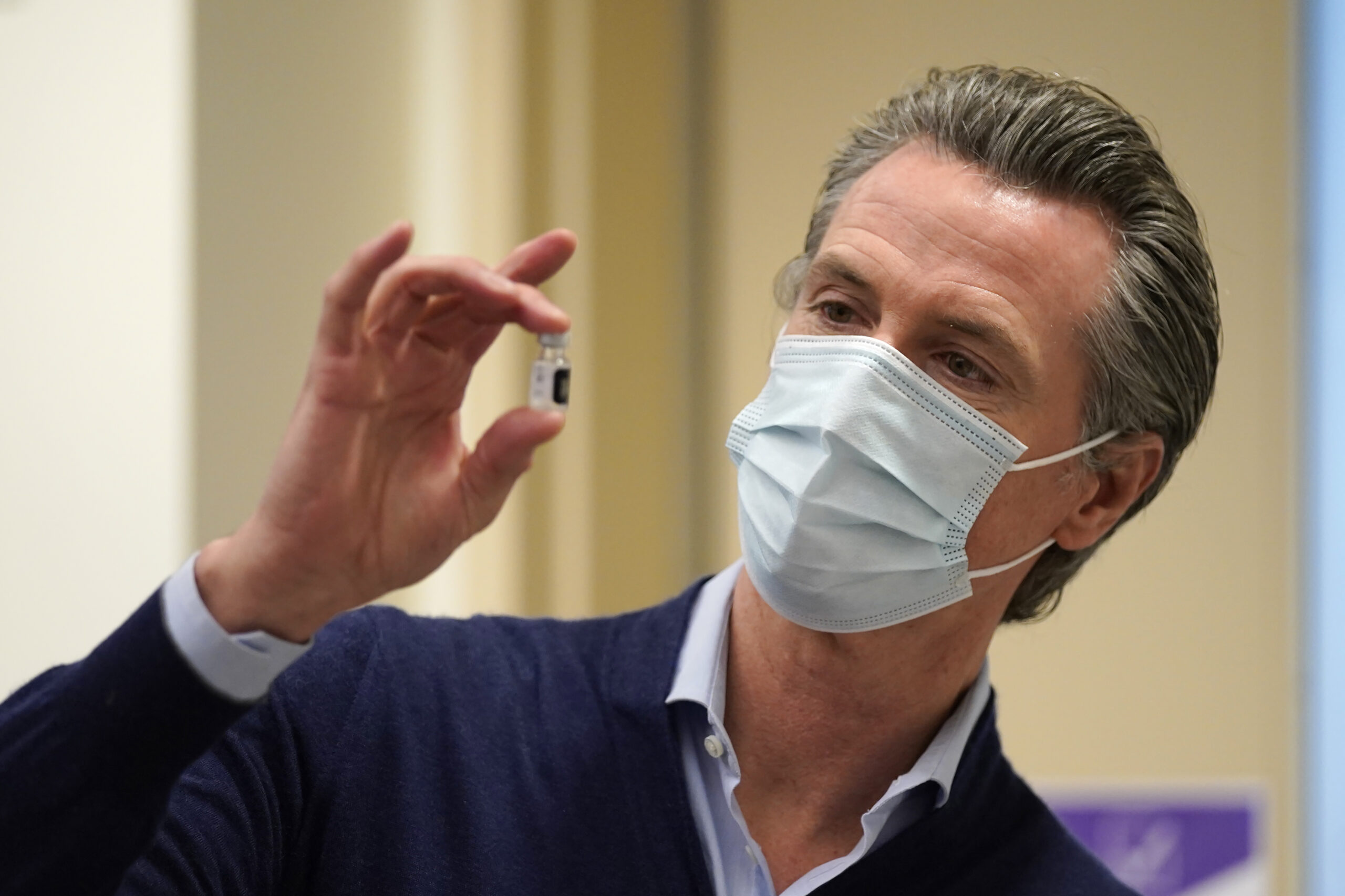 Gov. Gavin Newsom (D-Calif.) holds up a vial of the Pfizer-BioNTech COVID-19 vaccine at Kaiser Permanente Los Angeles Medical Center on Dec. 14. While Newsom has seen his approval rating decline precipitously over the past several months, he is still more popular than he was before the coronavirus pandemic took hold of the country. (Jae C. Hong-Pool/Getty Images)
By Eli Yokley

Gov. Gavin Newsom (D-Calif.) is facing a growing recall effort led by Californians with an assortment of grievances about his work shepherding America’s largest state through struggles with the health and economic impact of the COVID-19 pandemic.

But while Morning Consult Political Intelligence tracking shows the first-term governor’s  approval rating has declined precipitously from the heights it reached by the middle of 2020, he is still more popular with California voters than he was a year ago as he prepares for the fight.

The latest surveys, conducted from Dec. 29 through Jan. 28 among 9,245 registered Golden State voters, found 51 percent approve of Newsom’s job performance, while 39 percent disapprove. The approval rating marks a 16 percentage-point drop from a high in Morning Consult polling set in the middle of May, but is still superior to his standing at any point prior to the pandemic since he took office in January 2019.

Newsom’s best showing came in mid-May as California was avoiding the large numbers of COVID-19 cases plaguing populous states like New York and Florida, and was driven by upticks from voters on both sides of the partisan aisle.

According to responses gathered from April 15 through May 14, Newsom’s job approval rating improved 33 points among Republicans (to 52 percent) from earlier in the year. He saw smaller, but still substantial, upticks of 25 points among independents (to 56 percent) and 17 points among Democrats (to 85 percent) over that same time frame. 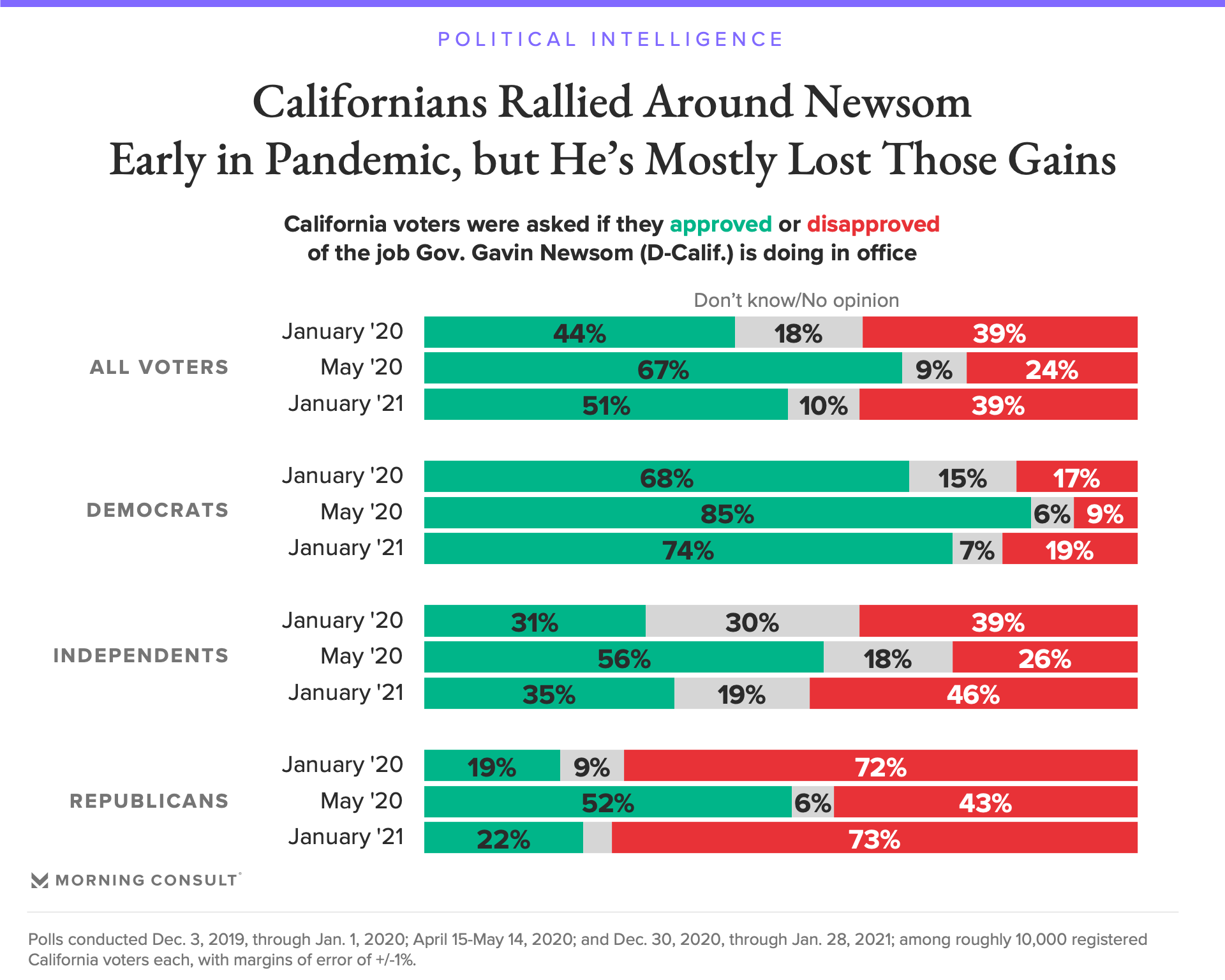 But what bipartisan rallying around the flag giveth, it can also taketh away: Over the more than eight months that followed, as California dealt with a surge in COVID-19 cases and economically damaging lockdowns — along with an embarrassing incident when he was caught maskless in close contact with others at a private French Laundry dinner — Newsom lost nearly all of his double-digit improvement among Republicans. He began February only slightly better off than he was a year ago among Democrats and independents. 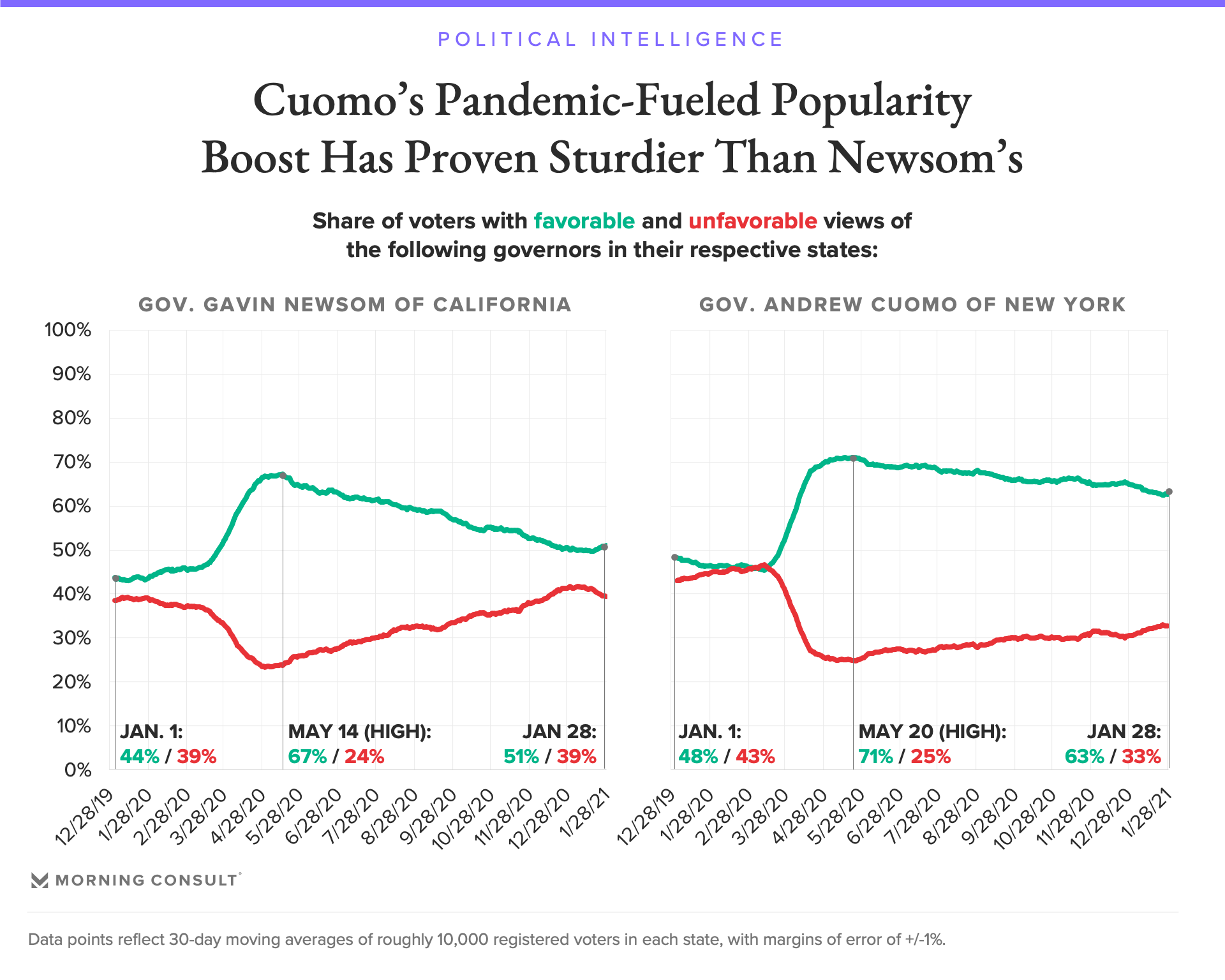 According to surveys of voters in the Empire State – the early epicenter of the pandemic in the United States – Cuomo’s job approval rating rose 23 points from the beginning of 2020 to mid-May, to 71 percent. In the months since, his approval rating dropped to 63 percent, according to the latest surveys – still a double-digit improvement from a year ago and some of his best numbers since April 2017, at the dawn of Donald Trump’s presidency.

Cuomo’s job approval rating is on stronger footing with Democrats in New York than Newsom is in California, 86 percent to 74 percent. The latest surveys also found 49 percent of independents in New York approve of their governor, as well as a third of Republicans, both up since the beginning of 2020.

Each of the samples described in this story were gathered among roughly 10,000 registered voters in each state, with 1-point margins of error.