Does the NFL Still Have a Political Problem? Republicans Less Likely Than Democrats to Watch Super Bowl 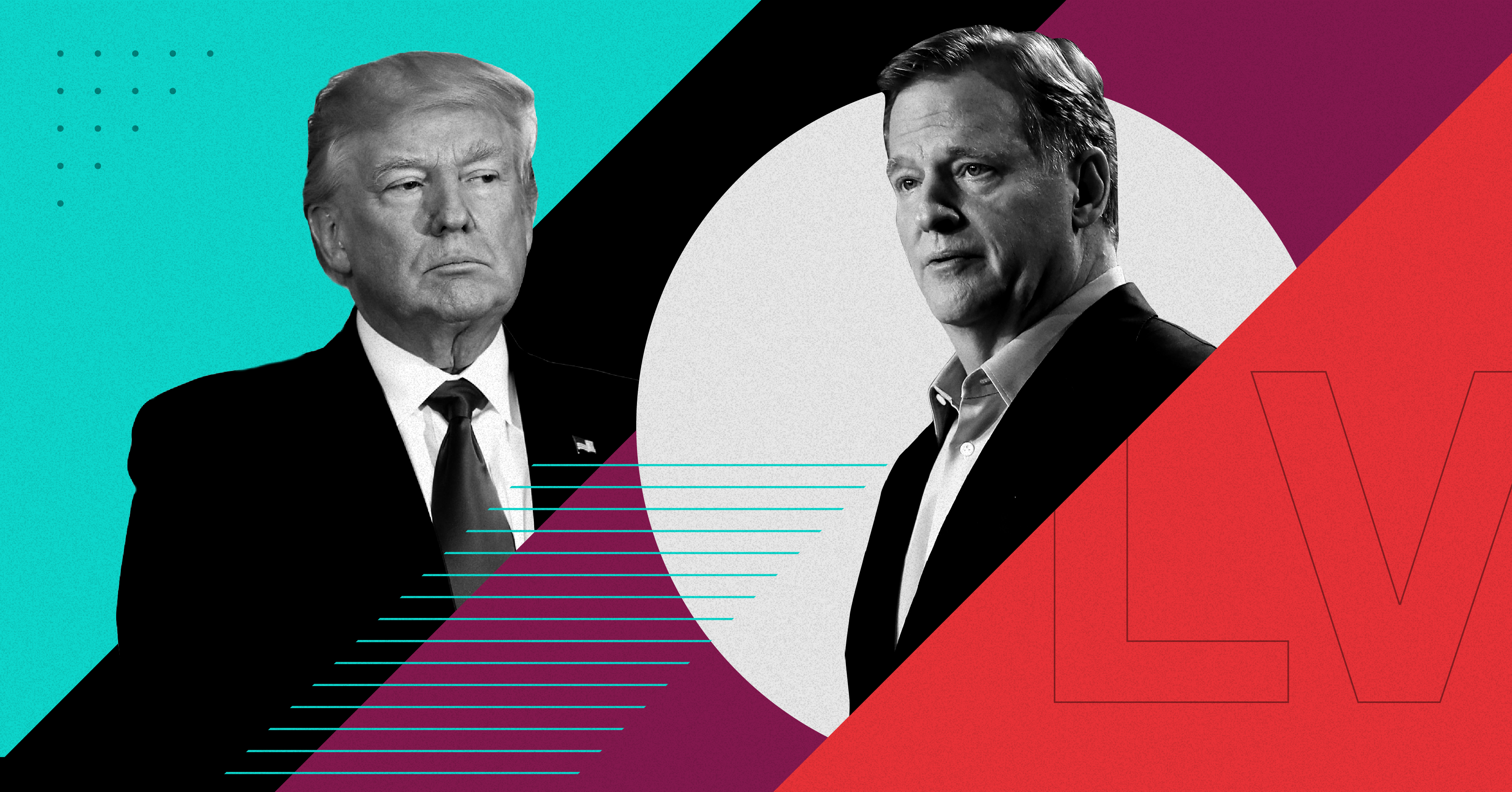 Despite both Super Bowl LV contenders hailing from states that backed Donald Trump in the 2020 presidential election, and Tampa Bay Buccaneers quarterback Tom Brady’s ties to No. 45, Republicans are less likely than Democrats to watch Sunday’s game, according to pregame polling data.

It’s the latest sign that, after years of regaining their affection, the NFL has once again fallen out of favor with the party of Lincoln.

In a Morning Consult poll conducted Jan. 25-26, 59 percent of Republicans said they were likely to tune in this weekend, 10 percentage points less than the 69 percent of Democrats who said they expected to watch. The gap in expected viewership this year is far larger than prior to each of the past two Super Bowls and comes in the wake of a season during which members of the GOP turned on the league due to its embrace of social justice activism. 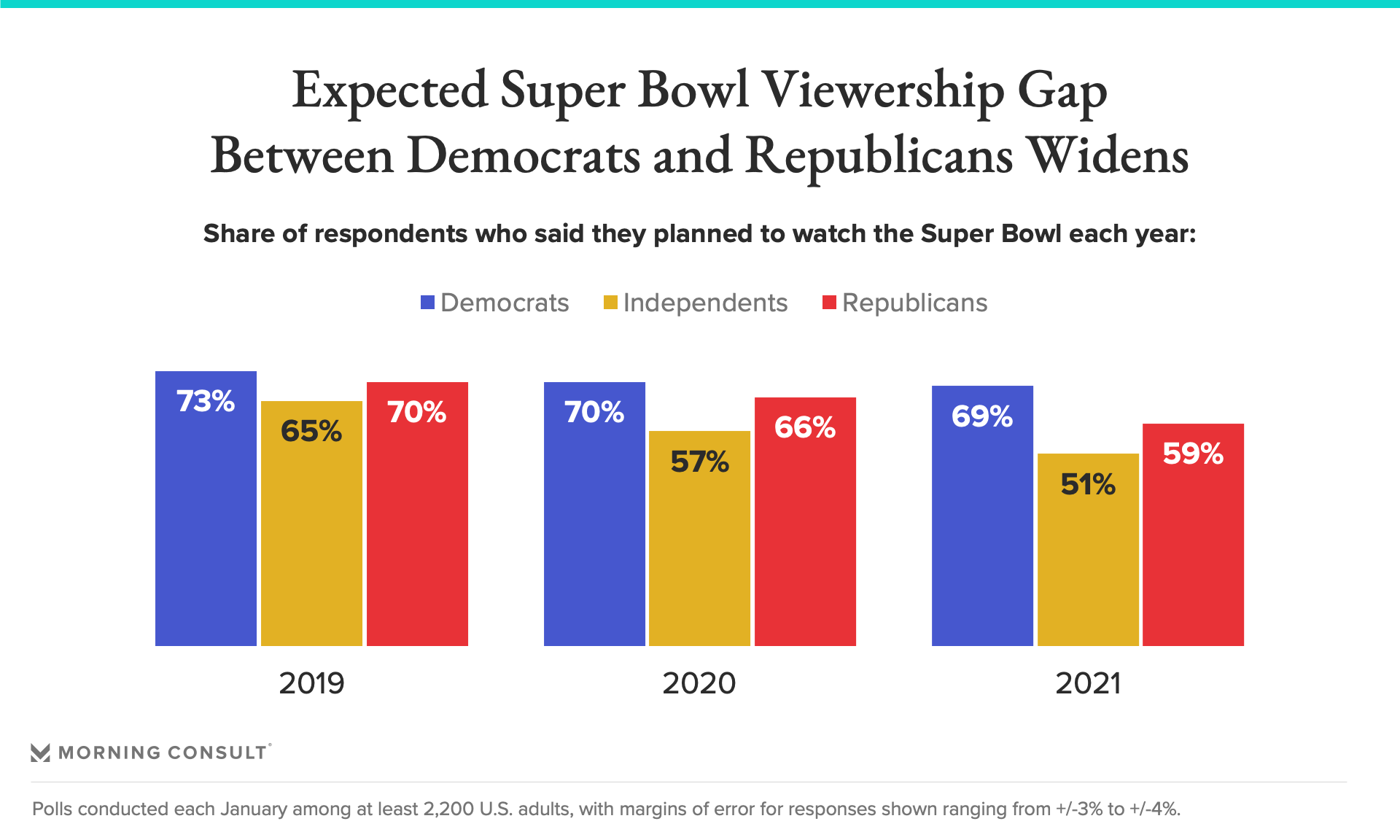 Morning Consult Brand Intelligence data indicates that, in February 2020, positive sentiment among U.S. adults toward the NFL reached its highest point since August 2017, the month before Trump launched the opening salvo in a nationwide culture war over players’ on-field protest against racial inequality and police brutality during the national anthem. The platform gathered more than 320,000 interviews with U.S. adults about their views of the NFL between February 2017 and February 2020.

In May, the league’s net favorability rating — the percentage of adults with a favorable opinion of the league minus the share with an unfavorable opinion — among Republicans ticked up to 39 points. It also marked the first time since before the Trump-fueled controversy that Republicans and Democrats held the NFL in nearly the same regard, the truest indication that the league had freed itself from the grip of partisanship. 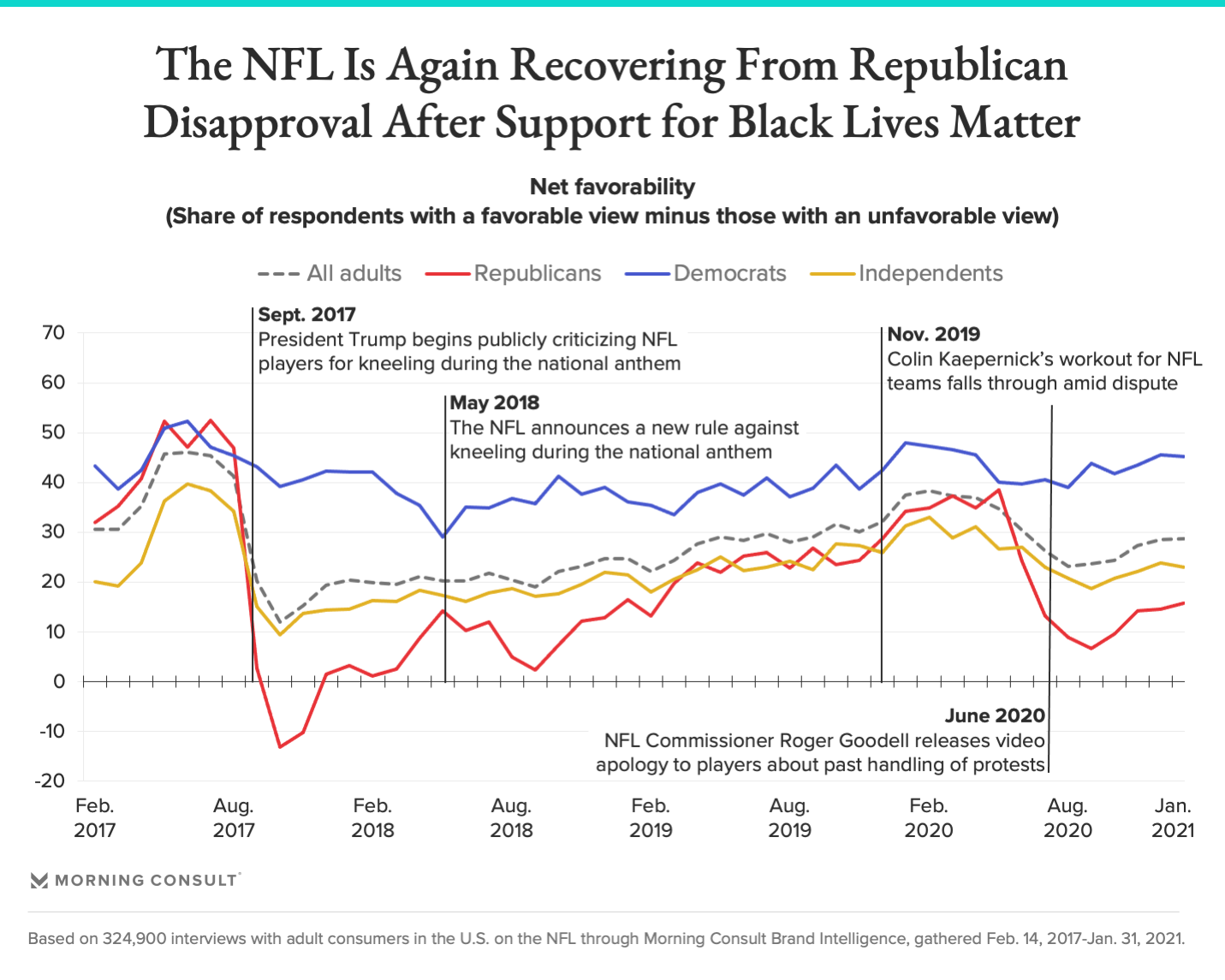 The league’s response to the late May killing of George Floyd by a Minneapolis police officer, however, once again made it a Trump Twitter target. On June 5, Goodell released a video apologizing to players for “not listening to NFL players earlier” about systemic racism and police brutality, and throughout the summer, new social justice demonstrations planned for the 2020 season emerged, including the stenciling of “End Racism” on the field.

By the time this season started, the league’s net favorability rating among Republicans had fallen below 10 points for the first time in more than two years. In September, sentiment among members of the GOP hit its lowest point in more than two years. Opposition to the NFL’s efforts were on full display Sept. 10, the 2020 regular season’s opening night, when fans at the Kansas City Chiefs-Houston Texans game booed a pregame moment of silence dedicated to the “fight for equality.” 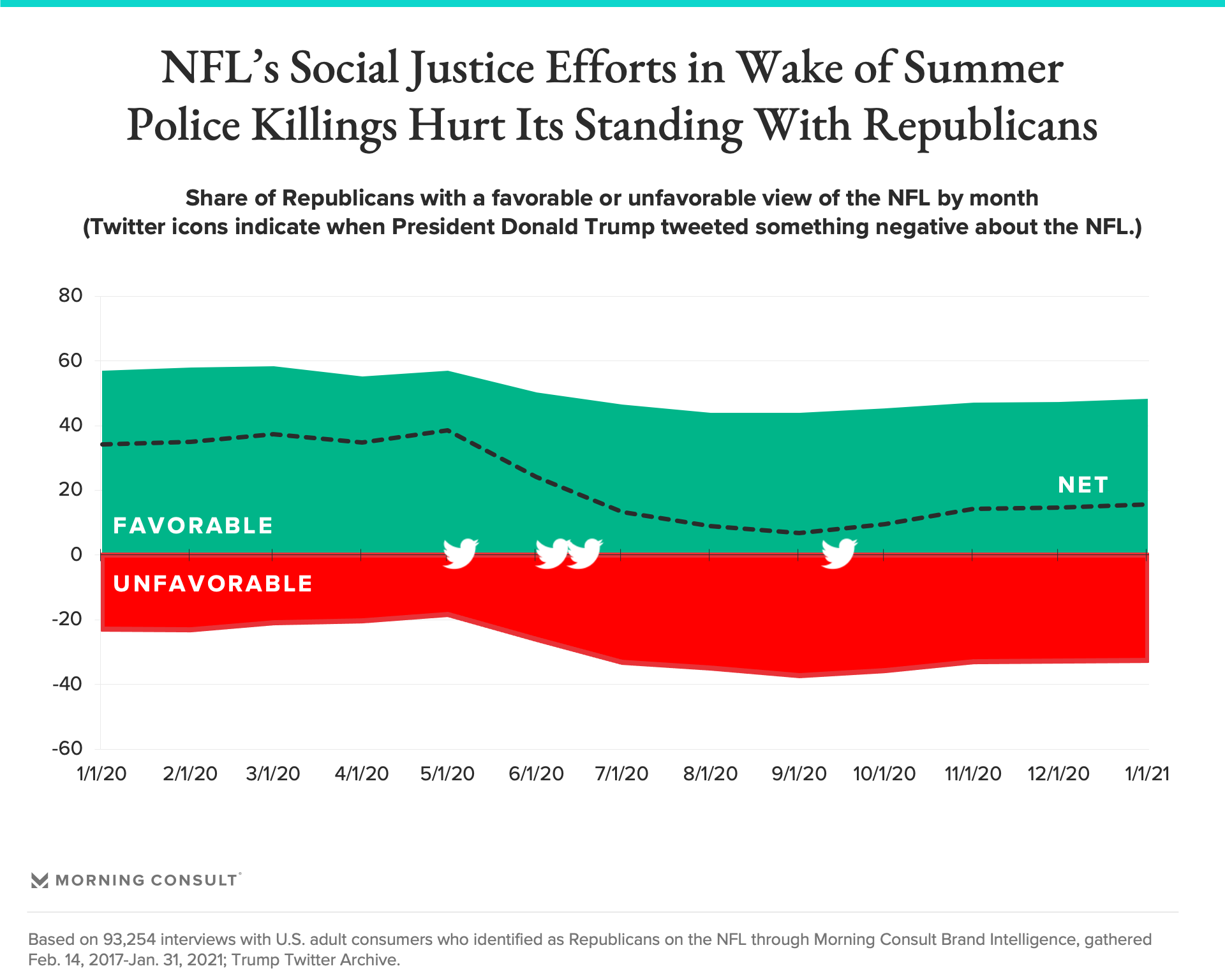 With pre-election coverage in full swing and sports audiences down across the board, the NFL experienced a 10 percent decline in viewership through the first four weeks of the season. In a Morning Consult poll conducted Sept. 30-Oct. 2, 41 percent of Republicans said they were watching the NFL less often than in previous years. Among all adults who said they were tuning out, 35 percent said the league’s social justice demonstrations were “a major reason.”

By the end of the regular season, NFL viewership was down 7 percent, according to the league, though a Hollywood Reporter review of Nielsen ratings found viewership down about 10 percent.

Sentiment toward the NFL among political independents followed a similar trajectory during the second and third quarters of 2020, but didn’t dip as low, while support among Democrats remained fairly steady.

But with Trump out of office and banned from Twitter, the NFL could find itself in the crosshairs of his loyal base less frequently moving forward.