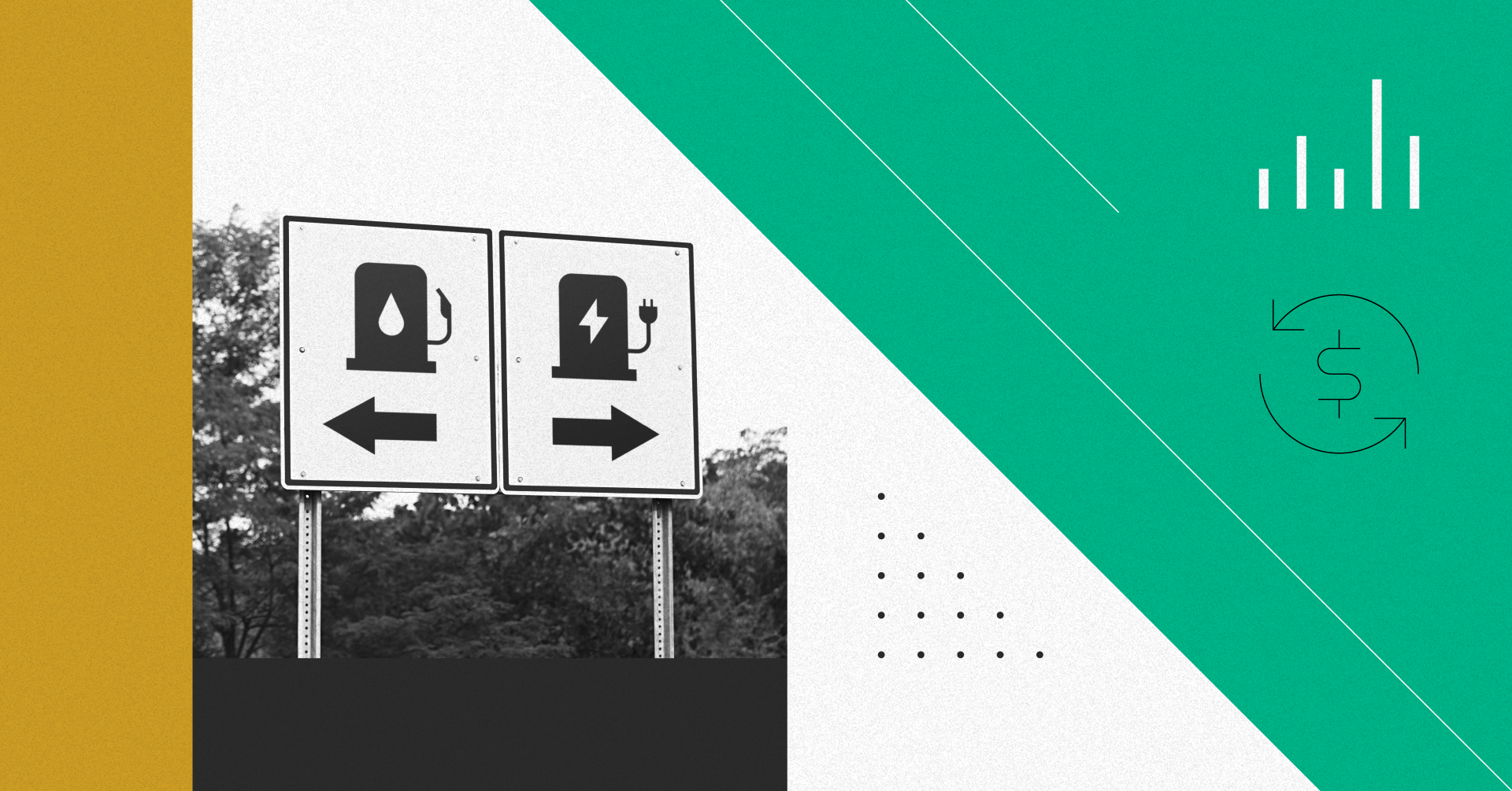 Skepticism about charging infrastructure remains a hurdle for the country’s transition to electric vehicles, according to new Morning Consult polling, though consumers’ interest in EV models is growing slowly but surely.

A Jan. 22-25 poll found that the share of U.S. adults who say they are likely to purchase an EV in the next decade (39 percent) is up 6 percentage points since March 2019. Meanwhile, the share of those who say they are unlikely to do so is down to 49 percent from 56 percent. Interest in hybrids has remained steady during the same period. 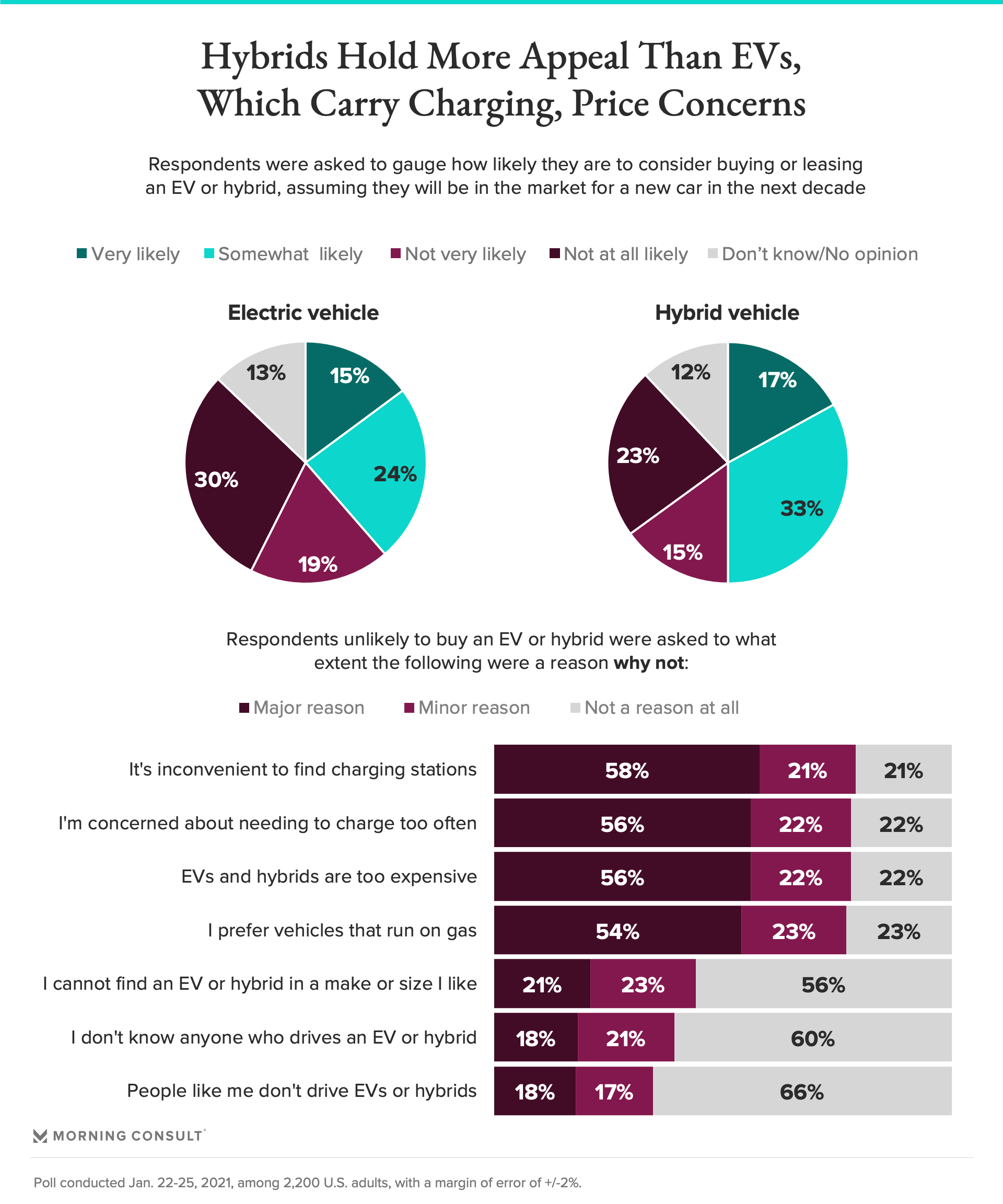 Infrastructure chief among a slate of concerns

For the EV holdouts, concern about charging infrastructure is the chief cause of their reluctance, the survey responses show.

Concerns about both price and range of the vehicles were also cited as primary concerns, but the inconvenience of finding local charging stations topped the list of reasons why people said they would not consider switching in the next decade, with 58 percent saying it is a major reason and 21 percent saying it is a minor reason.

“I will not consider such a purchase unless and until recharging locations are as common as gasoline stations in the US,” one respondent wrote, after being prompted to expound upon their reasoning.

“What if I run out of battary [sic] in an electric car? Then what happens? What can I do?” said another, underlining a sense of alarm many respondents raised at the prospect of moving away from a tangible fuel source (the possibility of conventional cars running out of gas notwithstanding).

However, these worries may soon be assuaged. President Joe Biden has said he intends to make public investments in 550,000 EV charging cords, roughly quintupling the nation’s infrastructure to the tune of more than $5 billion.

Meanwhile, it seems a public education campaign of sorts is underway about the virtues of EVs, with General Motors Co. airing a celebrity-studded EV commercial during Super Bowl LV, potentially targeting the number of respondents who wrote that they do not know enough about EVs to consider switching.

And while nearly half the respondents said that they are unlikely to make the switch in the next decade given the current market, if money were no object and charging stations were plentiful, many of these skeptics said they would be converted. Given those conditions, 63 percent said they would likely consider an EV or hybrid vehicle.

However, just over 1 in 5 adults say they would never switch: a group of holdouts that might cause a wrinkle in the Biden administration’s vision of an electrified transportation sector.

Of course, the impact of transitioning the nation’s vehicle fleet to EVs is more complicated than the anticipated emissions reductions; plugging millions of vehicles into the grid will mean increased electricity use and potentially even a strain on communities’ electricity supply. However, new data indicates that electricity demand might be lower than one might think.

A working paper published this month by the National Bureau of Economic Research found that home charging for EVs increases the average household electricity load in California by 2.9 kilowatt-hours per day, or approximately the amount used by drying a load of laundry. This is less than half the amount state regulators have assumed previously. The researchers concluded that this means EV owners travel approximately 5,300 miles per year, which is under half the U.S. fleet’s average.

Meanwhile, the Biden administration has moved to decarbonize the power sector at the same time as the transportation sector, which could potentially mean that as more cars rely on the grid rather than fossil fuels, that grid will in turn rely on renewables or other non-fossil-fuel sources as well. (However, most of the nation’s major utilities are behind on the progress that would be necessary to meet these goals, recent research has shown.)

And the push for decarbonization is something that nearly half of the public is willing to undertake on their own properties. Asked if they currently use solar panels or other renewable resources to produce electricity in their home, just 7 percent of adults said yes, but an additional 38 percent said they are considering doing so in the next decade.

Those who make less than $50,000 annually were nearly 20 points more likely than respondents who earn over $100,000 annually to say they wouldn’t consider installing renewable infrastructure, at 61 percent and 42 percent, respectively.