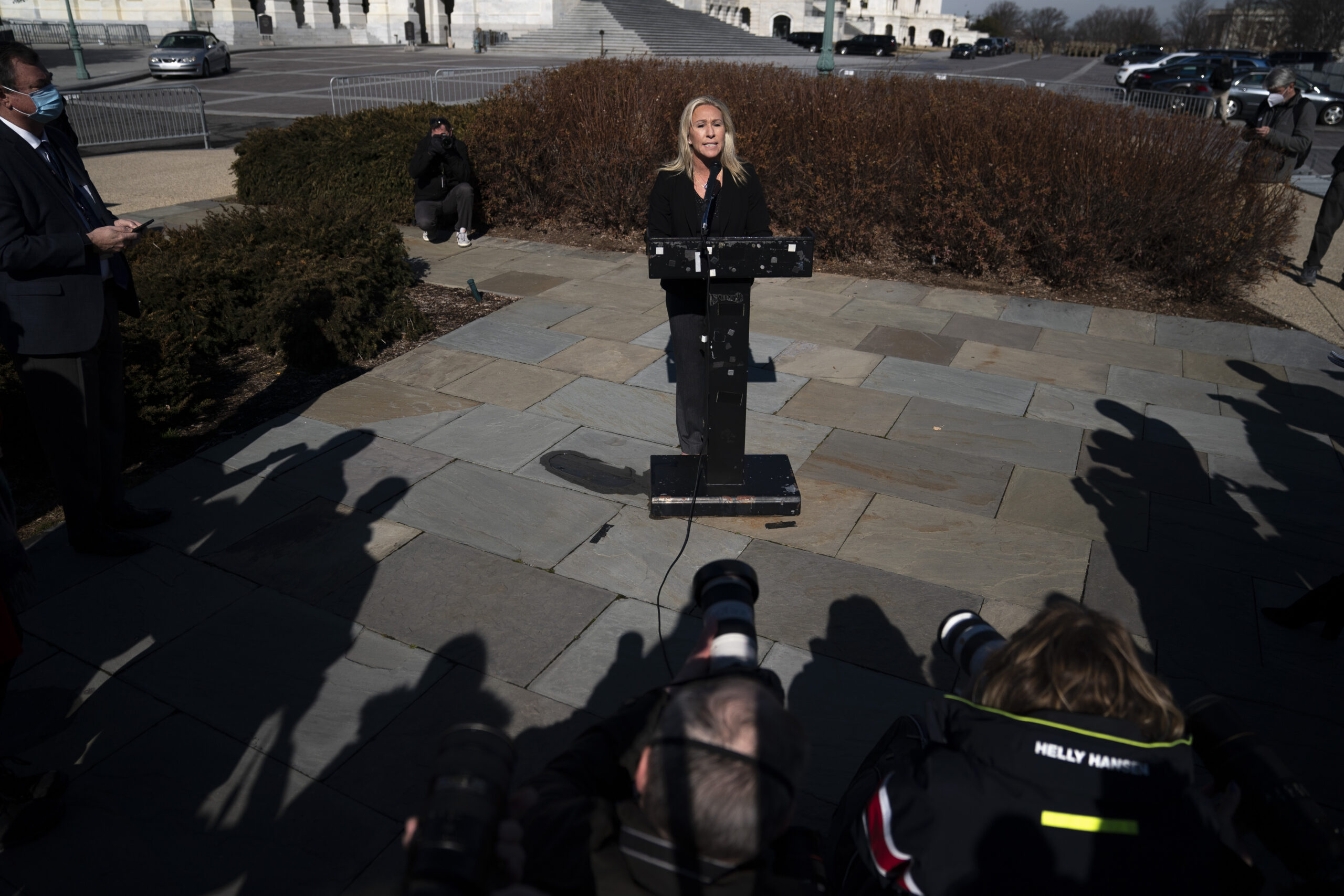 Rep. Marjorie Taylor Greene (R-Ga.) speaks during a press conference outside the U.S. Capitol on Feb. 5, 2021 in Washington, D.C. Greene's profile has risen since losing her committee assignments, with the share of voters with an opinion of her rising 13 points in a week. (Drew Angerer/Getty Images)
By Eli Yokley

If the Capitol Hill showdowns over the statuses of Rep. Marjorie Taylor Greene (R-Ga.) and House Republican Conference Chair Liz Cheney served as a window into the larger issues facing the Republican Party, the Wyoming Republican who successfully fended off a leadership referendum may have won the battle, but polling shows the controversial freshman from Georgia is taking ground in the larger war.

Compared with Morning Consult/Politico polling conducted a week ago – before Cheney easily overcame an attempted ouster by conservative House Republicans triggered by her vote to impeach former President Donald Trump, and before Democrats forced Greene’s removal from two House committees over past conspiratorial social media posts – a new survey finds that the Georgia Republican has seen awareness of her grow nationwide, driven in part by a double-digit favorability boost among Republican voters. The latest poll, conducted Feb. 5-7 among 1,986 registered voters, has a margin of error of 2 percentage points. 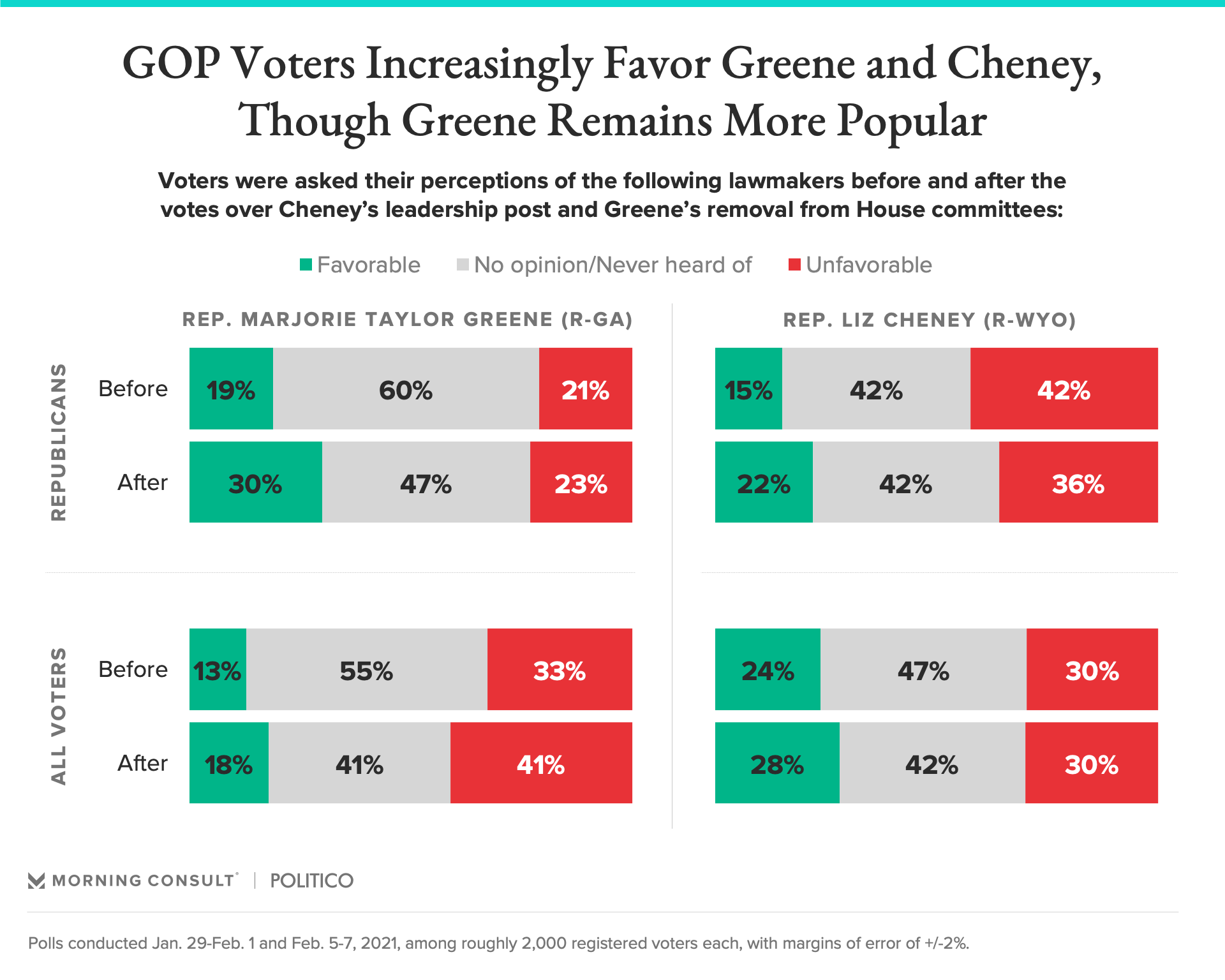 The share of Republican voters with opinions about Greene increased 13 points, with nearly all of the movement falling on the positive side. Three in 10 Republican voters hold favorable views of the freshman lawmaker, up 11 points in a week, while 23 percent view her unfavorably, virtually unchanged from the previous survey.

The improvement widened her intraparty popularity advantage over Cheney, the most prominent voice within the GOP caucus pushing for the party to move past Trump. Cheney saw a 7-point improvement in her favorability since last week, to 22 percent, while 36 percent view her unfavorably, down from the previous week but still 13 points higher than the share who said the same of Greene.

For both lawmakers, there is still a large swath of the national Republican base to fight over as they forge divergent paths for the future of the party: Pluralities of GOP voters said they had neither heard of or had no opinion about the two women.

Greene has basked in the spotlight thanks to the Democratic-led House vote to remove her from the Education and Labor and Budget committees that came after Republicans opted against stripping her of the assignments. Greene, who further aligned herself with Trump and his supporters in the days surrounding the vote, said on Feb. 6 that her campaign in a safe Republican district hauled in 22,000 new contributors across all 50 states.

Cheney, on the other hand, has been censured by Republicans in Wyoming and already faces a primary challenge due to her vote to impeach Trump for inciting the deadly Jan. 6 riot on Capitol Hill. Despite the home-state pressure, she has doubled down on calling for the Republican Party to disassociate itself with the kinds of conspiracies Greene has embraced in the past, and said Trump does not have a role as a future party leader.

Cheney is more popular with the overall electorate than either her freshman colleague or House Minority Leader Kevin McCarthy (R-Calif.). 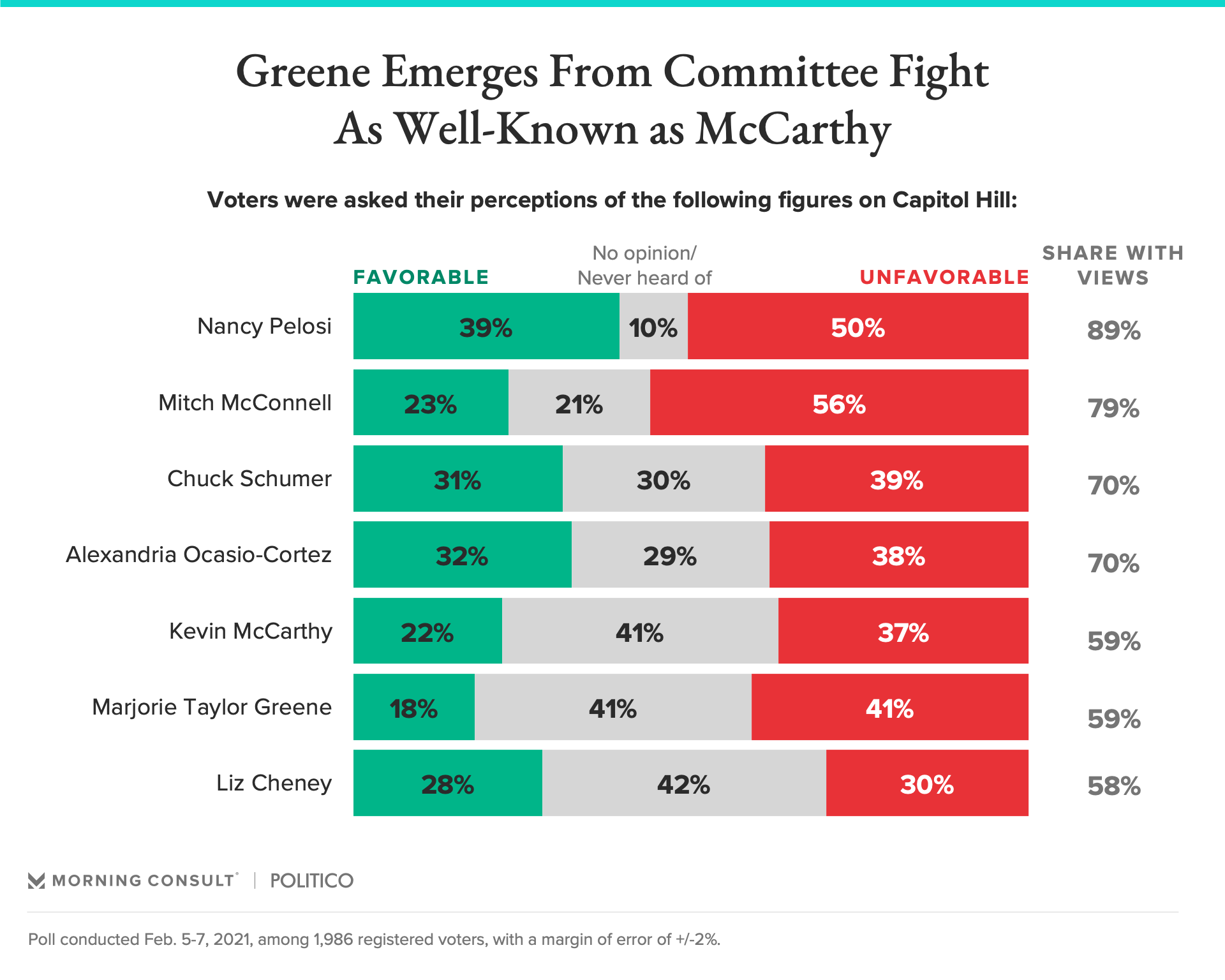 Voters are almost evenly split, at around 30 percent, when asked whether they hold favorable or unfavorable views of Cheney. But when it comes to Greene, they are more than twice as likely to harbor negative sentiment (41 percent) than positive sentiment (18 percent).

The Democrats’ move to elevate Greene in an effort to align the broader GOP with its extreme elements ahead of the 2022 midterm elections appears to be working: The past week has increased awareness of Greene by 13 points, making her equally as prominent as Cheney and McCarthy.

It is similar to the prominence Rep. Alexandria Ocasio-Cortez (D-N.Y.) has achieved alongside Senate Majority Leader Chuck Schumer (D-N.Y.) among voters nationwide, though the progressive lawmaker has nowhere near the national profile of House Speaker Nancy Pelosi (D-Calif.).