In COVID-19 Relief Package, Lawmakers Confident They Can Secure Millions in Funding to Vaccinate Senior Citizens

Congressional aides expect support for seniors, including $470 million largely for vaccinations, to make it into final aid package 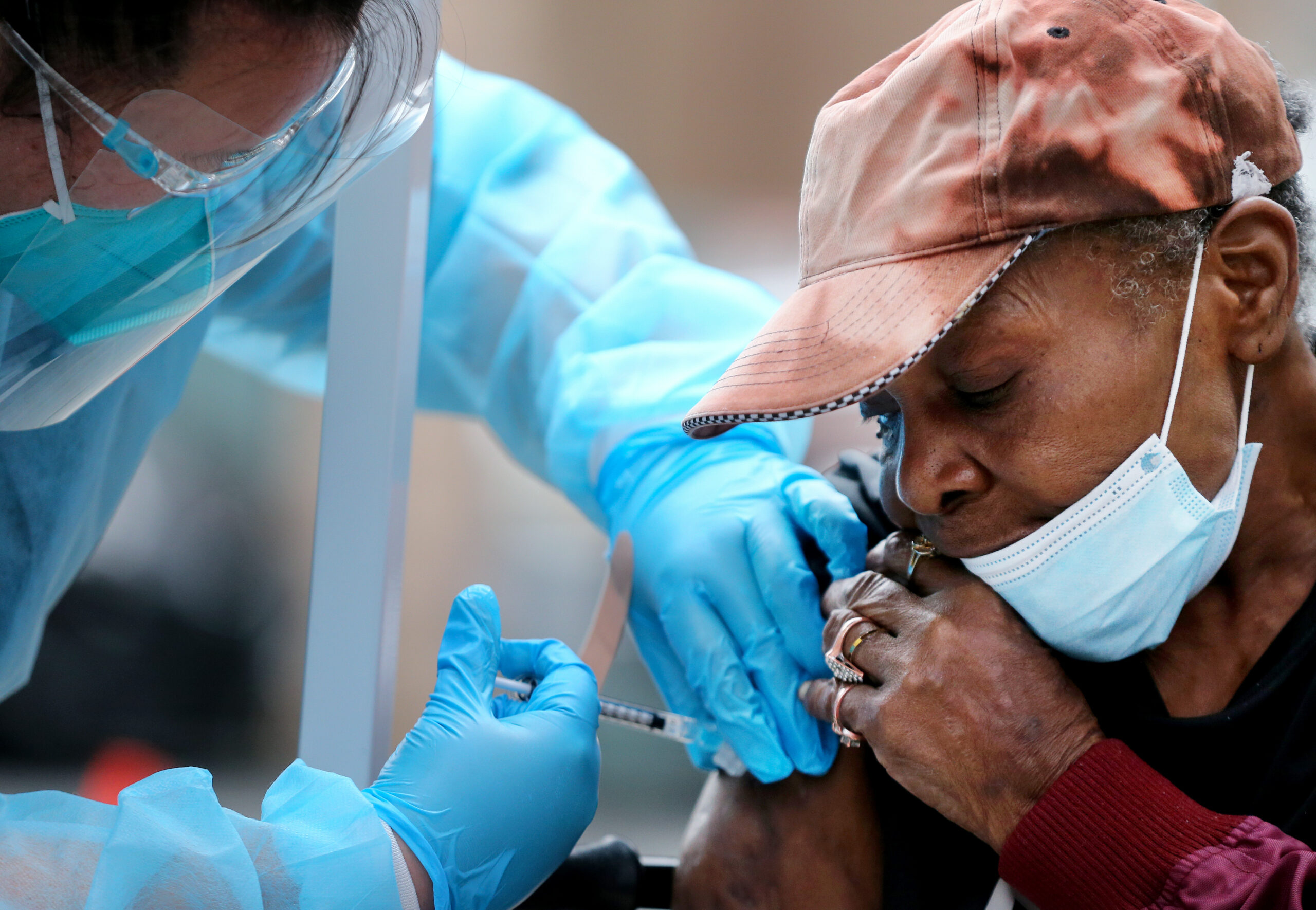 Viola, 75, receives a dose of the Moderna COVID-19 vaccine from a health care worker outside the Los Angeles Mission located in the Skid Row community on Feb. 10, 2021, in Los Angeles. (Photo by Mario Tama/Getty Images)
By Gaby Galvin

Groups that provide health and community-based services to older adults are poised to receive a windfall through the COVID-19 relief package moving through Congress.

Amid intense scrutiny of COVID-19 outbreaks in nursing homes and efforts to get residents vaccinated quickly, aging advocates say older adults still living in their communities have been overlooked in the pandemic response so far, despite being at higher risk of severe illness and death. Now, tucked into House Democrats’ COVID-19 relief bill is $1.44 billion for services for older adults, including $470 million expected to be used in part to help them get their COVID-19 shots.

The relief provisions, which passed the House Education and Labor Committee along party lines Wednesday, provide funding for programs through the Older Americans Act, which Congress reauthorized at the pandemic’s onset — though advocates say funding has largely dried up since then. The bill includes funding for nutrition services, support for caregivers and health promotion and disease prevention, on top of $470 million for home and community-based services.

That’s the pot local organizations can draw from to help older adults with transportation to vaccine appointments, hotlines to answer questions about the shots and other community-based outreach. While House lawmakers didn’t specify a dollar amount that must be used for vaccination efforts, the National Association of Area Agencies on Aging, which represents local aging services providers, previously proposed spending $200 million.

“Many seniors remain isolated, leading to dramatic increases in the demand for services and creating concern among providers who report they may soon run out of initial COVID relief funding,” Rep. Suzanne Bonamici (D-Ore.), who chairs the House subcommittee with jurisdiction over the Older Americans Act, said in an emailed statement.

The relief package could head to the House floor as soon as next week and then move to the Senate. While it’s unclear if some of its provisions, like increasing the federal minimum wage to $15 per hour, will survive, a House Education and Labor Committee staffer said they don’t expect the Senate to make major changes to the points dealing with older adults.

Democratic senators have signaled they will support the measures, with a group of 11 lawmakers led by Sen. Kirsten Gillibrand of New York calling Thursday for funding for older adults to be included in the Senate version of the legislation. An aide to Sen. Patty Murray (D-Wash.), who chairs the Senate Health, Education, Labor and Pensions Committee, also said the bill was a top priority.

“Future COVID-19 relief legislation must include meaningful investment in home and community-based services and funding for vaccination outreach efforts targeted at hard to reach populations,” Sen. Bob Casey (D-Pa.), who chairs the Senate Special Committee on Aging and signed on to Gillibrand’s letter, said in an emailed statement.

Democratic leadership plans to pass the package via budget resolution, a legislative process that requires only a slim majority to be approved, with Vice President Kamala Harris casting the tie-breaking vote in the Senate.

The funding represents a major win for aging advocates, who have been pushing for additional support for older adults since the early days of the pandemic. They argue that supportive services provided in the home or community settings help keep older adults out of nursing homes and other long-term care facilities, which have accounted for 36 percent of the country’s COVID-19 deaths.

But after the Older Americans Act was reauthorized last spring, more recent proposals were “watered down or stuck in the Senate,” said Howard Bedlin, vice president of public policy and advocacy at the National Council on Aging.

Amy Gotwals, chief of public policy and external affairs at the National Association of Area Agencies on Aging, noted that now is “a terrible time to be an older adult, particularly one who really needs some support to live a healthy life.”

The early vaccine rollout has shined a light on the challenges facing older adults. While more than 3.9 million people have been vaccinated in long-term care settings — a figure that also includes staff members — other older adults have struggled to navigate confusing websites in order to sign up for appointments. Even in states where adults 65 and older are eligible for vaccination, for example, most have not yet received at least one dose, according to a recent analysis from the Kaiser Family Foundation. West Virginia has vaccinated the greatest share of its older residents, at 34 percent.

“There are opportunities where the aging network can help with vaccinations,” Bedlin said, but those groups are “kind of being overloaded right now.”