The Greater Appeal of Energy-Efficient Appliances Is a Reduction in Energy Costs, Not in Emissions

From supporting higher fuel economy levels to backing stricter building efficiency standards, the Biden administration’s clean-energy push appears broadly popular among the public — with the caveat that transition costs are regularly cited as a concern.

Consumer attitudes toward purchasing electric appliances are no different, as over half of U.S. adults say they wouldn’t consider buying an energy-efficient model if it cost more than a conventional air-conditioning unit, space heater, refrigerator or other major electric good.

But for lawmakers and industry leaders alike, there is a silver lining to that seemingly discouraging data: A healthy majority of American consumers give at least some thought to energy efficiency when it comes to buying major appliances, and those who do are primarily motivated by the long-term cost savings they expect to see.

In a Morning Consult poll conducted Jan. 27-28, 76 percent of the 1,853 survey respondents who said they have taken energy efficiency into account when purchasing electric appliances cited saving money on their electricity bills as a major reason for doing so, while another 21 percent said it was a minor reason.

At 81 percent, Republicans were 9 points more likely than Democrats to identify savings as a major reason behind efficiency considerations, while independents nearly split the difference at 78 percent. 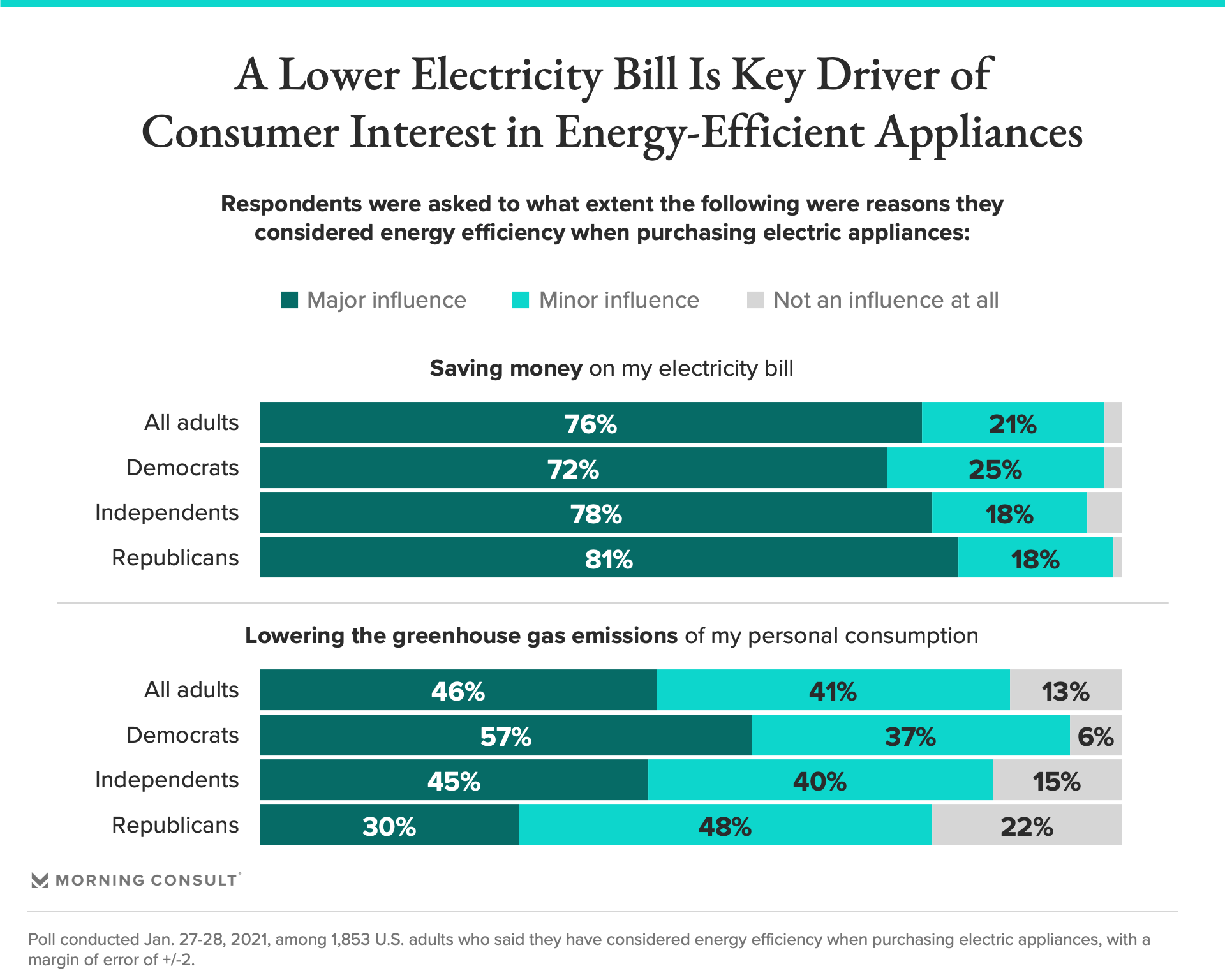 The survey, which sampled 2,200 U.S. adults overall and has a margin of error of 2 percentage points, comes after a November 2020 report from the Appliance Standards Awareness Project and the American Council for an Energy-Efficient Economy found that $1.1 trillion in savings on utility bills could be generated through 2050, assuming the Biden administration follows through on having the Department of Energy update efficiency standards for 47 kinds of appliances and products.

The tangible result of purchasing an energy-efficient appliance — in this case, lower electricity bills — is a stronger motivator for consumers than lowering greenhouse gases, the survey found. Reducing emissions via personal consumption was singled out by 46 percent of adults as a major reason for considering energy efficiency in buying electric appliances — 30 points lower than the share that pointed to cost savings in their bills.

Whether the Biden administration pursues its energy-efficient appliance initiatives through executive action remains to be seen, but the survey results suggest that the public would be mostly receptive to the idea of electric goods made with efficiency in mind, especially if President Joe Biden is able to provide direct cash rebates and low-cost financing to families to upgrade and electrify their home appliances under his clean energy plan.

Though higher costs in energy-efficient appliances are not viewed as a daunting obstacle on the level of electric vehicles, they are still a barrier to more widespread purchasing behaviors.

Overall, 44 percent of adults said they would spend more for an energy-efficient electric appliance than a conventional one, including 54 percent of Democrats, 39 percent of independents and 36 percent of Republicans.

Related: Most of the Public Says They Consider Their Individual Environmental Impact on a Daily Basis
Carbon Electricity Energy Efficiency Utilities