Teachers Should Be Vaccinated Before Schools Reopen, Most Voters Say 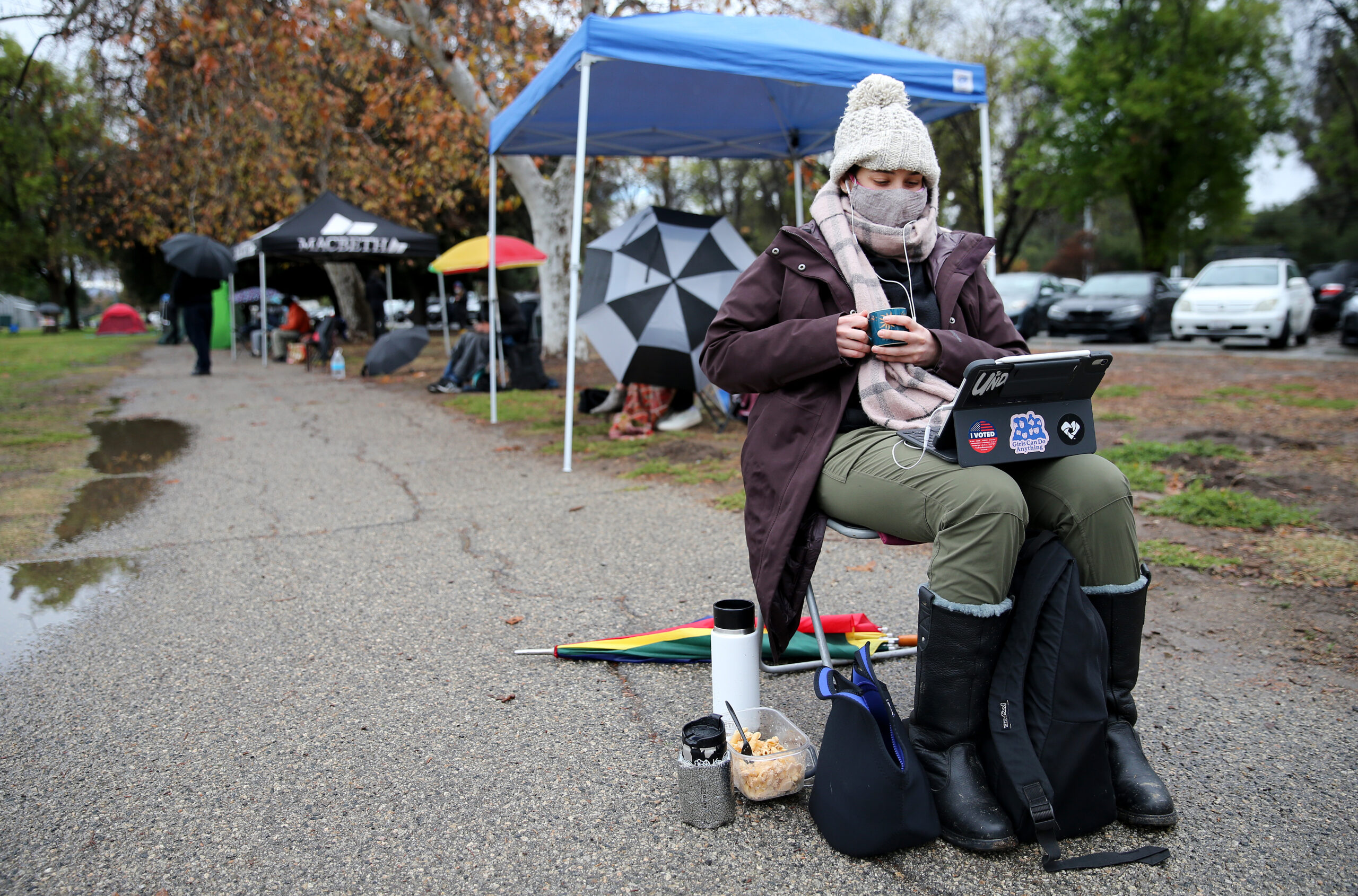 Teacher Lily Gottlieb waits on Jan. 29 in a socially distanced standby line in Encino, Calif., for people hoping to receive leftover COVID-19 vaccine doses that would otherwise expire and be tossed out each day. New polling shows 55 percent of voters believe schools should remain closed until all teachers have been vaccinated, which runs contrary to the guidance recently released by the Centers for Disease Control and Prevention. (Mario Tama/Getty Images)
By Eli Yokley

The Biden administration is pressing ahead with a scaled-back plan to reopen some American schools amid the coronavirus pandemic without waiting for every teacher to be vaccinated, but the bulk of voters are backing an even more conservative approach — even as Republicans try to wield President Joe Biden’s initial reticence as an early political cudgel.

According to a new Morning Consult/Politico poll, 55 percent of voters said states should wait to reopen schools until teachers have received the vaccine, while 34 percent said schools should be reopened as soon as possible, even if not every teacher has been vaccinated. 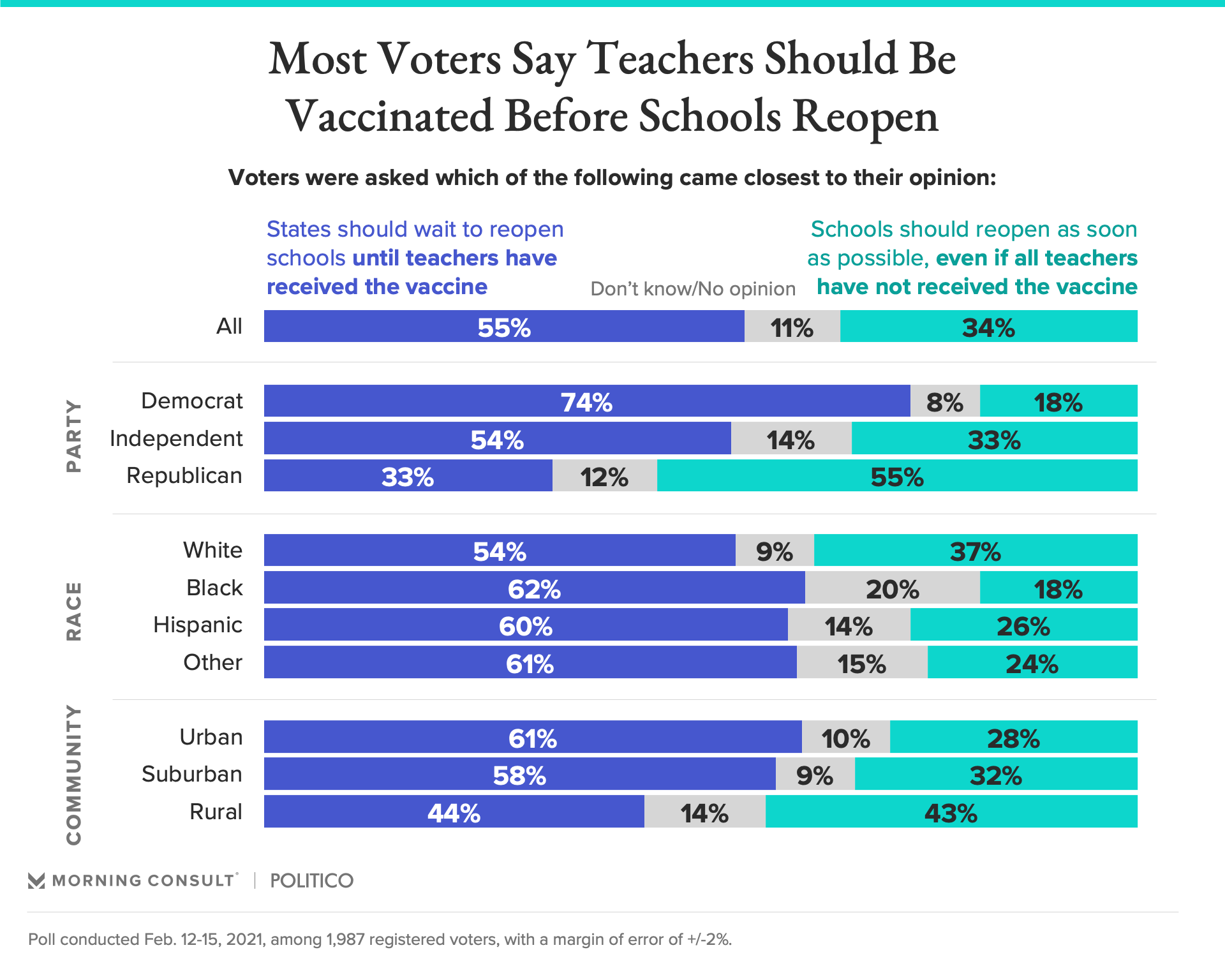 Support for the speedier approach is driven largely by Republicans, 55 percent of whom said schools should be reopened even if all teachers aren’t inoculated, while roughly 3 in 4 Democrats said schools should wait until educators receive the shots.

The Feb. 12-15 survey was conducted after the Centers for Disease Control and Prevention issued new guidance for school reopening that calls vaccines “one layer of mitigation and protection for staff and students,” but before Biden said Tuesday that he’d like to see more teachers and school staff vaccinated as he presses for kindergarten through eighth-grade classrooms to be reopened by his 100th day in office.

Federal officials such as Dr. Anthony Fauci, director of the National Institute of Allergy and Infectious Diseases, have said that the universal vaccination of educators is not necessary for reopening America’s schools – putting them at odds with some teachers unions.

According to a tally from CNN, at least some teachers and school staff members are eligible to receive a COVID-19 vaccine in 28 states and the District of Columbia. But many schools still aren’t open for in-person learning, and the issue of reopening – where concerns about teacher safety are clashing very publicly with concerns about the effectiveness of online learning and the economic strain on parents – has emerged as a major pain point for Biden.

Advocates for teachers, including the powerful unions that represent them, have questioned whether the vaccine reduces COVID-19 transmission, raised concerns about educators with pre-existing medical conditions and pressed for Washington to provide funding for personal protective equipment. Republicans have attempted to use the issue as a wedge, pitting the teachers unions – which wield powerful influence within the Democratic Party – against working parents.

“I have kids in public school who are in virtual classes right now, they are suffering. Moms are suffering,” said Republican National Committee Chairwoman Ronna McDaniel in an interview with Fox News last week. “We’re going through what Time called a ‘she-cession’ – so many women are losing their jobs because of daycare issues and the Biden administration says, ‘You know what? We’re not going to open the schools because we’re more beholden to teachers unions.’”

Nearly a month into his presidency, Biden continues to get good marks on his handling of the pandemic, with 60 percent approval on the subject, virtually unchanged since a survey conducted Jan. 29-Feb. 1. But he’s earned some disfavor on the issue of education: 48 percent approve of his job performance and 32 percent disapprove, up 4 percentage points over two weeks, driven by an increase of 9 points among Republicans. 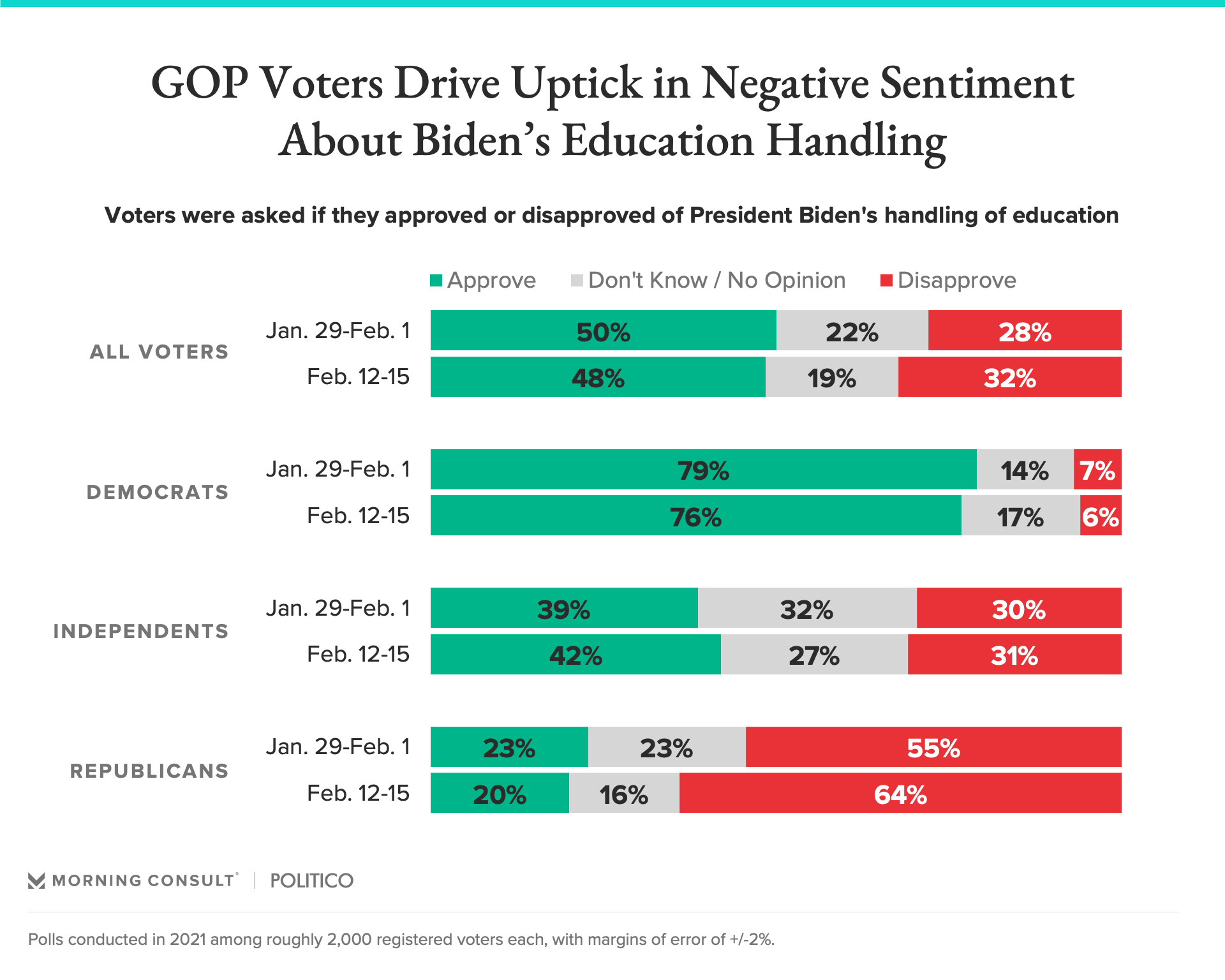 Biden campaigned on reopening schools for in-person learning, and pledged during the transition to reopen most within the first 100 days of his presidency. He recently took heat after focusing his reopening pledge to include only kindergarten through eighth-grade classrooms amid concerns about transmission among high schoolers. Asked last week to explain what delivery on that pledge would look like,White House press secretary Jen Psaki said “more than 50 percent” of American schools would be back in-person “at least one day a week,” which some criticized as backpedaling.

During Tuesday’s town hall-style event with CNN, the president distanced himself from Psaki’s statement, calling it a “mistake in the communication.”  He said the goal should be for schools to be open five days a week and suggested that classes might be held over the summer to make up for time lost due to the pandemic.

Looking ahead to the fall, the majority of voters say they think it’s a good idea to open K-12 schools and colleges for in-person instruction, driven largely by Republican voters, with Democrats more likely than their partisan peers to say they are unsure or have no opinion. When it comes to whom they trust to make the call, voters overall are most likely to say they’d trust parents and local officials – not Washington. 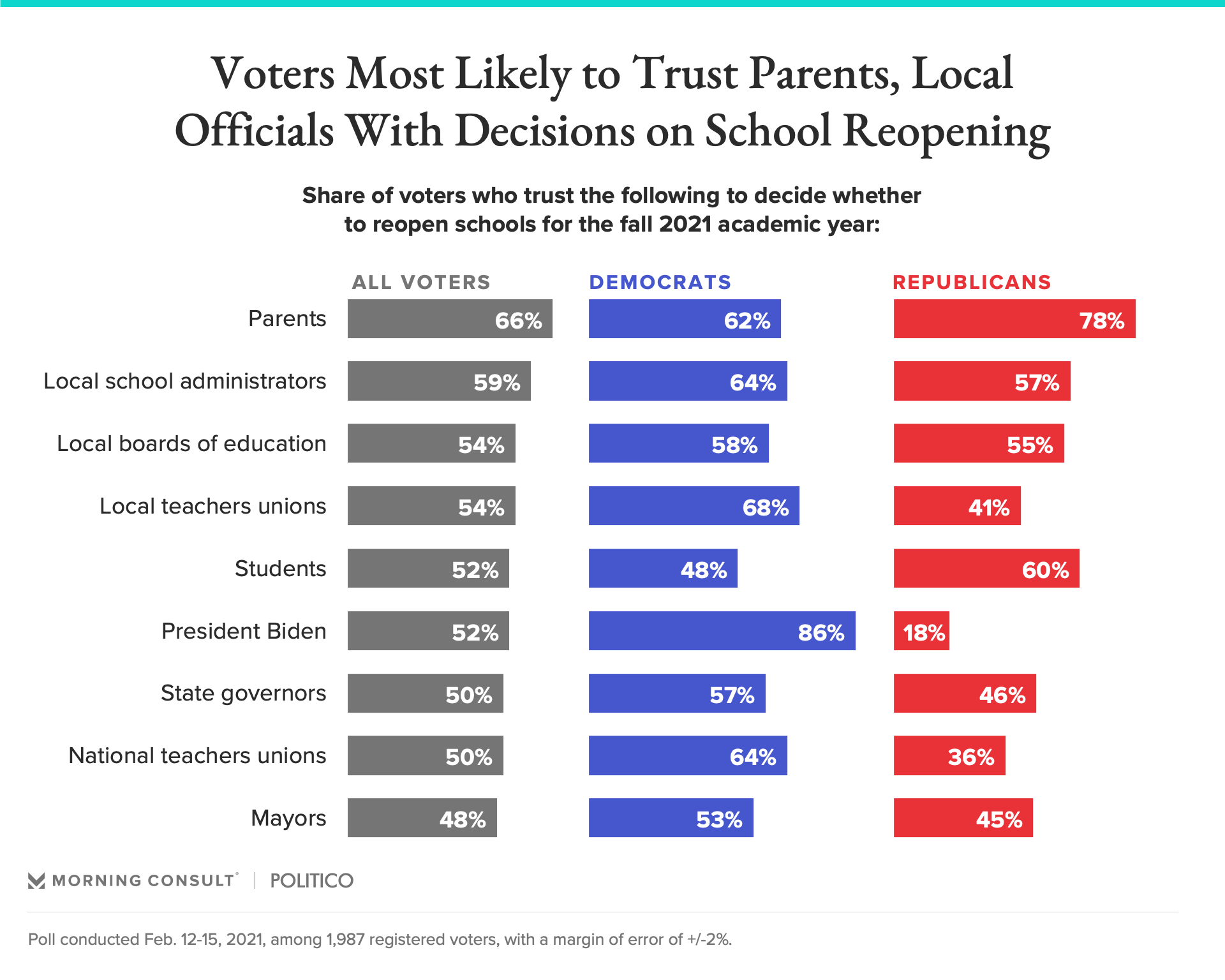 According to the latest survey, most voters said they’d trust parents (66 percent), local school administrators (59 percent) or local boards of education (54 percent) with the issue of whether to conduct in-person fall classes – each producing some of the smallest gaps between Democrats and Republicans. Just over half of voters (52 percent) said they trust Biden to make the call – the same share who said they trust the students themselves.