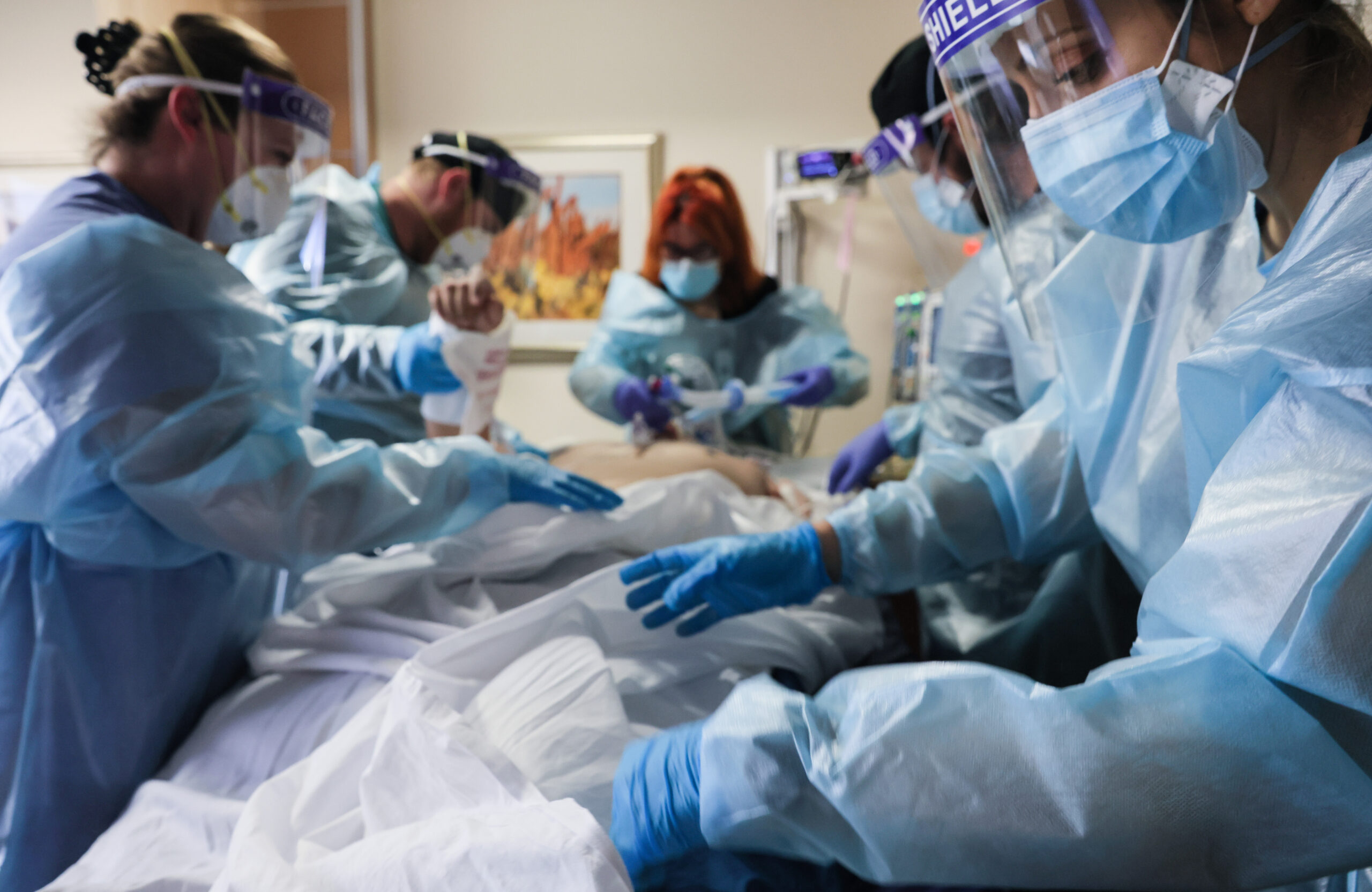 Clinicians attend to a COVID-19 patient at Providence St. Mary Medical Center in Apple Valley, Calif., on Jan. 6, 2021. Hospitals and other providers, which have been earmarked for $178 billion in federal funding during the pandemic, were central to the earliest relief bills last spring as non-emergency care ground to a halt and hospitals became both the first and last lines of defense against the coronavirus. (Mario Tama/Getty Images)
By Gaby Galvin

Congress is expected to send a $1.9 trillion COVID-19 relief bill to President Joe Biden’s desk in the coming weeks, but with funding for one group notably excluded: health care providers.

Hospitals and other providers, which have been earmarked for $178 billion in federal funding during the pandemic, were central to the earliest relief bills last spring as non-emergency care ground to a halt and hospitals became both the first and last lines of defense against the coronavirus. This time around, the country’s major hospital lobbying groups asked for more than $30 billion for the Provider Relief Fund, with billions set aside for rural hospitals.

But providers faced a frosty reception from Democratic lawmakers, who pointed to the approximately $24 billion that hasn’t yet been allocated from the fund as evidence hospitals and other providers don’t need additional funding now, as well as other health care provisions in the bill that aim to close insurance coverage gaps and would, in theory, increase provider revenue. 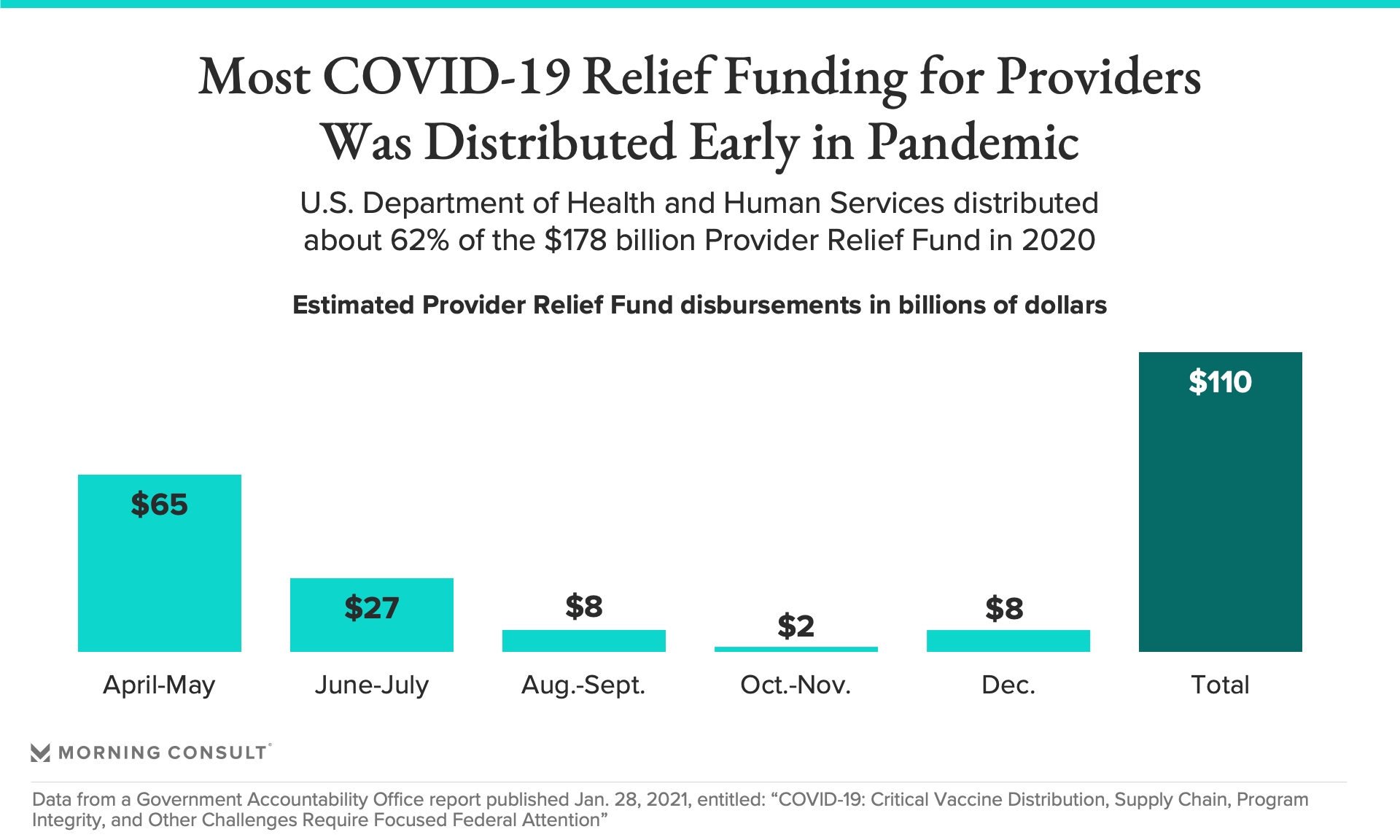 During a markup hearing on the bill earlier this month, for example, House Energy and Commerce Committee Chairman Frank Pallone (D-N.J.) said he thought hospitals had already gotten enough money and that funding should instead go to public health efforts to fight the virus; a spokesperson said via email that congressional Democrats would work to ensure the remaining funds are “distributed equitably across the country and reach the providers most in need of supplemental funding.”

Pallone’s verdict came after Rep. Brett Guthrie of Kentucky, the top Republican on the Energy and Commerce health subcommittee, introduced an amendment that would have added $35 billion to the Provider Relief Fund but was voted down. The full House bill, which passed out of the Budget Committee on Monday, is expected to reach the floor for a vote as soon as Friday.

“This is a COVID relief bill,” Guthrie said in an interview, but “our providers aren’t getting anything.”

Now, in a last-ditch effort to secure additional relief, health care lobbyists are turning to the Senate, where there has been bipartisan interest in providing additional support for the Provider Relief Fund but where a tight deadline to send legislation to Biden’s desk could keep lawmakers from significantly changing the bill.

Trade groups representing hospitals and long-term care facilities are hoping the process moves slowly enough to allow them to make their case. They say their members remain financially stressed one year into the pandemic, with the American Hospital Association estimating these providers faced $320 billion in lost revenue in 2020.

Related: About a Third of Health Care Workers Say Their Facilities Lack Space for a Surge in COVID-19 Patients

“We’re not out of the woods yet,” said Carlos Jackson, vice president of legislative affairs at America’s Essential Hospitals, which represents safety-net providers. “None of us know when the pandemic will be over.”

But lobbyists are facing some challenges making the case for speedy relief. In addition to the billions in provider relief that have yet to be distributed, U.S. hospitalizations overall have largely rebounded since their spring dropoff, reaching about 94 percent of their predicted level in early December, while outpatient visits generally remained stable at the end of 2020, if lower than in previous years, despite the uptick in COVID-19 cases. And some well-known providers, including the nonprofit giant Mayo Clinic and HCA Healthcare, the major for-profit health system, have returned millions and billions of dollars, respectively, to the Provider Relief Fund.

Even so, health care executives say many among their rank are still struggling. “‘Drive the resources to where they are needed’ is our message,” Jackson said.

Health care groups may find more sympathy in the Senate. Sens. Susan Collins (R-Maine) and Joe Manchin (D-W.Va.) pushed to include $35 billion for health care providers in this round of relief, and in a largely symbolic vote, 99 senators voted in favor of strengthening the fund during the Feb. 4 vote-a-rama to kick off the budget reconciliation process, a special legislative procedure that allows a bill to pass with a simple majority in the Senate.

Health care groups acknowledged that their window to secure additional funding in the current relief bill is narrowing.

“This is the pathway,” said Chip Kahn, president and chief executive of the Federation of American Hospitals, which represents for-profit facilities. “If it doesn’t work out, we’ll have to figure out what we do for Plan B.”

Mary Grealy, president of the Healthcare Leadership Council, which represents health care executives, said that while her group will “continue to push hard” for additional provider relief in the current bill, it’s “unclear” whether there will be much room for change in the Senate.

Aides to Pallone and Sen. Patty Murray, the Washington Democrat who chairs the Senate Health, Education, Labor and Pensions Committee, told Morning Consult that the lawmakers would be open to expanding the Provider Relief Fund at a later date.

Yet additional funding for providers down the line isn’t a given, either, especially if it continues to be ensnared in larger political battles. Guthrie, for one, said it is “frustrating” that the current relief bill seems to prioritize Democratic legislative goals over provisions directly related to the pandemic, like support for health care providers, and that he can’t say yet whether he’d be supportive of additional relief in a future bill.