Following Mass Power Failures in Texas, Over Half of Voters Say State Needs to Connect Its Grid to Others

Voters were most likely to blame Texas officials, state regulators for the blackouts 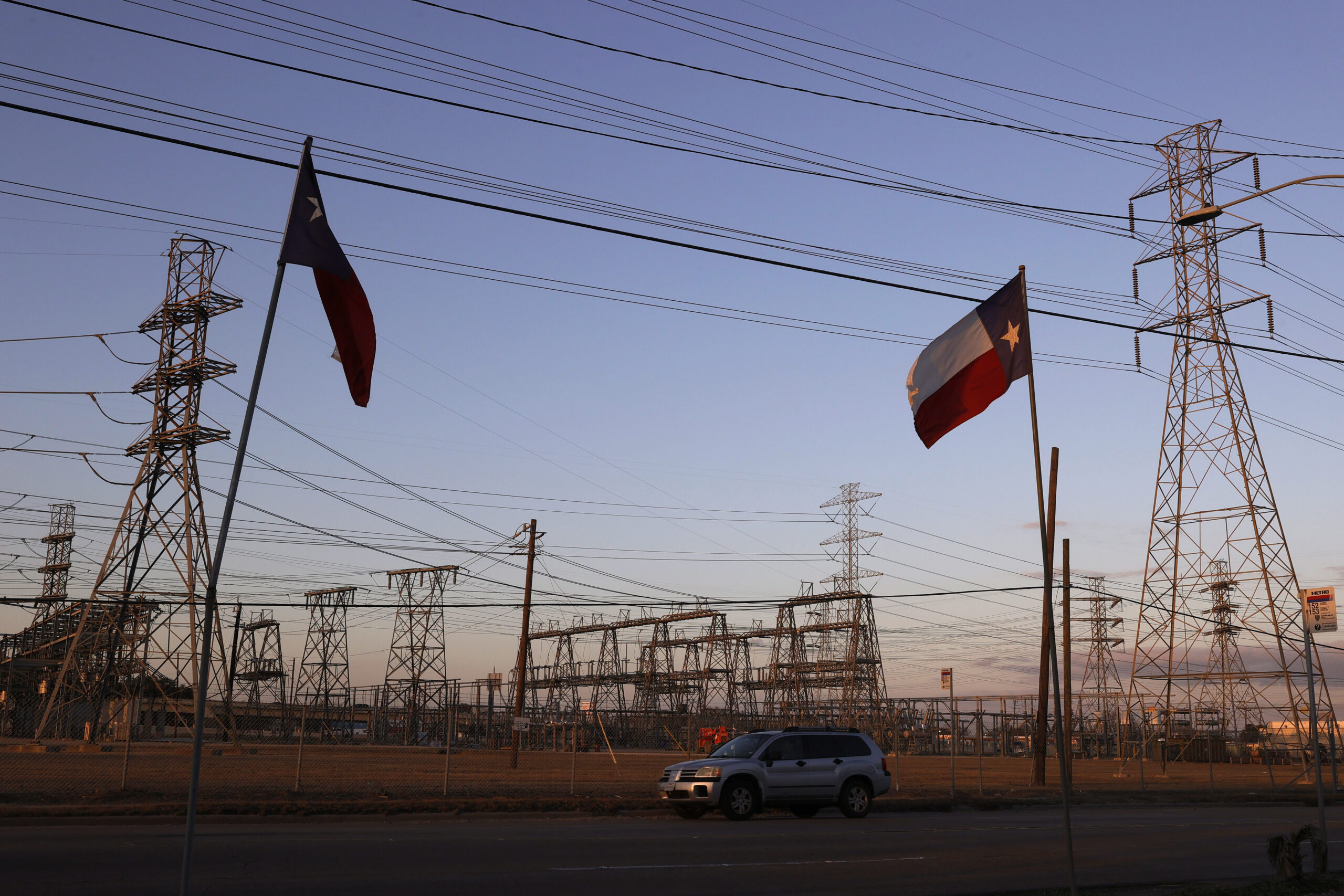 Mere weeks ago, it was safe to assume that most U.S. voters had never thought much about their regional grid, much less about the Electric Reliability Council of Texas, which regulates the state’s uniquely independent electricity system. But after a rare storm and below-freezing temperatures sent millions of Texans into extended blackouts with neither safe drinking water nor gas last week, suddenly the way that power is overseen has drawn new scrutiny.

In the lower 48 states, Texas is alone in having an independent, nonprofit corporation (ERCOT) managing its statewide electricity grid, rather than the Federal Energy Regulatory Commission. The rest of the country is dominated by regional grids that trade power across state lines, a process regulated in part by FERC.

According to a new Morning Consult/Politico survey that was conducted as the state began to pick up the pieces of the disaster, over half of the country’s voters believe Texas should no longer retain this independence.

Asked to choose which option aligned better with their opinion, 56 percent of registered voters said Texas should connect its electric grid with those of other regions, “allowing federal regulators oversight to prevent disasters like this from happening again.” Such a move could potentially include linking Texas’ grid to the Western Interconnection, the Southwest Power Pool or the Midcontinent Independent System Operator South, which surround the state.

Meanwhile, 24 percent said Texas should continue to operate its independent electric grid, so it “can continue to make decisions that are best for the state and avoid federal regulations.”

Though FERC has no authority to change the state’s model, on Feb. 18, FERC Chair Richard Glick (D) called on both Congress and the Texas Legislature to “rethink” the state’s commitment to its lone grid, saying that its limited ability to get power from neighboring regions amounts to “the proverbial cutting off your nose to spite your face.” In a regulatory filing Tuesday, the chair and four other members of ERCOT said they would resign, effective Wednesday. 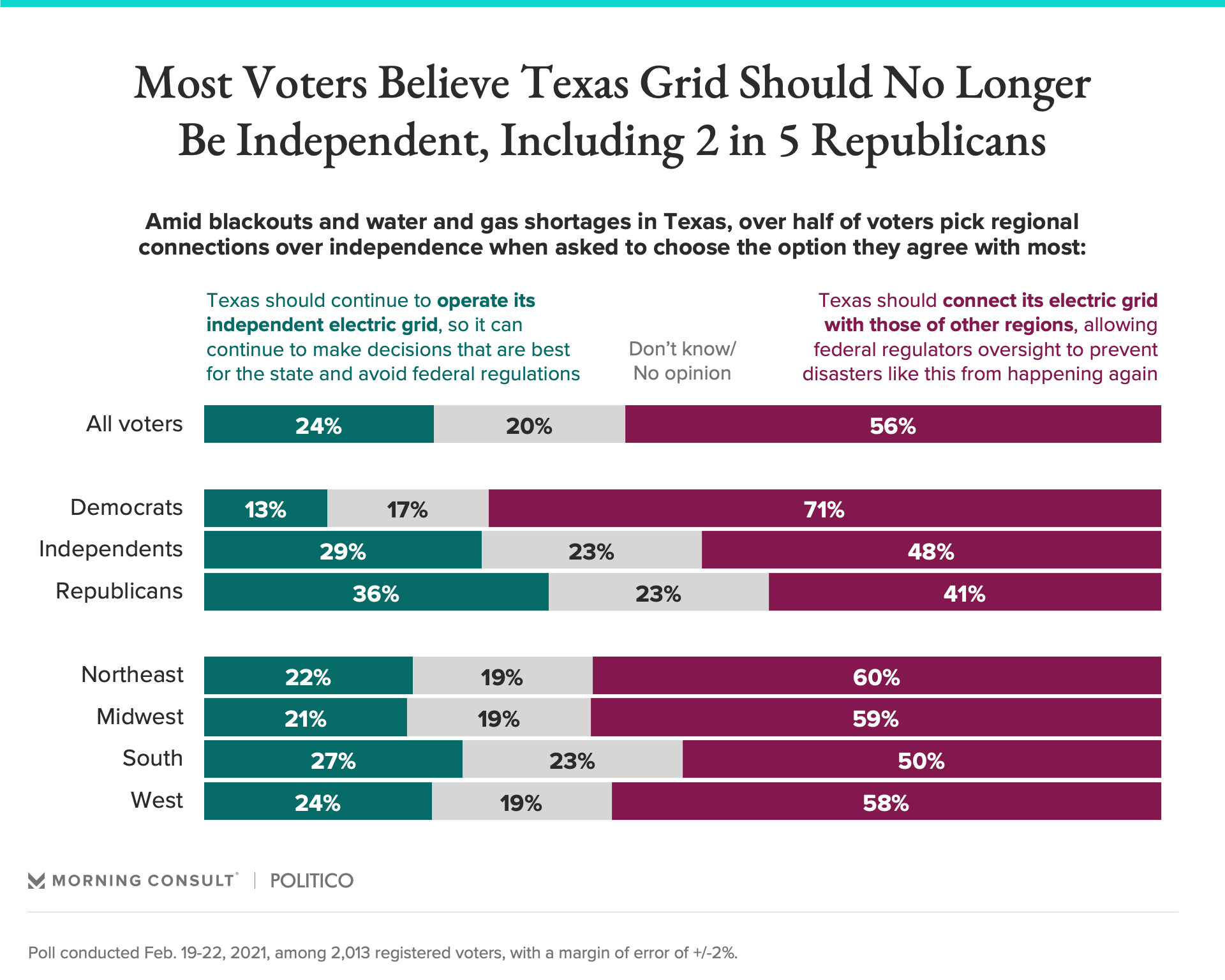 Democrats were more likely to say they believe Texas should connect to other regions than retain its current model (71 percent to 13 percent), and a plurality of Republicans agreed with them (41 percent to 36 percent). Texas has been historically dominated by GOP political persuasions and a “go it alone” approach to regulatory decisions, though the state has become more purple in recent years. 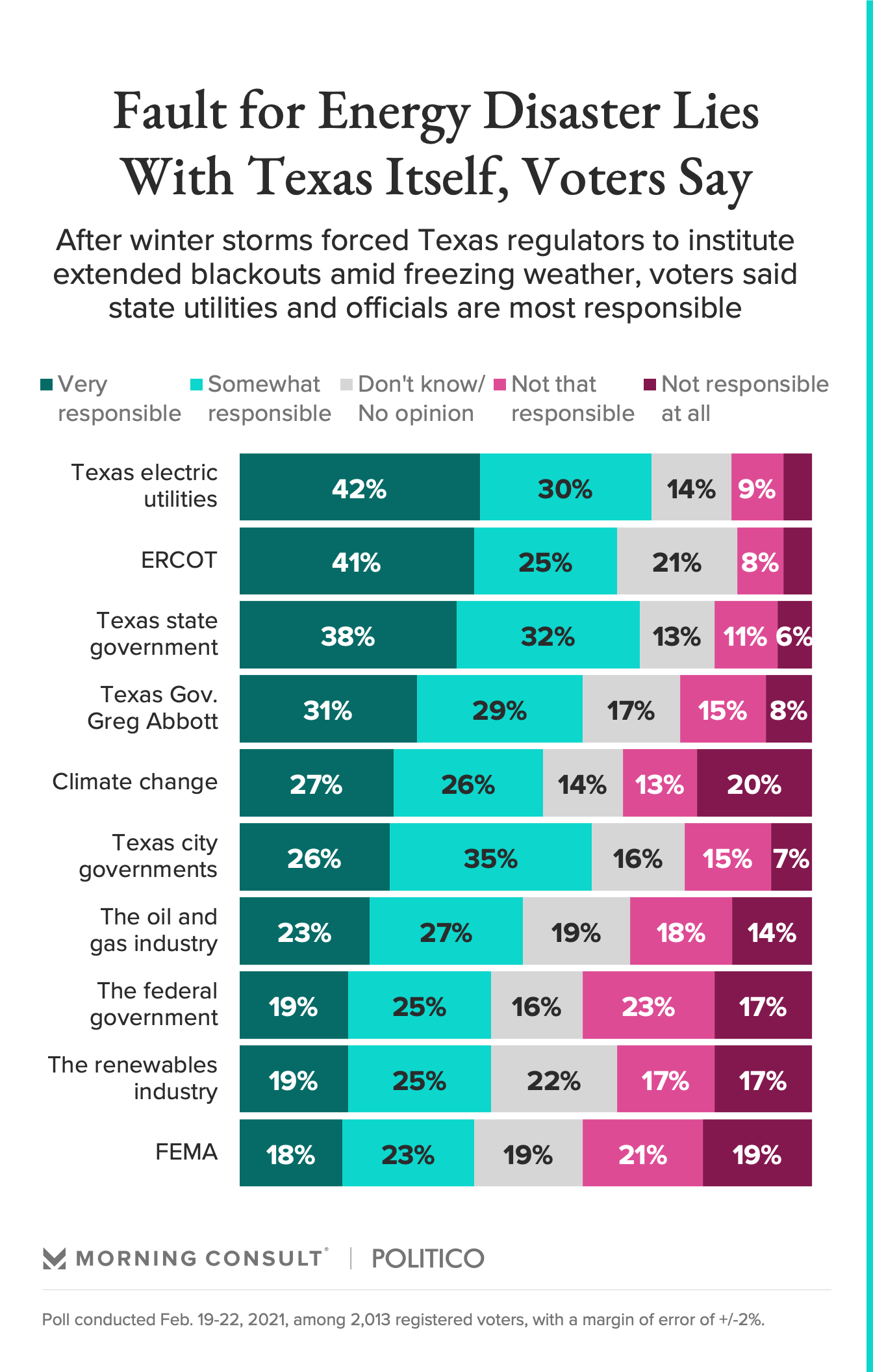 While voters from the South were slightly less likely than those from other regions to say Texas should join up with other regional grids, a solid half backed the option and 27 percent said it should continue to operate on its own.

When it comes to the matter of blame for last week’s energy crisis, respondents seem to believe it lies most with Texas itself, with the state’s electric utilities, ERCOT and state government seen as “very responsible” by roughly 2 in 5 respondents.

And despite the momentary virality of photos of frozen wind turbines, the renewables industry garnered among the lowest shares of blame for the blackouts, with 44 percent of respondents saying it is very or somewhat responsible. Half of voters, meanwhile, pointed the finger at the oil and gas industry. (Nearly all types of energy production and transmission in Texas froze or otherwise malfunctioned last week, even a nuclear plant, often deemed the most reliable option for electricity provision.)

Fifty-three percent of respondents said climate change was responsible for the situation in Texas; the phenomenon also elicited the highest share of voters saying it held no responsibility at all, at 20 percent.

The Feb. 19-22 poll surveyed 2,013 registered voters and has an overall margin of error of 2  percentage points.