78% of adults said they had heard 'nothing at all' about the Golden Globes’ most nominated movie, 'Mank' 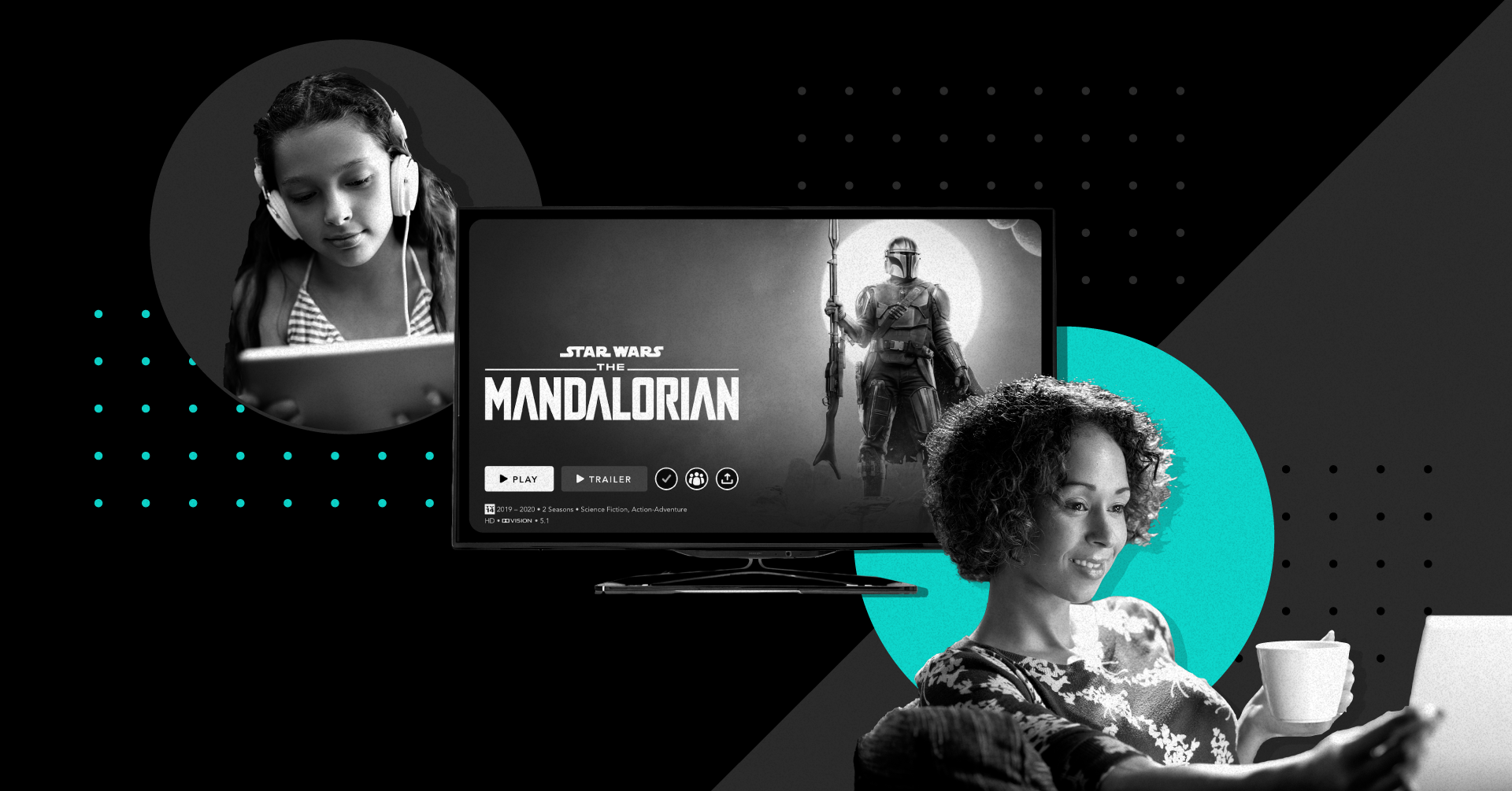 On average, 22 percent of respondents had seen a Disney+ Golden Globe nominee, like "The Mandalorian," while 15 percent had seen a Netflix nominee, according to a new Morning Consult poll. (Getty Images / Disney+ Apple TV app / Morning Consult artwork by Vladimir Gorshkov)
By Sarah Shevenock

2020 should have been a perfect storm for awards season, at least in terms of viewer interest.

Seemingly a nod to our new streaming reality, the Hollywood Foreign Press Association nominated a record number of programs available on streaming for Sunday’s Golden Globes. And yet, similar to previous years, most of the public is unaware of this season’s top nominees. 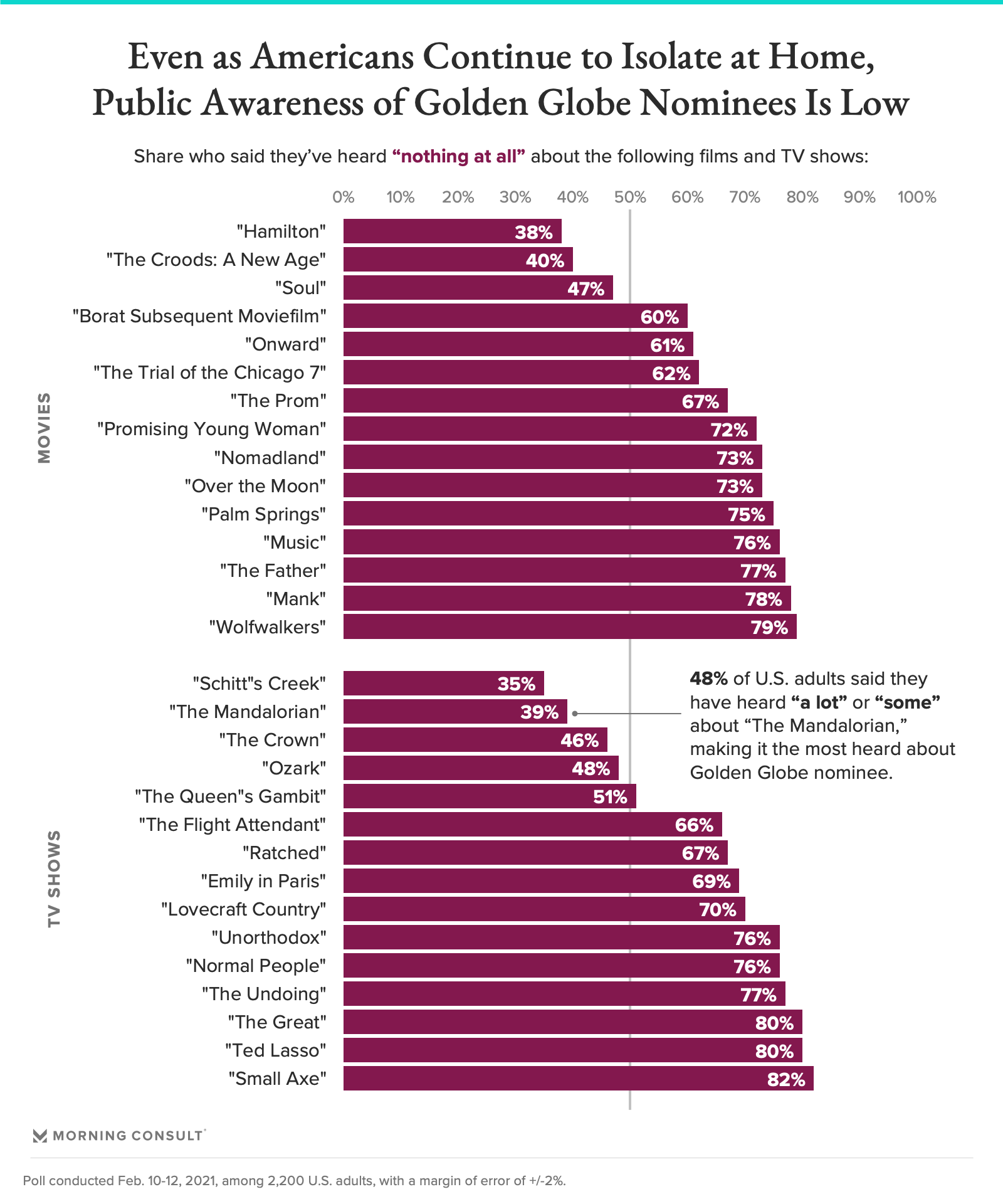 Of the 30 programs up for best film, TV show or miniseries this year, a majority of the public has not heard anything “at all” about 23 of the titles. Walt Disney Co.’s “The Mandalorian” was the most heard about program, with 48 percent of respondents in a new Feb. 10-12 Morning Consult survey saying they heard “a lot” or “some” about the “Star Wars”-affiliated show.

Results of the survey, which carry a margin of error of 2 percentage points, show that, even as viewers consumed more programming amid the COVID-19 pandemic, their choices didn’t necessarily expand into the critically acclaimed films that typically define the awards season.

Fifty-five percent of 2,200 U.S. adults surveyed said they have been watching more movies since the start of the pandemic, while 57 percent said they have been watching more TV shows. Americans spent an average of 142.5 billion minutes streaming video content in the second quarter of 2020, according to Nielsen Holdings PLC’s Total Audience report, up from 81.7 billion minutes during the same period in 2019.

What’s more, FX’s annual Peak TV report found that the number of scripted original programs airing on broadcast, cable and streaming platforms last year dipped 7 percent to 493. And according to The Numbers, 57 films were widely released in 2020, down from 131 in 2019. 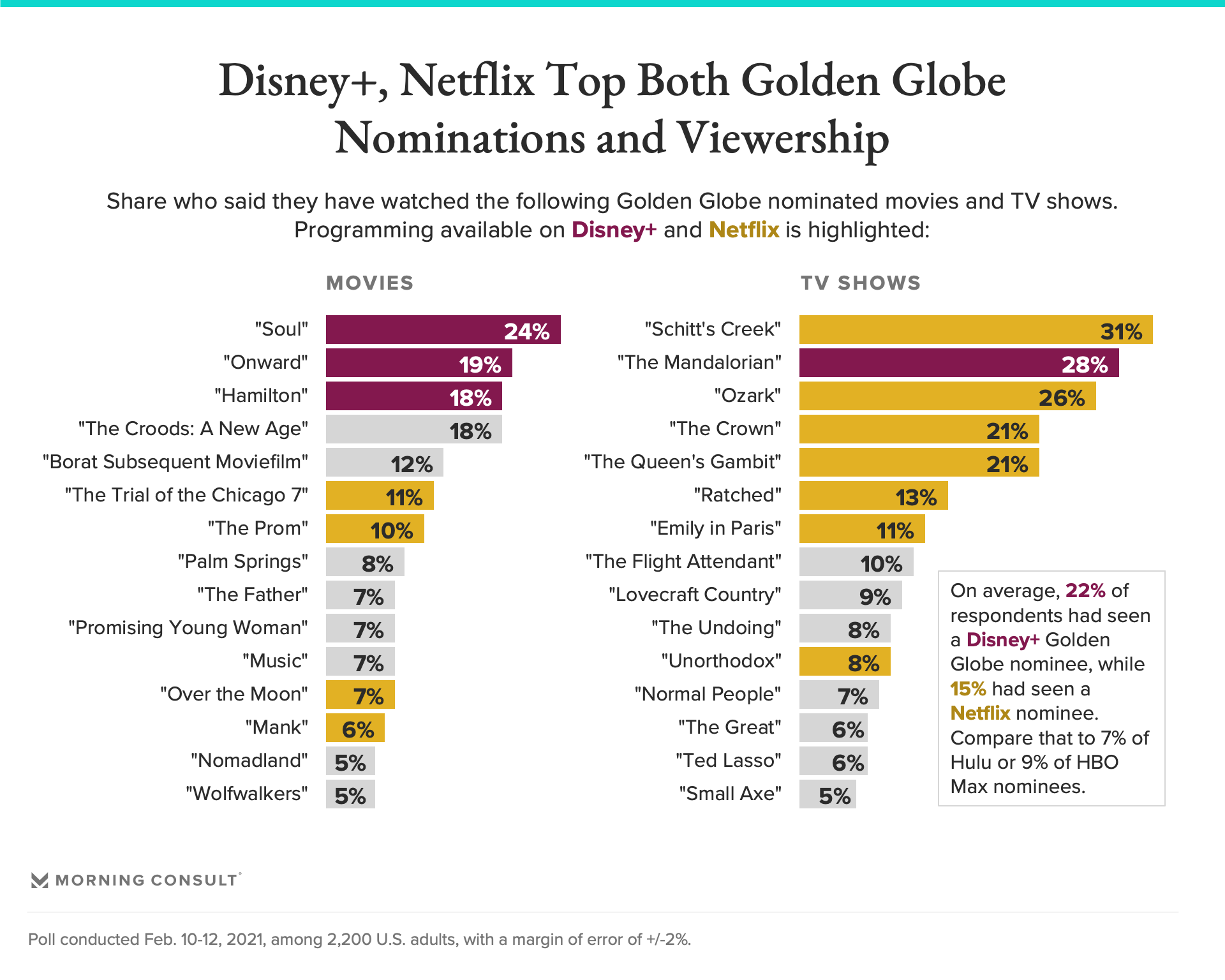 Titles from Walt Disney Co. and Netflix Inc. — which led Golden Globe nominations with 42, including six nods for the David Fincher film “Mank” and six for “The Crown” — were the most-watched, with an average of 22 percent and 15 percent of respondents, respectively, saying they have seen a Disney+ or Netflix Golden Globe nominee.

“Schitt’s Creek,” a CBC Television Co. program first made available to U.S. audiences via Pop TV before getting a bump from Netflix when it started airing the series in 2017, was the most popular among TV nominees, with 31 percent of adults surveyed saying they had watched the comedy. Disney+’s “The Mandalorian” came in second at 28 percent.

On the film side, Disney dominated, as “Soul,” “Onward” and “Hamilton” took the top three spots, while the family film “The Croods: A New Age” earned an equal share to “Hamilton.” Universal’s “Croods” sequel premiered in theaters in November but became available for at-home viewing via PVOD in December.

Related: Even Amid Price Hike, Netflix Led Streaming Use in Second Half of 2020

Critical darlings “Nomadland” and “Promising Young Woman,” which are available on Hulu and PVOD, respectively, received less enthusiasm in the survey.

Part of Disney+ and Netflix’s fandom in the poll could be due to their abundant subscriber bases, with more than 203 million paid subscribers globally at the end of last year for the former and a reported nearly 95 million subscribers as of Jan. 2 for the latter. 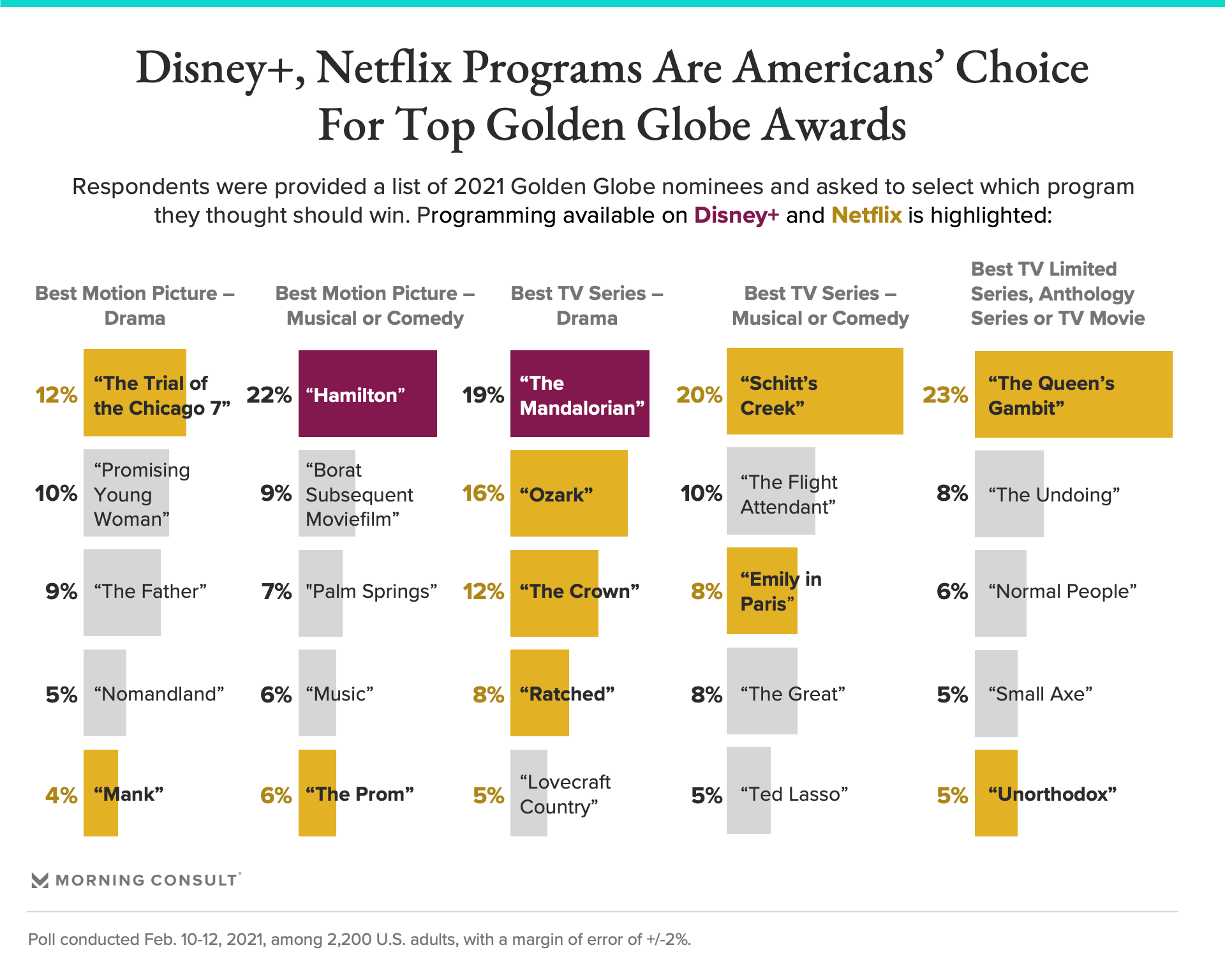 The two platforms also earned the most votes to win their respective categories on Sunday, when the 78th Golden Globes will air live on NBC.

On the TV side, the public favors Netflix’s “The Queen’s Gambit,” “Schitt’s Creek” and “The Mandalorian” to win their categories, while cheering on Netflix’s “The Trial of the Chicago 7” and Disney+’s “Hamilton” for the film accolades.

Related: What Did People Watch the Most on Netflix in January? Netflix Originals.
Awards Shows Film and TV Streaming