Hasbro’s Decision to Drop the ‘Mr.’ From Its Potato Head Brand Proves Unpopular

52% of U.S. adults said they disapprove of the name change, while 28% had no opinion 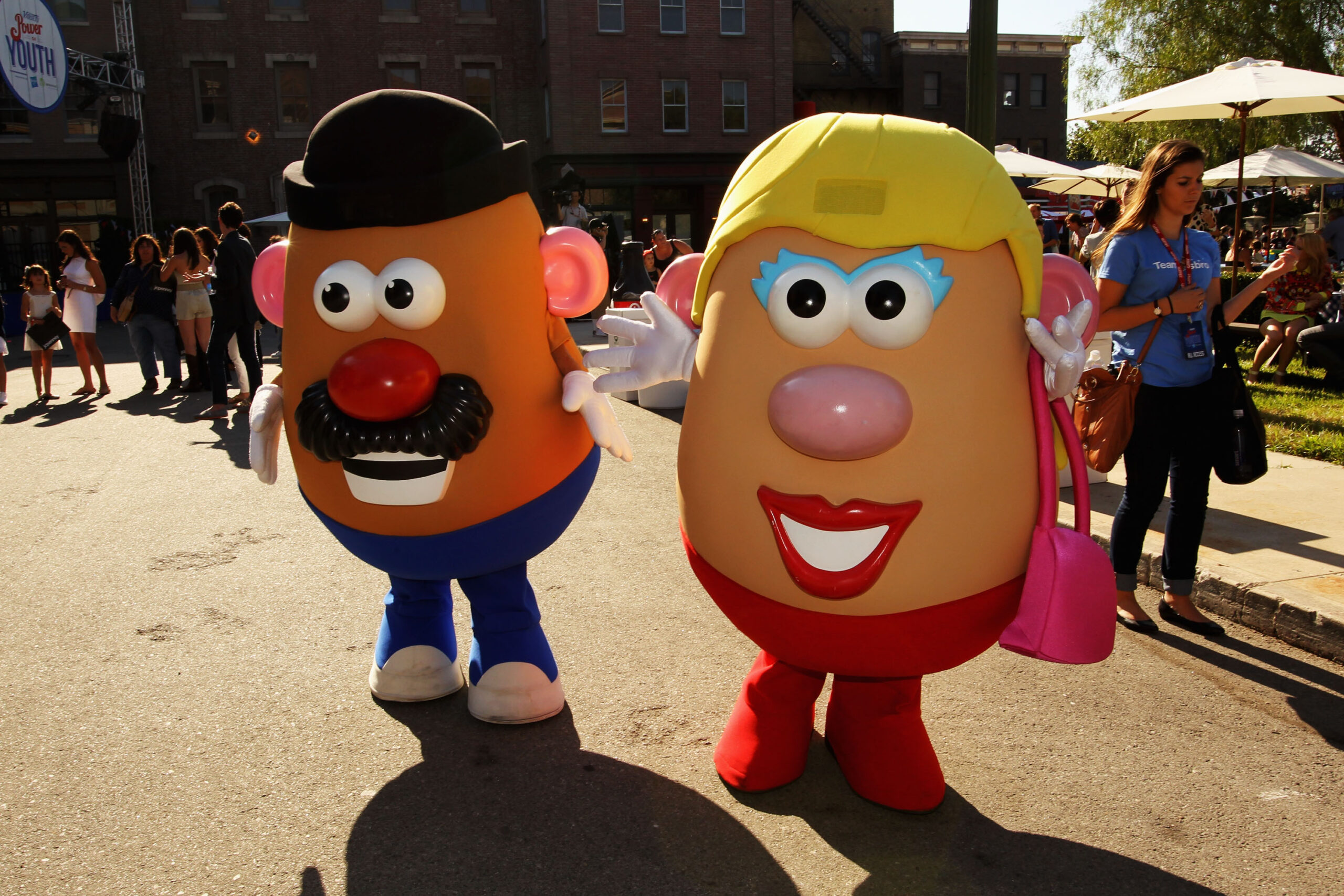 Last week, Hasbro Inc. sparked headlines and confusion online when it announced that it would lose the “Mr.” in its Potato Head brand name and logo, a move the toymaker said was intended to make the toys more inclusive, and one that new polling indicates largely upset consumers. 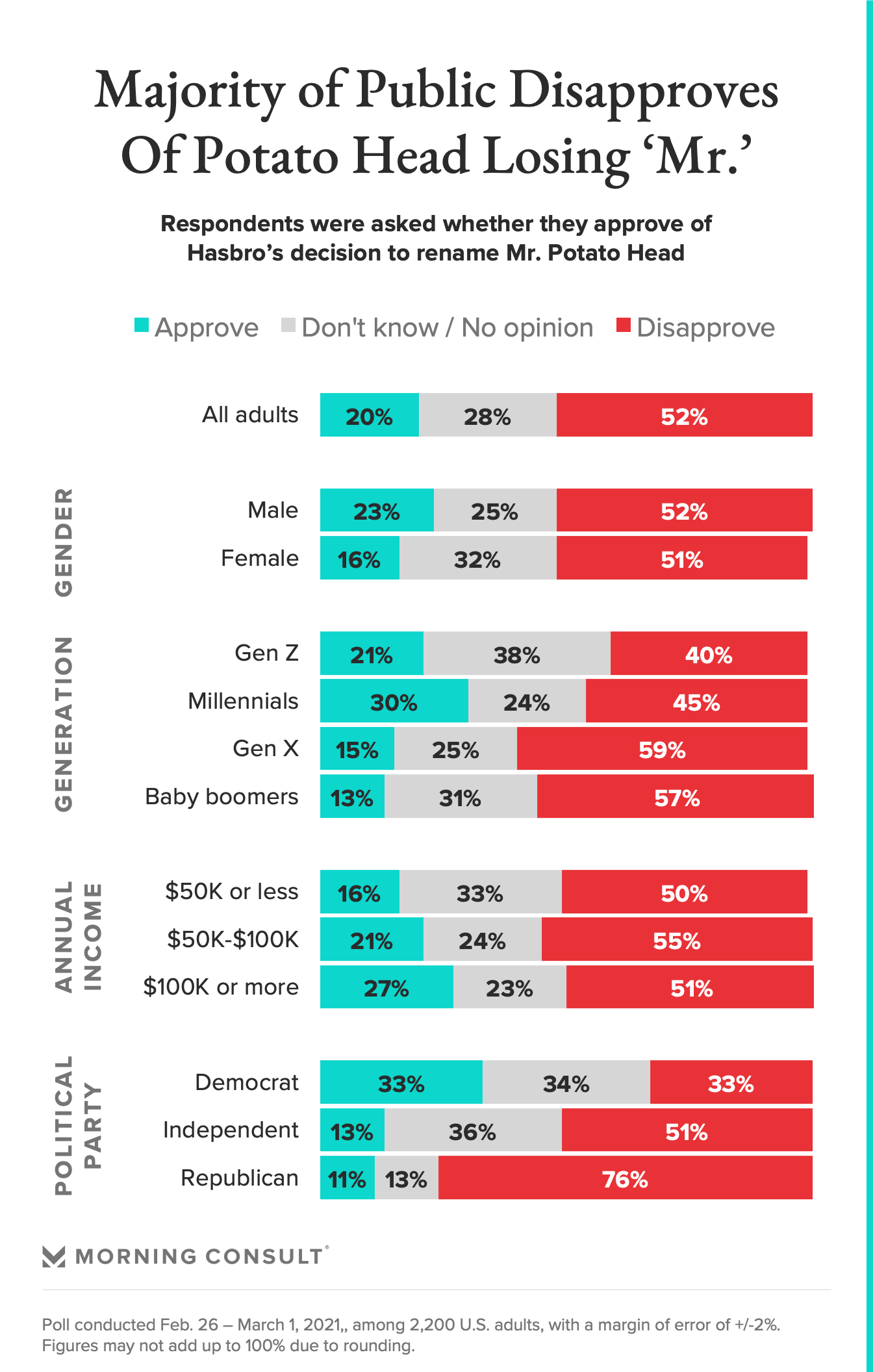 Roughly half (52 percent) of Americans said they did not approve of Hasbro’s choice to change Mr. Potato Head to Potato Head, according to a Morning Consult survey, conducted Feb. 26-March 1 among 2,200 U.S. adults. About one-quarter (28 percent) said they had no opinion on the matter, while 20 percent expressed support, creating a strong net negative sentiment for the new brand name.

Even among younger consumers — who tend to be more accepting of gender fluidity and conscious of brand values in general — opinions on Potato Head’s name change were more negative than positive: 45 percent of millennials said they disagreed with Hasbro’s decision, compared with 30 percent who said they supported the move.

Following confusion as to whether the decision would impact the individual characters, Hasbro clarified that, while the brand will change its name to Potato Head, the Mr. and Mrs. Potato Head characters will keep their respective titles.

The push to widen the scope of representation in kids’ toys extends beyond Hasbro. Mattel Inc.’s Barbie has expanded beyond its traditional female, white and blonde doll, creating its first gender-neutral dolls in September 2019 and adding accessories such as wheelchairs in recent years. American Girl, another brand owned by Mattel, added its first male doll to its lineup in 2017.

While Hasbro’s decision didn’t please everyone, it garnered some positive feedback from organizations such as GLAAD.

“Hasbro’s decision to introduce Potato Head as a gender-neutral toy is the latest move in a larger movement towards greater diversity and inclusion in toys and media aimed at kids,” said Chief Communications Officer Rich Ferraro in a statement to Morning Consult. “By offering a toy that exists outside of the binary of male and female, Hasbro is helping kids to simply see toys as toys, which encourages them to be their authentic selves outside of the pressures of traditional gender norms.”

The strongest disapproval came from Republicans: Members of the GOP were about as likely to disapprove of the Hasbro decision as they were to disapprove of President Joe Biden’s performance as commander-in-chief. Even Democrats were evenly split in their opinions.

Some political figures didn’t hesitate to weigh in on the Potato Head rebrand.

Donald Trump Jr. predicted the controversy would lead to a “non binary potato” after Rep. Matt Rosendale (R-Mont.) applauded the brand on Twitter for its clarification that the individual toys will still be known as Mr. and Mrs. Potato Head, a statement he interpreted as Hasbro “recognizing there’s only 2 genders.”