As $1.9 trillion relief bill moves to Senate, Democratic lawmakers looking toward the next reconciliation bill 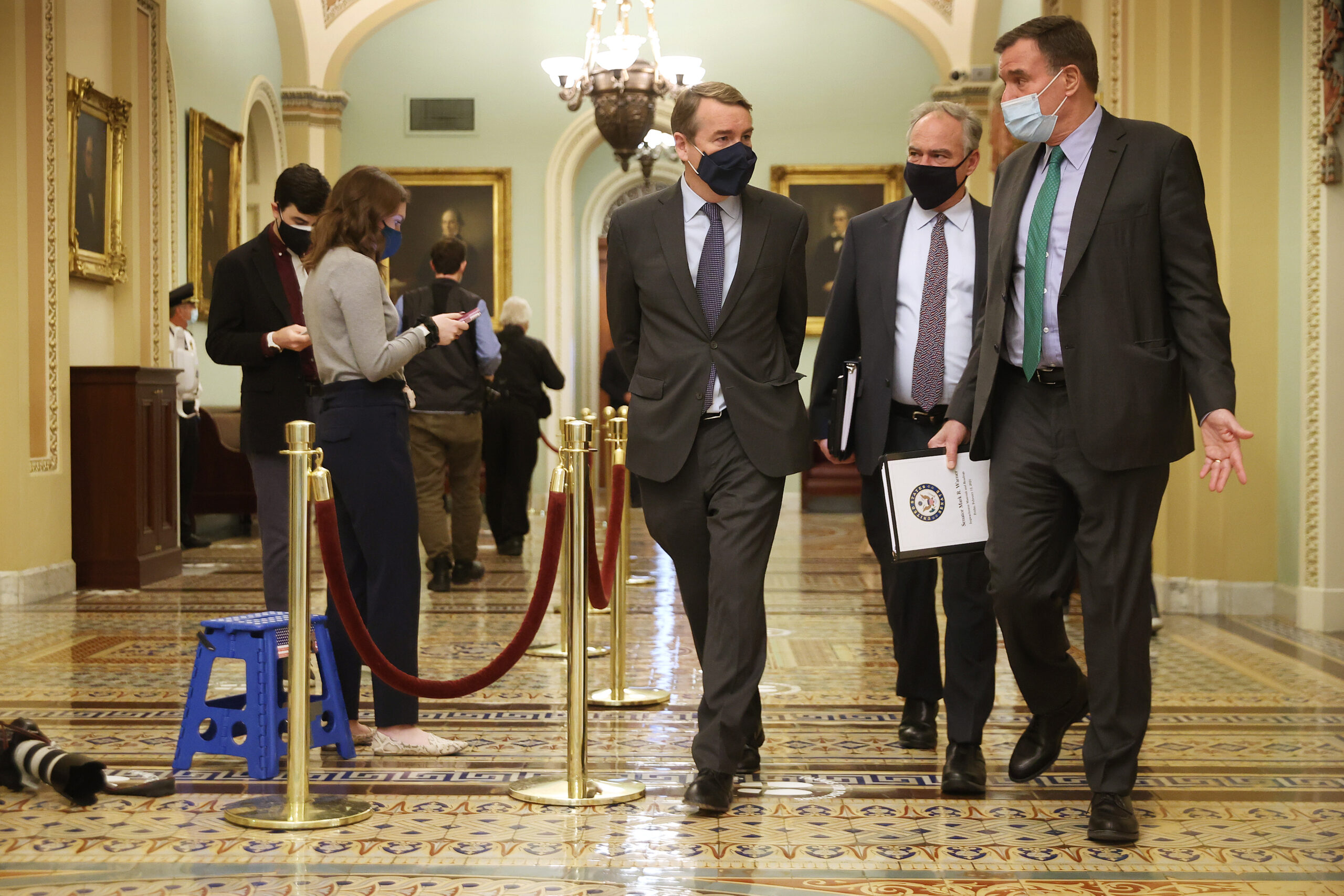 Sens. Michael Bennet (D-Colo.) and Tim Kaine (D-Va.), pictured here with Sen. Mark Warner (D-Va.) at the U.S. Capitol on Feb. 12, are pushing for a public option to be included in the next budget reconciliation bill, a plan they call "Medicare-X." (Chip Somodevilla/Getty Images)
By Gaby Galvin

As the COVID-19 relief bill works its way through Congress, some Democratic lawmakers are already eyeing future legislation with more substantial health care changes — including a public option.

The House passed its $1.9 trillion relief bill, which includes temporary health coverage expansions, over the weekend, and the Senate is scrambling to send a final package to President Joe Biden’s desk by March 14. At the same time, a group of congressional Democrats led by Sens. Tim Kaine of Virginia and Michael Bennet of Colorado are gearing up to push legislation that would introduce a public health insurance option as part of a plan they’ve dubbed “Medicare-X,” with the hopes of including it in a future reconciliation bill expected to focus on economic recovery and infrastructure.

Previous efforts to introduce a public option have floundered, and analysts viewed Biden’s campaign promise to add one as a long shot with a narrowly controlled Congress. But with Democrats weighing a second major budget reconciliation bill, which would require only a simple majority to pass, paired with the electorate’s appetite for broad health care reform, aides to Bennet and Kaine say they’re working to strike while the iron is hot.

In Morning Consult’s most recent poll on the issue in January, for example, 60 percent of voters, including 33 percent of Republicans, said adding a public health insurance option should be a priority for the Biden administration.

A Bennet aide billed the Medicare-X plan as Democrats’ first meaningful opportunity to expand on the Affordable Care Act, which originally included a public option that was later stripped out in an unsuccessful bid to win Republican votes. Tweaked to align with Biden’s health care priorities, the reintroduced Medicare-X proposal would phase in a public health insurance option in areas with a shortage of plans on the individual market exchanges before becoming available nationwide by 2025.

But the plan will likely face opposition from industry players who could view the introduction of a public option on the individual market as a “slippery slope” to a public option that cuts into employer-based coverage, said Loren Adler, associate director of the USC-Brookings Schaeffer Initiative for Health Policy.

“It’s hard to believe you won’t see some opposition to this from industry groups and obviously from Republicans — the traditional ‘socialized medicine’ type of arguments,” Adler said.

Some attacks have already begun. The Partnership for America’s Health Care Future, an industry group made up of private hospitals, drugmakers and insurance companies, lobbied against the public option when Biden became the Democratic nominee last summer and recently reiterated its opposition to the Medicare-X bill. The organization, which did not respond to a request for comment, has instead been in favor of steps such as expanding Medicaid in holdout states and increasing ACA subsidies, two issues addressed by the relief bill passed by the House last week.

“I’m still not confident it’s going to happen, but I think Democrats have to try,” said Shawn Gremminger, director of health policy at the Purchaser Business Group on Health, which represents dozens of private employers and public purchasers. “I have no doubt that it’s going to be a pretty epic fight.”

Lawmakers will also need to win support from their progressive colleagues, who generally prefer a single-payer approach that would eliminate private insurance. Rep. Pramila Jayapal (D-Wash.), chair of the Congressional Progressive Caucus, told House Speaker Nancy Pelosi and the White House she wants to see a public option included in the next reconciliation bill, according to Insider; her office did not respond to a Morning Consult request for comment.

Moderates in the House and all 50 senators, including Sens. Joe Manchin (D-W.Va.) and Kyrsten Sinema (D-Ariz.), would need to be on board as well. The Bennet aide said their team hoped some aspects of the Medicare-X proposal, like the fact that it would increase health plan competition in rural areas, would help win wary members over. But intraparty disagreement over the details of a public option could still threaten to sink the plan.

While it’s rare to pass two reconciliation bills in one year, some members of Congress, including Sen. Bernie Sanders (I-Vt.), have signaled they want to move quickly to the next spending bill once the current plan passes. Aides to Bennet and Kaine said they would push to include the Medicare-X proposal, which also touches on other health care priorities, including allowing for prescription drug negotiation through Medicare Part D and increasing Medicare reimbursement rates for rural providers.

Even if Democrats do corral the votes, the Senate parliamentarian could weigh in and determine some measures don’t pass muster for budget reconciliation, much like she did with the $15 minimum wage in the current relief bill. Ultimately, analysts said, if a public option bill does reach Biden’s desk, it could end up a far cry from the original proposal — much like the ACA.

“It’s going to have to include a whole lot of compromises to try to fit that very narrow path to success,” Gremminger said.