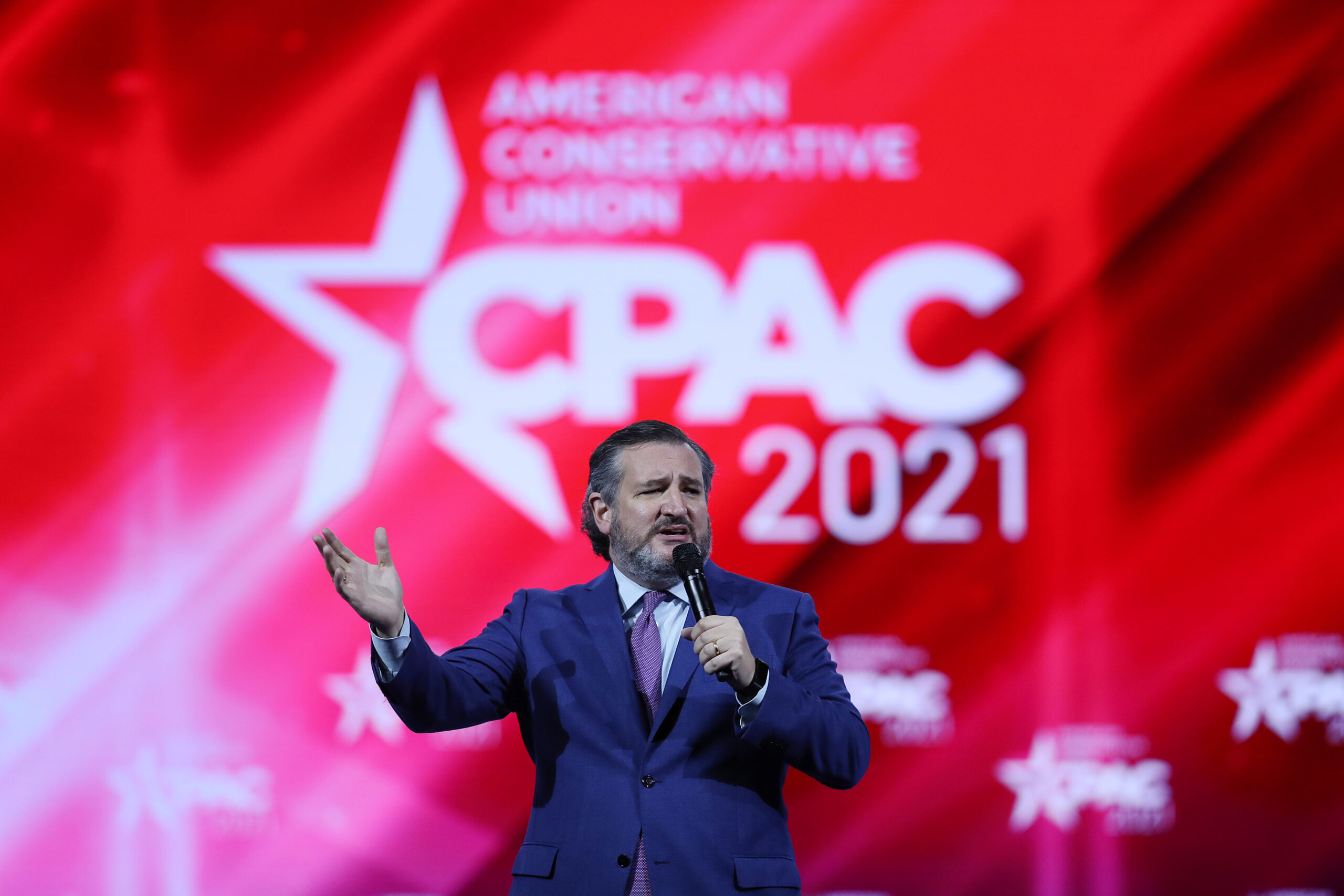 Sen. Ted Cruz addresses the Conservative Political Action Conference in Orlando, Fla., on Feb. 26. During the speech, the Texas Republican made light of his recent trip to Cancún amid his state's rolling power blackouts brought on by frigid storms, but Morning Consult Political Intelligence tracking shows that for some Lone Star State voters, it's no laughing matter. (Joe Raedle/Getty Images)
By Eli Yokley

Republican Sen. Ted Cruz left Texas for Mexico’s warmth and sunny beaches last month amid a crisis sparked by a surprise winter storm that left millions of Texans without electricity and potable water. The heat he’s facing now is coming from voters in his own state.

According to Morning Consult Political Intelligence tracking, the second-term lawmaker’s net approval rating — the share of voters who approve of him minus the share who disapprove — fell underwater in recent days, following a slight improvement from another slump pegged to his role in challenging the results of the 2020 presidential election.

The latest surveys, conducted Feb. 19-28, found 43 percent of Texas voters approve of Cruz and 48 percent disapprove – a reversal of his standing in polls conducted Feb. 9-18. Pictures posted to social media on Feb. 17 revealed he was traveling to Cancún, which sparked a public outcry that forced him to immediately return home on Feb. 18. 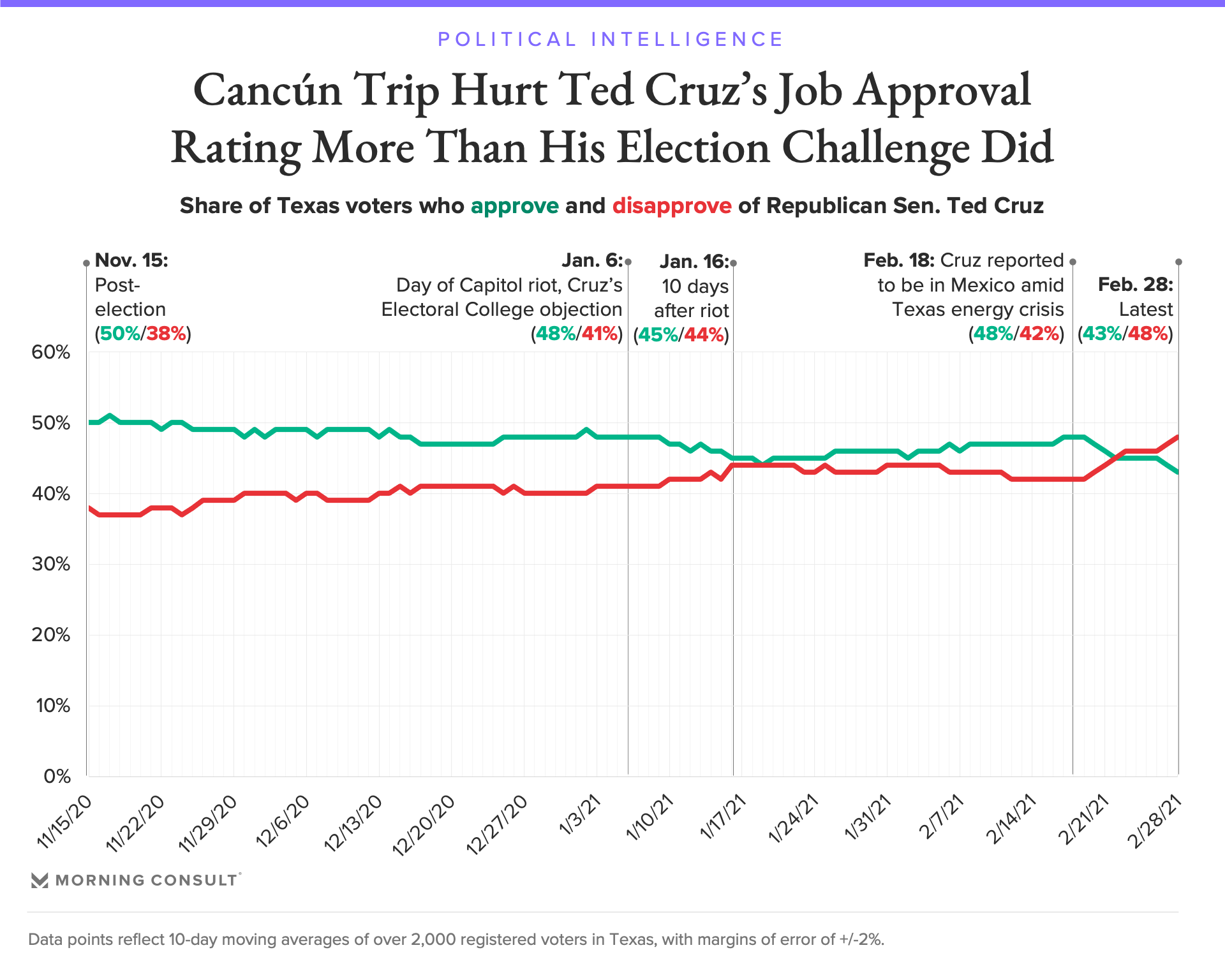 The double-digit drop in Cruz’s net approval rating from plus 6 to minus 5 is larger than the hit to his standing that followed his last major controversy, when supporters of President Donald Trump besieged the Capitol echoing claims of election fraud made by Cruz and others challenging Congress’ certification of the 2020 Electoral College result. Each poll was conducted among more than 2,000 registered voters in Texas, with margins of error of 2 percentage points.

The souring of views about Cruz was reflected in polling of Texas Democrats and independents, but was strongest among Republicans: Since the beginning of the year, the share of Texas voters in Cruz’s own party who approve of his job performance has dropped 10 points, with the bulk of the movement coming before the short-lived Cancún jaunt.

Still, 71 percent of Texas Republicans approve of Cruz, suggesting decent footing for the conservative firebrand, who over the weekend appeared confident that the worst of the controversy was behind him.

During Feb. 26 remarks at the Conservative Political Action Conference – around the same time President Joe Biden, Sen. John Cornyn (R-Texas) and Gov. Greg Abbott (R-Texas) were holding an event on Texas’ recovery – he joked about his Mexico trip to laughter from the conservative audience.

“I got to say Orlando is awesome,” Cruz told the Florida gathering. “It’s not as nice as Cancún, but it’s nice.”

The episode appears to have damaged his reputation more with Republican voters across the country – something of particular concern for a lawmaker who’s made no secret of his presidential aspirations and isn’t set to face Texas voters again until 2024.

After almost no movement in his favorability rating between Morning Consult/Politico surveys conducted right after the Jan. 6 riot and a little over a month before his Cancún trip, the share of Republican voters nationally with favorable opinions about Cruz fell 9 points in a poll after he returned from Mexico, to 49 percent, while the share who view him unfavorably increased 13 points, to 32 percent.

Still, Cruz is more popular nationwide than prominent Republican leaders such as Senate Minority Leader Mitch McConnell (R-Ky.) and House Minority Leader Kevin McCarthy (R-Calif.), and at home in Texas, his intraparty standing is on stronger footing than that of Cornyn, his senior colleague who was re-elected last fall.

Like Cruz, 7 in 10 Texas Republicans approve of Cornyn’s job performance, but they are 10 points more likely to favor Cruz strongly, 39 percent versus 29 percent. 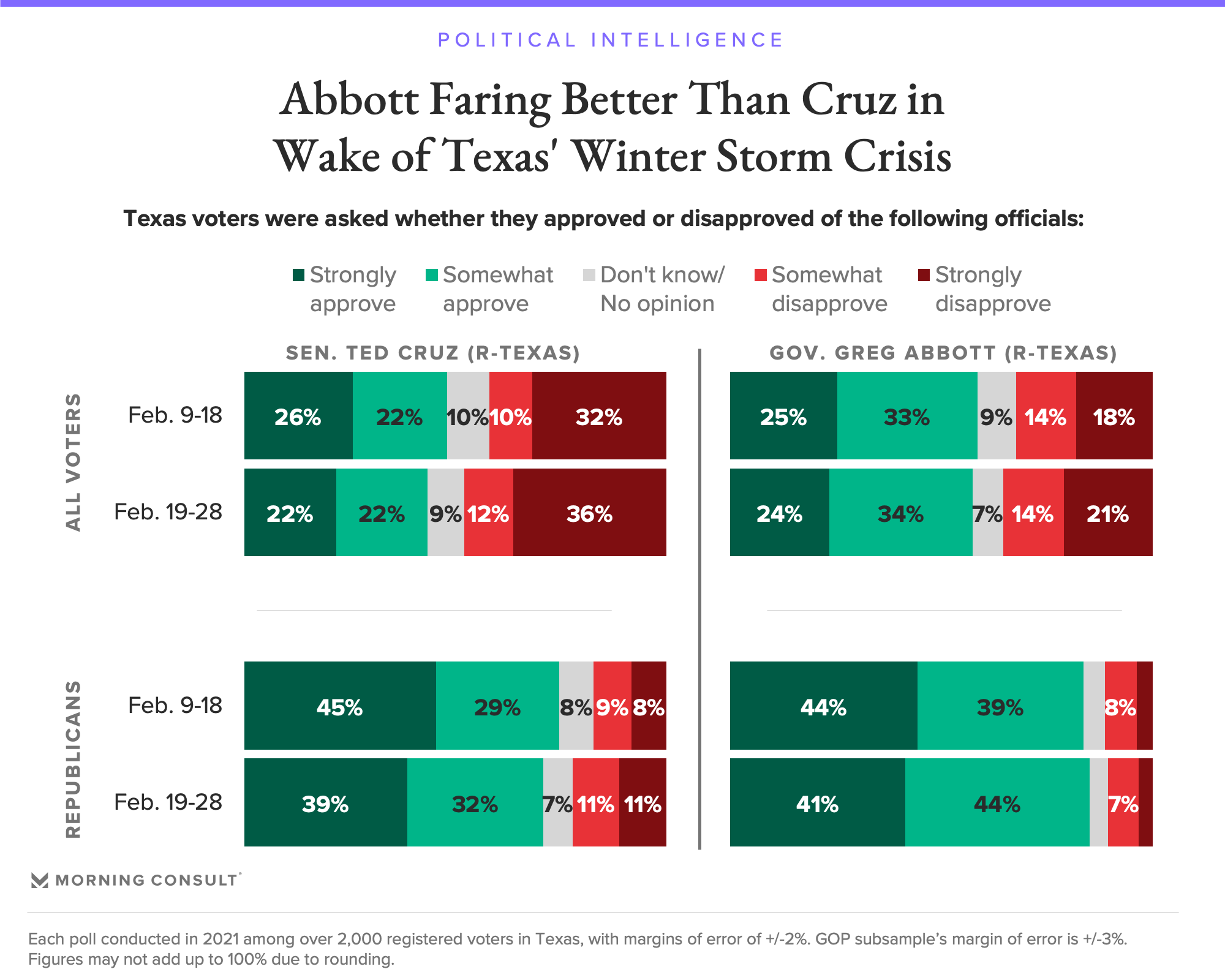 Both Cruz and Cornyn are less popular in Texas than Abbott (R-Texas), who has said he plans to seek a third term in next year’s elections. Among all Texas voters, 57 percent approve of the governor’s job performance and 35 percent disapprove.

The numbers have been pretty consistent throughout the year, and have gone unchanged  even as his administration has taken criticism for its handling of the winter storm and the related issues that left many Texans without electricity and clean water.

Among Republican voters, 85 percent approve of the second-term governor, including 41 percent who do so strongly, roughly matching where he began the year and the winter crisis.