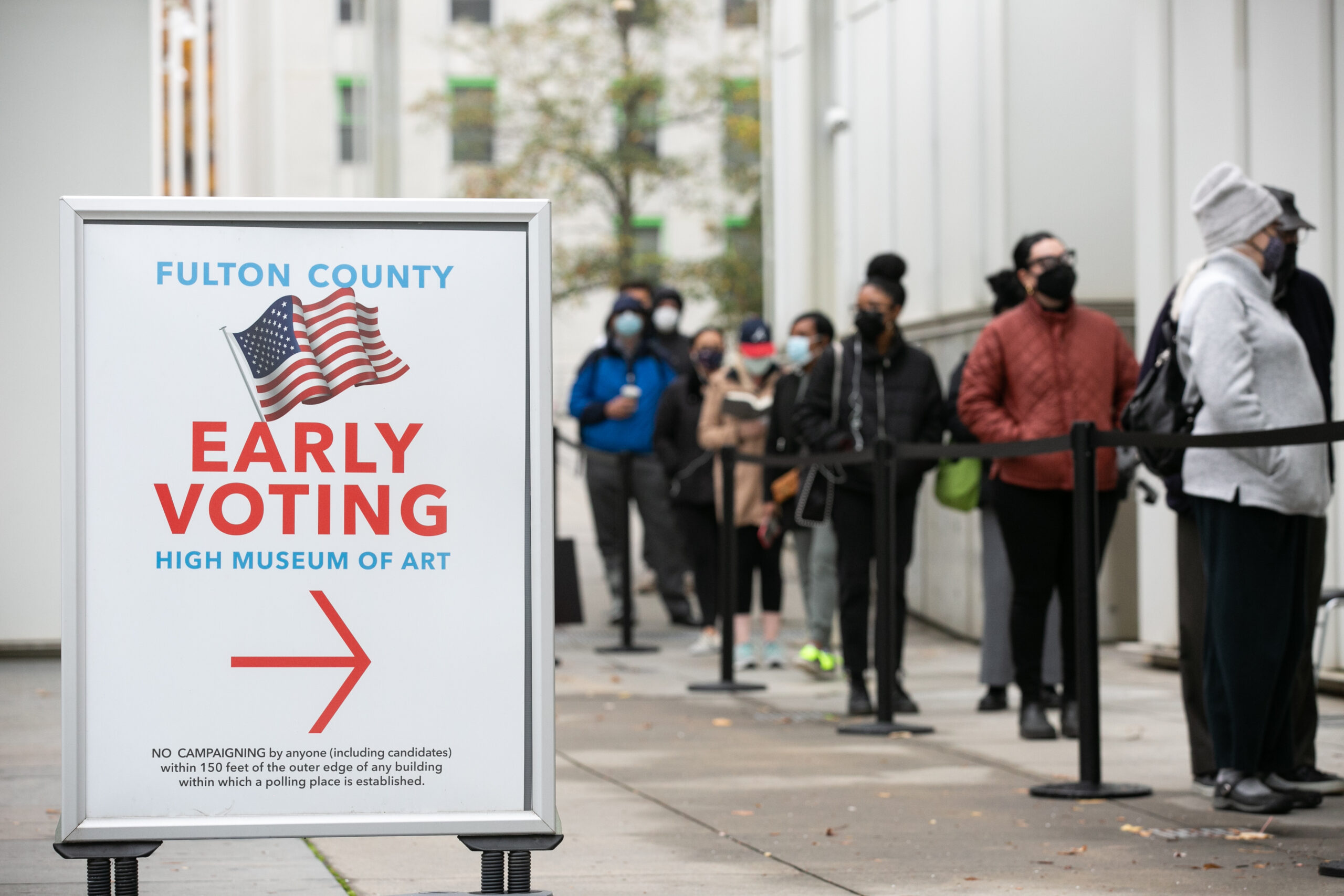 Voters line up for the first day of early voting outside of the High Museum polling station on Dec. 14, 2020, in Atlanta. A key provision in an election reform bill set to pass the House this week, which would establish two weeks of in-person early voting in federal elections, is backed by 7 in 10 voters overall and 55% of GOP voters. (Jessica McGowan/Getty Images)
By Eli Yokley

The House is set to pass legislation this week that would overhaul America’s policing laws and remodel the rules governing elections – two major Democratic priorities that hit a dead end in the Republican-led Senate during the last Congress.

This time around, the measures face similarly tough odds in the Senate due the slim Democratic majority, but new Morning Consult/Politico polling shows majority support among voters for key provisions in both bills.

When it comes to H.R. 1, the House’s sweeping elections reform measure, roughly 7 in 10 voters – including majorities of Republicans – support provisions that would require organizations engaged in political activity to disclose their large donors, ban the spread of false or misleading information in the two months before elections and establish two weeks of in-person early voting for federal elections. 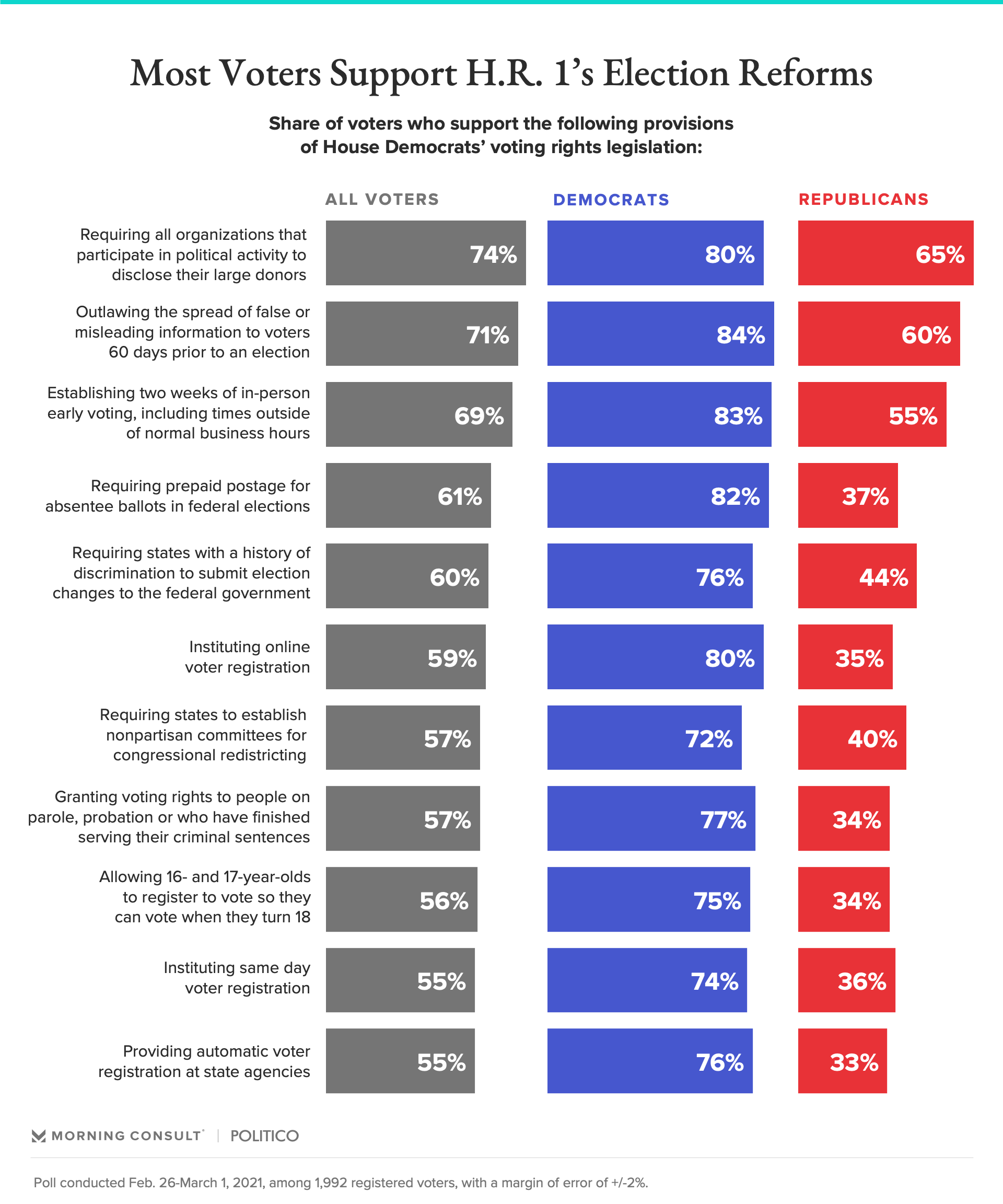 Other pieces of the bill, such as automatic voter registration or allowing people under the age of 18 to register to vote, run into opposition from the bulk of Republican voters, despite majority support from the overall electorate.

The poll was conducted Feb. 26 to March 1 among 1,992 registered voters, with a margin of error of 2 percentage points.

The Democratic push to advance the election legislation comes as voters trust Democrats on Capitol Hill more than congressional Republicans to handle voting rights by a 17-point margin, according to a Feb. 19-22 Morning Consult/Politico survey.

Along with its voting rights provisions, the legislation also includes rules meant to combat partisan gerrymandering and strengthen campaign finance rules and enforcement. It has become a piece of the Republicans’ attack on Democrats in their effort to win a House majority next year, with claims of federal overreach and attacks on public funding for campaigns.

Absent the abolition of the Senate’s legislative filibuster or the support of 10 GOP senators, the measure is likely dead on arrival in the other chamber – a reality acknowledged by House Majority Leader Steny Hoyer (D-Md.) on a call with reporters Tuesday.

“People say, how can you tell the American people you elected us and we couldn’t get it done? There’s a very simple answer: You need 60 votes in the U.S. Senate, and you elected 50 Republicans and 50 Democrats,” he said. “It’s frustrating because, yes, we have the majority in the U.S. Senate, but you and I both know, and the American people have seen a stark example, that you can have a majority of the Senate, but that doesn’t necessarily mean you control the Senate.”

Hoyer spoke of wide public support for key Democratic agenda items, including the COVID-19 relief package and forthcoming legislation on gun background checks and women’s rights. And similarly to the election legislation, key provisions in the other high-profile measure on the House’s docket this week — the George Floyd Justice in Policing Act — have bipartisan support. 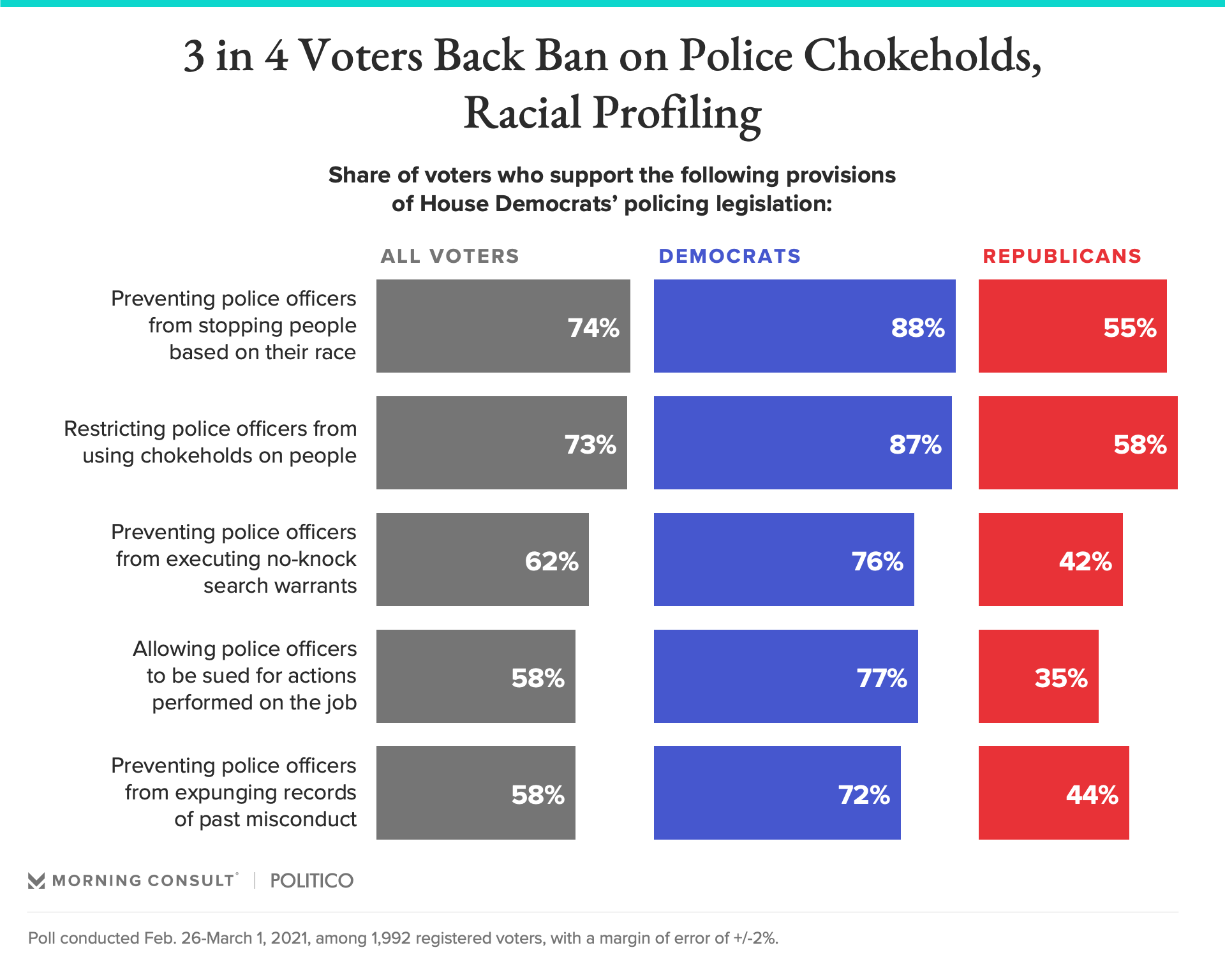 Nearly 3 in 4 voters — including 55 percent of Republicans — back a ban on racial profiling. Similar shares support a measure prohibiting police officers from using chokeholds, such as the one that killed Floyd and sparked Black Lives Matter protests last summer.

However, inclusion of a measure that would allow police officers to be personally sued for actions performed on the job continues to divide Democrats and Republicans: More than 3 in 4 Democrats support the civil liability provision, while just over a third of GOP voters say the same.