How Trump Could Help — and Hinder — the GOP’s Midterm Efforts

Some say the former president could unite Republican voters, but there are drawbacks 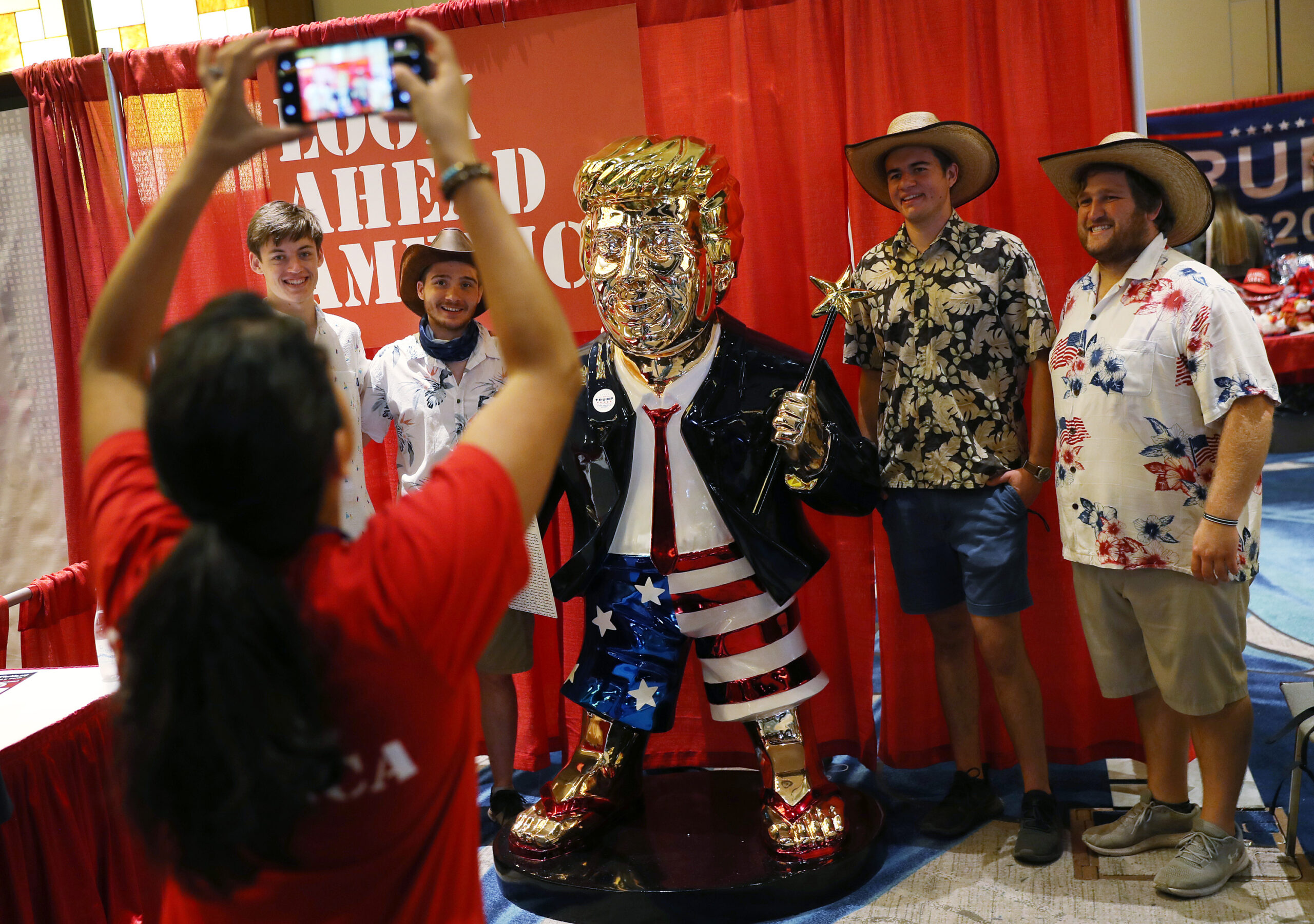 Conservative Political Action Conference attendees take a picture with a statue of former President Donald Trump on Feb. 27 at the conservative confab in Orlando, Fla. With Trump and Republican leaders forming something of an uneasy truce in recent weeks, the 45th president's grip over the party remains in tact, which could prove both a gift and a curse to Republicans' efforts to retake House and Senate majorities in next year's midterm elections. (Joe Raedle/Getty Images)
By Eli Yokley

The last time Republicans were out of power in Washington, a mostly leaderless group of conservatives banded together under the tea party flag in a quest for power on Capitol Hill. But now, a decade later and again out of power, the exiled movement has a figurehead in former President Donald Trump as the party prepares for the 2022 midterms.

“Trump isn’t an insurgent force in the Republican Party,” said Jesse Ferguson, a Democratic strategist who worked on the Democratic Congressional Campaign Committee’s independent expenditure arm during the height of the tea party movement. “He’s the conqueror.”

According to interviews with several campaign strategists and people involved in the campaigns of the early 2010s, Trump’s continued presence in the political arena brings a potential cohesive force for Republican voters that was missing in the insurgent wing’s tangle with the establishment a decade ago. But the base’s allegiance to one man who won’t be on the ballot next year could also cause challenges for the GOP, which blew the doors off of Democrats’ House majority in 2010 with a base energized against the previous Democratic president and his party’s policy agenda.

“I think the tea party energy was behind ideas – freedom, low taxes,” said former Rep. Chris Chocola, an Indiana Republican who led the conservative Club for Growth from 2009 to 2014. “The Trump thing is about Trump.”

A 2010 Washington Post survey of tea party groups found no clear leader of the wide array of organizations, many of which had different roles and motivations.

Trump isn’t an insurgent force in the Republican Party. He's the conqueror.

Some in the Republican Party, including Senate Republican Whip John Thune of South Dakota or House Republican Conference Chair Liz Cheney of Wyoming, have raised concerns about the viability of centering electoral hopes on a cult of personality, especially a personality that’s as divisive with Americans as the former president.

But others in the party have identified the 45th president’s presence as a potential unifying force, at least for Republican voters: 83 percent of them view him favorably, according to a recent Morning Consult/Politico poll, up 7 percentage points since a survey conducted after the Jan. 6 Capitol riot. At the same time, Morning Consult Political Intelligence tracking has shown that most Senate Republicans — particularly Thune and Senate Minority Leader Mitch McConnell — have lost favor with GOP voters in their own states after they placed even the slightest distance between themselves and the former president before his impeachment trial.

In the early days of his post-presidency, Trump has threatened to take on the Republicans who dared to defy him on the floors of the House and Senate chambers. So far, he’s only endorsed a primary challenger who is going up against Rep. Anthony Gonzalez (R-Ohio), though he made clear in his remarks at the annual Conservative Political Action Conference that he wants to “get rid of” all 10 House Republicans who voted for his impeachment after the Jan. 6 riot on Capitol Hill, as well as the seven Senate Republicans who backed his conviction. Just one GOP senator who did so — Lisa Murkowski of Alaska — is up for re-election next year.

Trump has also been highly critical of McConnell, and called for his ouster. But during remarks at CPAC, his critiques of McConnell were muted after the Kentucky Republican told Fox News he would be willing to back Trump if the former president secured the Republican presidential nomination in 2024.

In recent days, Trump has endorsed two incumbent Republican senators: Jerry Moran of Kansas, who was censured by a local Republican Party for upholding Biden’s Electoral College victory, and Tim Scott of South Carolina, who has largely sought to avoid intraparty fights. The endorsements show Trump’s potential to help the party’s efforts to avoid unnecessary primaries, as sought by leaders of the House and Senate Republican campaign arms.

But some others want him to go the other way – even viewing primary skirmishes as a political incentive to juice his supporters to support the GOP next year. In a Tuesday call with Trump supporters on the social audio app Clubhouse, Rep. Matt Gaetz (R-Fla.) said the GOP needs to see an aggressive primary season — one where some incumbent Republicans lose, like they did in 2010 — in order to rekindle tea party-style energy under the “America First” banner to take back seats next November.

That primary itch has raised talk, particularly among Democrats, about the possibility of bruising primary fights for the GOP that could hinder its efforts to win back the House and Senate next fall, with much of the early Senate battleground forming in states with open-seat races where no incumbent Republican is on the ballot – prime territory where the Trump loyalty fight is already starting to play out.

“If the end result is you’re going to get the Richard Mourdocks, Todd Akins and Christine O’Donnells of the world who provide a stark contrast with Democrats who want to get actionable things done for working families, the results could be the same as 2010, in that we hold the Senate, or actually build on it,” veteran Democratic strategist and 2020 Biden campaign pollster John Anzalone said, naming tea party candidates who lost general-election campaigns in 2010 and 2012.

Anzalone said Democrats should stay out of the Trump talk and instead focus on their popular agenda items such as the COVID-19 relief package and the party’s push for a minimum wage increase, which are both backed by roughly 7 in 10 voters. He also noted the public at large has even started to come around to Democrats on some parts of immigration reform, like a pathway to citizenship for undocumented migrants, after Trump sought to leverage anti-immigration sentiment among his base.

Brian Walsh, a Republican strategist and former official at the National Republican Senatorial Committee who was around for the intraparty battles of the early 2010s, said Republicans should indeed be ready to fight the 2022 campaign as a referendum on Biden. And in a nod to NRSC Chairman Rick Scott’s recent declaration that the GOP civil war is “canceled,” he said the early talk of major internal consternation following a slate of 2020 losses is likely overblown.

For starters, Walsh said, the former president has made clear he doesn’t like losers – a potential place of unlikely alignment with McConnell, a born-again Trump skeptic whose only stated goal in primary elections is to back candidates who can win in November, as he said in a recent interview with Politico.

And then there is the traditional midterm disadvantage for the party in power.

“It’s not an ideal situation, in that you would like to be laser-focused on the Democratic agenda,” Walsh said. “Generally, a midterm is a referendum on the party that controls the White House, and to the extent that we can keep the attention focused on that – look what happened in 2010.”