Old Movies and Tom Cruise: What Consumers Associate With Paramount+ 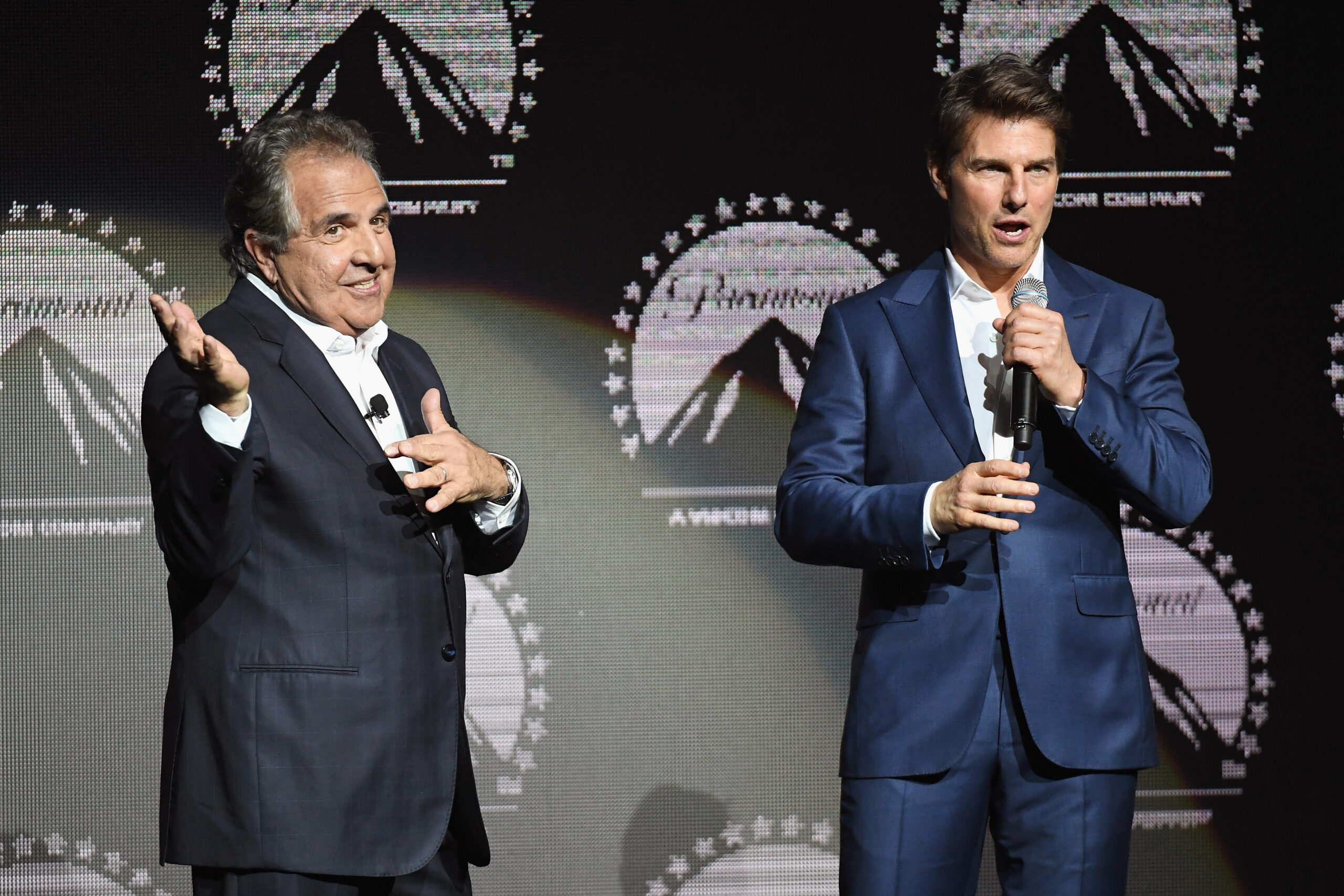 Snooki, Dora the Explorer and Stephen Colbert are climbing a mountain.

That’s not a setup for a bad joke, but rather ViacomCBS Inc.’s pitch to highlight the variety of content offered to consumers by its rebranded Paramount+ streaming service when it launches Thursday. And new polling shows consumers are more likely to associate films and broadcast TV with the rebrand.

For the past six years, ViacomCBS has courted streaming-inclined consumers with its CBS All Access streaming service, featuring popular shows from the broadcast network such as “NCIS” and “Big Brother.”

As it rebrands and adds content from other ViacomCBS properties — including MTV, Comedy Central and Paramount Pictures — the streamer faces a challenge other media companies have had to tackle in recent years: how to select a master brand to represent the array of properties within a company’s portfolio.

For a platform with as many brands as ViacomCBS, that’s a herculean task.

“It has to carry some weight with consumers,” said Jim Spaeth, partner at Sequent Partners, a brand and media metrics consultancy, said of selecting an all-encompassing brand name. “It’s got to be recognizable and it’s got to stand for what you want to stand for.”

To better understand how consumers felt about the CBS All Access brand versus the new Paramount+ name, a Feb. 18-21 Morning Consult/The Hollywood Reporter survey gave respondents a blank space and asked them to fill out what they think of when they hear or see either phrase. 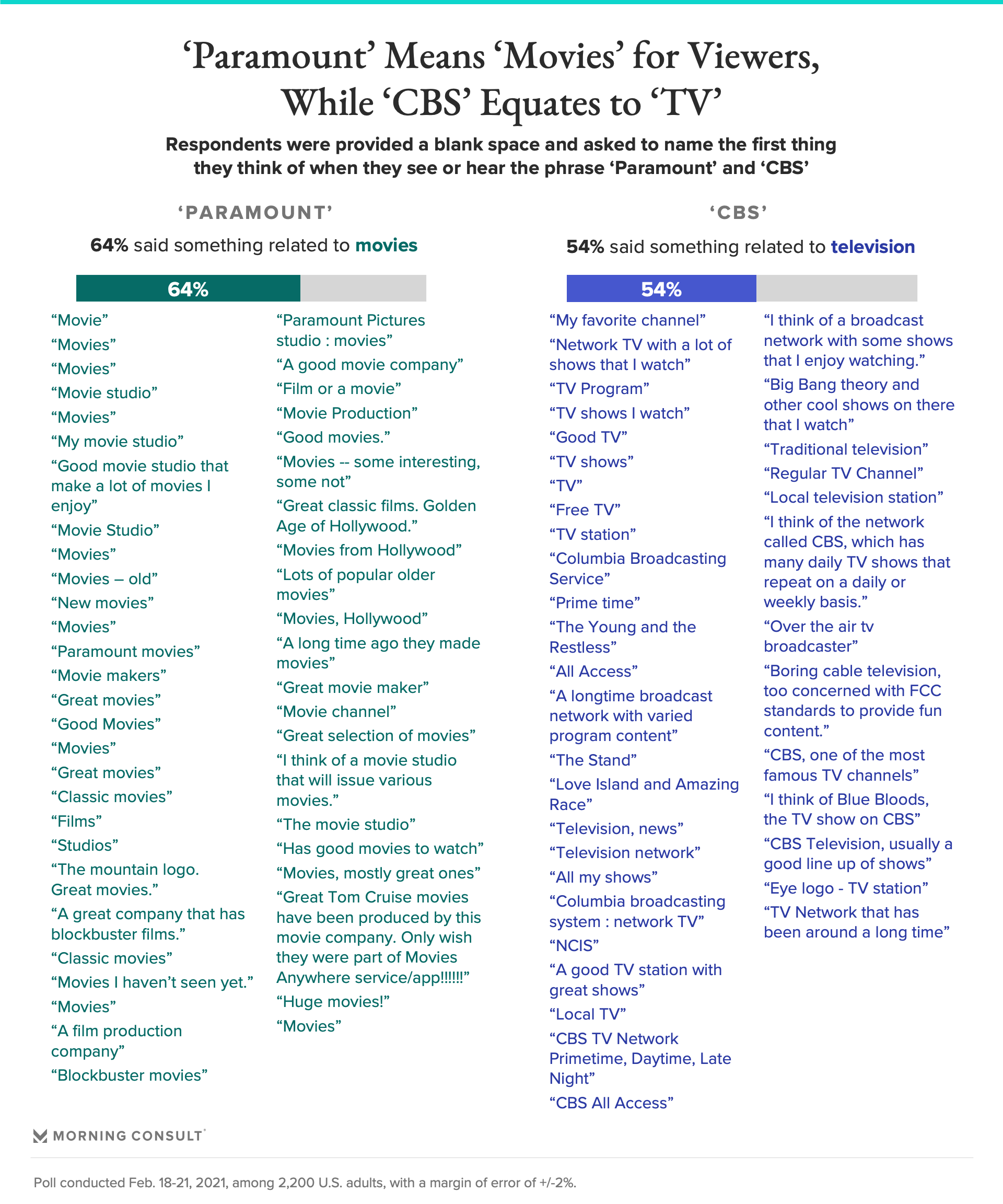 Some respondents named long-running programs that air on the network, such as “The Price is Right,” which celebrated 49 seasons last year, or “Blue Bloods,” which has been on the air for 11 seasons.

“Great news and sometimes has football on during the fall,” wrote one respondent. Another added, “National broadcast channel that offers news, sports, sitcoms, reality shows and other content. The channel is nostalgic and traditional.”

Related: Paramount+ Is Entering a Crowded Streaming Market. What Will Make Consumers Subscribe?

When it came to Paramount, consumers overwhelmingly associated the brand with movies. Some mentioned older, classic films, such as “The Godfather,” while others replied with recent blockbusters and current stars, such as “Star Trek.”

“Great Tom Cruise movies have been produced by this movie company. Only wish they were part of Movies Anywhere service/app!!!!!!” said one respondent.

Three percent of adults associated Paramount with TV, and 2 percent said they thought of the ViacomCBS-owned television channel, Paramount Network.

“Paramount is a movie brand,” said Eric Dahan, chief executive of the influencer marketing agency Open Influence. “Using it as a streaming brand name can be a little confusing because what works really well on streaming is not one-off movies, but more so series.”

“If people are not tying that brand to those series, into that original content, then there could be some issues,” he said.

CBS All Access, which costs $5.99 a month for an ad-supported plan and $9.99 a month for a commercial-free plan, had 19.2 million domestic subscribers as of the fourth quarter of 2020 when combined with Showtime, BET+ and other ViacomCBS paid streaming services. The streamer stepped into the world of original content in February 2017 with the critically acclaimed drama “The Good Fight,” with several “Star Trek” series soon following.

Paramount+, which will launch with a premium, commercial-free tier priced at $9.99, will introduce an ad-supported tier in June priced at $4.99. The new service will also expand its original content offerings, such as exclusive programs based on popular series, including “The Challenge: All Stars” and “The Real World Homecoming: New York,” along with revivals of shows including “iCarly,” “Frasier” and “Criminal Minds.”

Kelly Day, chief operating officer of ViacomCBS Networks and president of international streaming, said in an interview with The Hollywood Reporter that the Paramount brand has strong international recognition. Ninety-one percent of people know the brand and recognize the logo, she said, citing company research conducted last summer, while 96 percent had a positive association with it.

The company is also relying on Paramount Pictures’ library of older films to attract consumers, as well as its upcoming film slate, with titles such as “A Quiet Place Part II” and “Mission: Impossible 7” hitting the service 30 to 45 days after they debut in movie theaters. 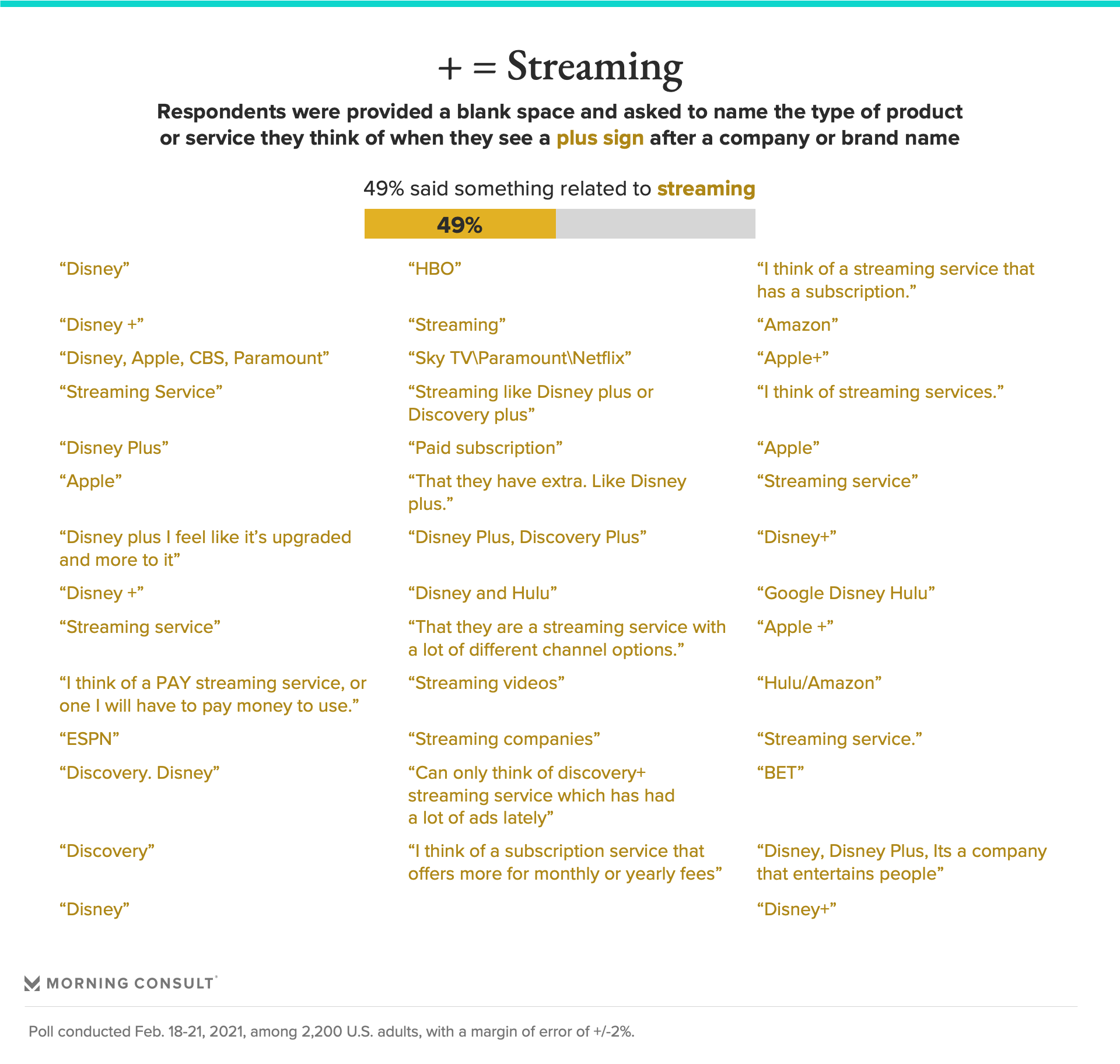 The rebranded streamer follows the likes of Disney+, Apple TV+ and Discovery+ by tagging a plus sign onto the service’s name.

The Morning Consult/The Hollywood Reporter survey found that the plus sign has become synonymous with streaming for much of the public. When asked what product or service they think of when they see the symbol, nearly half of consumers gave an answer related to streaming services. Many named existing services, while others thought more broadly.

And while the symbol makes it easier for consumers to tell what type of service Paramount+ is, it doesn’t help a service set itself apart from the competition.