Morning Consult economist John Leer writes that stubbornly high unemployment, the state of low-income workers’ finances and the slow distribution of jobless benefits are among the reasons that fears of an overheating economy are overblown 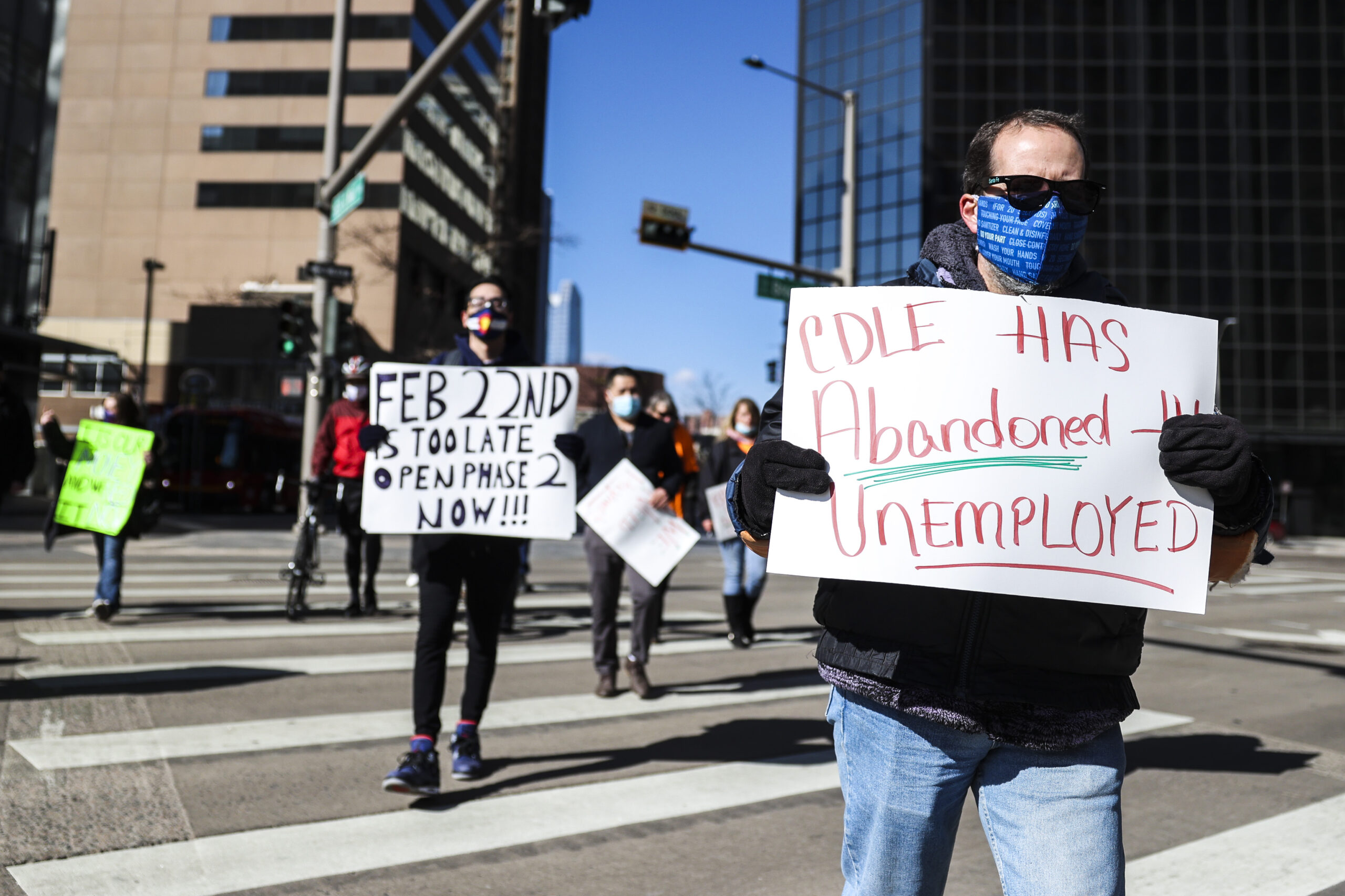 Colorado Department of Labor and Employment came under fire on Feb. 8, 2021, in Denver after people complained that they hadn't received unemployment assistance since November. The slow distribution of unemployment benefits is one of the reasons that increased payments to the jobless will not drive up inflation, according to Morning Consult economist John Leer. (Michael Ciaglo/Getty Images)
By John Leer

With inflation concerns on the rise, there’s increasing focus on the long-run inflation outlook. Financial markets are worried about sharp increases in inflation while Federal Reserve Chairman Jerome Powell said Thursday that the Fed will remain “patient” before raising interest rates to combat inflation.

Morning Consult’s proprietary data on employment outcomes and expectations, which offers insight into the trajectory of inflation beyond any near-term, one-off bounce back in prices, backs up Powell’s stance. I analyzed the data to assess the likelihood of price increases this year setting off persistent increases in inflation large enough to drive the Federal Reserve to increase interest rates next year.¹ The data shows that although pent-up demand for services among workers increasingly secure in their jobs complicates the near-term inflation outlook, the ability of the service sector to hire additional workers at stable wages limits the likelihood that demand increases will translate into persistent inflation. This analysis holds true even without presupposing a rule-like relationship between inflation and unemployment such as the Phillips curve.

Employment outcomes and expectations exert inflationary pressures through two channels. First, if workers suddenly have more money to spend, the increase in the demand for goods and services may outpace an increase in the supply, driving up prices. Second, if workers’ wages increase, companies may pass on a portion of the increases in labor costs to consumers by raising the prices of goods and services.

Given the nature of the pandemic-induced recession, employment is more critical to understanding inflation than it has been in the recent past. Weaknesses in spending remain heavily concentrated in the service sector, particularly health care, transportation, recreation and food services and accommodation. For these sectors, labor costs are one of their primary variable costs and constraints to quickly expanding their operations. If service-sector companies are able to quickly bring on additional workers at reasonable wages, they should be able to scale up capacity to meet demand without having to pass on additional costs to consumers.

This analysis finds that employment conditions will exert deflationary pressure on the U.S. economy over the next year, limiting the likelihood that short-term price increases translate into long-term inflation. The pandemic and recession have severely negatively affected low-income Americans’ jobs and finances. Government stimulus and enhanced unemployment benefits have supported consumer spending over the past 11 months, and more stimulus will be necessary to support spending at the low-end of the income spectrum through the end of 2021.

While increasing job stability will allow those with jobs to spend a greater share of their incomes, the path to employment for those still unable to find work will be extremely difficult. Persistent long-term unemployment at the low-end of the income spectrum will exert downward pressure on labor costs in service industries preparing to scale up their operations, keeping inflation low for the foreseeable future. In addition to employment indicators, long-run, secular trends such as well-anchored inflation expectations and sluggish productivity growth will increasingly counterbalance any transient inflationary pressures.

Persistent and elevated pay cuts among low-income adults have exerted downward pressure on labor costs during the pandemic. As seen in the chart below, pay outcomes improved in January and February, particularly for high-income adults. However, after experiencing nearly 12 months of elevated losses in pay and income, it is highly unlikely that workers at the low-end of the income spectrum will experience wage increases until much further into the recovery.

Prior research from Morning Consult and Moody’s Analytics found that the pandemic exerted moderate downward pressure on workers’ willingness to bargain with their employers in aggregate, and particularly on low-income and less well-educated workers who disproportionately experienced a loss of pay or income during the pandemic. Consequently, unit labor costs are unlikely to increase as the recovery gathers momentum, allowing companies to increase the supply of the services they provide without experiencing upward pressure on labor costs. 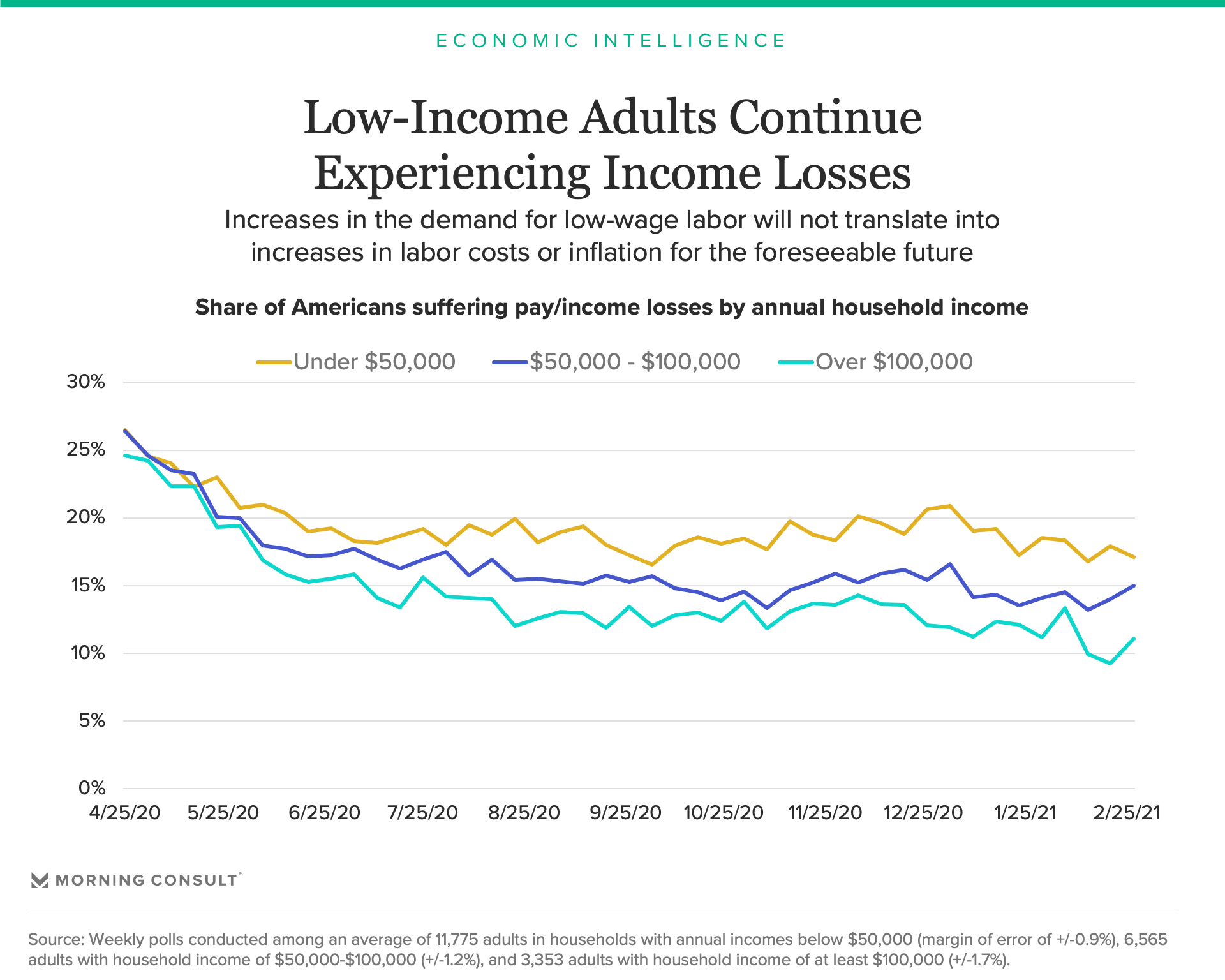 Additionally, unemployment recipients will have to pay taxes on the benefits they received in 2020, effectively draining the system of some of the stimulus provided as part of the CARES Act of 2020. 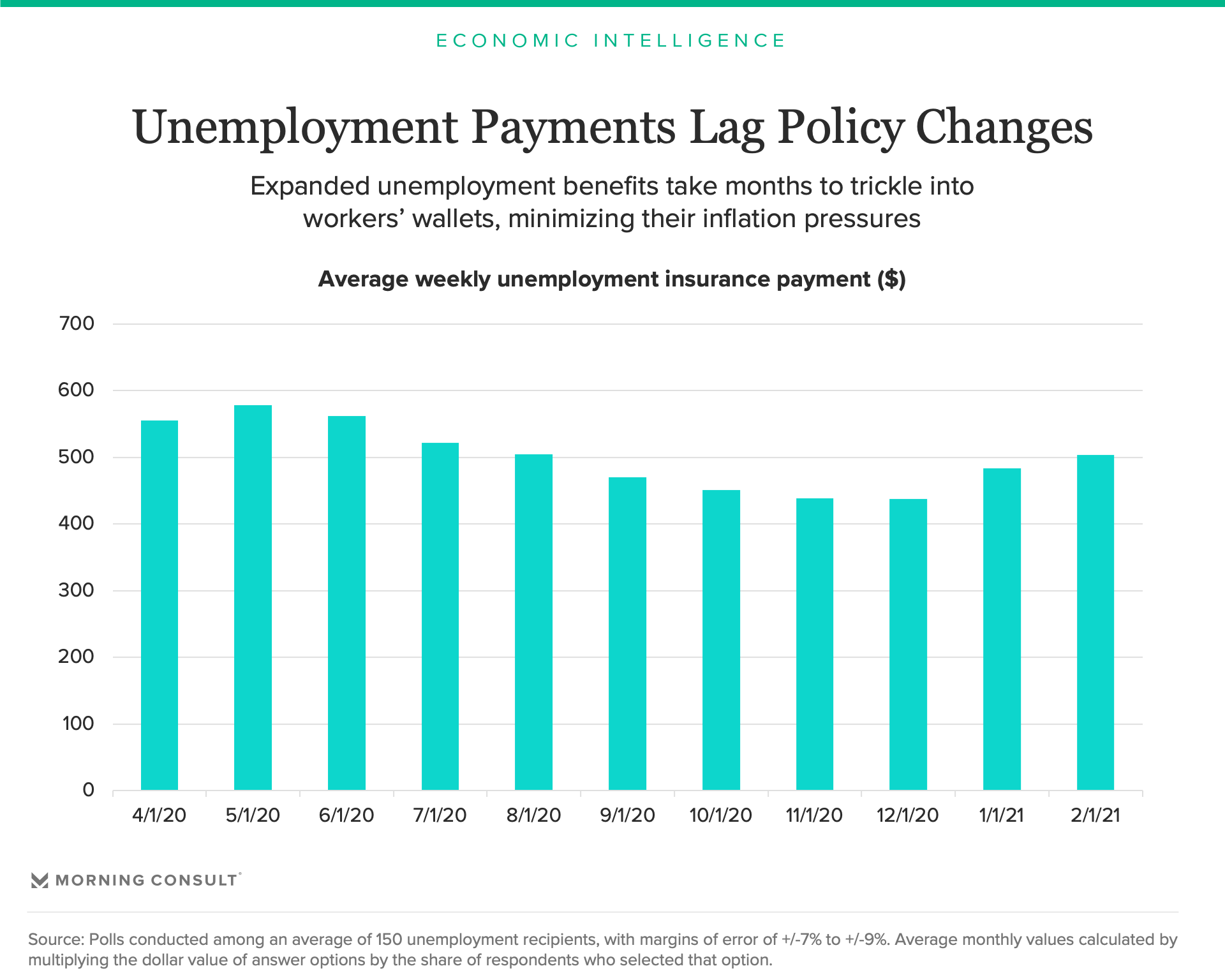 As previously described, this data offers unique, necessary insight into the distribution of savings. While consumers in the aggregate have stockpiled cash during the pandemic, millions of new adults have become financially vulnerable since May. Additional stimulus targeted to these adults would go toward paying their bills, repaying missed rent and mortgage payments and rebuilding their depleted savings, none of which would materially increase consumer spending. 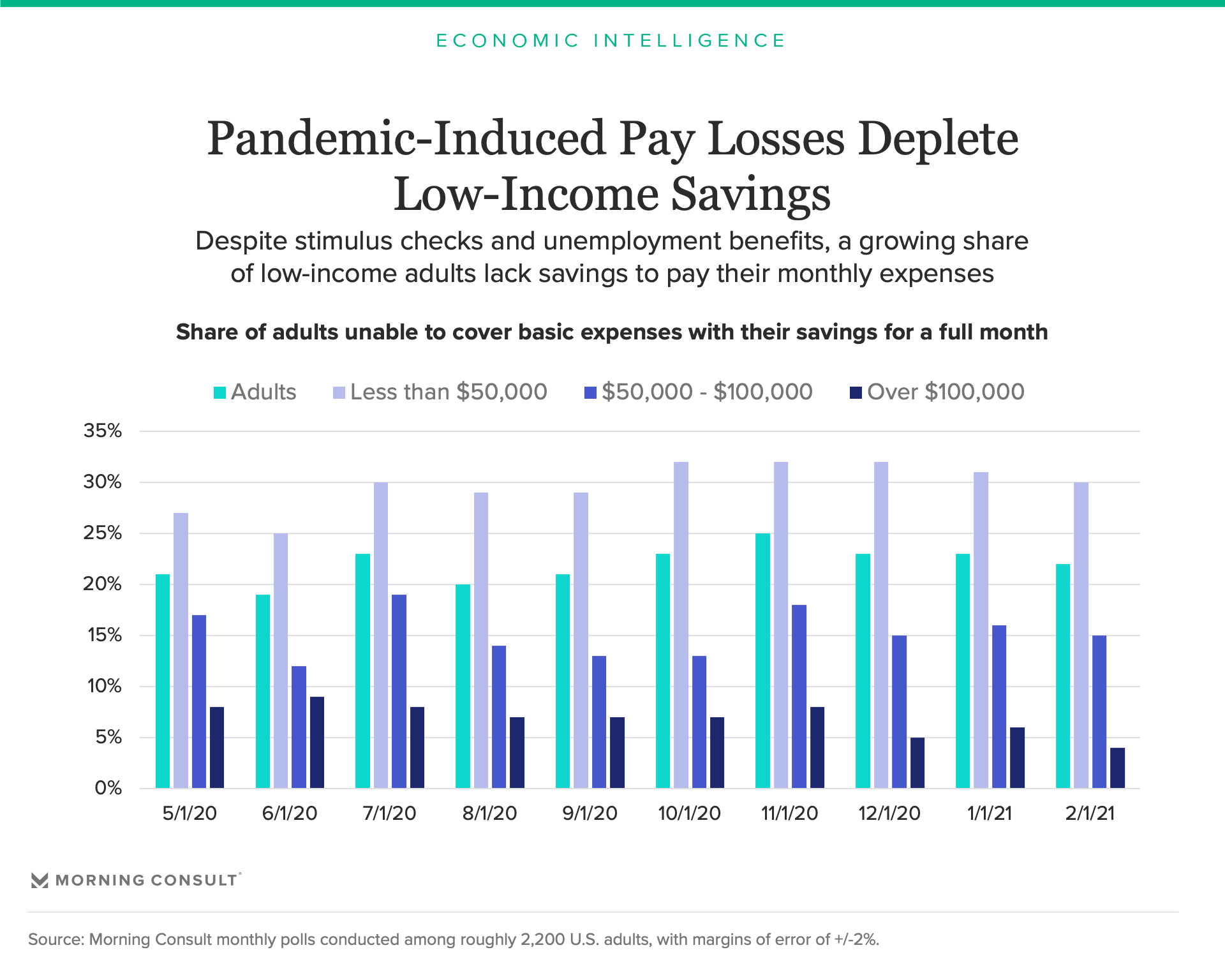 Increases in job security will exert upward pressure on demand as workers feel more comfortable spending a greater share of their income, but consumers’ gradual willingness to return to normal should allow suppliers to adjust to increased demand before having to consistently increase prices.  As the recovery gains momentum, workers not only will feel more comfortable spending money, they will also increasingly have the ability to spend money on services that have remained in limited supply during the pandemic. In February, 17 percent of employed Americans expected to lose pay or income in March, down from 22 percent in January, an indication that the employment recovery in March will be stronger than it was in February. 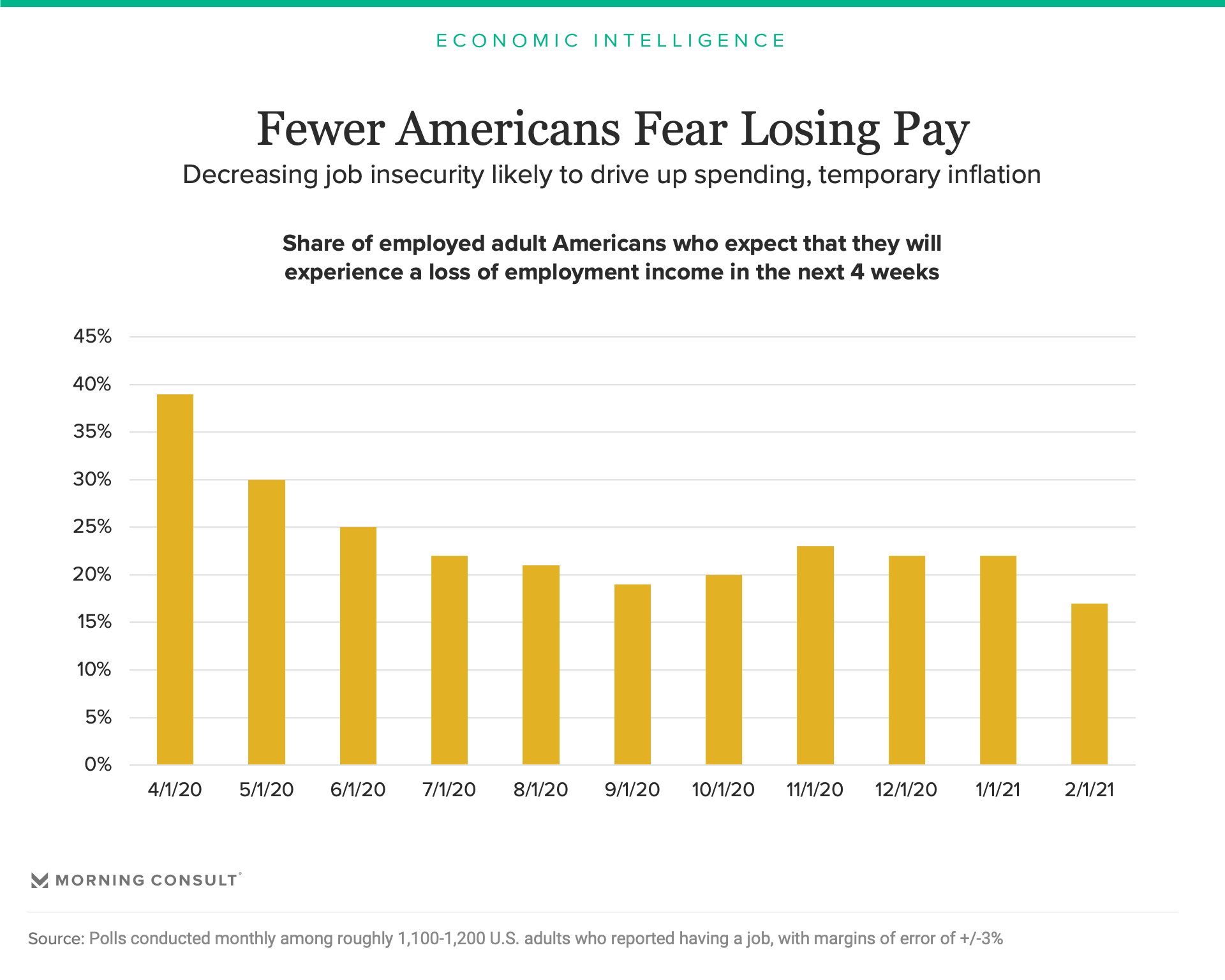 As restrictions on service-sector spending are gradually eased, pent-up demand from workers with increasing levels of job security should translate into increases in spending, but data suggests that supply will quickly catch up with demand, limiting price pressures. For example, in the case of dining out, Morning Consult’s weekly dining comfort tracker consistently shows that adults intend on staggering their return to restaurants.

In the short-term, there are likely to be pockets of transitory inflation due to base effects, meaning initial change in prices are high relative to where they are currently. These effects are purely a function of arithmetic and will dissipate unless prices increase at an increasing rate. But an acceleration in prices is highly unlikely. As demand increases, restaurant capacity will adjust accordingly, supported by the large supply of unemployed workers (see below). Additionally, the increases in service-sector spending will exert downward pressure on some of the pandemic-induced increases in demand for and prices of consumer durable goods.

Unemployed workers increasingly acknowledge the need to find work with new employers, providing rapidly growing service-sector companies a deep inventory of workers to meet growing demand. For the past 11 months, unemployed and furloughed workers have grown progressively less optimistic about their chances of returning to work for their prior employers. Importantly, this trend reflects workers technically included in the labor force by the Bureau of Labor Statistics as well as those who are no longer looking for work. As shown in the chart below, although there were signs of increased optimism in January and February relative to December, the broader trend points to unemployed workers increasingly acknowledging their need to find a new employer. However, finding work with a new employer takes time and decreases the likelihood that unemployed workers will rapidly return to work this summer.

In other words, even as employed workers drive inflation via strong demand, persistent unemployment, particularly at the low-end of the income spectrum, limits cost pressures and should allow those companies or industries to rapidly scale up capacity to meet increased consumer demand without facing increased labor costs. 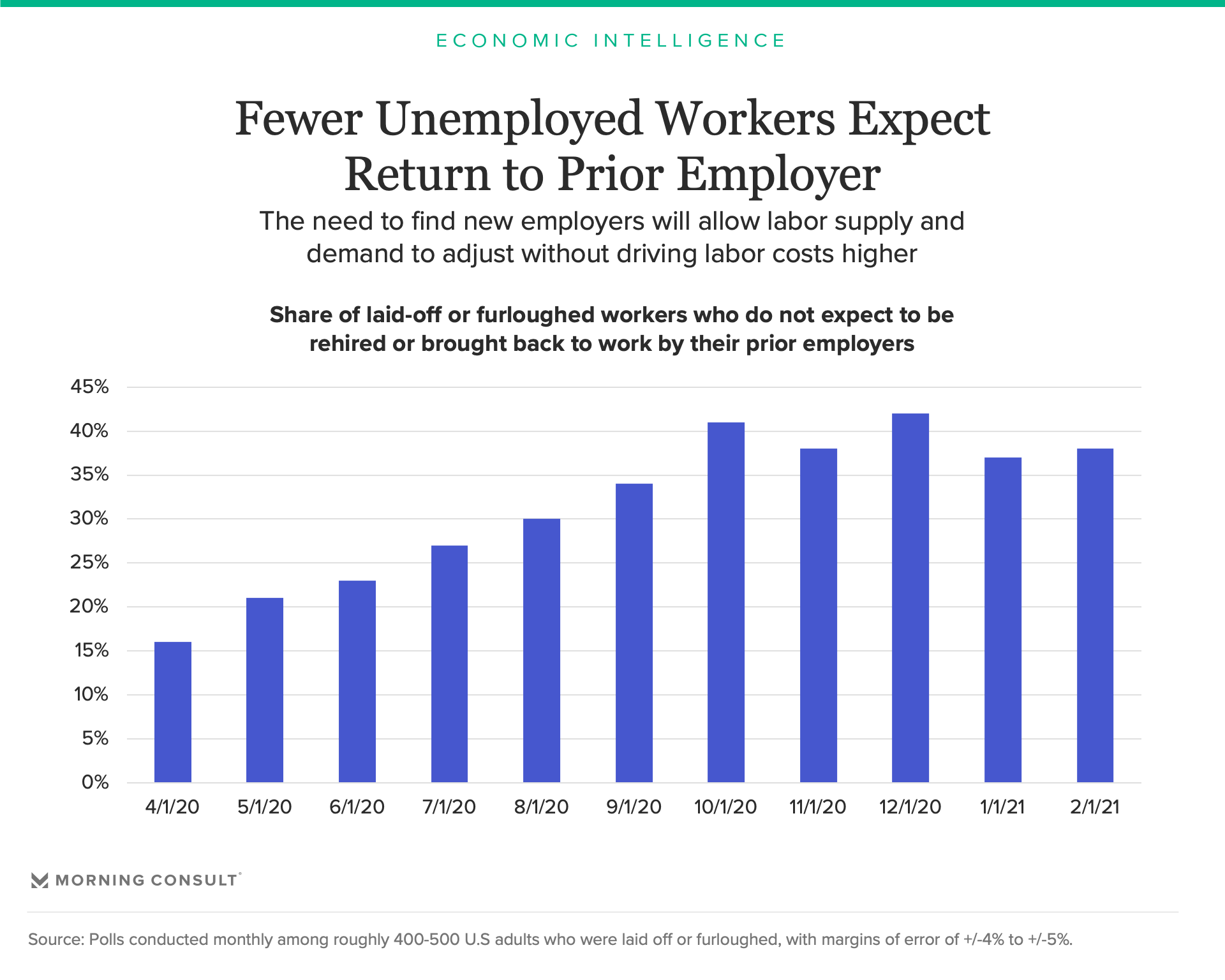 [1] In order for the Federal Reserve to raise interest rates, it needs to see evidence of persistent inflation. The Federal Reserve’s preferred measures of inflation (i.e., the price index for personal consumption expenditures, excluding highly volatile food and energy prices, and the trimmed mean price index for personal consumption expenditures) are both designed to remove short-term inflation volatility. Additionally, the Federal Reserve’s revised monetary policy framework focuses on average inflation targeting over a longer time horizon. (Return to the article.)