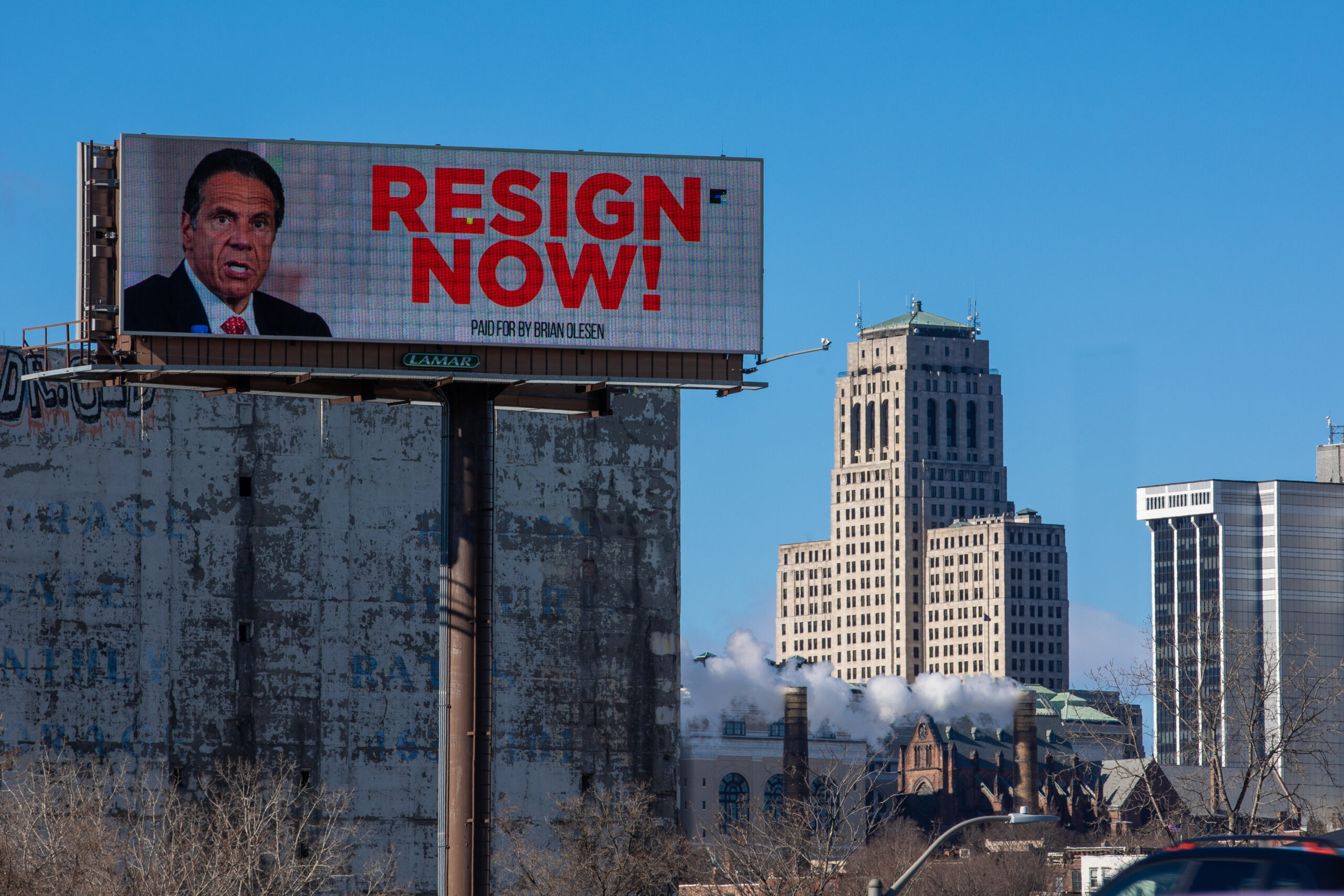 A message on a billboard near downtown Albany, N.Y., urges Gov. Andrew Cuomo to resign. The third-term Democrat saw his popularity sky during the COVID-19 pandemic, but recent scandals threaten to erase all of those gains. (Matthew Cavanaugh/Getty Images)
By Eli Yokley

The weight of two scandals is threatening to wipe away the popularity New York Gov. Andrew Cuomo has gained during the course of the coronavirus pandemic.

Since late January, when a scandal emerged involving his administration’s alleged underreporting of COVID-19 nursing home deaths, the share of New York voters who approve of Cuomo’s job performance has fallen 11 percentage points, to 52 percent, according to Morning Consult Political Intelligence tracking. Most of that movement preceded Feb. 24, when former Cuomo aide Lindsey Boylan’s allegation of sexual harassment prompted more women to speak out against the third-term governor. 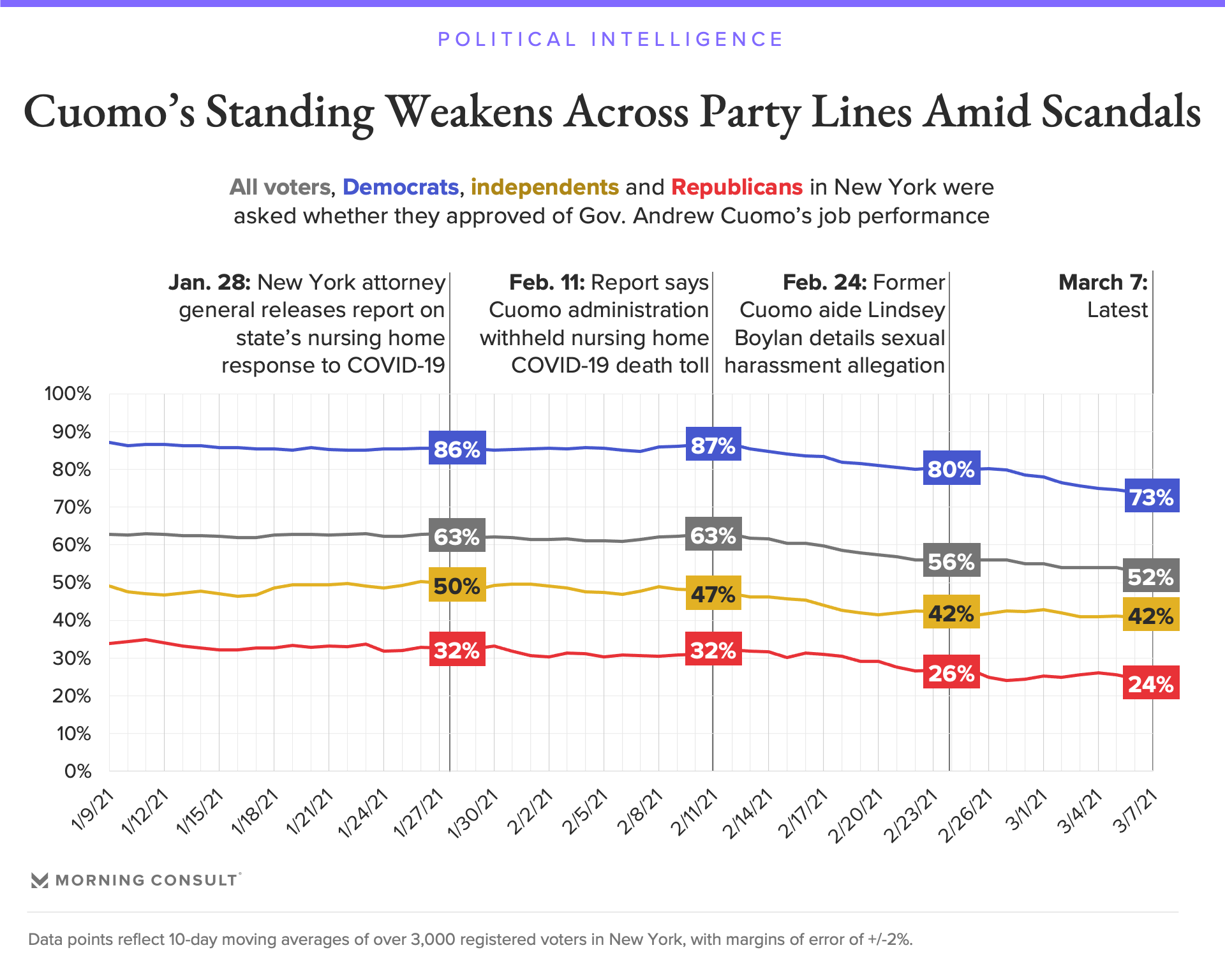 The issues of sexual misconduct and workplace harassment in the Cuomo administration, which prompted the state Legislature’s top two Democratic leaders to push for his resignation Sunday, has taken a particular toll on the governor’s standing with the Empire State’s Democratic base.

Nearly 3 in 4 Democrats (73 percent) still approve of Cuomo, who has bucked calls to resign and has not withdrawn from plans to seek a fourth term next year. But since surveys conducted before and after Boylan detailed her claims in a Medium post, Cuomo’s job approval rating has fallen 7 points among Democrats – matching its decline following a New York Post report that a top Cuomo aide told state lawmakers the administration had sought to hide nursing home deaths from federal prosecutors in the Trump administration.

While polling suggests that the accusations of sexual misconduct have hurt Cuomo with Democrats, they do not appear to have had as much of an effect on Republicans or self-described independents, who were more likely to respond to the New York Post report and related fallout than the more recent allegations.

Cuomo’s political pain appears sharp in context, but the polling shows that his sky-high job approval rating was an outlier for his third term – buoyed by his initial response to the COVID-19 pandemic. 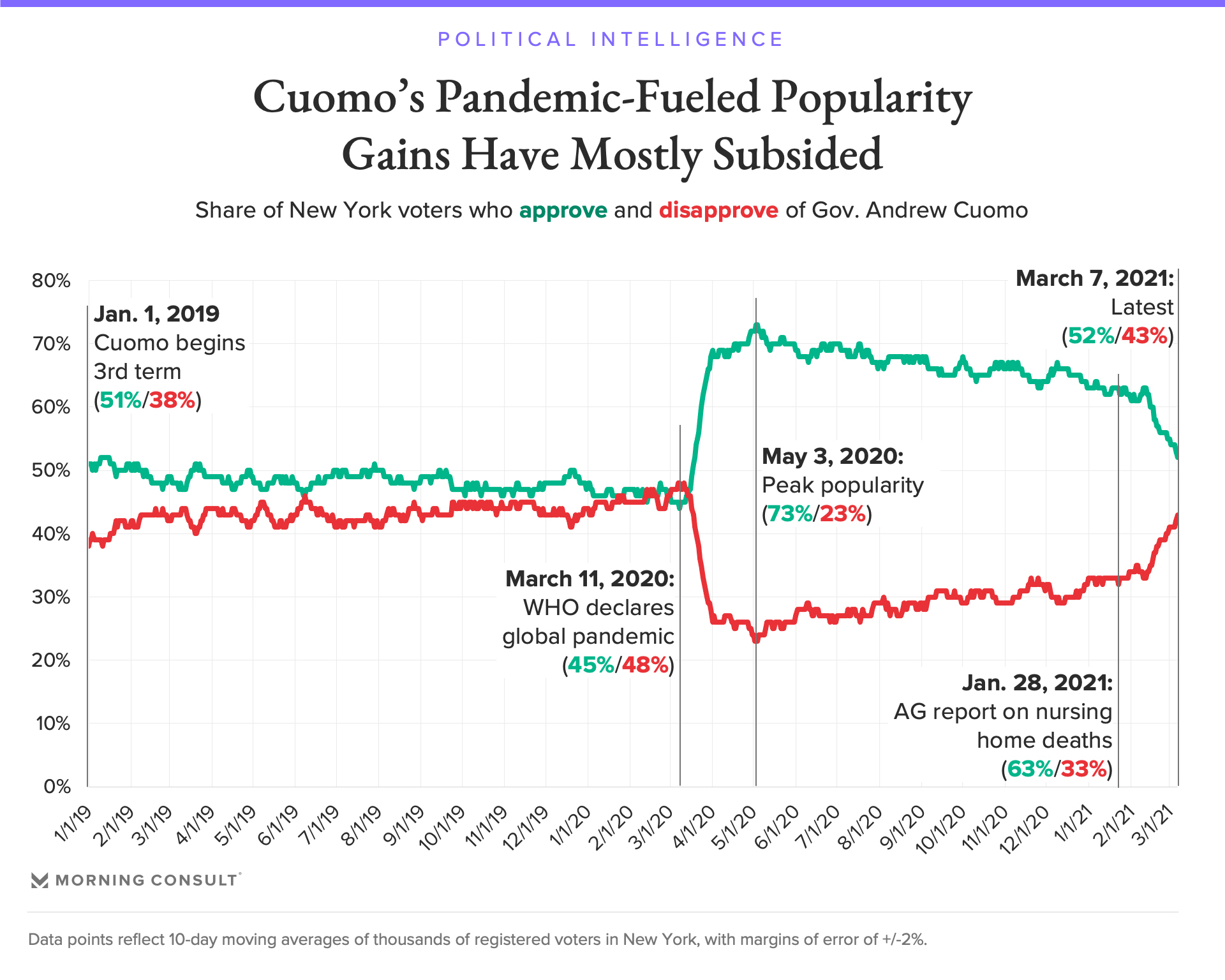 The latest surveys, conducted Feb. 26 through March 7 among 3,317 New York registered voters, found Cuomo’s job approval rating is higher than it was when the pandemic was declared nearly a year ago, and roughly in line with where it was when he began his third term in early 2019.