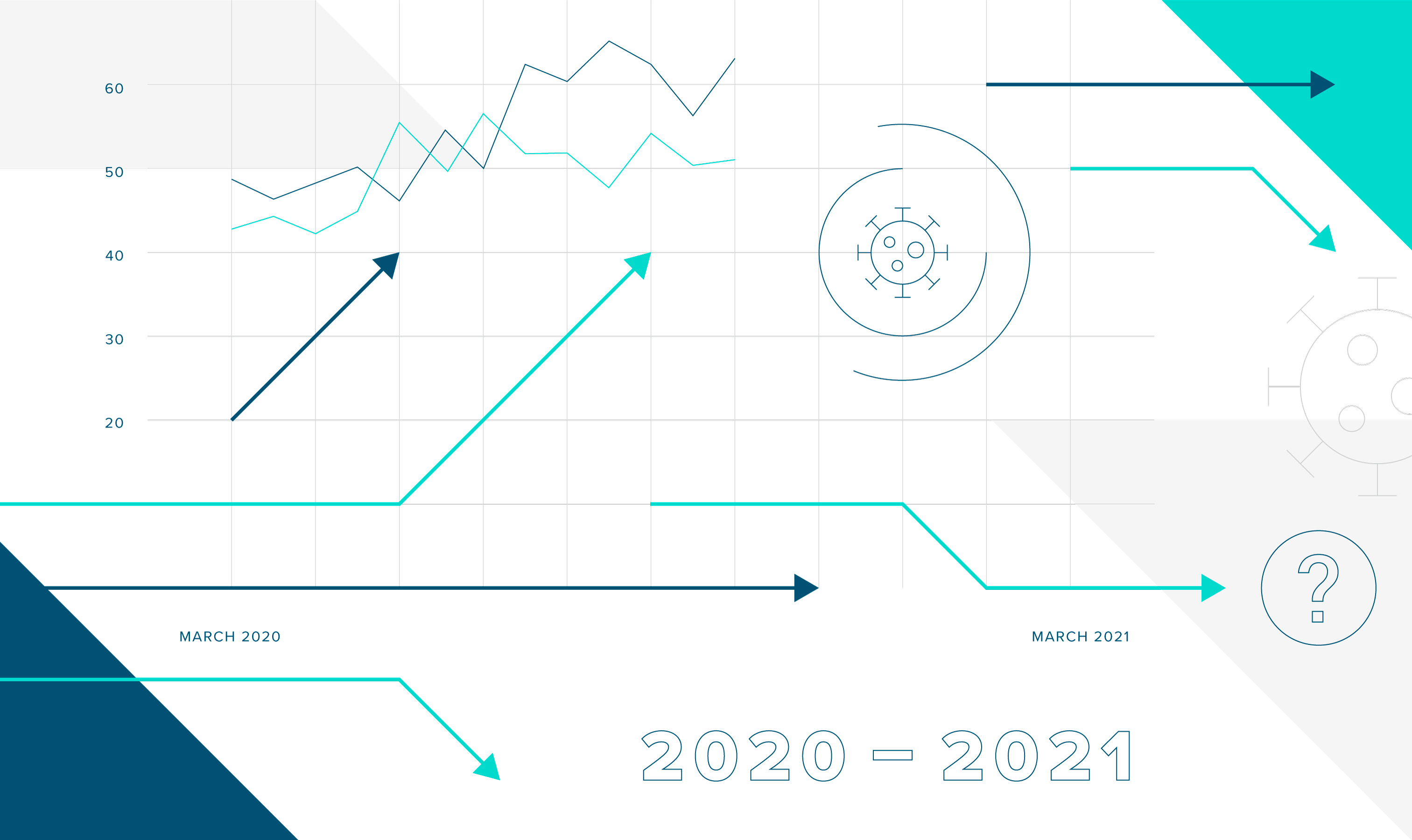 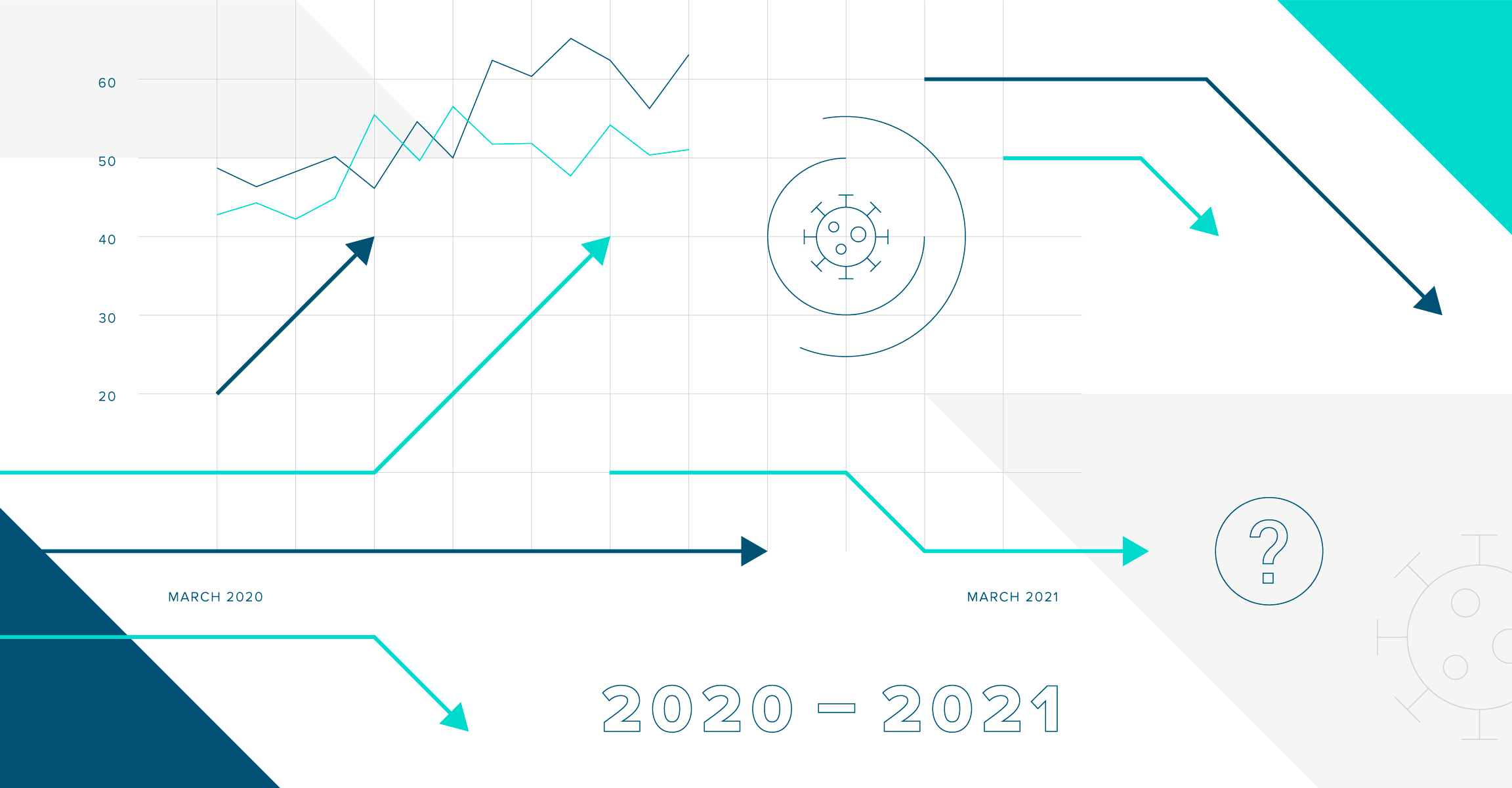 One Year Later: The Data That Illustrates How American Life Has Changed During the Pandemic

895,400 respondents in over 400 surveys capture the ways people have adjusted to living with the virus

Thursday marks one year since the World Health Organization declared COVID-19, a novel coronavirus, a global pandemic. In that period, the virus has drastically changed the American public’s consumer habits and remade entire industries.

Since the pandemic was declared, Morning Consult has fielded more than 400 surveys, gathering roughly 895,400 responses on topics related to business, finance and government. Our year in review, inspired by The New York Times, curates the data that has defined the ways the pandemic has altered Americans’ way of life and their views of their world.

Consumers’ comfort levels with returning to shopping malls stagnated through most of 2020, but as more Americans received vaccines in early 2021, comfort levels have been ticking up.

Staycations had their moment

By August, 26% of U.S. adults had taken a staycation during the pandemic, with 40% saying they plan to take one soon. 58% said they would plan one even after the virus is under control.

71% of dating app users said in February 2021 that they’re logging on more amid the pandemic. Stigma over using the apps has also declined: The public is more likely to say they feel positively about dating apps and services than negatively (38% vs. 32%).

41% of U.S. adults said in June that they are buying fewer premium goods.

Roughly 7 in 10 said in March 2020 they’d undergo inoculation, a figure that fell as low as 48% in October and rebounded slightly to 62% in February. Attitudes among Black adults are even more pronounced, dipping as low as 26% in October before rising to 60% in February.

37% of adults said in October that their daily lives have gotten worse during the pandemic, while 19% said their lives have gotten better and 38% reported no change. Urban adults are more likely than those in rural areas to report improvements to their relationships, finances and health during COVID-19.

Support for Medicare for All and the Affordable Care Act

68% of adults said in October they would likely see their primary care doctor during the pandemic, up from 65% in July and 39% in April.

By September 2020, telehealth services made up about 5% of private medical claims, up from 0.16 percent a year earlier, a 2,980% percent increase.

Movie theater foot traffic tanked last year, with most movie theaters closed across the country, and has yet to recover, due in part to consumer comfort, which has also failed to rebound.

About 1 in 3 self-identified casual sports fans said in December that they have been watching sports less often than before the pandemic. Of those, 17% cited politics and social justice demonstrations for the decline.

Comfort among sports fans in attending a sporting event

No more than one-quarter of sports fans said they feel safe going to a sporting event during weekly surveys conducted from July to mid-January. More recently, however, comfort levels have been rising.

Republican sentiment toward the NFL

In August, the NFL’s net favorability rating among Republicans dipped below 10 percentage points for the first time since 2018, but that figure has since been creeping back up.

38% of youth sports programs said in April 2020 that they can survive for three months at most. Roughly half of parents said they’re less likely to enroll their kids in sports in wake of the pandemic.

Joe Biden grew increasingly popular over the past year, with his favorability rating beginning to rise around the time he accepted his party’s nomination at the Democratic National Convention, and the upward swing continuing into his first months as president.

The share of Republican voters who trust the U.S. elections system fell by more than 30 points to 34% after President Donald Trump lost the 2020 election to Biden.

Net approval of the CDC’s handling of COVID-19

The Centers for Disease Control and Prevention enjoyed a net approval rating of 63 in March 2020 in Morning Consult’s first survey on COVID-related concerns but dropped to the mid-40s in late May, where it stands today.

The clean energy workforce was expected to grow by 5.3% this year, but it has instead shrunk by roughly 12%. Biden is expected to invest in the industry in the coming years, which experts say will help fuel a rebound in how many people it employs

Climate-concerned adults in an April survey were 24 points more likely to always wear a mask in public spaces than those unconcerned with climate change.

Concerns about COVID-19’s impact on the economy

Nearly 2 in 5 millennials in September said the coronavirus pandemic has had a major impact on their current financial situation.

7 in 10 Democrats in February strongly backed the enactment of a new stimulus package, including 60% of Republicans who supported it in general. Among all registered voters, 76% support a new economic stimulus package.

Pay and income losses among low-income adults during the pandemic will continue exerting downward pressure on labor costs and inflation throughout 2021.

Since March 2020, a range of apps have gained and then lost popularity among Americans.