One Year Into the Pandemic, The Latest on What Consumers Want Brands to Say and Do

Striking the right balance between advocating for important issues, staying open to support employees’ livelihood and communities’ wellbeing, and delivering for shareholders will remain a challenge, with real implications for positioning, advertising, and strategy decisions, writes Morning Consult’s Victoria Sakal. 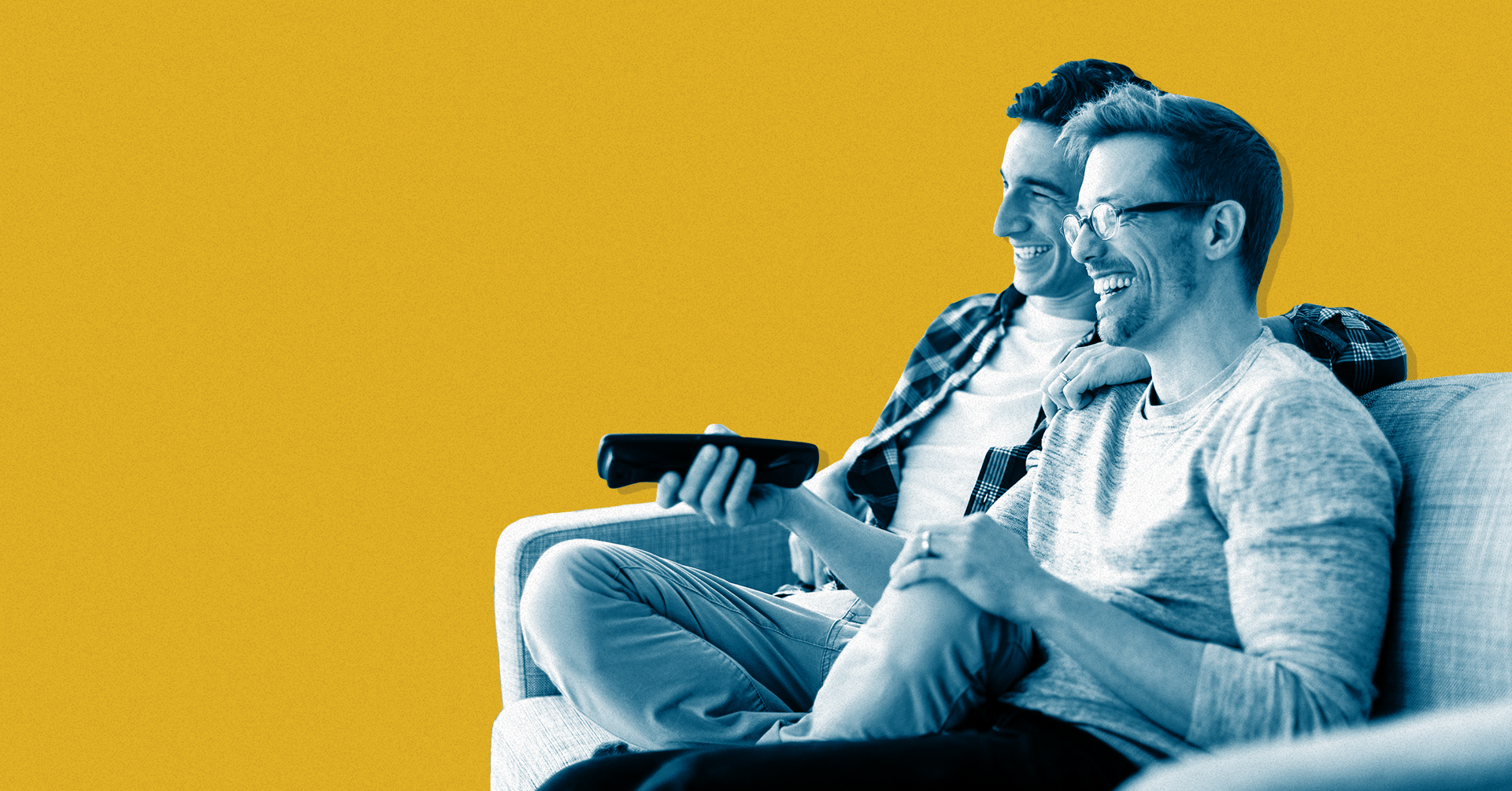 Americans have had an emotionally, physically and financially tumultuous year. Among the avalanche of changes the public has experienced in the last year, the COVID-19 pandemic has shifted consumers’ relationships with and expectations of corporate America in many ways — some of which are permanent, while others are already proving themselves temporary as they fade with memories of early 2020.

One year into the coronavirus’ widespread outbreak in the U.S. approaches, vast majorities of Americans report feeling as ready for change (81 percent) as they are concerned (71 percent). Similar shares feel happy (64 percent) and tired (62 percent). These complex emotions — not to mention enduring polarization around a range of issues, economic realities and even the future of the country — leave brands eager to move on from the turbulence of 2020 with unstable footing.

But even as pressure around brands standing up and speaking out on urgent issues ebbs and flows, one area lacking ambiguity is the changed role of brands in today’s society.

Consistent with early September, the predominance of Americans hold companies responsible for taking care of employees, communities, and the environment, positively contributing to society, operating responsibly and ethically, and contributing to solutions around diversity and inclusion. This holds across demographics and consumer groups, though younger, minority, higher income, more progressive audiences are significantly more likely to consider fighting racism and discrimination as well as a number of other, more specific systemic issues a company’s responsibility as well.

To be sure, significantly fewer Americans feel corporations are responsible for tackling racism or discrimination (down 15 points) or equal employment (down 7 points) compared to last September, likely given outrage over the wave of racial injustice activism in summer 2020 has now dimmed.

And, while the public is no more likely to expect companies to take a position on or activate around social issues even if not directly related to their business than before, a growing share believes it is a company’s responsibility to focus on financial performance, even if at the expense of other objectives (up 8 points since September).

Revealing an emerging and critical tension that will almost certainly endure post-pandemic, this audience is more likely to be younger, live in urban areas, identify as Black, be unemployed or earn higher incomes — and to be attentive to the political matters of companies they buy from or to feel companies should play an active role in activating around political, societal and/or cultural issues.

Though the critical issues of the moment may shift, the newfound relevance — and importance — of purpose in brand-building is clear.

Today, six in ten U.S. adults prefer that companies act responsibly and ethically but are ultimately willing to overlook issues if the company offered something they liked at the right price. However, the share paying attention to ethical and political matters related to companies they buy from has meaningfully increased since August 2020, when 53 percent indicated this, to 60 percent today.

And, though the share of Americans who have boycotted a company for political reasons over the last year (one quarter) has remained steady since last August, the share who have spent in support of a company because of a political stance the company took has risen 5 points, reaching 23 percent today.

In other words, for most consumers, brand actions are either not consequential enough to drive bold actions, or are potentially lost in the sea of late-breaking headlines and complex events. Companies should still be mindful of the fair share voting with their wallet, who tend to be younger and more culturally and politically progressive, while also bearing in mind that their actions are also impacting increasingly attentive and discerning consumers’ attitudes toward and relationships with brands in other ways. 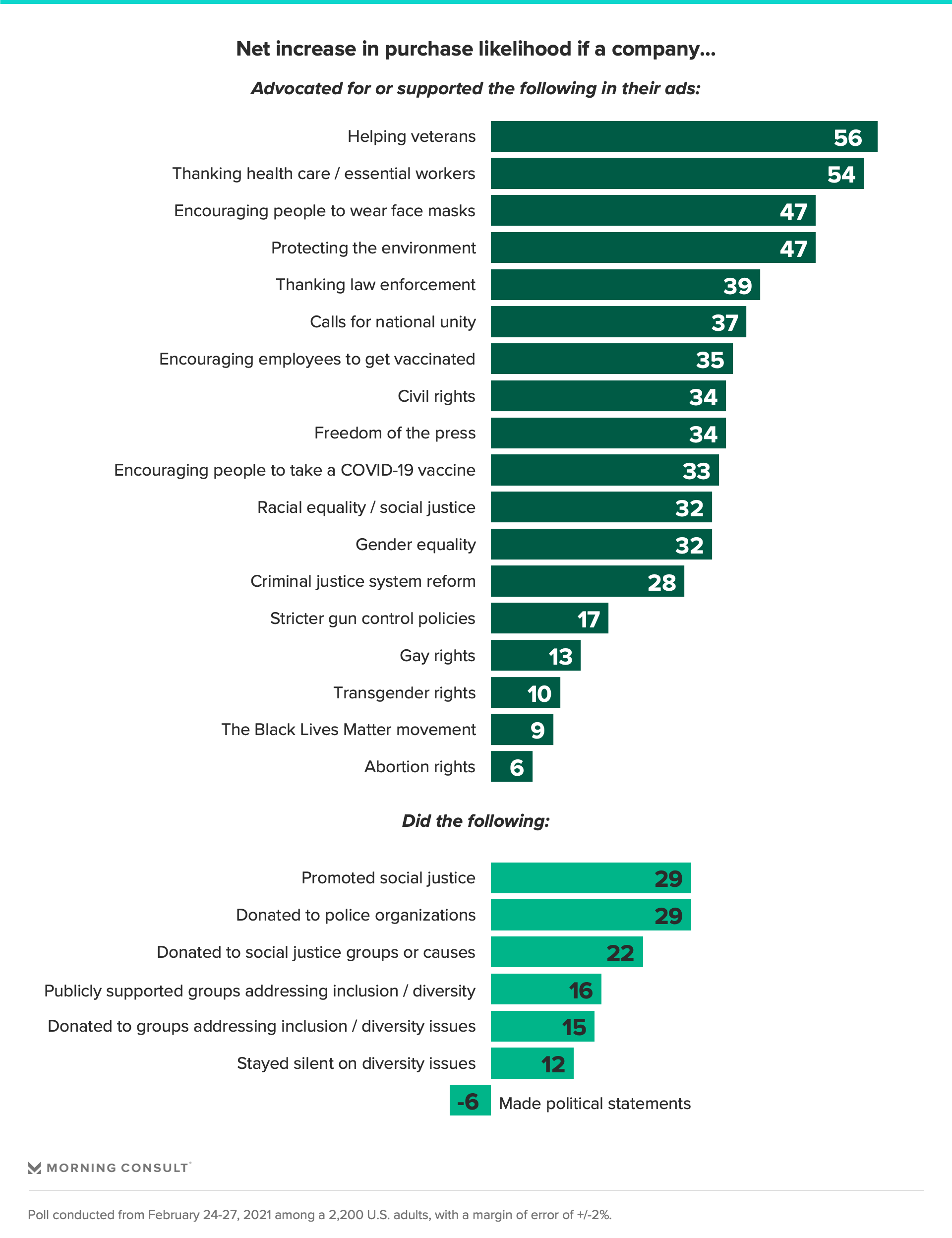 Consumers trust companies more amid the pandemic, but offer conflicting views on how entangled they should get with issues dominating the headlines.

Driven in large part by successful corporate responses to the many crises of the past year, trust in corporate brands to do the right thing has continually risen since August 2020, when 33 percent indicated that they trusted these entities, to 47 percent now saying so. Net trust has declined from -24 to -6 points over the same time frame.

And while six in ten believe companies should stick to what they do and not get involved in social, political or cultural matters, the share believing companies should act to drive change on important social issues has held strong at 60 percent since September 2020. Since last August, the percent of Americans believing corporations should act to influence public policy and to address impacts of climate change have increased by 48 percent (to 49 percent today) and 28 percent (to 69 percent today), respectively. 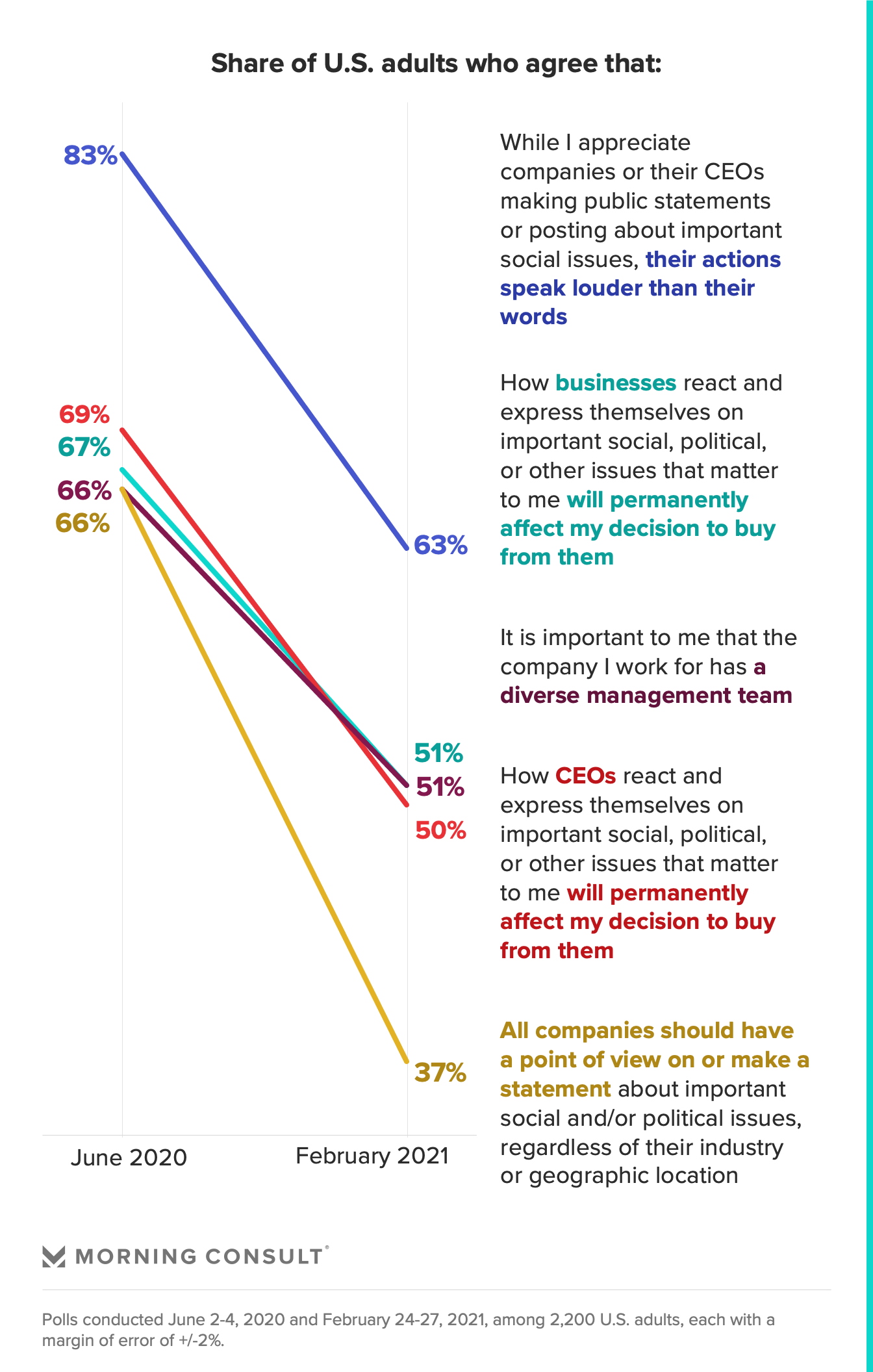 Specifically, ad messaging around notably less polarizing issues and stakeholders– veterans, essential workers, the environment, and COVID compliance — would increase purchase likelihood for a sizable share of Americans. Brand activism around social justice, however, is likely to yield smaller boosts.

Sentiments around corporate and CEO activism have weakened over the course of the year. This reveals both the intensity of early reactions around timely issues, and which corporate actions have remained relatively important to American consumers over time. Namely, actions speak louder than words, with 63 percent of U.S. adults agreeing with this even today.

Related to this desire to see more action than talk from brands around important societal issues, the brand messaging Americans are receptive to has also shifted tellingly since last March.

As vaccine roll-out continues, Americans are much more open to people interacting in ads today compared to early days of the pandemic and even last December. But, despite warming to these themes, adults are still net negative about seeing them in advertising, so brands would be wise to ease back into visuals of normal interactions. 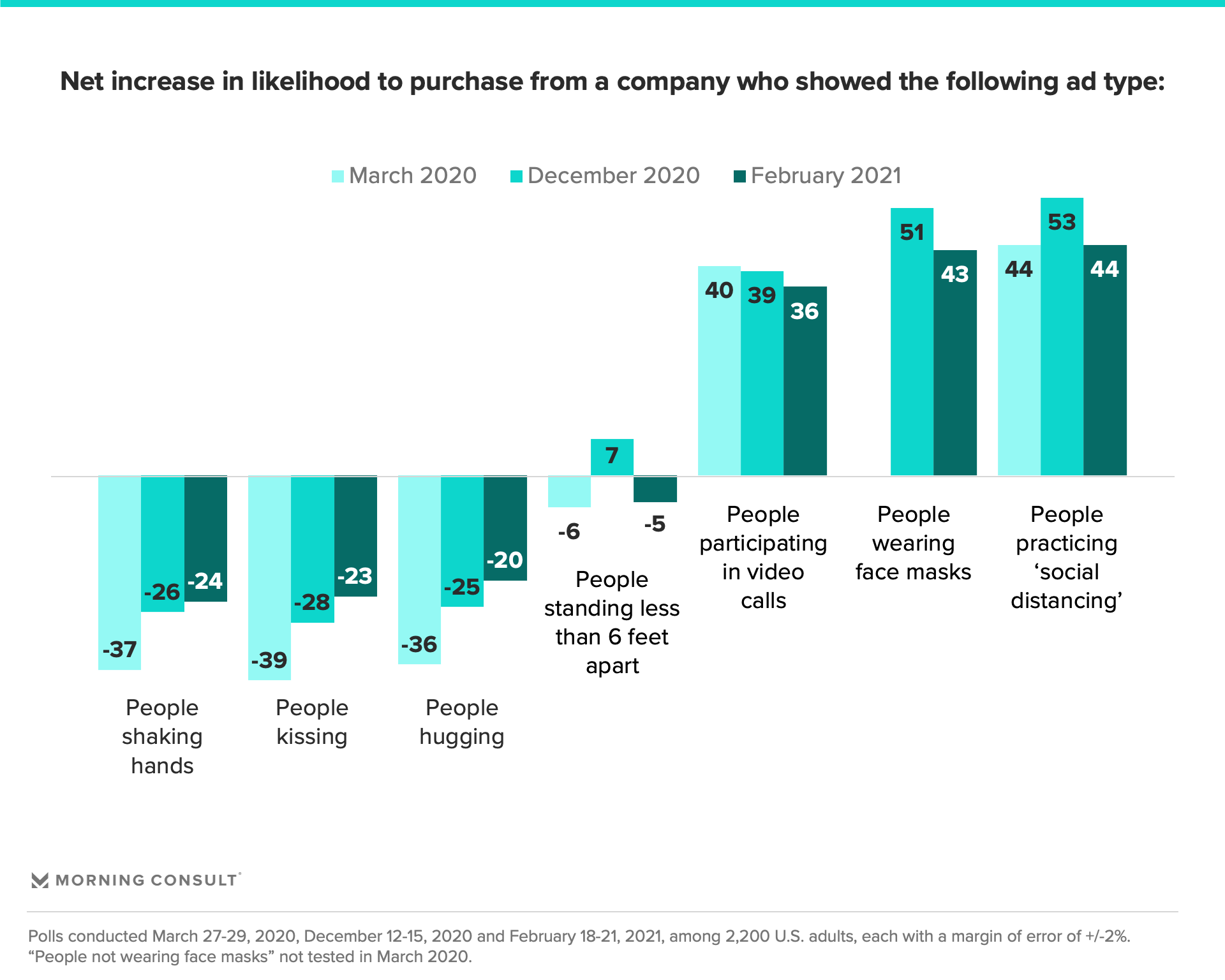 Funny, entertaining, and optimistic ads are significantly more welcome today than in the early days of the pandemic and even last December, suggesting that some combination of a new year, new vaccines, and likely enduring drain from the last year’s events have inspired an interest in levity. 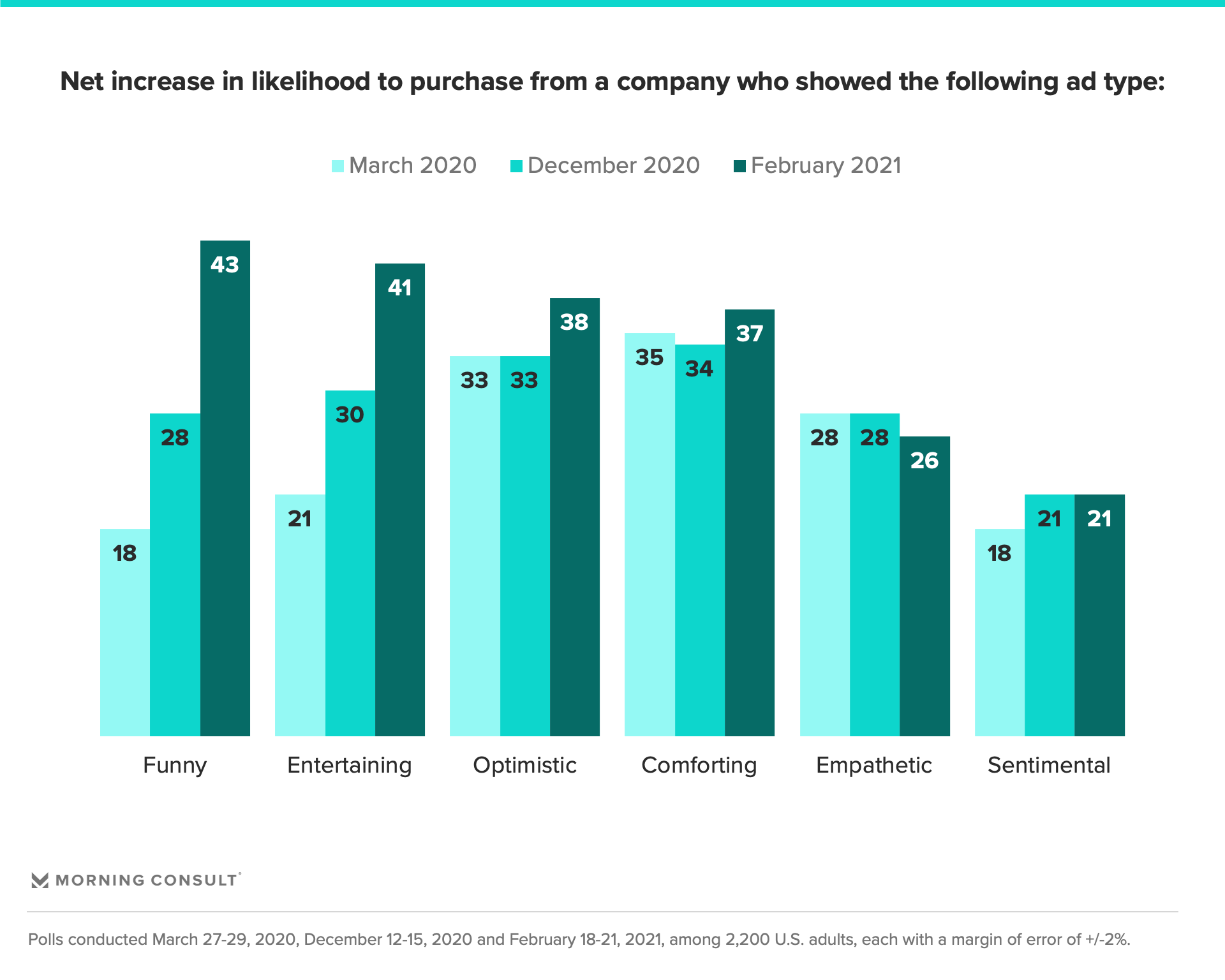 Yet, consistent with the rise in values and ethical leadership discussed above, while product- or service-oriented ads have seen the largest bump in likelihood to drive purchase since March 2020, ads about company values are also more likely to do so, up 42 percent since last year. 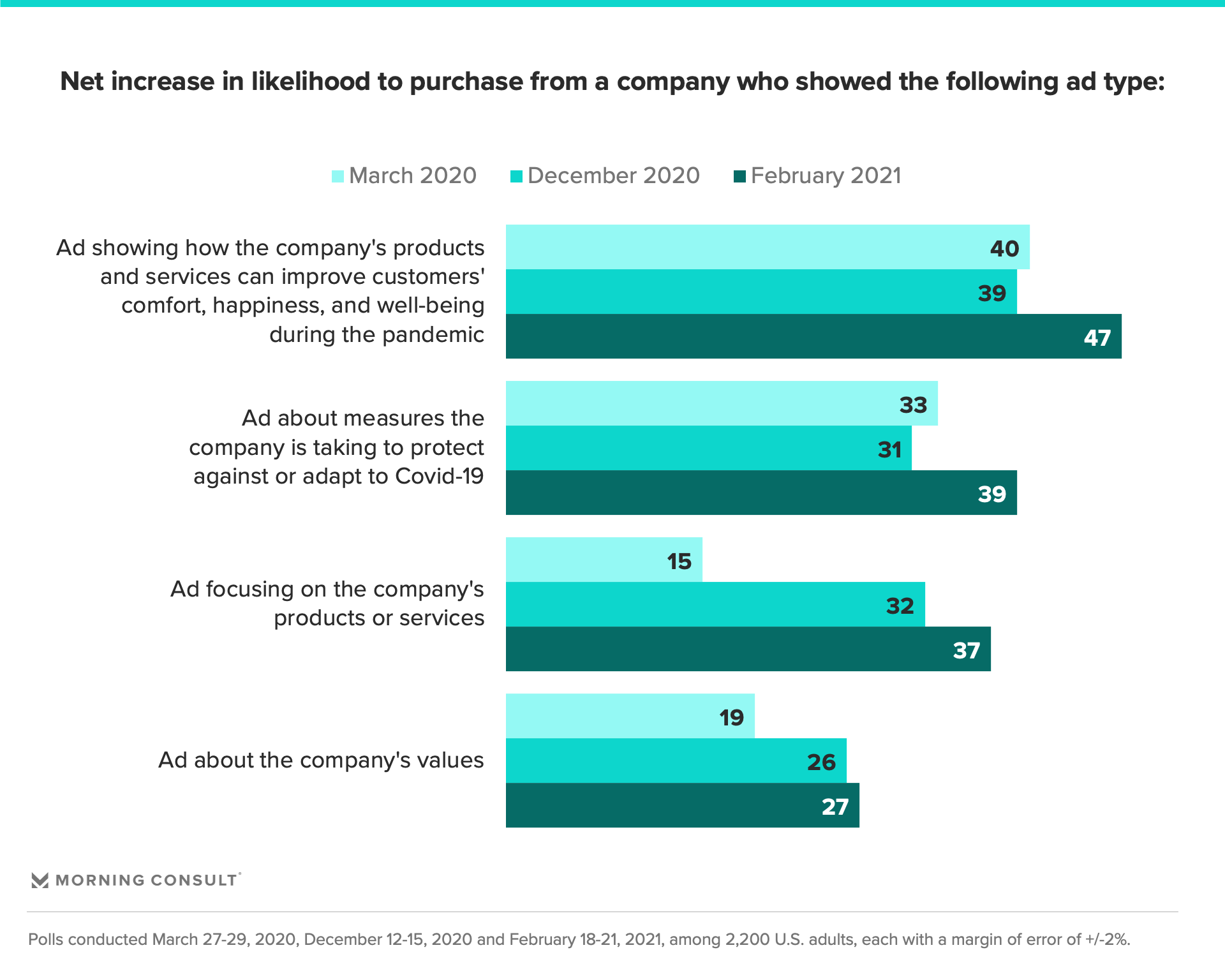 In the year since the novel coronavirus first sent America into lockdown, consumers’ relationship with companies has been a bit of a rollercoaster: Sentimental and empathic messaging tested well in the early days, then abruptly stopped; then came clear calls for corporate and executive action, followed by a desperate need for laughs and levity.

Now, as vaccine efforts in the United States ramp up to the tune of 2 million per day, consumers’ needs and wants are going to be just as unpredictable and erratic. Brands that can successfully keep pace with their evolved role in society have a unique opportunity to demonstrate relevance to the post-pandemic consumer and capture value in a whole new and unprecedented way.