Economics, politics and the virus drove consumer confidence over the year, but their impact varied over time and across demographics, Morning Consult economist John Leer writes 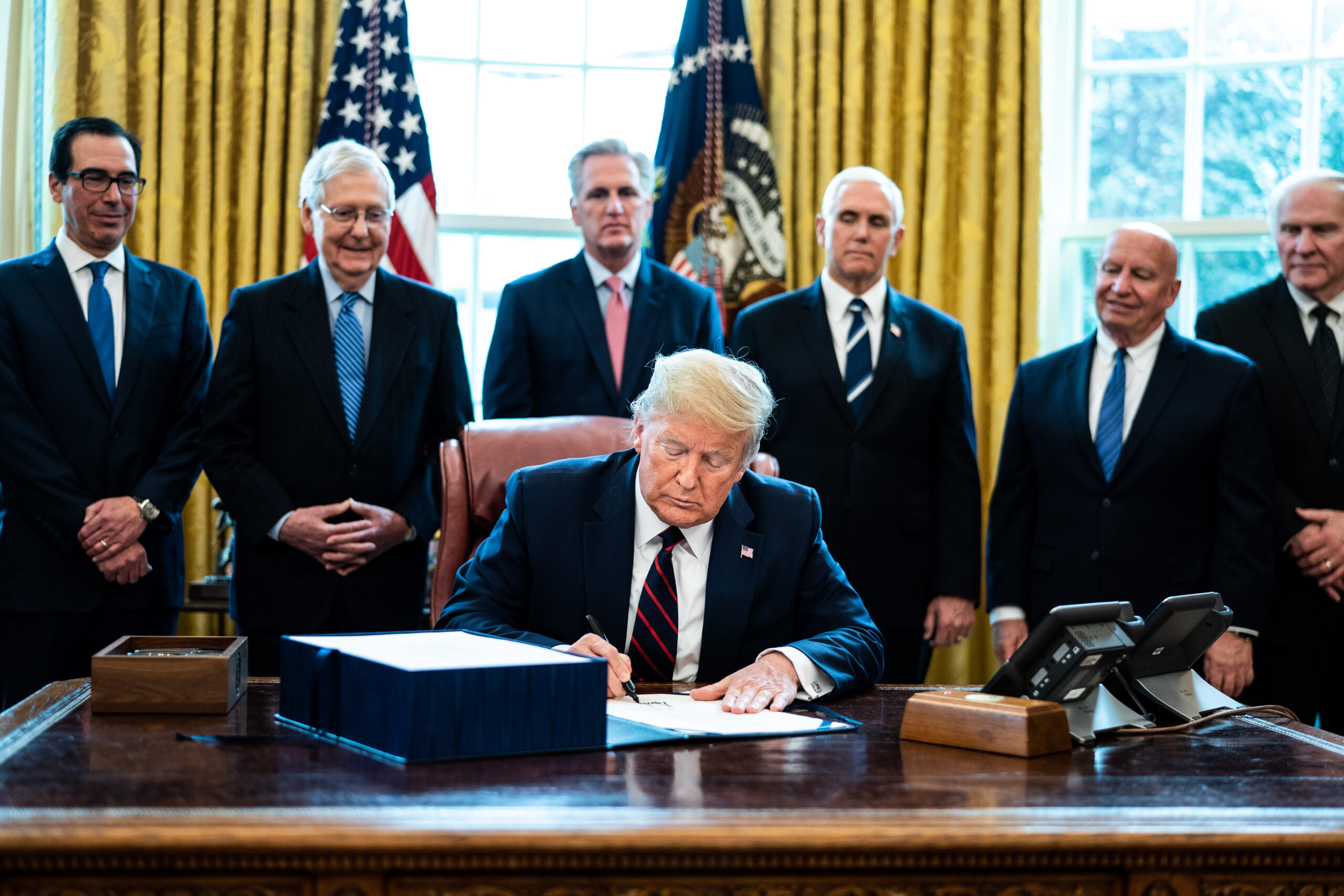 Then-President Donald Trump signing the CARES Act on March 27, 2020, in Washington. The CARES act helped slow a drop in consumer confidence and lay the groundwork for a summer recovery, according to Morning Consult economist John Leer. (Erin Schaff-Pool/Getty Images)
By John Leer

Consumer confidence in the United States has been on a roller coaster over the past year of the pandemic, driven by a combination of factors related to economics, politics and the virus. The importance of these factors varied over the past 12 months, falling into five distinct phases:

This analysis measures these events’ disparate impact across key demographics, including generation, income, education and political party, identifying which consumers are faring better than others in the year since the World Health Organization declared the coronavirus outbreak a global pandemic. 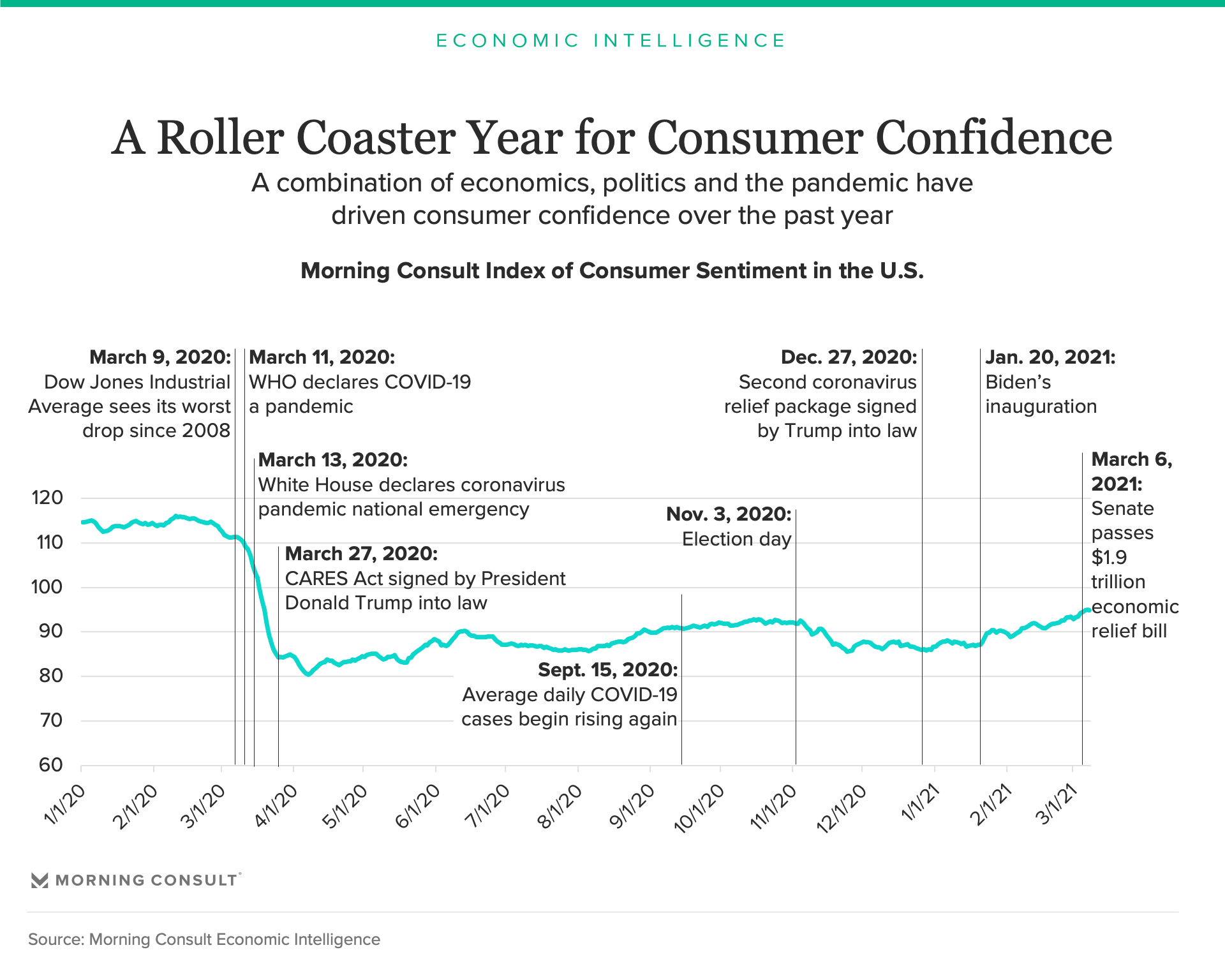 Consumers initially considered the pandemic a problem for the U.S. macroeconomy as a whole, but not for their own personal finances. However, by March 10, consumers updated their assessment, acknowledging that the pandemic would likely harm their future finances.

As seen in the graph below, consumer confidence among all generations fell dramatically in early March before the WHO or White House formally acknowledged the economic and health risks facing the country. However, what Americans acknowledged relatively quickly is that the pandemic posed a greater economic and health risk to Baby Boomers than it did to GenZers or Millennials. Not only were Baby Boomers more physically vulnerable to the virus, they also had less time to make up the financial losses incurred during the pandemic. Twelve months into the pandemic, the generational divide in consumer confidence has grown even larger. 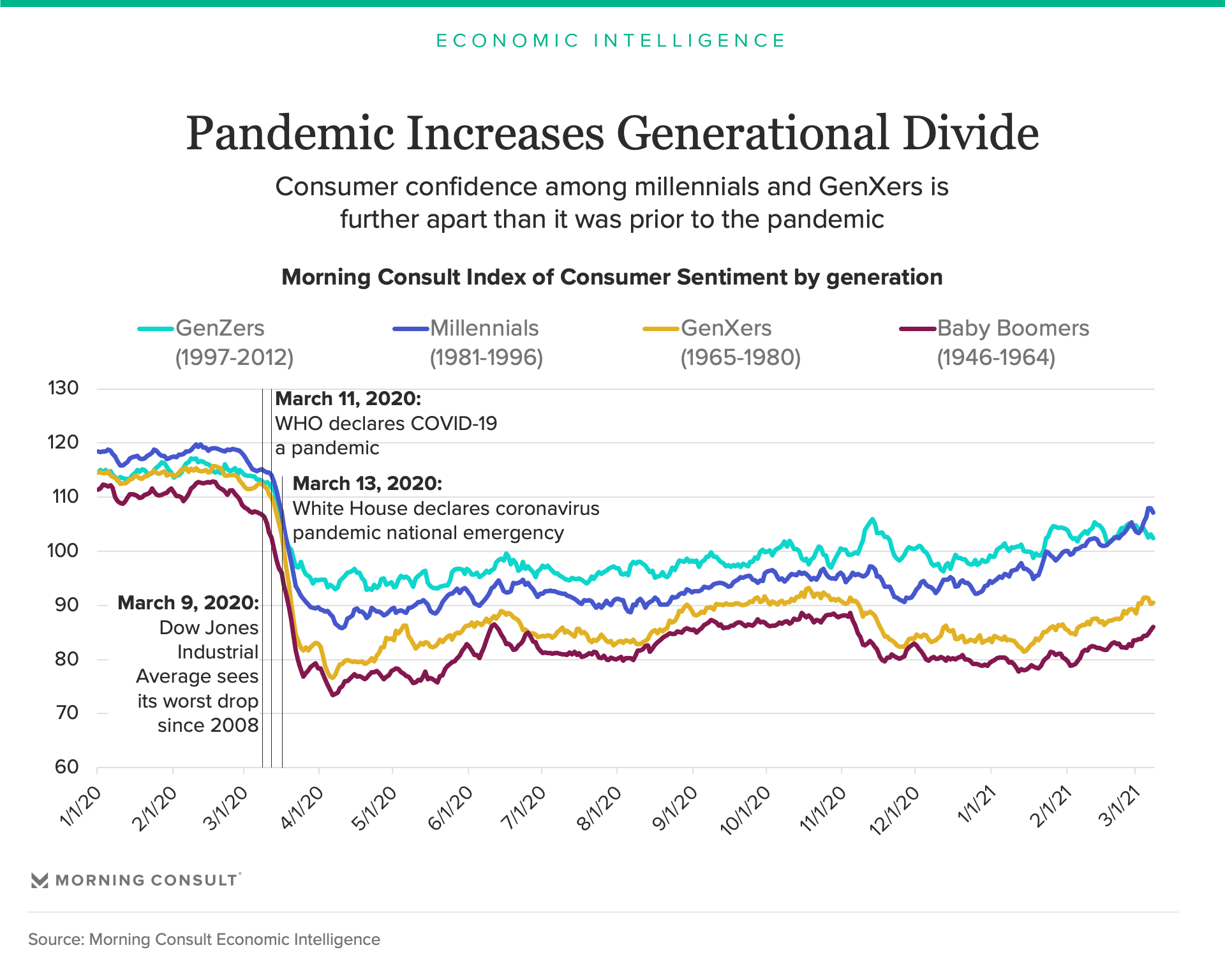 Passage and the signing of the CARES Act on Mar. 27, 2020, limited additional decreases in consumer confidence and set the foundation for the economic recovery over the summer. However, the federal government struggled to disburse stimulus checks in a timely manner, particularly to low-income Americans, and shortcomings in states’ unemployment systems delayed federal unemployment insurance payments. Only once financial support began hitting consumers’ bank accounts did consumer confidence begin to consistently increase.

Additionally, low-income Americans continued to suffer pay and income losses at higher rates than the rest of Americans. As shown in the chart below, confidence among low-income consumers has been the slowest to rebound. 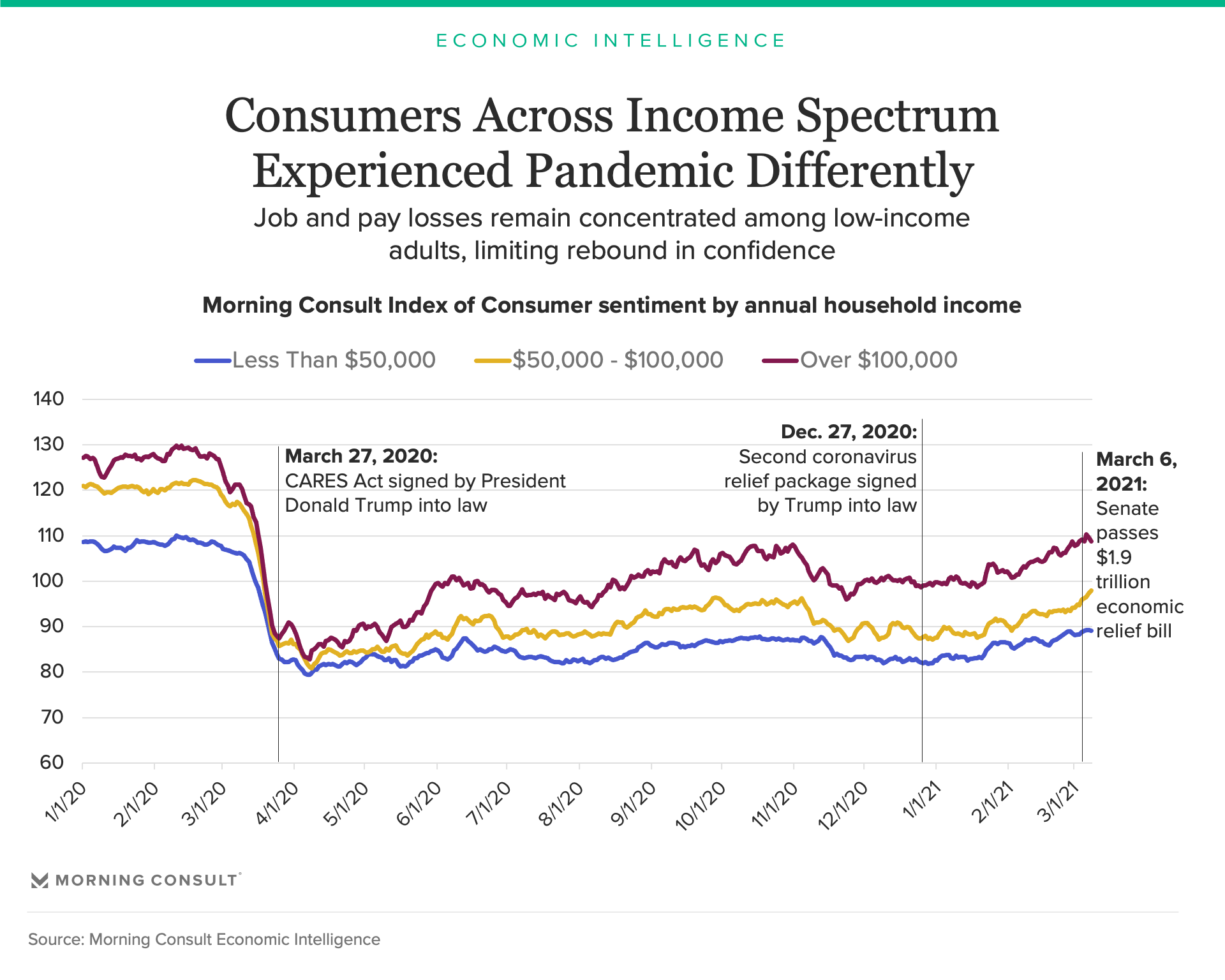 By the end of the summer, the economy was facing the perfect storm: Direct financial assistance to consumers via stimulus checks and federal unemployment benefits was winding down, and new cases began increasing.

Political pressure to reopen the economy also mounted during this time, with the idea that the benefits from increased economic activity would outweigh costs in terms of lost lives and sicknesses. However, based on the strong negative correlation between daily consumer confidence and the spread of the virus, I concluded at the time that “[r]eopening the economy in an environment of depressed consumer confidence is unlikely to generate adequate economic activity to justify the health risks.”

Unfortunately, as average new cases began increasing again in mid-September, the recovery in confidence lost momentum. In short, rather than balancing the need to support the economy while controlling the virus, the United States sacrificed both.

As most Americans lost confidence in the economy, higher-educated Americans began to distance themselves from the rest, underscoring the K-shaped nature of the recovery. Not only were they more likely to maintain their jobs, they also remained more secure in the jobs they had, as evidenced by the growing educational gap in confidence over the summer. 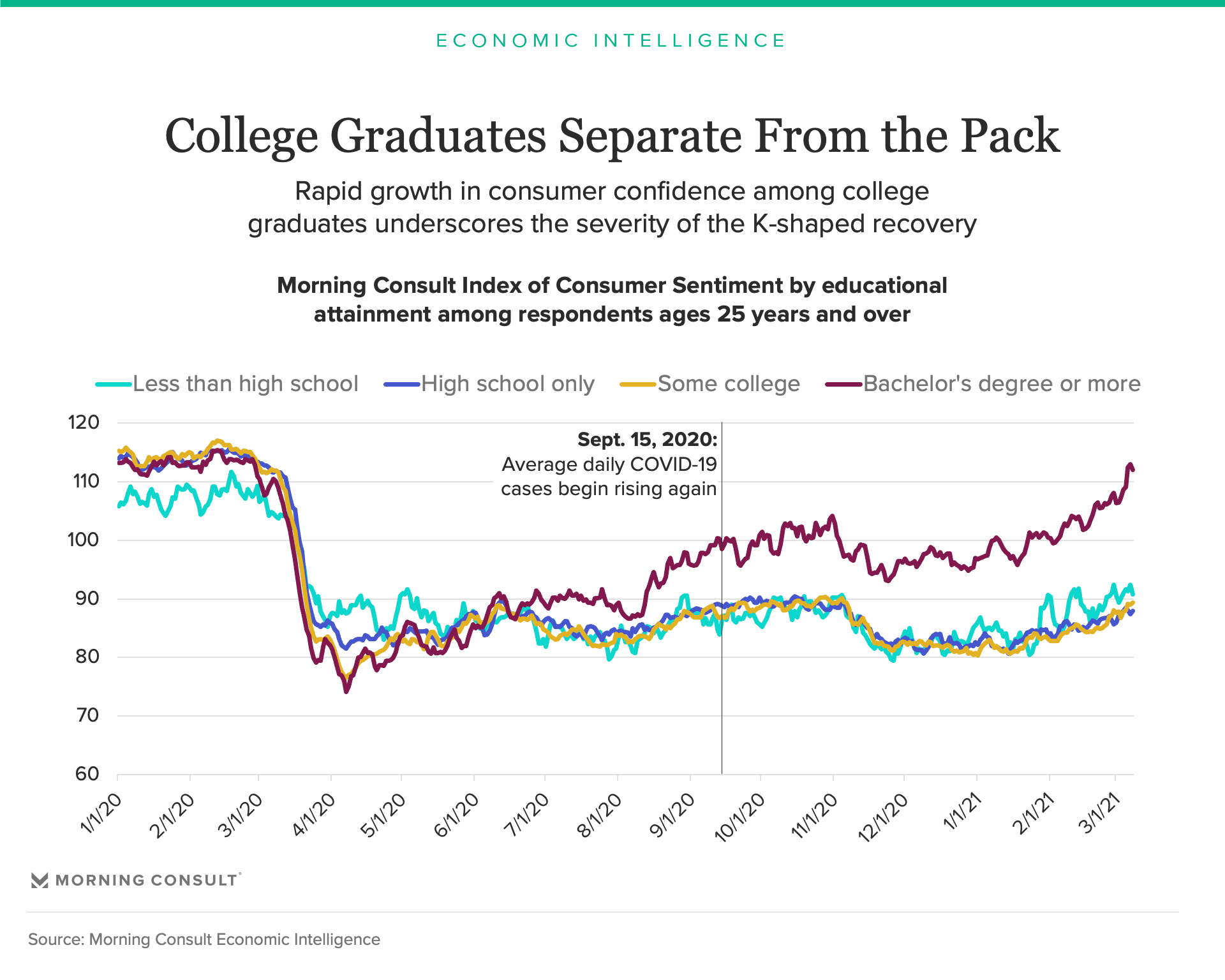 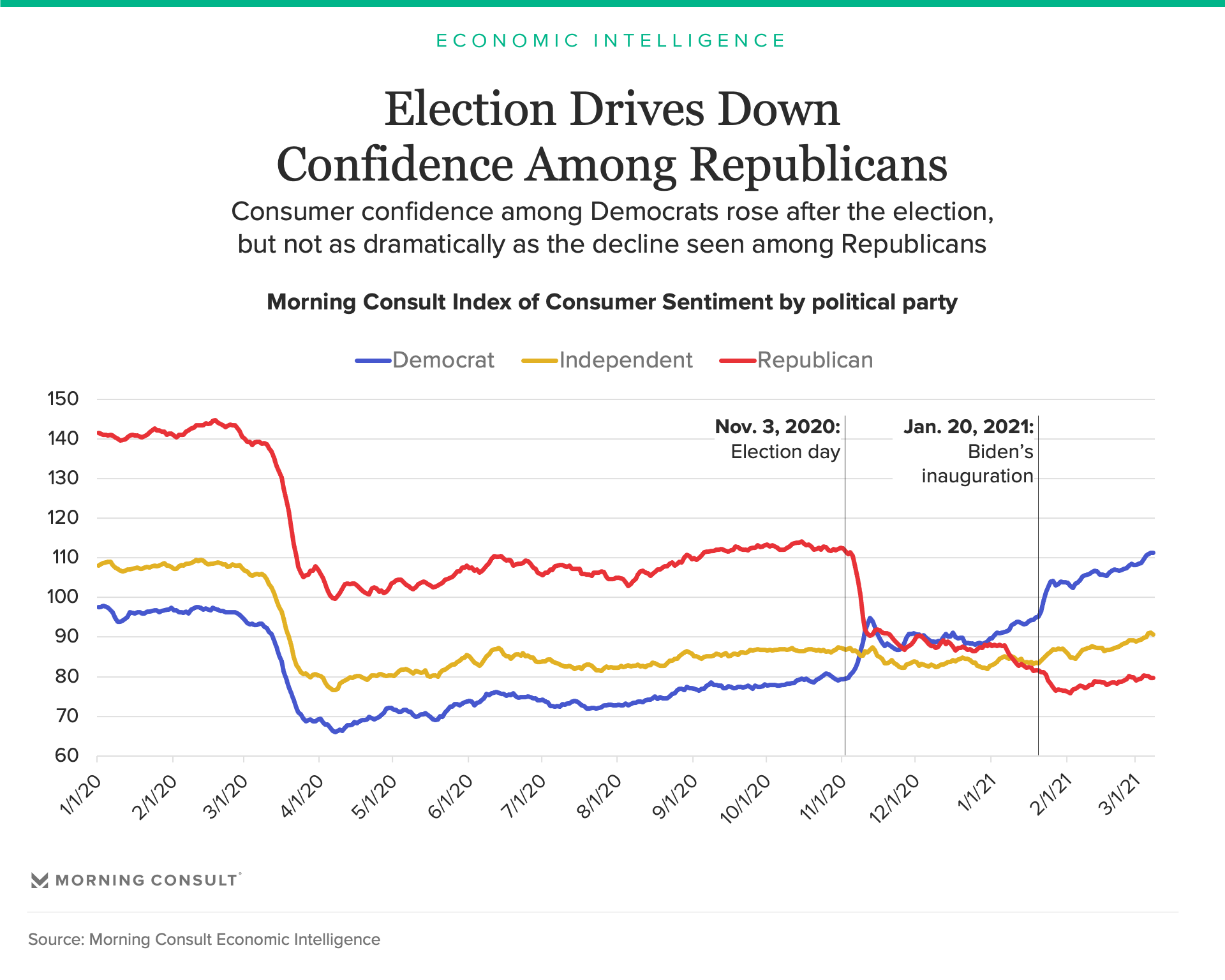 Daily consumer confidence exhibited elevated volatility following the election due to the mixed messages in the fight against the virus. While new daily cases were rapidly increasing, Pfizer and BioNTech announced that their vaccine was found to be more than 90 percent effective in preventing COVID-19. Given the significant logistical obstacles to producing and distributing the vaccine, consumers were hesitant to dramatically alter their economic assessments as the pandemic continued spreading at an accelerating rate.

The trajectory of the recovery in consumer confidence is likely to continue to be a function of the economic, political and public health developments. More financial support appears to be on the way, with the House of Representatives preparing to vote on the $1.9 trillion relief bill approved by the Senate last weekend. The accelerating rate of vaccinations should also support continued increases in optimism among consumers.

Despite these improving conditions, U.S. consumers are likely to continue facing economic headwinds. In April of last year, I wrote “The timing of the rebound in confidence depends on the extent to which the ongoing economic shutdown spills over into other areas of the economy, including labor markets and credit conditions.” That assessment remains true with eleven months of hindsight. Employment conditions are likely to remain weak for the foreseeable future, particularly for low-income Americans, and deferred liabilities such as mortgage forbearances and unpaid taxes on unemployment insurance jeopardize Americans’ repayment capacity.