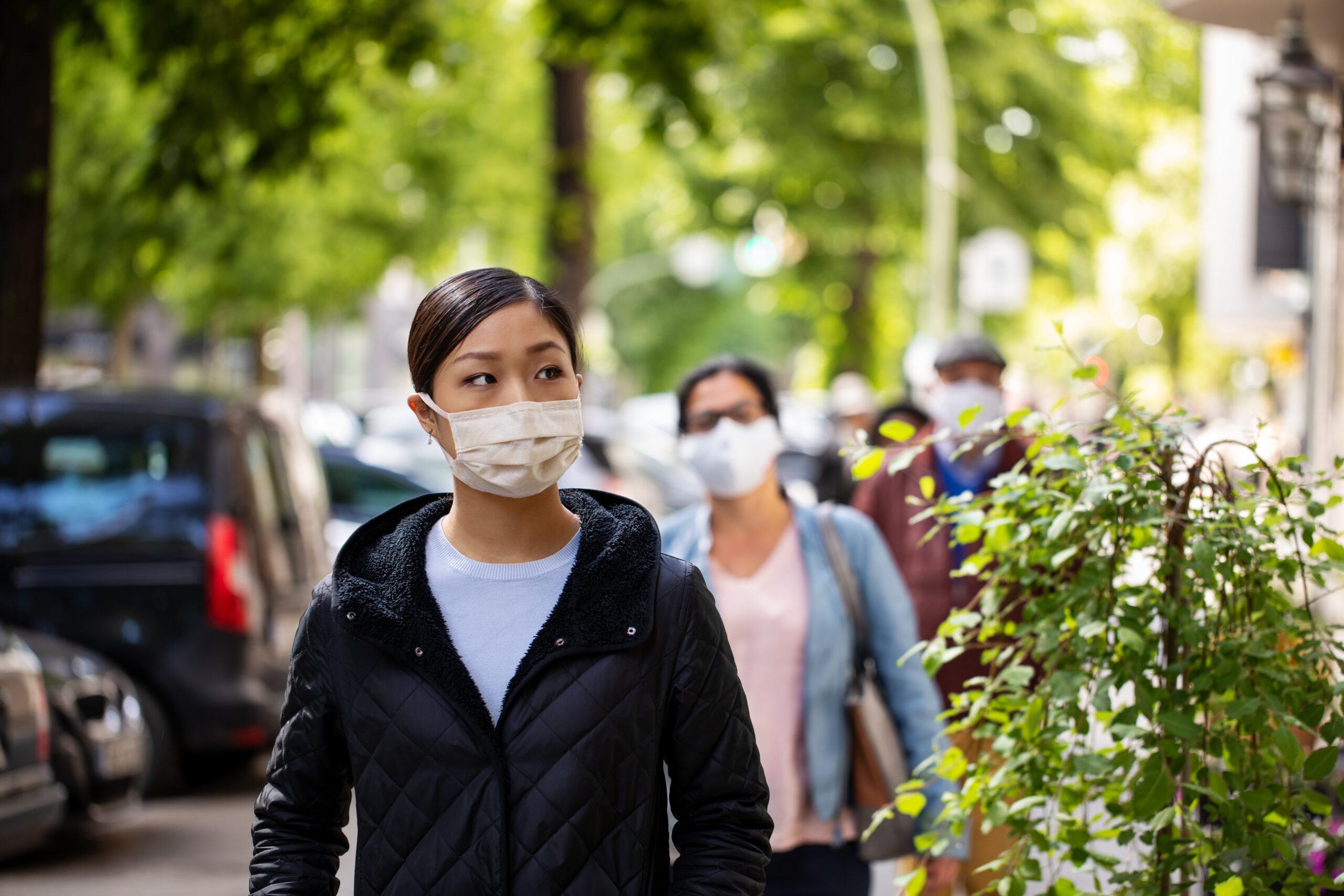 A new Morning Consult/Politico poll found that 57 percent of registered voters said they would continue to fully follow COVID-19 health precautions even if there were no statewide requirements where they lived. (Getty Images)
By Gaby Galvin

Even as parts of the country move away from COVID-19-related restrictions, over half of voters plan to keep up with public health protocols, new Morning Consult/Politico polling shows.

Beginning Wednesday, Texans will no longer be required to wear masks after Gov. Greg Abbott lifted the statewide mandate and other restrictions, saying last week that it is “now time to open Texas 100%.” Mississippi Gov. Tate Reeves also lifted his state’s mask requirement, prompting President Joe Biden to blast the Republican governors’ decisions as “Neanderthal thinking” that could compromise the nation’s pandemic response.

Many voters seem to have gotten the message: 57 percent said they would continue to fully adhere to measures like mask-wearing and social distancing, even if their local requirements were eased. Another 25 percent said they’d somewhat keep up with the precautions, according to the survey, which was conducted March 6-8 among 1,990 voters and has a margin of error of 2 percentage points. 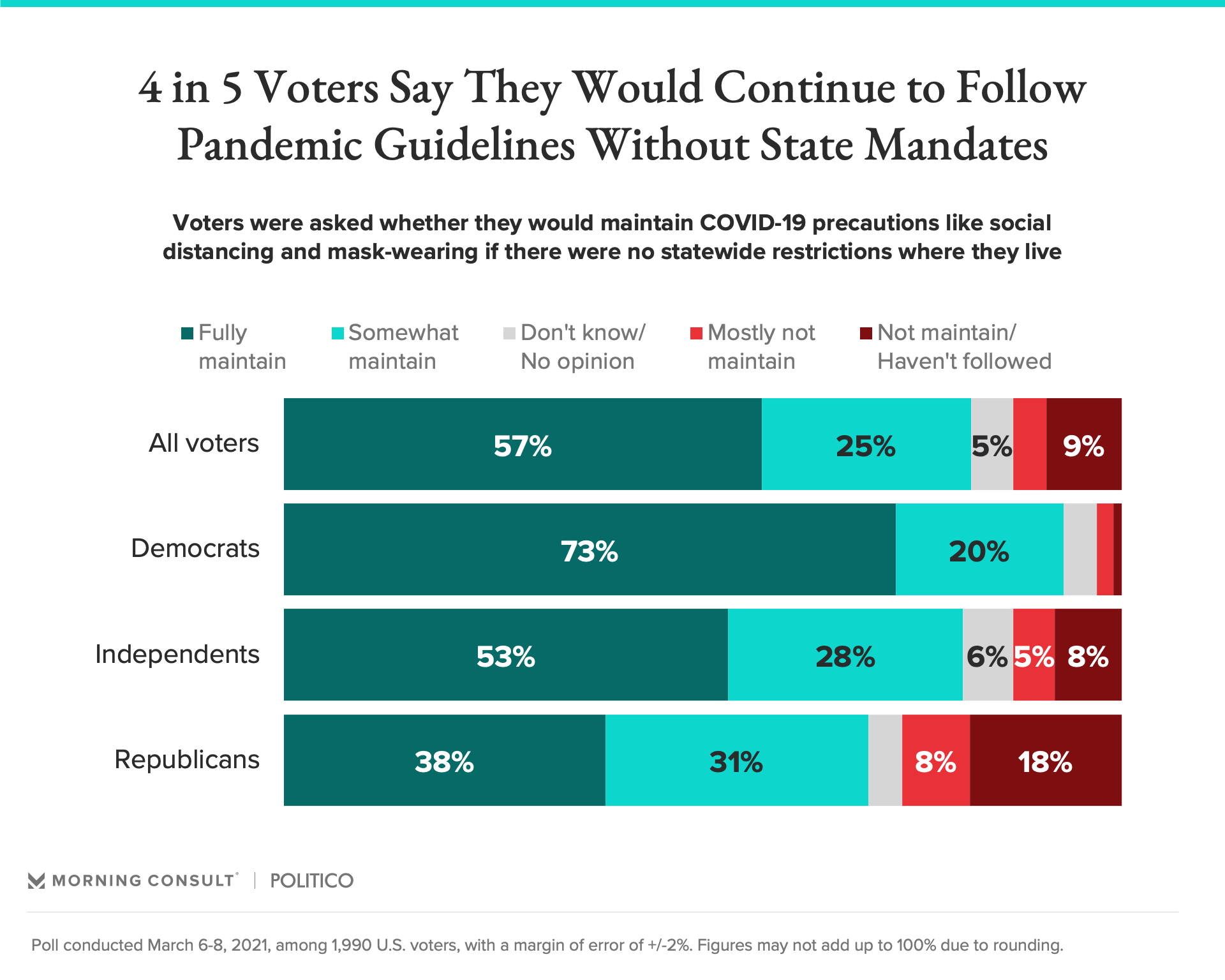 The findings offer a sense of how voters respond to Republican officials’ argument that mandates are unnecessary to entice people to follow health protocols. Reeves, for example, said over the weekend that he trusted Mississippians to “make good decisions” and continue masking up even without a state requirement. And on Tuesday, Maryland Gov. Larry Hogan took a middling approach, keeping the state’s mask requirement but loosening capacity limits on businesses.

Last week, though, the Centers for Disease Control and Prevention released data showing mask mandates and restrictions for in-person restaurant dining were tied to lower COVID-19 infection and death rates last year. And Dr. Rochelle Walensky, the agency’s director, said “now is not the time to relax the critical safeguards that we know can stop the spread of COVID-19 in our communities.” 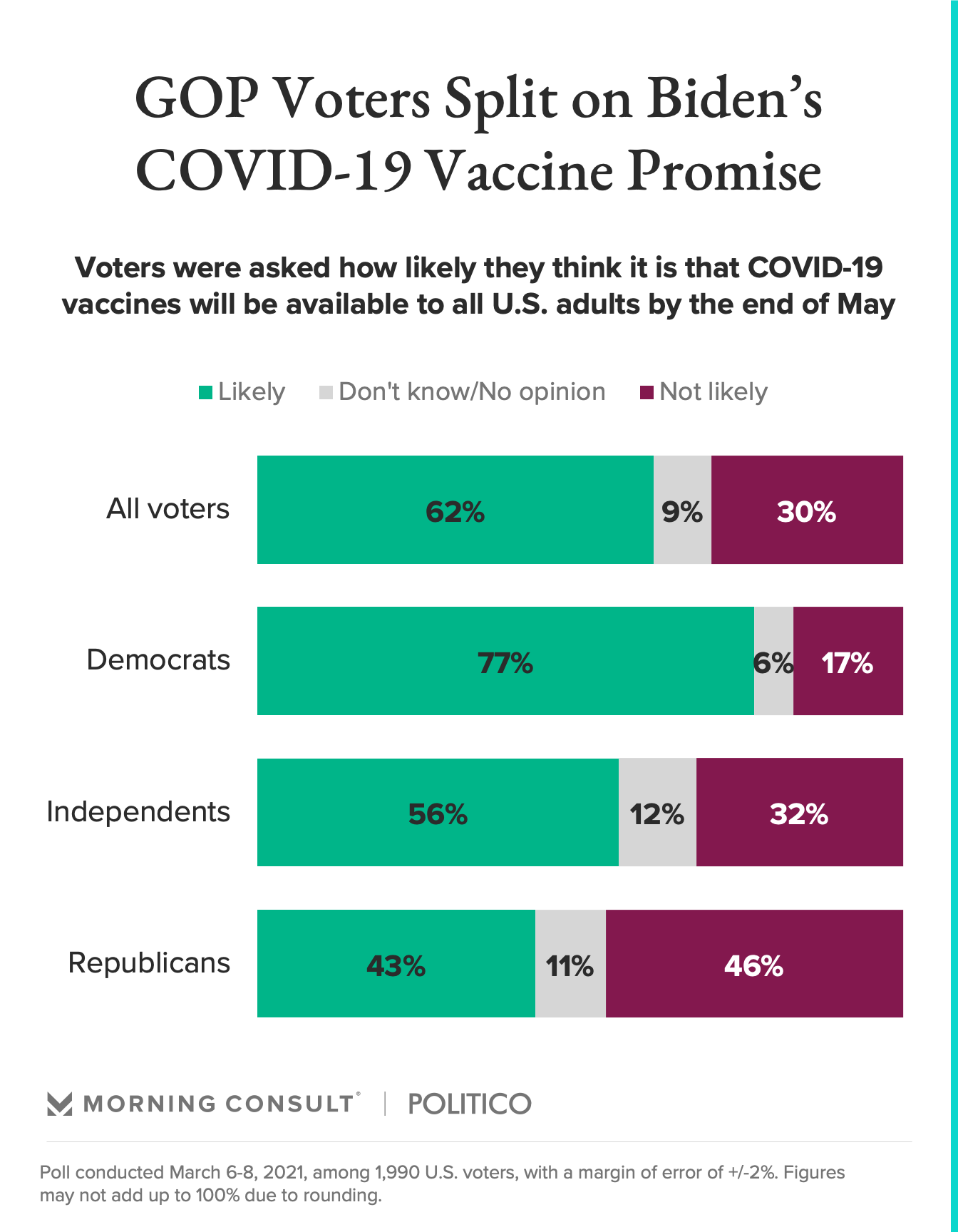 The survey comes as the Biden administration engages in a mad dash to vaccinate as many adults as possible. Last week, the president said there will be enough COVID-19 vaccines for every U.S. adult by the end of May — a timeline 62 percent of voters said is likely, including 77 percent of Democrats and 43 percent of Republicans, the survey found.

But despite most Democrats’ optimism about the vaccination timeline, they generally believe it will take longer before people can stop social distancing and return to public spaces. While 44 percent of Republicans said that moment will come within three months, for example, just 28 percent of Democrats said the same.

Another 41 percent of Democrats said they think people will need to continue distancing and staying away from public places for more than six months, while 28 percent of Republicans agreed with that timeframe.

Overall, 33 percent of voters thought Americans will be able to ease up on social distancing within the next three months, while 20 percent thought that period would come within six months and 35 percent said it would be more than half a year from now. Another 12 percent didn’t know or had no opinion.