Voters Are Nearly United in Support for Expanded Background Checks 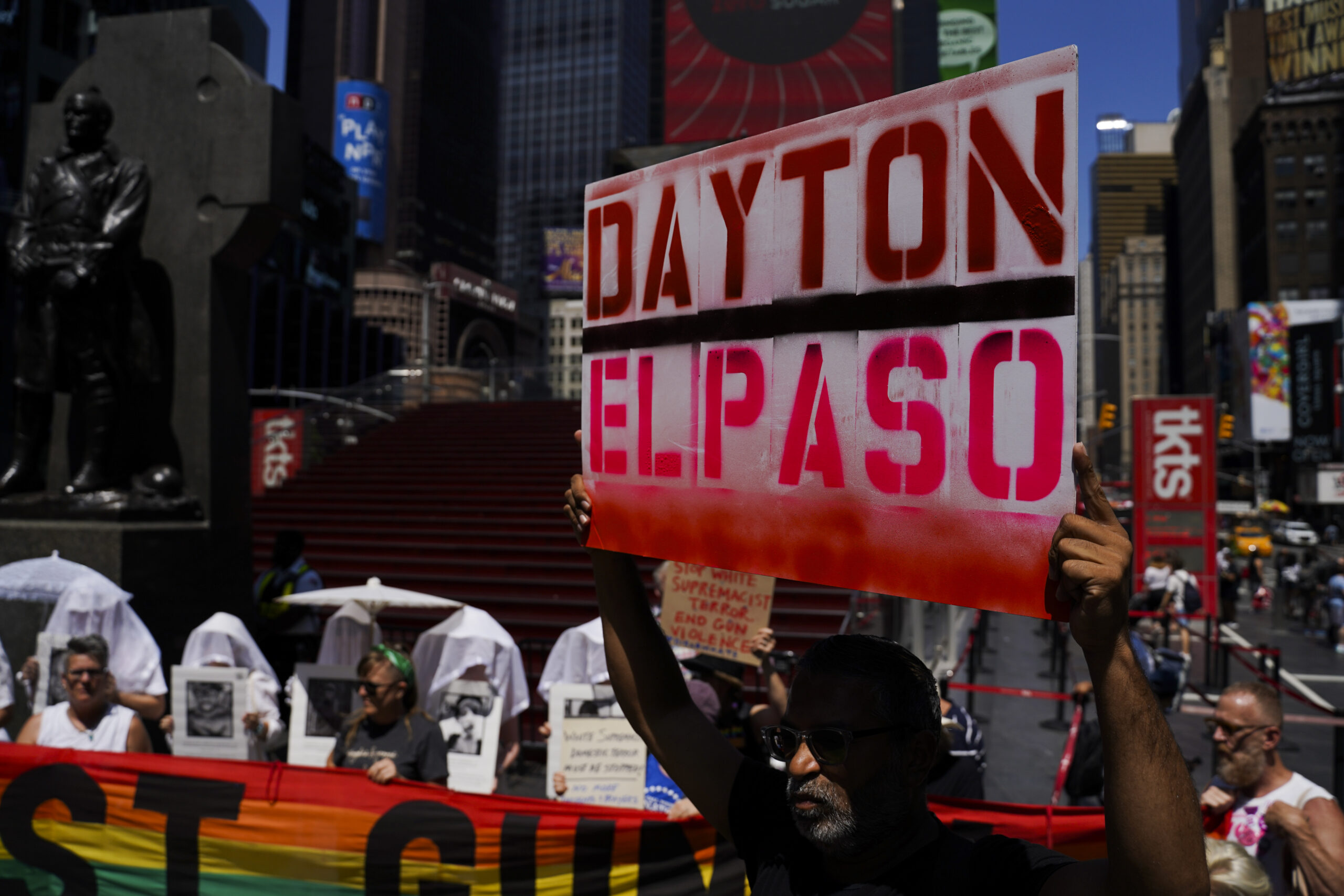 Protesters in New York City hold a rally against gun violence in August 2019 in response to mass shootings in El Paso, Texas, and Denton, Ohio. With the House set to take up a bill to require background checks for all gun purchases, new polling shows broad public support for the proposed restriction. (Go Nakamura/Getty Images)
By Eli Yokley

Read the findings on support for gun control from our survey conducted after the Uvalde, Texas, shooting.

The House is moving forward this week with legislation to strengthen laws governing background checks for gun sales – and they’re armed with public support.

According to the latest Morning Consult/Politico survey, 84 percent of voters support requiring all gun purchasers to go through a background check – making the measure more popular than the widely backed $1.9 trillion COVID-19 relief plan or the policing and voting rights bills the chamber advanced last week.

What’s more, the level of backing for expanded background checks is just shy of the 90 percent who supported it in August 2019 after deadly mass shootings in El Paso, Texas, and Dayton, Ohio, indicating that the measure’s broad popularity – it’s backed by more than 9 in 10 Democrats and 3 in 4 Republicans in the latest survey – is not entirely tied to the news cycle or a particular tragedy. 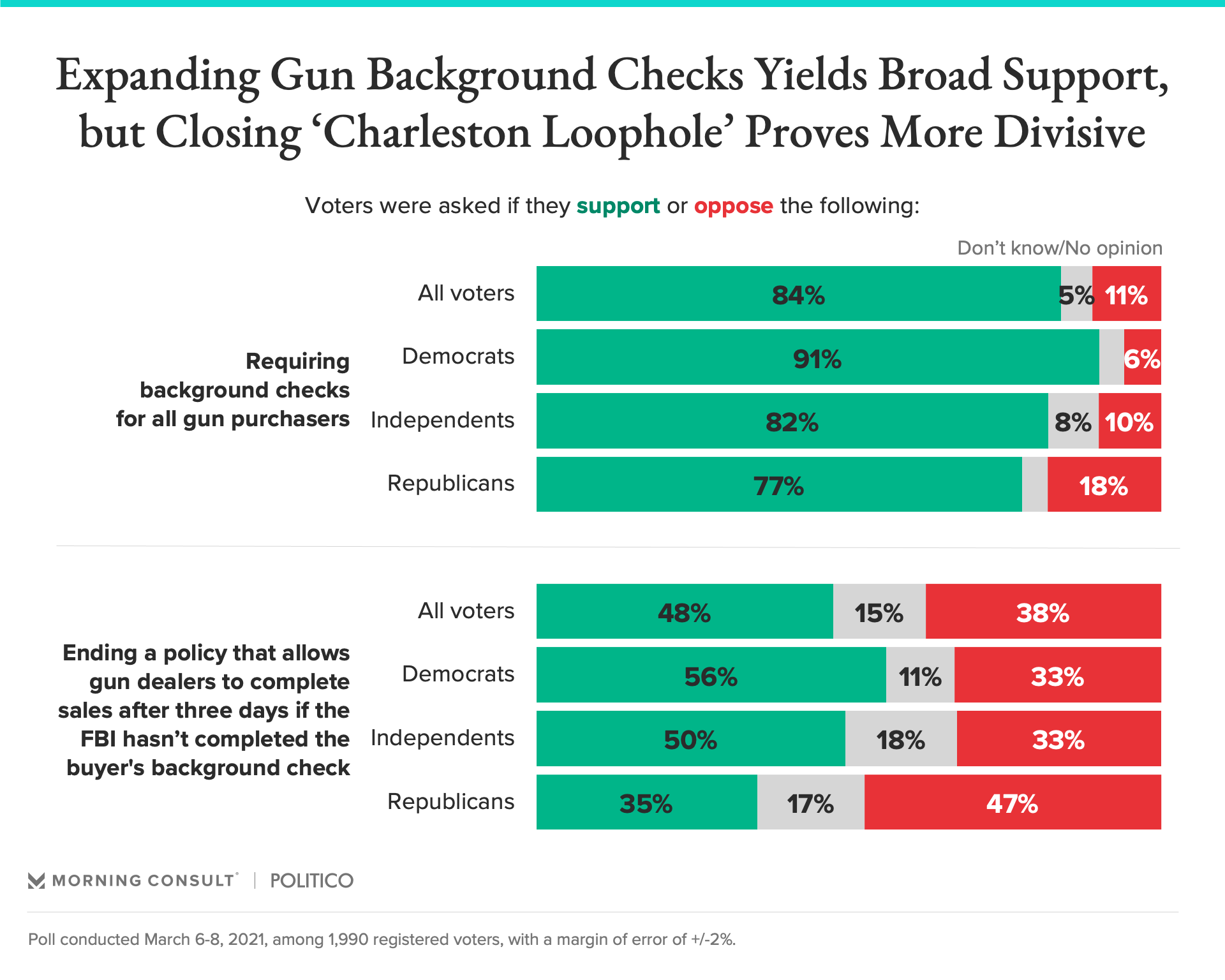 Along with the background check legislation, the House is also advancing legislation sponsored by House Majority Whip James Clyburn (D-S.C.) that would change the three-day waiting period to purchase a gun to 10 days if the Federal Bureau of Investigation has not yet completed the buyer’s background check. That measure takes on the so-called “Charleston loophole,” named for the deadly mass church shooting in 2015, in which the shooter evaded measures meant to block him from purchasing a weapon.

The survey was conducted March 6-8 among 1,990 registered voters, with a margin of error of 2 percentage points.

The coronavirus pandemic and its closures of public spaces contributed to a sharp decline in mass killings last year, which in turn took gun policy off the political front burner for most of the 2020 election cycle. Democrats on Capitol Hill have a narrow advantage over their Republican counterparts on the topic, with 44 percent of voters trusting them over congressional GOP lawmakers on gun policy, while 38 percent trust Republicans more. 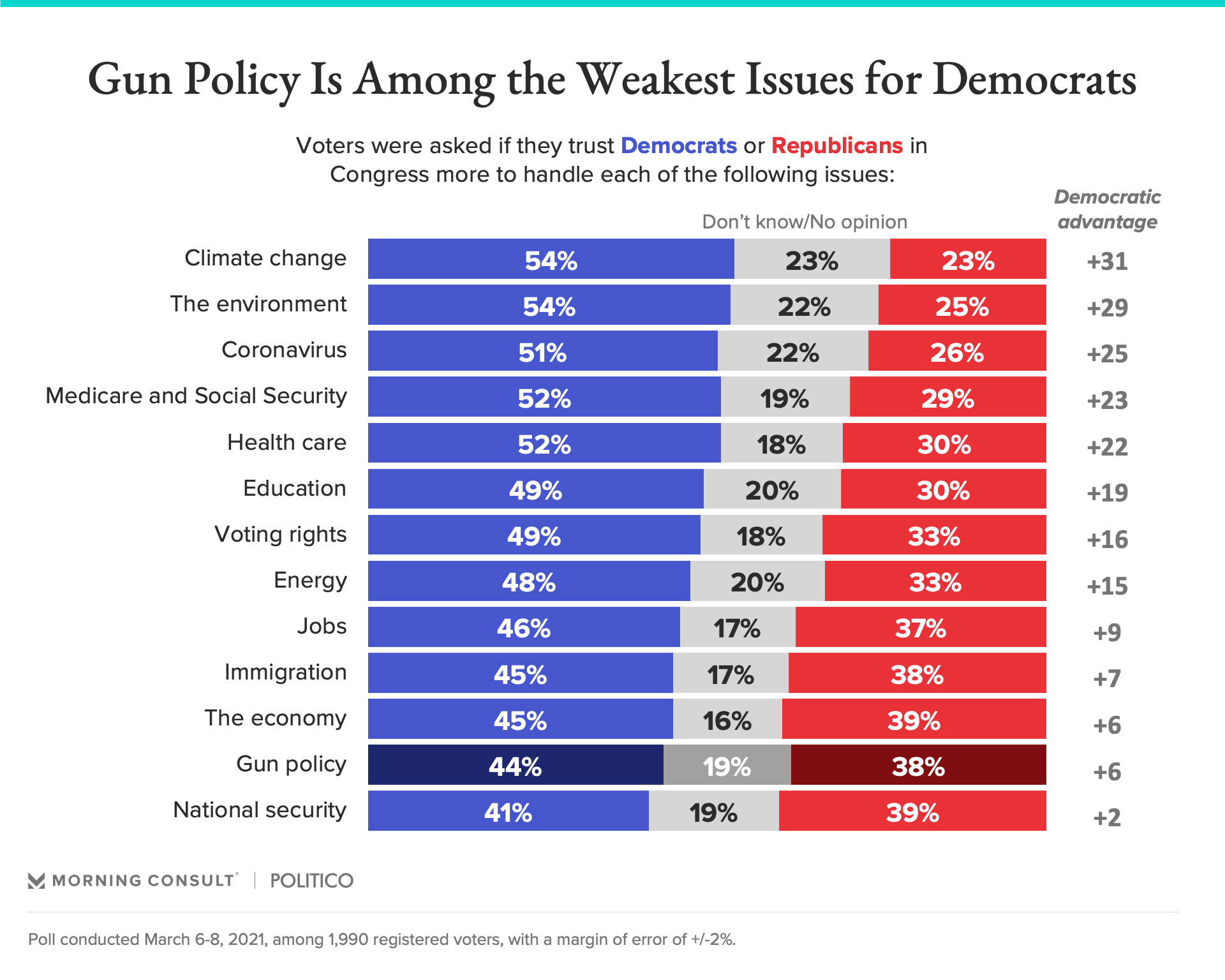 But that 6-point trust edge is much smaller than their advantage on the party’s top issues – including the pressing COVID-19 pandemic and the growing threat of climate change. Biden’s numbers are even weaker on the subject of gun policy, according to a recent Morning Consult/Politico poll: 37 percent approve of his handling and 39 percent disapprove, marking the only issue where he is underwater, in part due to a disproportionate share of Democratic voters who say they do not know or have no opinion compared with other issues.

The move on Capitol Hill — which is not likely to move forward in the Senate as long as the chamber’s legislative filibuster remains intact — comes after Democrats advanced legislation to address the pandemic, a subject 2 in 3 voters believe Congress should prioritize. By comparison, just 28 percent of voters said gun policy should be a “top priority,” roughly the same share who said Congress should elevate the passage of a bill to reduce inequality or provide relief to Americans with student loan debt.