With school year coming to a close, sustaining progress in digital learning is crucial, advocates say 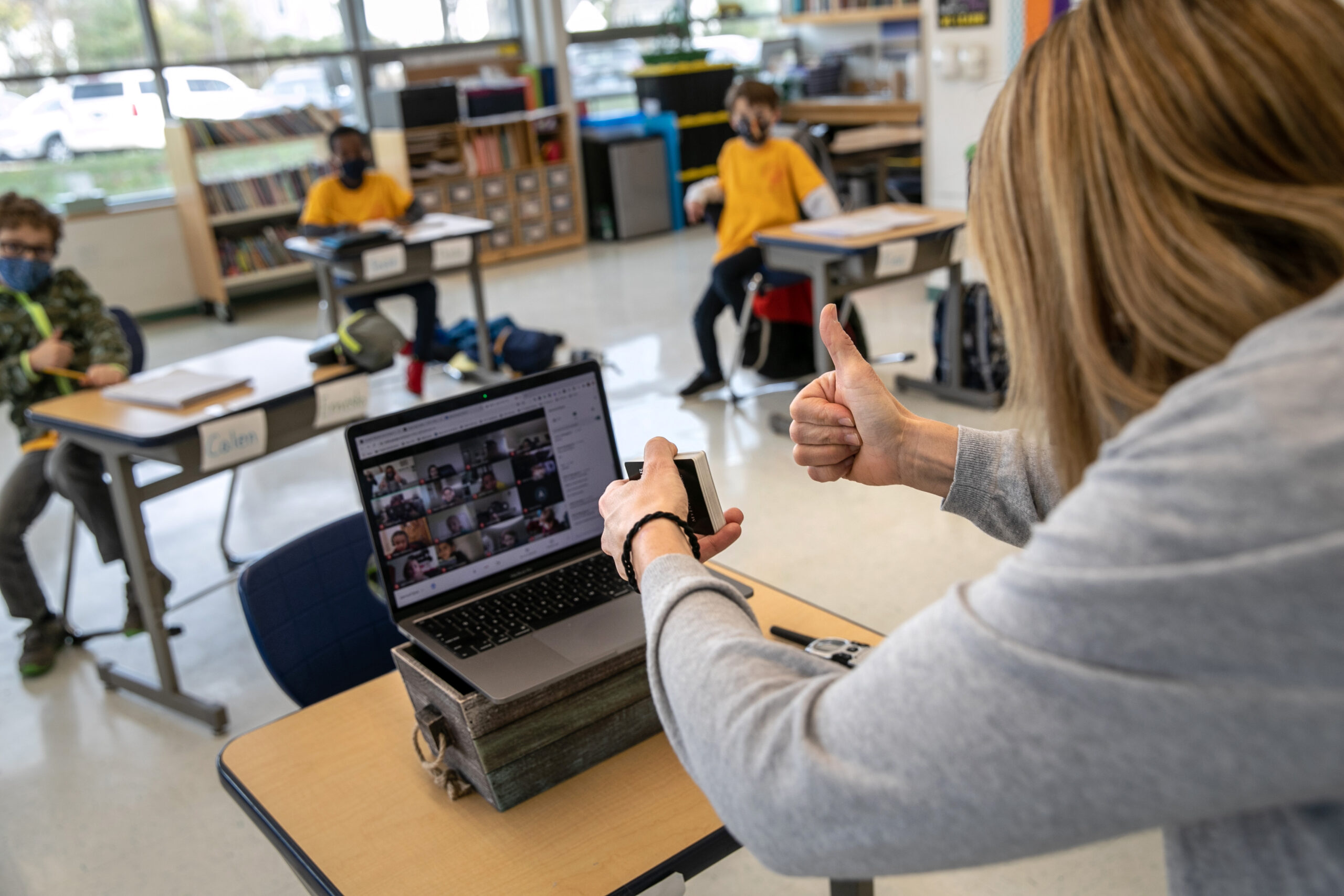 Cara Denison speaks to her third-grade students while live-streaming her class at Rogers International School on Nov. 19, 2020, in Stamford, Conn. (John Moore/Getty Images)
By Sam Sabin

Last March, as schools shut down and turned to remote learning during the onset of the COVID-19 outbreak, school officials and education advocates sounded alarm bells: Schools lacked the digital infrastructure necessary to accommodate remote learning for all, they said, and they would need government funding to help.

In those first few weeks, now-acting Federal Communications Commission Chairwoman Jessica Rosenworcel wrote an op-ed and advocates took to the Hill to urge the agency and Congress to reform a government program, known as E-rate, to help schools and libraries address the homework gap by buying laptops, hotspots and other connected devices for students’ at-home learning. One of those first efforts resulted in Sen. Ed Markey (D-Mass.) calling for $4 billion in relief.

But with the dollars doled out so far into the crisis and the end of the school year fast approaching, expectations for how the additional funding will be spent have shifted among school officials and advocates from getting quick fixes, like mobile hotspots, to more long-term projects that will ensure that schools can sustain the progress they’ve made to become more digital-learning friendly.

“This is a down payment on something that the education community has fought for for years,” said Reg Leichty, policy counsel for the Consortium for School Networking (CoSN), which represents school district technology leaders. “Even outside of a pandemic, we now live in a moment where access to online resources and enrichment activities should be part of even a normal school year.”

For most of the pandemic, schools have relied mostly on outside partnerships and community donations to get their students online, said Amina Fazlullah, policy counsel at Common Sense Media.

“Without a coordinated support program from the federal government that was focused on technology and distance learning, schools were at the mercy of whatever options were in their communities, and sometimes these were promotional options that would only last for a handful of months,” Fazlullah said. “There’s been so much uncertainty in what the resources would be available for schools to tap into to be able to plan.”

Efforts to get E-rate into prior COVID-19 relief packages were often held up by partisan divides, with Republicans questioning whether doling out funds through the existing program was the best vehicle, said Jon Bernstein, president and founder of the Bernstein Strategy Group, a lobbying firm that represents the likes of the American Federation of School Administrators and the International Society for Technology in Education.

A Senate Commerce aide told Morning Consult that the E-rate funding was one of the programs that Republicans challenged this time around under the “Byrd rule,” which determines what kinds of funding could be included through the reconciliation procedure that the American Rescue Plan followed.

The closest the funds came to being included was in December’s relief package, when Bernstein said it’s his understanding that “negotiations didn’t come to fruition in time to make it into the final package and the funding was dropped.”

With a Democratic-led Congress and fewer broadband provisions competing for inclusion in the current relief package, E-rate stood a better chance, the Senate aide said.

Related: This Education Nonprofit Was Set to Shutter After Hitting Its Connectivity Goal for Schools. COVID-19 Created a New Mission

Now, while some schools eye reopenings and fewer students require daily at-home internet to attend classes, John Windhausen Jr., executive director at the Schools, Health and Libraries Broadband Coalition, said the need for funding is still “as strong as ever,” given that students lacking at-home internet for school work predates the pandemic. A report from the Democratic staff of the Senate Joint Economic Committee found in September 2017, years before the current crisis, that 12 million children lived in households that didn’t have a broadband connection.

Winderhausen noted that some schools are looking into standing up their own LTE networks, and Bernstein added that others are seeing whether they can purchase at-home internet services for students that are “affordable but also functional,” so they don’t have to rely on the goodwill of community partners or service providers.

While stakeholders agree that the roughly $7.2 billion included in the relief deal is monumental, more can be done on a permanent basis. A June report from Common Sense and Boston Consulting Group estimated that it will cost between $6 billion and $11 billion each year to keep students connected at-home.

“Our hope and expectation is that these sorts of mechanisms that Congress is putting into place are looked at as pilot programs,” said Greg Guice, director of government affairs at Public Knowledge and a former FCC employee. “It makes sense as kids are asked to do more through internet connectivity that the system that was designed to get kids access to the internet continues to evolve with how kids use the internet for school purposes.”

One possible source for additional E-rate funding could come from a newly reintroduced $94 billion broadband expansion bill from Rep. James Clyburn (D-S.C.) and Sen. Amy Klobuchar (D-Minn.), which includes $2 billion to further fund E-rate. Lawmakers told The Washington Post that they hope to gain momentum on the bill through the infrastructure package that Congress is expected to take up in the coming weeks.

“The homework gap is a continuing issue, and once we’ve dealt with the emergency, we have to look at more permanent solutions,” Bernstein said. “Hotspots are fine, and they are useful, but they are not useful for everyone.”