Racial Gaps in Vaccine Willingness Are Narrowing, but Partisan Ones Persist

Gap between Black and white adults is 6 points, compared to 25 points among Democrats, Republicans 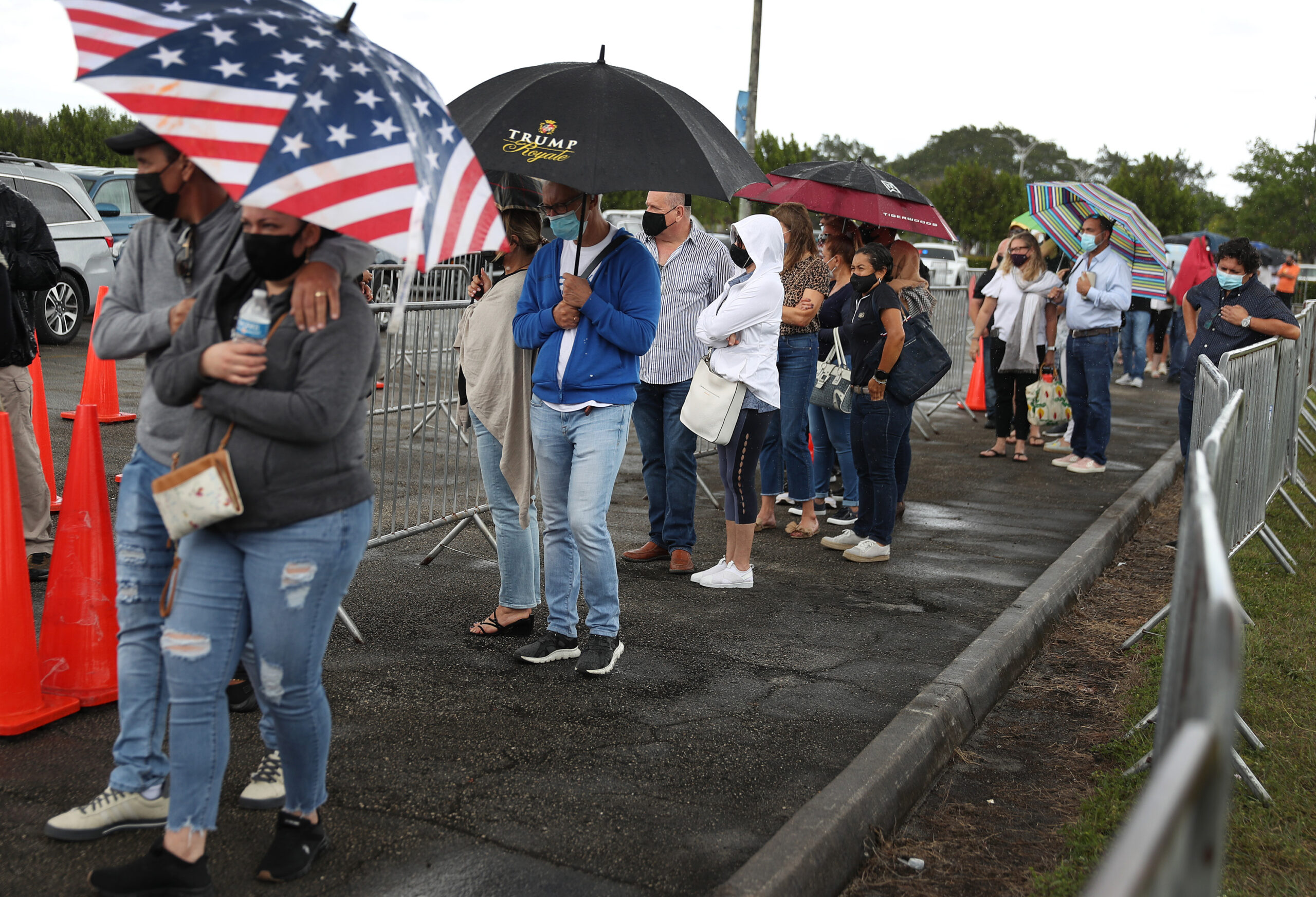 People stand in line to receive a COVID-19 vaccine at the Miami Dade College North Campus on March 10, 2021, in North Miami, Fla. As the COVID-19 vaccination campaign ramps up, so has the public’s willingness to get a shot, according to new Morning Consult data that shows 68 percent of U.S. adults say they would get vaccinated. (Joe Raedle/Getty Images)
By Gaby Galvin

As the COVID-19 vaccination campaign ramps up, so has the public’s willingness to get a shot, according to new Morning Consult data that shows 68 percent of U.S. adults say they would get vaccinated.

The data also signals where the gaps in vaccine willingness have narrowed — and the challenges that could emerge as the country barrels toward mass immunization.

In the first months of the vaccine rollout, the federal focus has been on getting vulnerable groups vaccinated quickly, given demand for the shots still outstrips supply. But in the coming weeks, as states open up eligibility and manufacturers deliver additional doses, officials are preparing to shift gears and appeal to groups that have expressed wariness about getting vaccinated at all.

“We have to understand that there’s not a singular underlying reason, but many reasons” driving vaccine hesitancy, Dr. Rochelle Walensky, director of the Centers for Disease Control and Prevention, told reporters Monday.

For example, health officials have warned for months about vaccine hesitancy among Black communities, driven by their experiences with racism and a lack of trust in medical and government institutions that have also failed them historically. But the latest data shows 62 percent of Black adults would get vaccinated, just 6 percentage points below the share of adults overall who said they’d get a shot. 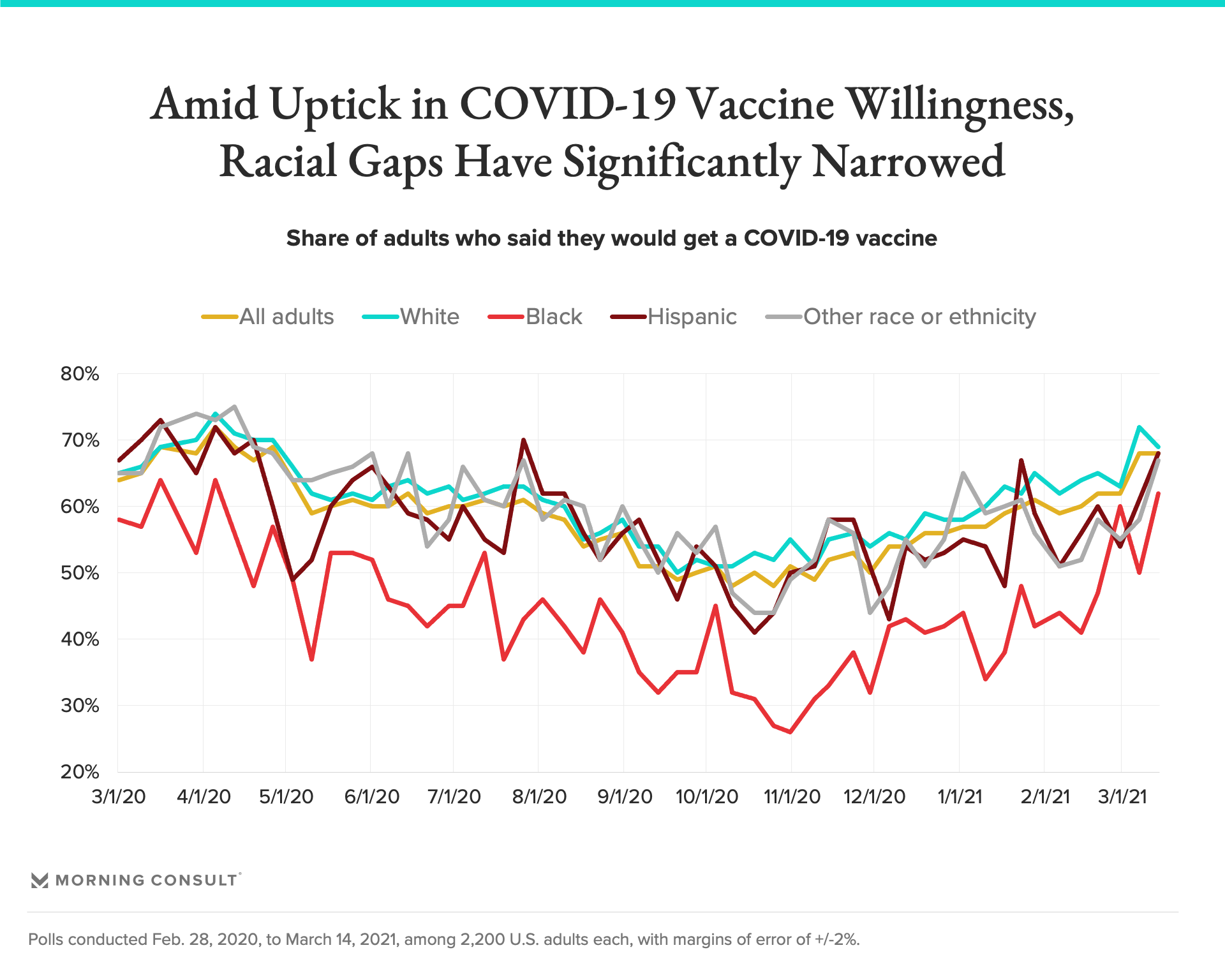 The findings seemingly bolster the view that it’s a lack of access, not a lack of willingness, that’s driving lower vaccination rates among Black Americans. The CDC has race and ethnicity data for about half of people who have been fully vaccinated: 69 percent are white, while 7 percent are Black and 7 percent are Hispanic.

Other gaps in vaccine willingness are also beginning to narrow, with rising shares of women, adults in rural areas and those without college degrees saying they’d get a shot at about 3 in 5 apiece.

The partisan gaps are more stubborn. While the share of Democrats who said they’d get vaccinated reached 83 percent, an all-time high in Morning Consult polling, that level among Republicans, now 58 percent, has crept up at a much slower pace in recent weeks, with a double-digit gap since early November between adults of the two parties. 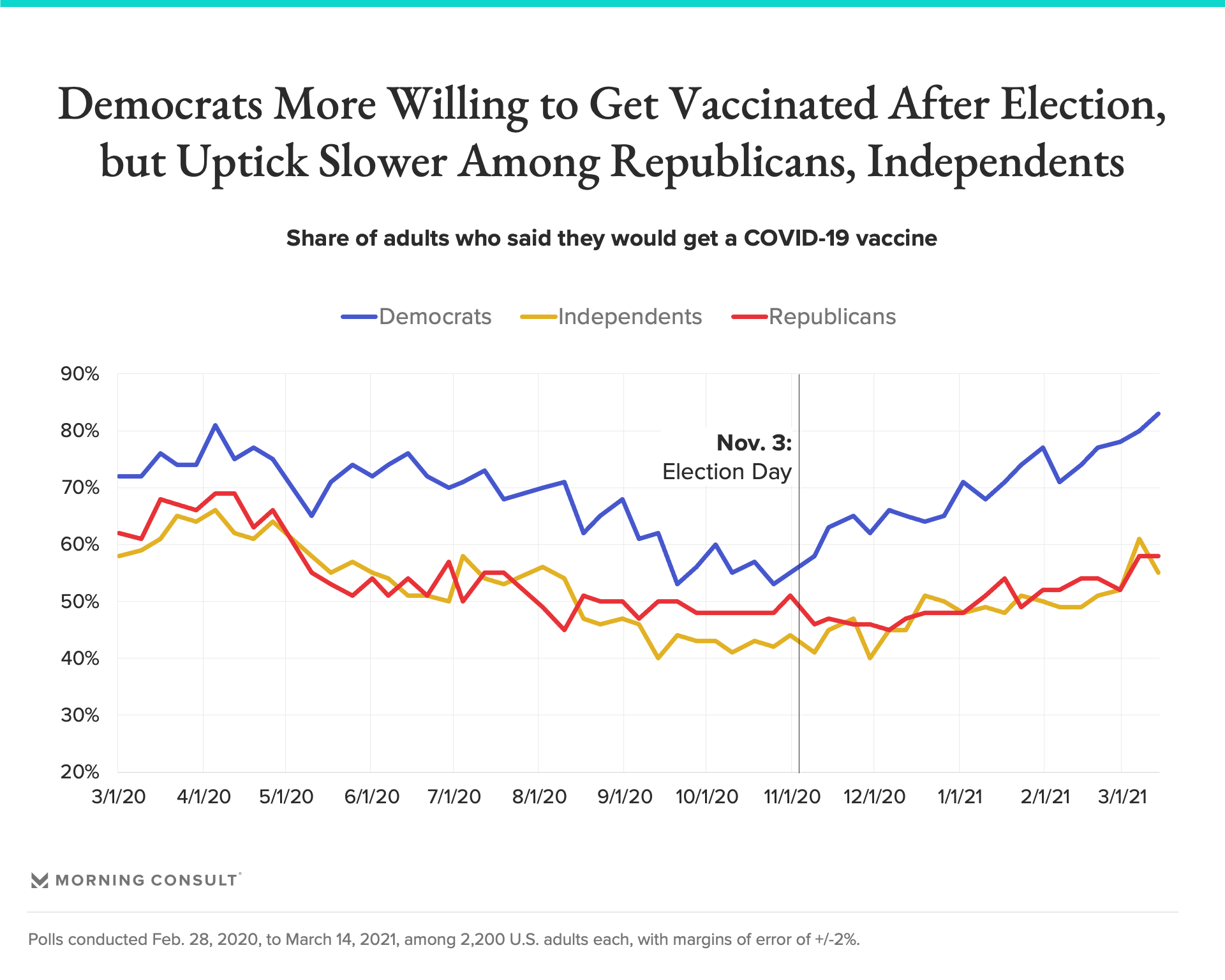 Even so, Andy Slavitt, who is helping lead the federal COVID-19 response, said the administration is also leaning on word-of-mouth and broader community uptake to increase vaccine willingness. Notably, 55 percent of adults said they know someone who’s been vaccinated, with Democrats and Republicans about equally likely to say as much.

“We know that people are not looking to be convinced by the government or by some other entity,” Slavitt told reporters. “They want to have conversations with people locally in their community, whether it’s a doctor or pharmacist or other people that they trust.”

The latest Morning Consult survey was conducted March 12-14 among 2,200 U.S. adults and has a 2-point margin of error.