Among the Three Stimulus Packages, the Latest Has Led to the Fastest Rise in Consumer Confidence

Unlike the first package, the impact of the second bill on consumer confidence was not derailed by surges in the spread of the virus, highlighting the importance of containing the virus to accelerate the economic recovery, writes Morning Consult economist John Leer 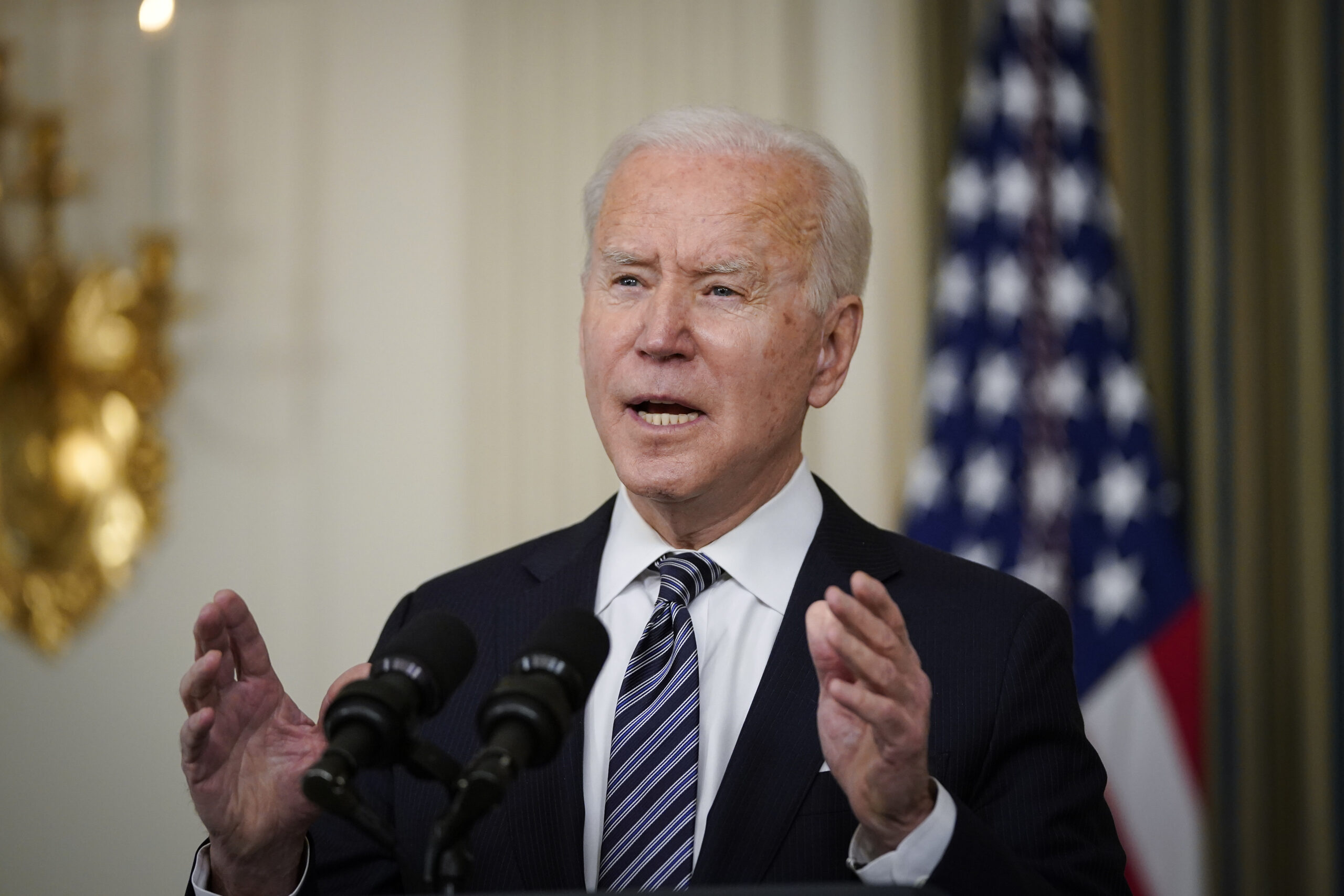 President Joe Biden on March 15, 2021, talked about the implementation of the $1.9 trillion stimulus package. (Drew Angerer/Getty Images)
By John Leer

On March 11, President Joe Biden signed into law the $1.9 trillion American Rescue Plan, providing most Americans with a third round of stimulus checks and extending federal unemployment benefits through September. While it remains too soon to assess the full economic impact of the bill, Morning Consult’s daily U.S. Index of Consumer Sentiment provides an early look into how consumer confidence is reacting to the law, and how these reactions compare to the first to coronavirus stimulus bills.

U.S. consumer confidence is on a tear

The rapid increase in confidence following the third stimulus bill reflects the size of the additional funds included in the third bill combined with the timeliness of those funds. The American Rescue Plan provides most Americans with $1,400 stimulus checks, larger than both of the checks provided in the previous rounds of stimulus. 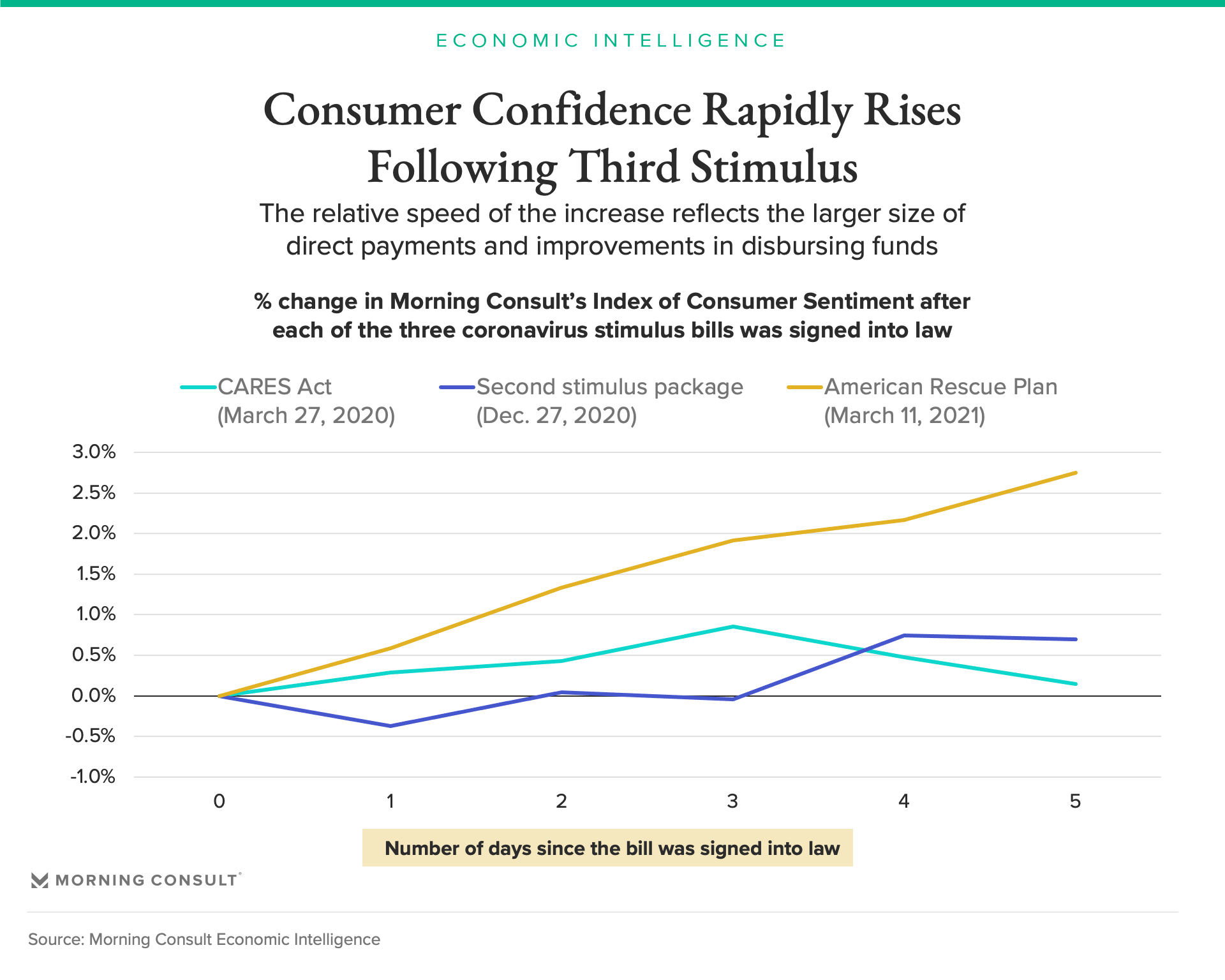 Additionally, some consumers started receiving their checks a day after the American Rescue Plan was signed into law, down from two days for the second stimulus check and significantly down from three weeks for the first stimulus check to start being sent.

The third check also comes less than two months after Americans began receiving the $600 checks included in the second round. As a result, the second coronavirus relief package continues to act as a tailwind to U.S. consumers. While legislators allowed economic activity to contract prior to passing the second stimulus bill, they were more proactive the third time around.

High-income consumers are missing out

The trajectory of the U.S. economic recovery is not only a function of how quickly confidence rebounds, but also which demographic groups experience the impact of the stimulus. Over the course of the three stimulus bills, the single payer upper limit decreased from $100,000 to $87,000 to $80,000, with similar decreases occurring for joint filers and heads of households. These changes were supposed to better target Americans who needed the money the most, and Morning Consult’s data indicates that changes in the eligibility criteria achieved their stated purpose. 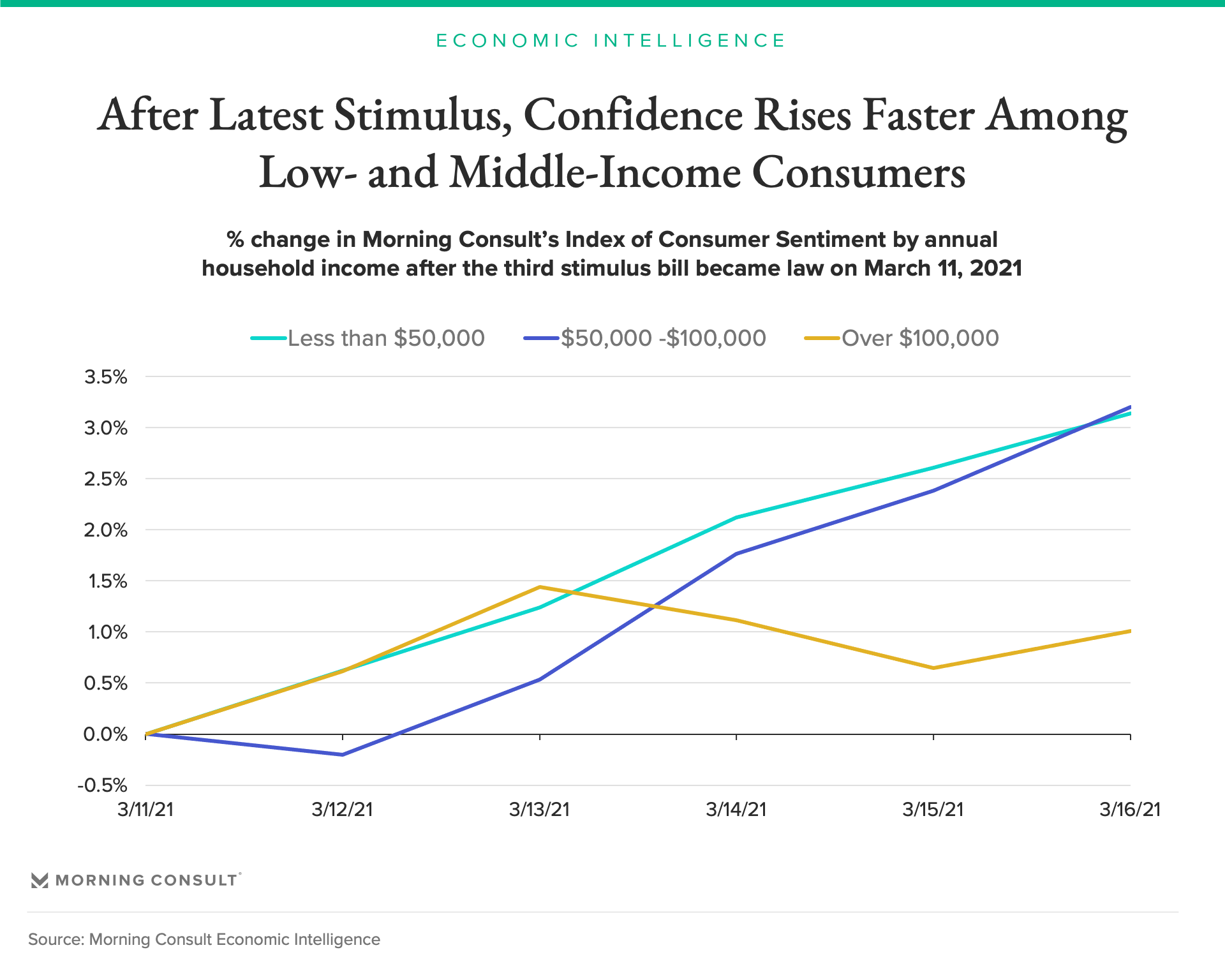 This development marks a significant departure from the first two rounds of stimulus. As shown in the chart below, high-income adults experienced a faster, larger and more sustained increase in confidence following the signing of the CARES Act than middle- and low-income adults. Not only were low-income consumers more likely to experience difficulties and delays receiving their CARES Act stimulus payments, their employment outcomes, job security and personal finances were more vulnerable to economic restrictions caused by the virus. 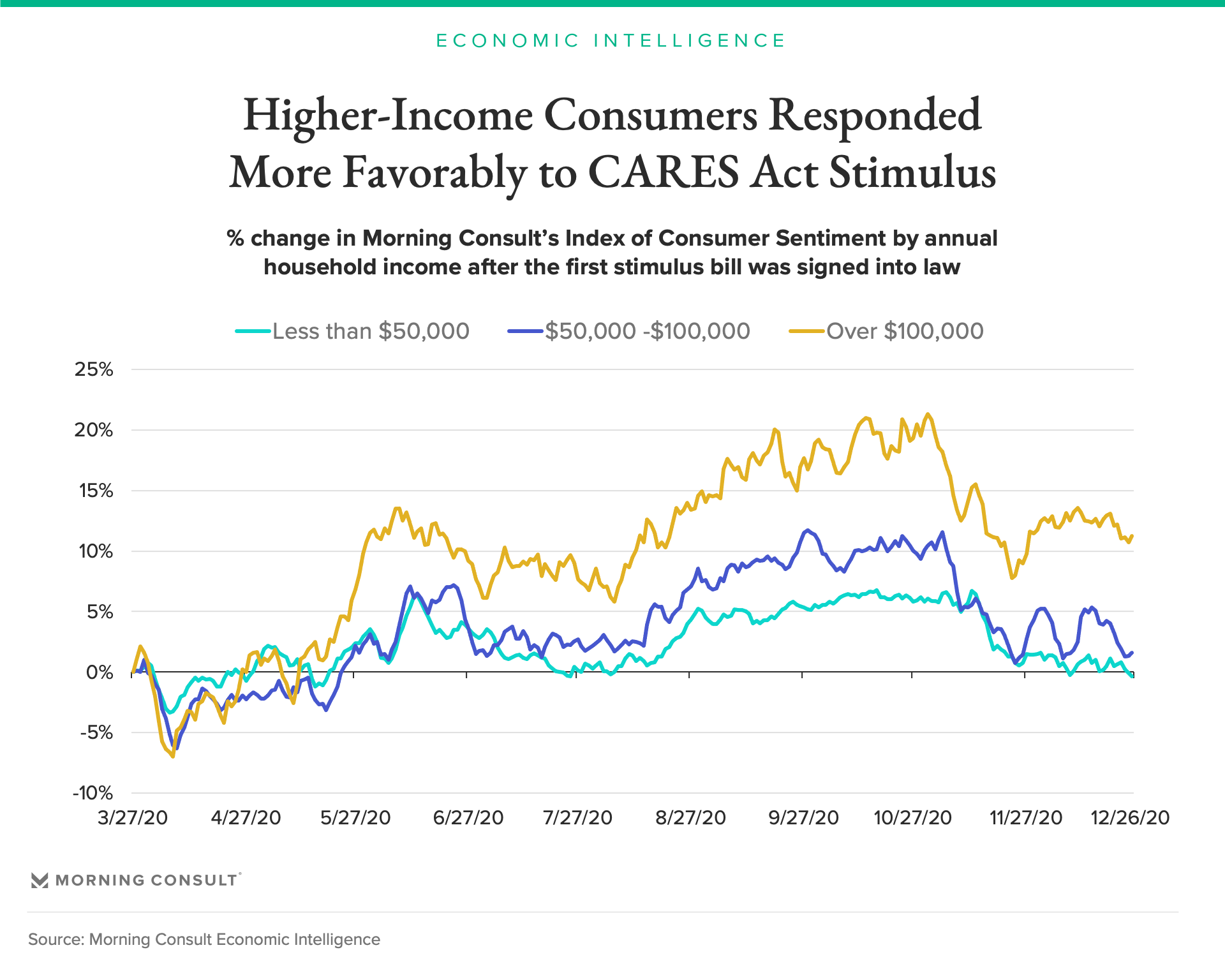 Consumers across the income spectrum responded almost identically following the second stimulus package. Changes in the eligibility criteria and implementation partially explain the differences in consumers’ reactions to the first two rounds of stimulus. Equally important, the dramatic decrease in the spread of the virus in January and February increased employment in low-wage sectors while driving stock prices higher, acting as a tailwind to consumers across the income spectrum. 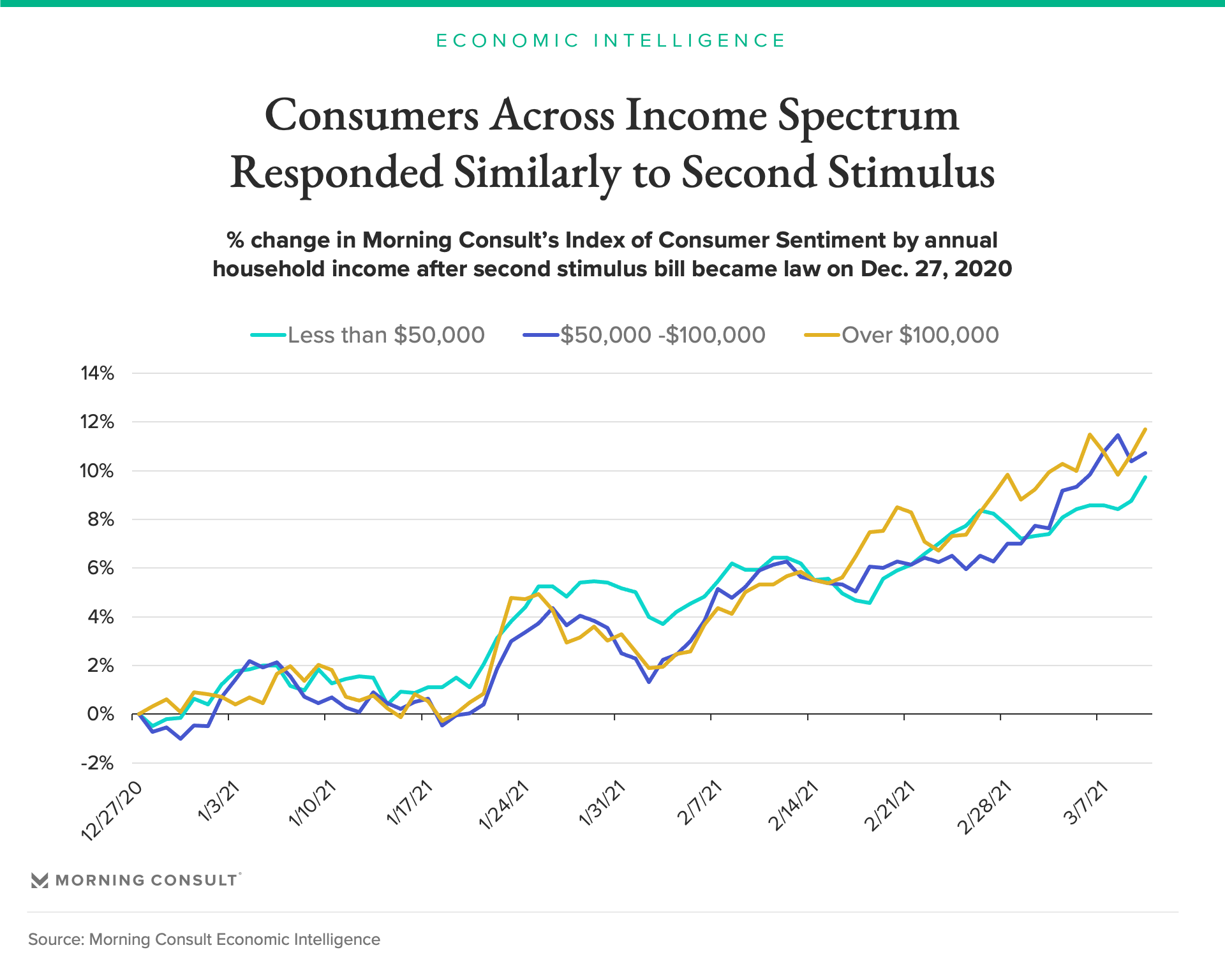 Stimulus-induced confidence boost to last through end of summer

With the passage of the third stimulus bill, the trajectory of the U.S. consumer and U.S. economy for the next five months fundamentally depend on how rapidly the virus spreads and how quickly Americans are vaccinated. Absent additional stimulus, the economic recovery would have been vulnerable from April through June as the effects of the second stimulus evaporated.

If history is an indicator of the future, the boost to consumer confidence from the third stimulus bill should be roughly 10 percent. Morning Consult’s Index of Consumer Sentiment increased by 11.2 percent from the signing of the coronavirus relief bill on Dec. 27 through March 10, a period of 73 days. On the other hand, the ICS peaked 202 days after the CARES Act was  signed, up 10.1 percent. 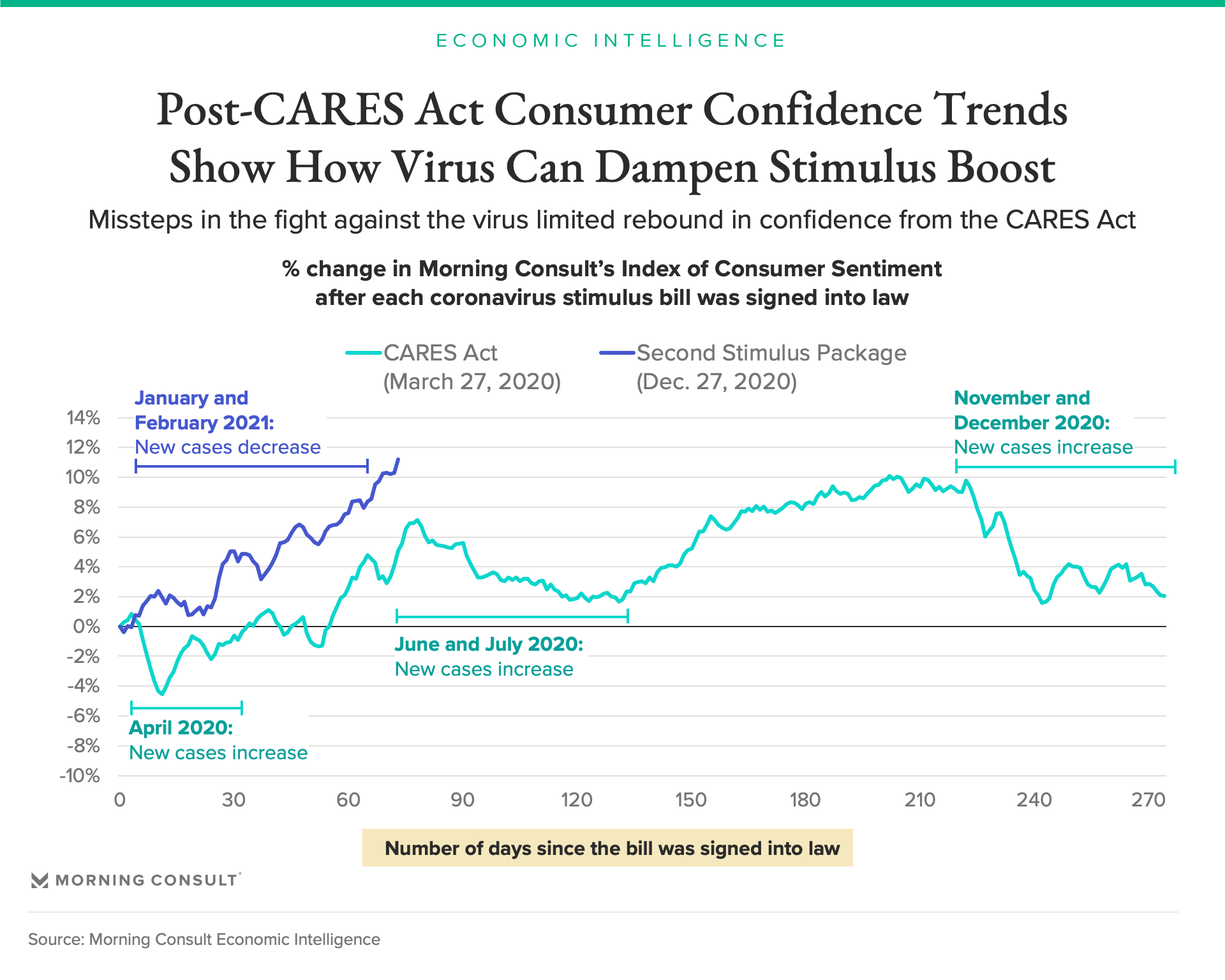 Differences in the spread of the virus explain the differences in the timing of the rebound in confidence. The second round of stimulus benefited from a rapid decrease in new cases in January and February following the signing of the second stimulus bill. On the other hand, new cases increased in April following the signing of the CARES Act and again in June and July, making it more difficult for stimulus money to noticeably improve consumers’ outlook.

As long as new cases remain relatively stable, the American Rescue Plan should support increases in U.S. consumer confidence over the next five months, particularly among low- and middle-income Americans whose jobs and finances remain more vulnerable to the economic consequences of the virus.