Talk of a Border Crisis Is Breaking Through to Voters, Elevating Immigration and Security Concerns

Since Biden’s inauguration, voters have increasingly prioritized security as a voting issue and congressional action on immigration 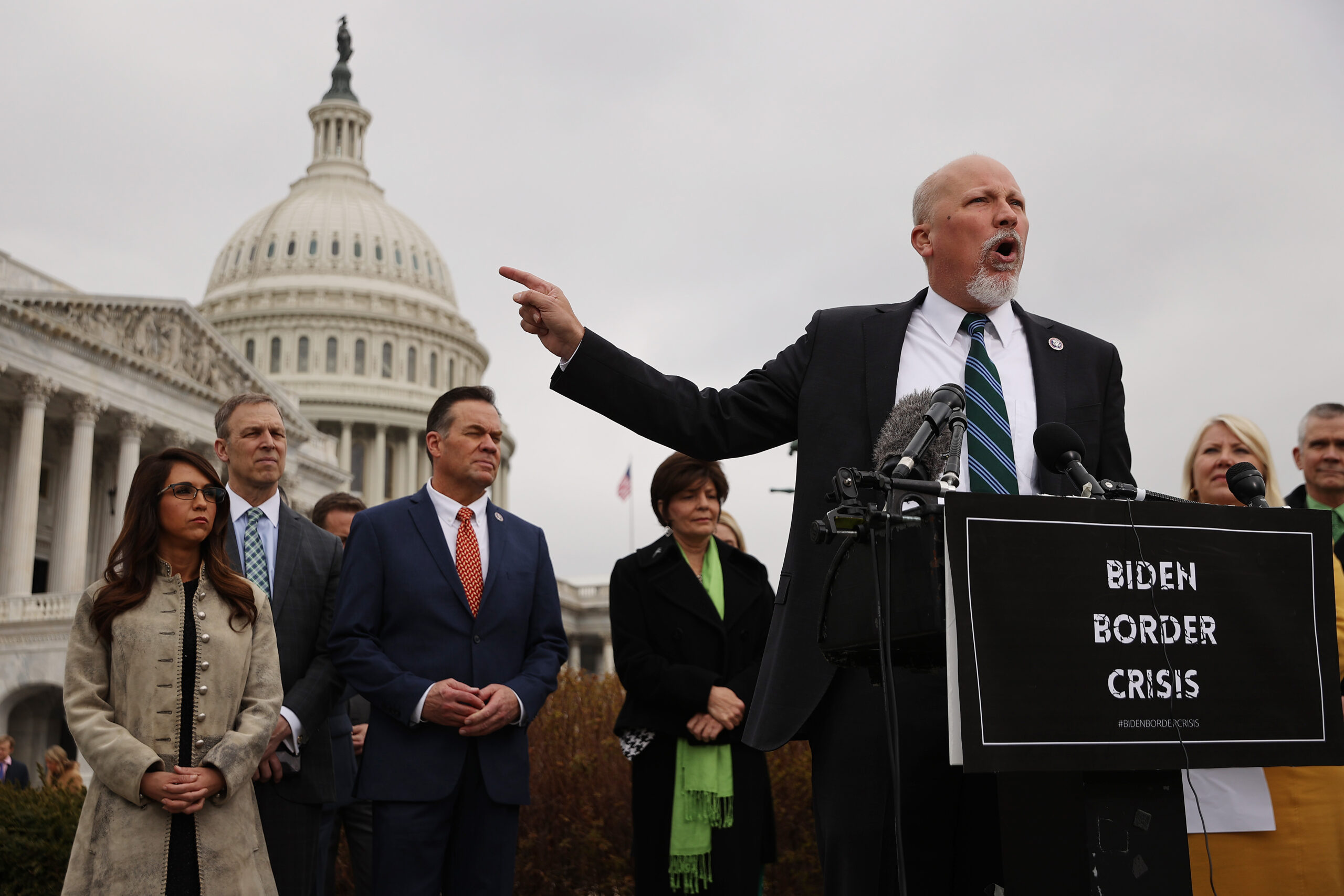 Rep. Chip Roy (R-Texas) speaks outside the Capitol during a March 17 news conference with members of the House Freedom Caucus about immigration on the U.S.-Mexico border. A new poll shows half of voters agree with Republicans' charge that there is a crisis at the border. (Chip Somodevilla/Getty Images)
By Eli Yokley

The issue of an increasing number of young migrants arriving at the U.S.-Mexico border – viewed by many as a crisis – has caught voters’ attention, and appears to be exacerbating concerns about America’s security.

According to the latest Morning Consult/Politico poll, 15 percent of voters identified security issues – including border security, terrorism and foreign policy – as their top set of federal concerns, up 4 percentage points since President Joe Biden took office in late January. The movement was driven largely by Republican voters, 27 percent of whom now say security is their top priority – up 5 points over the past two weeks. 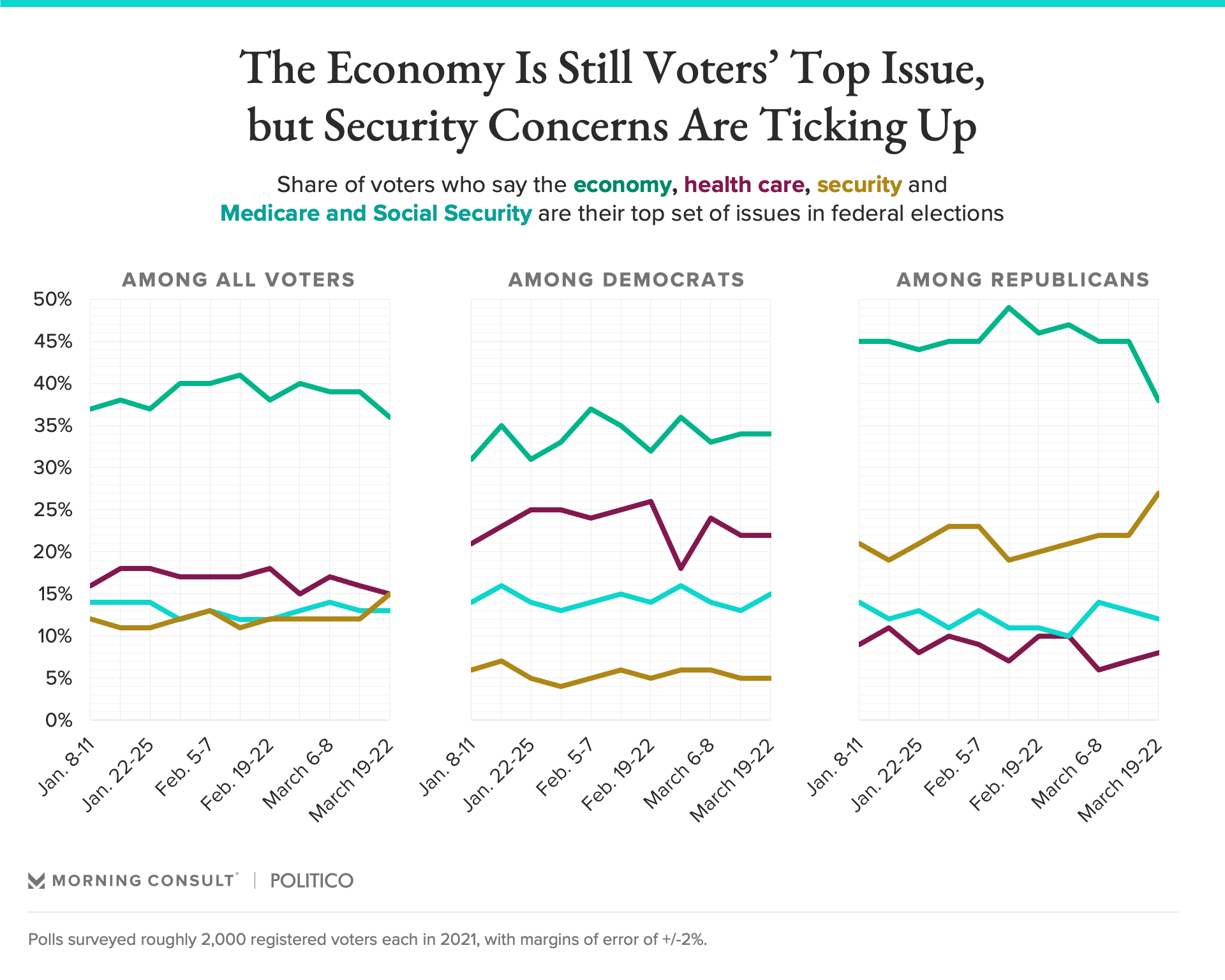 The migrant surge has gained prominence in the national media as the conversation in Washington moved past the haggling over the $1.9 trillion COVID-19 relief legislation. By the time the March 19-22 survey was conducted, 40 percent of voters said they had seen, read or heard “a lot” about the increasing number of child migrants arriving at the southern border – more than those who said the same of former President Donald Trump’s last-hour pardon spree earlier this year, but fewer than the share of voters who heard “a lot” about the Jan. 6 Capitol riot or Biden’s signing of the coronavirus package.

Still, the developments yielded one of the year’s largest partisan divides on self-reported news consumption where Republicans were more likely to hear about a story, mirroring other immigration-related developments. While Democrats are generally more likely than Republicans to report hearing about a wide array of news events in Morning Consult/Politico polls, the reversal in this case reflects the story’s salience among GOP officials and conservative media. 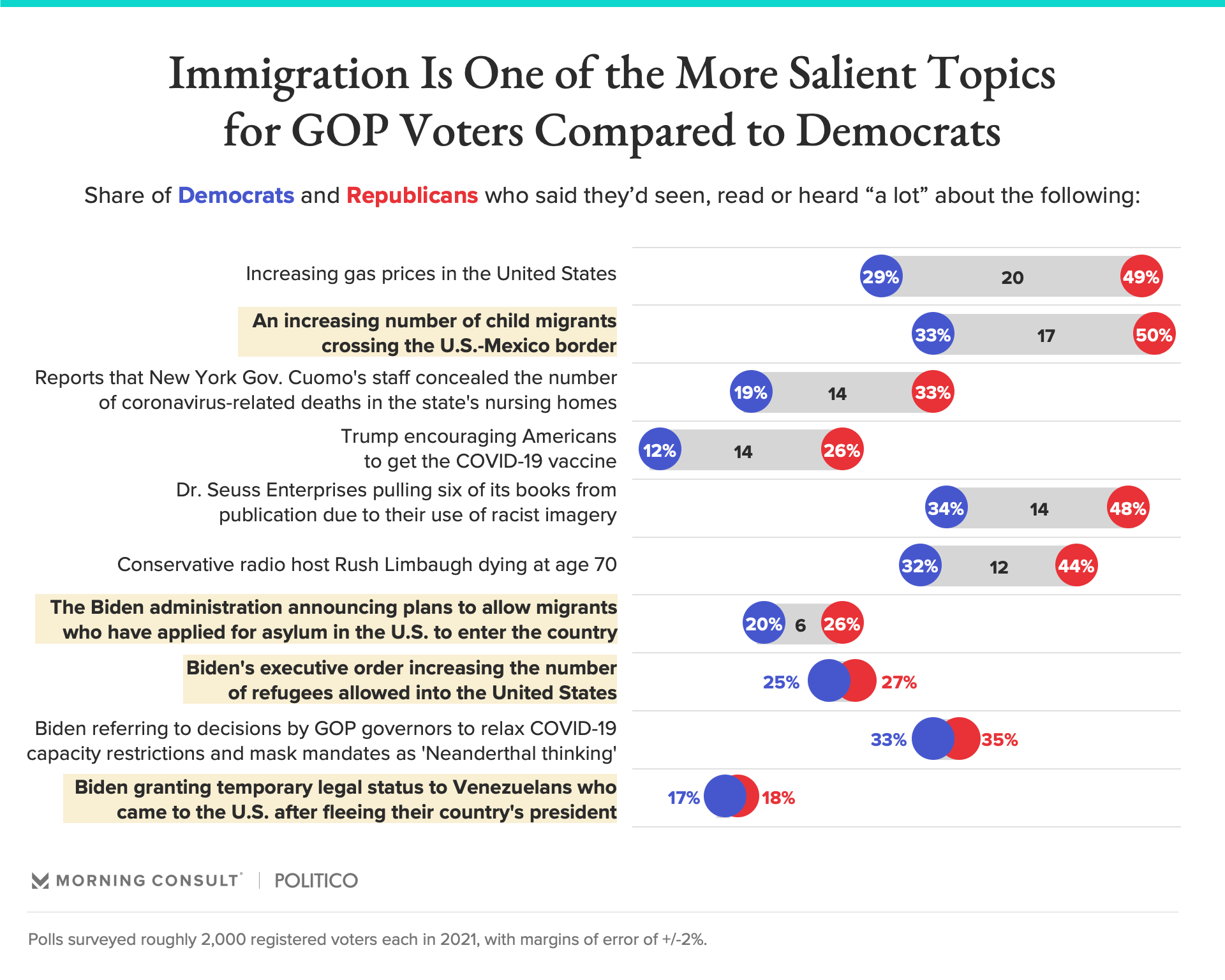 Just a third of Democratic voters said they had heard a lot about the migrant surge, compared with half of Republicans. The partisan split is nearly identical to the salience of news about Dr. Seuss Enterprises’ decision to pull books from publication due to use of racist imagery – a part of the GOP’s push to elevate cultural issues as Biden was advancing his popular COVID-19 proposal on Capitol Hill.

While the bulk of Democratic voters say they have not heard “a lot” about the recent migrant surge — which has resulted in a large number of young asylum seekers being held in government facilities — just 15 percent said they’ve heard “nothing at all” regarding the negative situation unfolding at the U.S.-Mexico border. Still, as Democratic leaders and the White House resist using the word “crisis,” opinions on the extent of the problem largely differ between the parties. 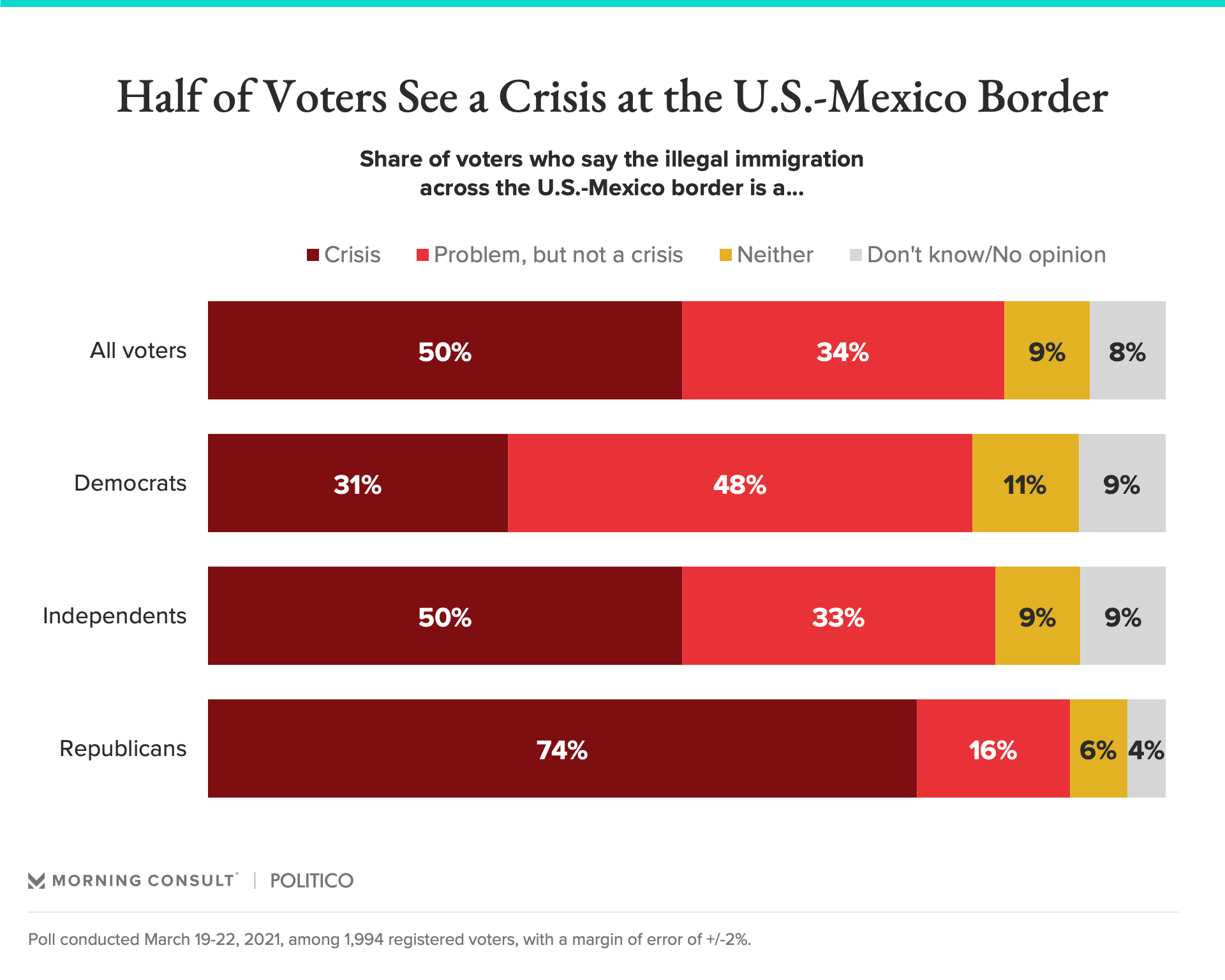 The divide between the two parties on what to call the issue at the U.S.-Mexico border recalls Morning Consult/Politico polling conducted in April 2019, when the Trump administration was facing its own border challenges. At the time, 44 percent of voters – including 19 percent of Democrats and 76 percent of Republicans – said the United States was facing a crisis. The 2019 survey was conducted around the time that the Customs and Border Protection data showed the United States was experiencing a surge of migration — similar to the size of the one currently facing the country — and one that would go on to grow larger into the summer.

Amid the increase in migration, voters are now also increasingly prioritizing congressional action on immigration: 39 percent in the latest poll said passage of an immigration reform bill should be “a top priority,” up 9 points since a survey conducted at the beginning of March.

But as with other major issues facing the country, Democrats currently have an advantage, albeit a slim one: Their proposals to deal with young migrants and provide a pathway to citizenship for those residing in the United States illegally are generally popular, and when it comes to whom voters trust more on Capitol Hill to handle the issue, Biden’s party has a 5-point lead over the GOP, 43 percent to 38 percent.