Records detail how Facebook, Alphabet, Amazon contributed to tech associations over the years 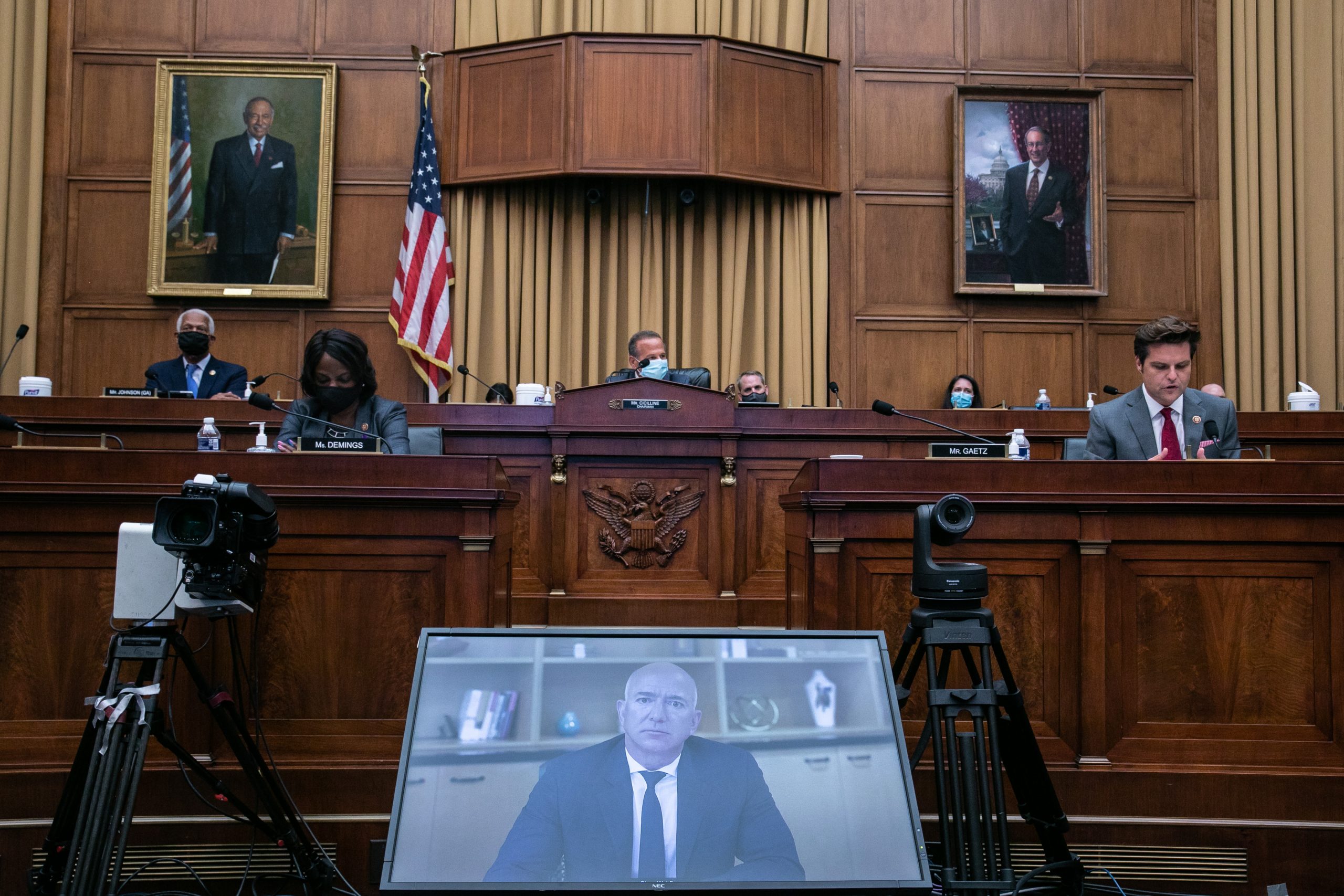 Amazon CEO Jeff Bezos testifies via video conference before the House Judiciary Subcommittee on Antitrust, Commercial and Administrative Law. The hearing on online platforms and market power was held in the Rayburn House office building on July 29, 2020, on Capitol Hill in Washington, D.C. (Graeme Jennings/Getty Images)
By Sam Sabin

That’s where the tech industry trade associations, which the major tech players have poured tens of thousands of dollars into over the years, come in, several lobbyists, former employees in these companies’ policy offices and other stakeholders said.

“Everyone asks what’s going on, and we’re giving them updates, but there aren’t many that are meeting with these offices or the administration right now,” said Kate Mills, a partner at Monument Advocacy, a lobbying firm that counts Amazon as a client, who works on antitrust matters. “A lot of them are leaning on some of the associations to do a little bit of heavy lifting in the early stages.”

In the past year, some key congressional Democrats have been known to stop taking meetings with the large tech companies, especially Facebook. While large companies, no matter the industry, are known to employ a lobbying strategy that includes a mix of member associations, outside firms and their in-house teams, Mills said it could be easier for tech industry trade associations to take up the baton in the early days of the congressional session and administration, at least until formal legislation is introduced.

Despite the unknown of what these reforms could look like, Bruce Mehlman, founder of the lobbying firm Mehlman Castagnetti Rosen & Thomas, said the companies are prepared for the fight.

“There is a reason that well-prior to 2021, the same companies were the largest spenders on lobbying and the most widely engaged with think tanks and third parties in Washington,” Mehlman said.

In 2020, as investigations into the competition practices of Facebook and Amazon carried on, both companies increased their annual lobbying spending: Amazon spent $17.9 million, compared to $16.1 million the year before, while Facebook paid $19.7 million, up from $16.7 million in 2019.

Paired with their traditional lobbying budgets, records collected by the Center for Political Accountability prior to the height of the current tech backlash indicate that the companies have contributed to a wide range of political entities for years. Google-parent Alphabet gave $4,000 to the trade association CompTIA’s political action committee in California in 2018, the latest data for the company.

(Of note, it’s nearly impossible to track every single contribution a company has made to associations, think tanks or other third parties. For instance, Axios reported Thursday that conservative think tank Heritage Foundation rejected a $225,000 contribution from Google and returned a $150,000 donation from Facebook last year.)

In 2019, the most recent data available, Amazon gave at least $10,000 each to myriad tech think tanks, including the American Antitrust Institute, the liberal Center for American Progress and the conservative American Enterprise Institute. It also gave at least $20,000 to the Internet Association’s PACs in California, New York and Illinois, as well as $5,500 to the National Venture Capital Association’s TechPAC.

Apple did not have any political or non-deductible contributions noted in the database.

“These guys are under attack,” said Bruce Freed, president and co-founder of the Center for Political Accountability. “They’re creating the climate” and the contributions are “a way to get their ideas into the broader public policy discourse.”

In interviews with Morning Consult, both the Consumer Technology Association and NetChoice leaned into arguments major tech companies have used to push back against growing scrutiny coming their way: pointing to the sprawling number of competitors cropping up in each company’s sectors and pushing for antitrust reforms that go beyond the tech industry.

CTA, which counts all four of the companies as members, received $10,000 from Amazon in 2019, according to the most recent data collected by the Center for Political Accountability. NetChoice’s member base includes Amazon, Google and Facebook, although CPA’s disclosures only show Facebook contributing to the group every two years since 2015.

Michael Petricone, senior vice president of government affairs at CTA, said the competitive landscape for each of these major companies has changed even in the past six months. The clearest example is the explosion of social media app Clubhouse, whose rise has inspired Facebook and Twitter Inc. to pursue competing versions.

While CTA isn’t “anti-legislation,” Petricone said the association would prefer to see bills and proposals that are transparent, forward-looking and legal. And so far, Hill staffers have been seemingly receptive to these ideas, he said.

But Carl Szabo, vice president and general counsel of NetChoice, said trying to educate lawmakers and those in the executive branch about the ramifications of antitrust reform on the tech industry has been “really tough.” In those meetings, Szabo said he’s mostly reminding people about the long-term impacts of using antitrust as a political weapon, saying it could set a precedent that Democrats could regret whenever Republicans reclaim power.

NetChoice is also pushing to reform competition laws beyond the tech industry, with a one-pager released this month calling for the expansion of antitrust enforcement to include nonprofits, educational institutions and state licensing boards. Szabo referenced an anticipated bill reintroduction from Sen. Mike Lee (R-Utah), the ranking member of the antitrust panel, that focuses on state licensing board competition as something NetChoice would support.

The companies and the trade associations are retooling their strategies at a time when political anxiety about how the tech industry uses its power is at an all-time high, said Adam Kovacevich, a former policy director at Google and scooter company Lime.

“Tech as an industry had a pretty lengthy political honeymoon, and the last five years have been characterized by these extreme reactions to tech’s power: ‘Break up the companies,’ ‘Abolish Section 230,’” Kovacevich said. “It’s a little like threatening a divorce because your partner leaves dirty laundry on the floor.”

Adam Conner, who founded Facebook’s Washington office and currently serves as vice president of technology policy at the Center for American Progress, said “the question is now do they change their strategy and adjust, or do they double down on the strategy that’s gotten them this far?”

For Monument Advocacy’s Mills, the strategy, at least until more specific antitrust policy proposals are unveiled, is clear: lean on the trade associations.

“There is strength in numbers. Use your associations, then maybe pick a one-off issue that is of particular interest to you,” Mills said. “Maybe that’s where you decide you want to play: something that’s smaller and more discrete.”