As White House Warns of Fourth Wave, 1 in 4 Adults Say They Know Someone Who’s Died of COVID-19 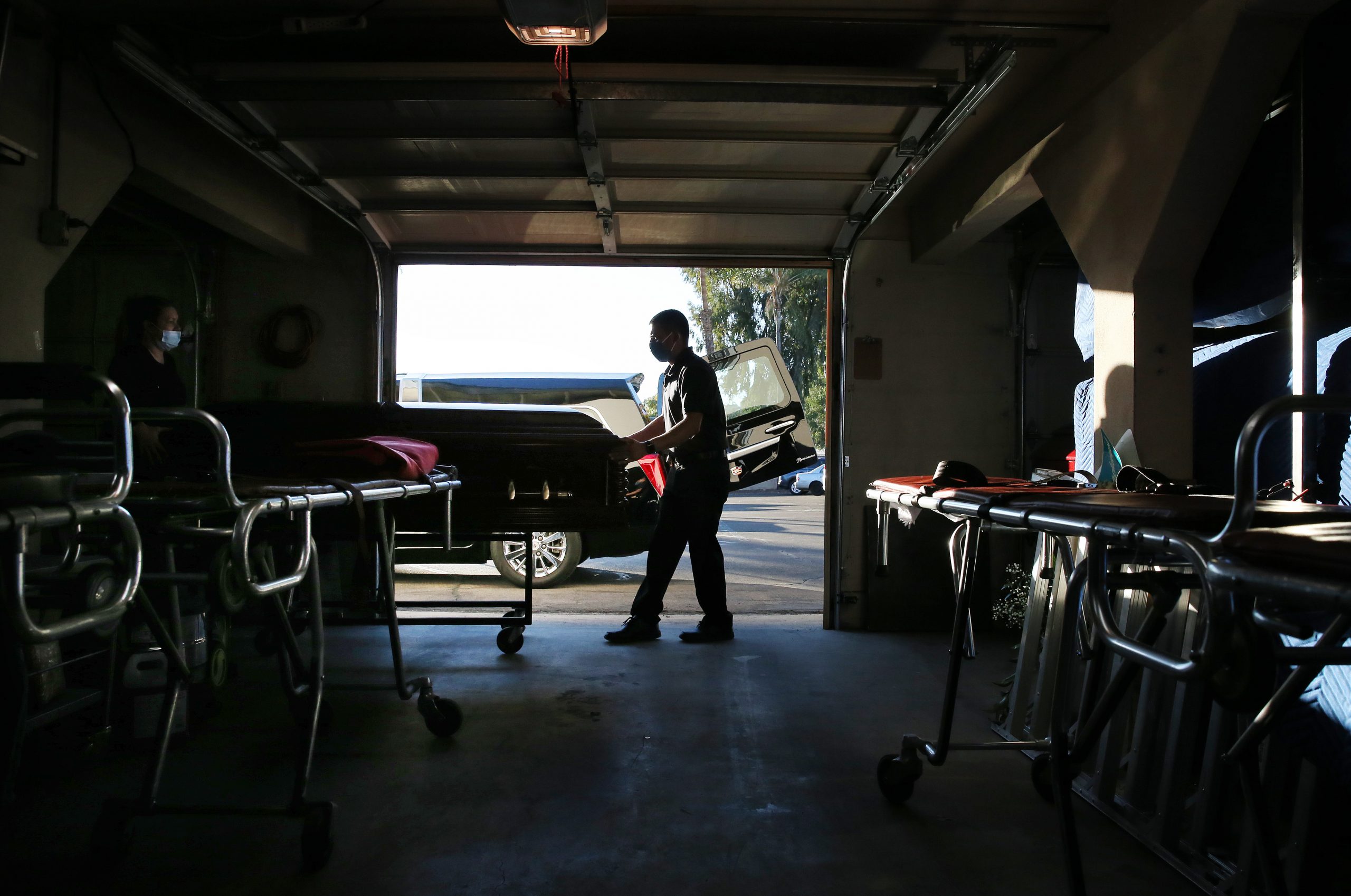 Funeral attendant Sam Deras helps wheel the casket of a person who died after contracting COVID-19 toward a hearse at East County Mortuary on Jan. 15, 2021, in El Cajon, Calif. One in 4 U.S. adults knows someone who’s died of COVID-19, according to new Morning Consult data. (Mario Tama/Getty Images)
By Gaby Galvin

One in 4 U.S. adults knows someone who’s died of COVID-19, according to new Morning Consult data that comes as the White House simultaneously cheers progress in the vaccination effort and warns that the country could be on the brink of a fourth wave of illness.

The share of people who know someone who’s died of COVID-19 has risen with the nation’s death toll, which now stands at about 547,000. In late 2020, 17 percent of adults said they personally knew someone who had died from the disease. Meanwhile, the share of people who say a family member or close friend has had COVID-19 rose to 43 percent, up from 30 percent in the mid-December poll.

Even so, about 1 in 2 adults said they’re very concerned about the coronavirus outbreak, a level that’s fallen since December and held relatively steady in more recent weeks. Adults are also less likely to say COVID-19 is a severe health risk in their local community (30 percent) than in their state (38 percent) or the United States (52 percent). 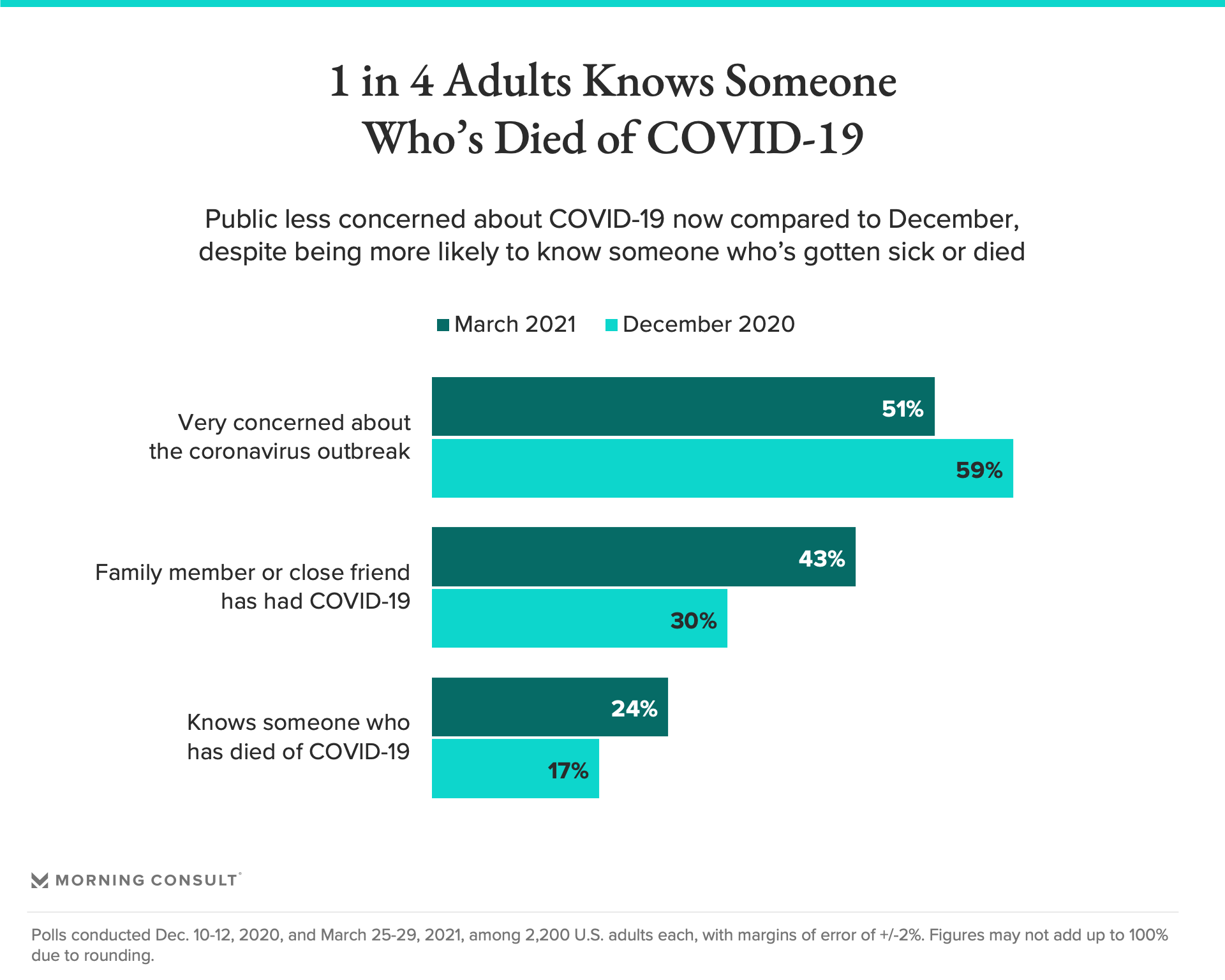 The findings come as the White House attempts to temper its messaging on the virus. Officials are projecting optimism as vaccinations ramp up and Americans eye a post-pandemic normal as soon as this summer. Yet they’re also urging caution in the months ahead as coronavirus variants, already spreading widely, threaten to undermine the country’s progress.

“With vaccines, there’s hope, which is a very good thing, to state the obvious,” President Joe Biden said Monday as he announced 90 percent of adults would be eligible for vaccination by April 19. “But people are letting up on precautions, which is a very bad thing.”

Hours before Biden’s comments, federal health officials cited data showing upticks in both new COVID-19 cases and hospitalizations that could signal the beginning of another surge. The seven-day average of new daily cases, which had been falling, is now hovering around 60,000.

“We do not have the luxury of inaction,” Dr. Rochelle Walensky, director of the Centers for Disease Control and Prevention, told reporters. “For the health of our country, we must work together now to prevent a fourth surge.”

The survey also indicates 59 percent of registered voters either strongly or somewhat approve of Biden’s handling of the pandemic, while 66 percent approve of the CDC’s response, with significant partisan divides for both. Biden’s net approval on COVID-19 has been relatively high since he assumed the White House in January, about one month after the vaccine rollout began.

Part of the public’s relative optimism could be due to the increased visibility of vaccines over the past two months. In the latest survey, 62 percent of adults said they know someone who’s been vaccinated, up from 44 percent at the end of January, shortly after Biden took office.

Similar shares of Democrats and Republicans said they knew someone who’s been vaccinated, though white adults were more likely than Black and Hispanic adults to know a vaccinated person, 65 percent to 52 percent and 50 percent, respectively.