The Stimulus-Fueled Economic Boom Is Upon Us, Strengthening U.S. Consumers’ Finances

In the few weeks following the American Rescue plan, Morning Consult economist John Leer finds that U.S. consumers, especially those in the middle-income bracket, have increased their savings and that employed workers are less worried about losing income 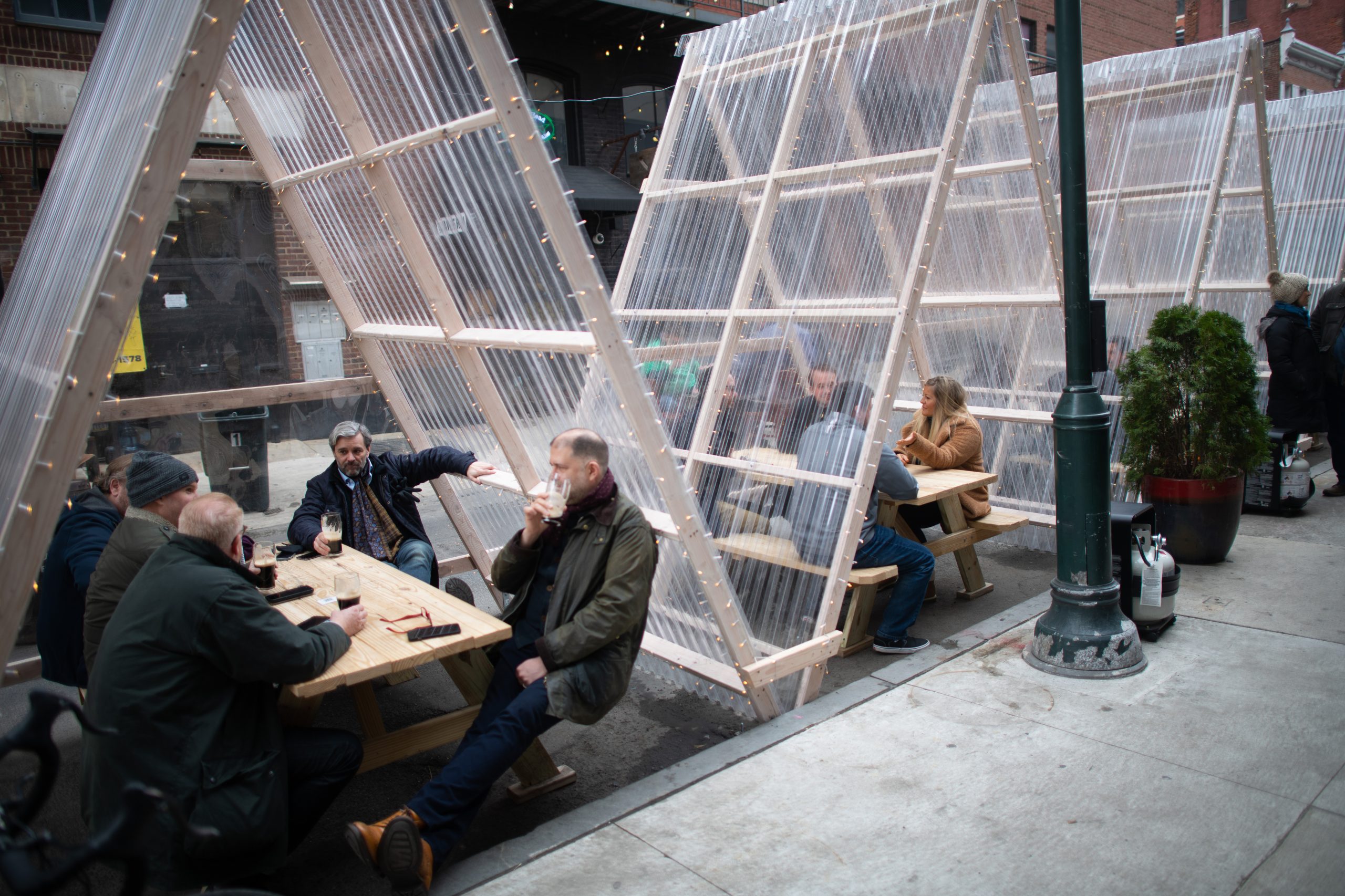 Patrons outside Fergie's Pub drinking in plexiglass enclosures on St. Patrick's Day in Philadelphia. U.S. consumption is likely to increase as key indicators confirmed that U.S. consumers are shoring up their finances. (Mark Makela/Getty Images)
By John Leer

U.S. consumer confidence significantly increased during the immediate aftermath of the American Rescue Plan being signed into law, as hundreds of millions of Americans received a third round of stimulus checks. The increase in consumer confidence provided the first indicator that U.S. consumers are ready to spend, but this analysis highlights the other key indicators necessary to understanding the U.S. economic recovery.

Over the past two weeks, additional data has confirmed the strength of U.S. consumers, highlighting which market segments are best-positioned to increase spending in the coming months.

Fewer adults on the brink of financial ruin

Stimulus checks combined with enhanced federal unemployment benefits provided many Americans with a much-needed boost to their savings. In March, 17 percent of adults lacked adequate savings to pay their basic expenses for a full month, down from 22 percent in February and 25 percent in November. The March value is the lowest reading since Morning Consult began tracking this metric May 2020. 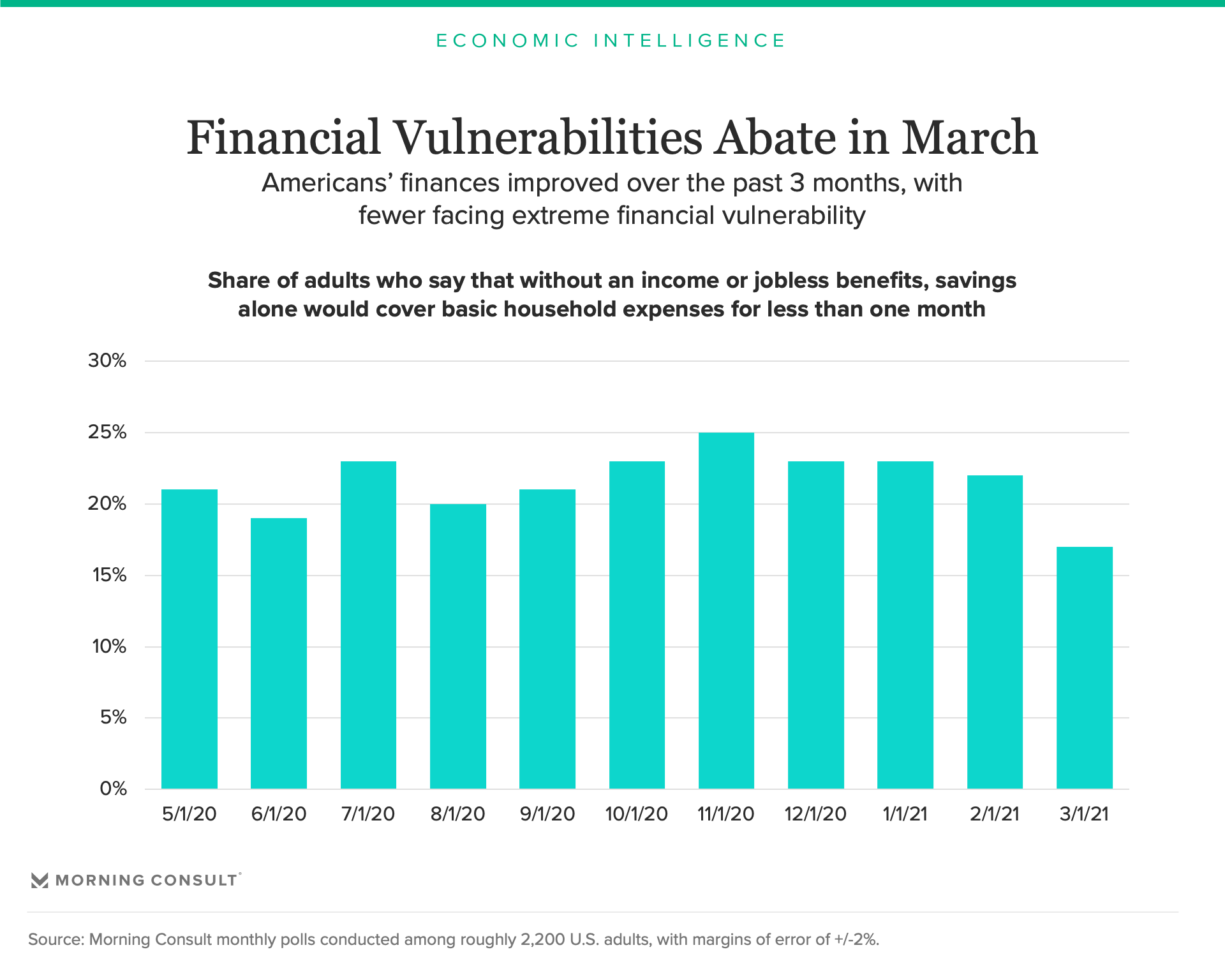 By quantifying the adequacy of savings relative to households’ basic expenses, this indicator tracks the share of financially vulnerable Americans. If these Americans were to lose their incomes from their jobs or unemployment benefits, they would not be able to pay their bills for a full month using just their savings. They would either have to rely on debt or default on their financial obligations.

Unlike measures of aggregate savings, this measure of households’ financial strength is not distorted by an increase in savings accruing to a relatively small share of the population. While aggregate personal savings have remained elevated following the passage of the CARES Act in March 2020, the share of financially vulnerable Americans consistently increased from August through November. The most recent reading indicates that stimulus checks from the American Rescue Plan provided financial assistance for those who needed it the most.

Due to these changes, consumer delinquencies and defaults are likely to remain at historically low levels for at least the next six months. By the end of the summer, many consumers will begin repaying mortgage and rent payments that are currently in forbearance. In the immediate future, these deferred liabilities will not harm consumer credit conditions.

The share of middle-income consumers (i.e., incomes between $50,000-$100,000) with savings capable of paying basic expenses for six months or more increased in March to 33 percent, the highest value recorded since Morning Consult began tracking this indicator in May 2020. Additionally, the gap between high-income (i.e., incomes above $100,000) and middle-income adults with at least six months’ of savings narrowed to its lowest level over the past 11 months.

These recent developments indicate that there is greater purchasing power among middle-income households than there has been since May 2020. This middle-income market segment is likely to account for a larger share of total consumer spending over the next three to six months than it did during the recovery last May and June. 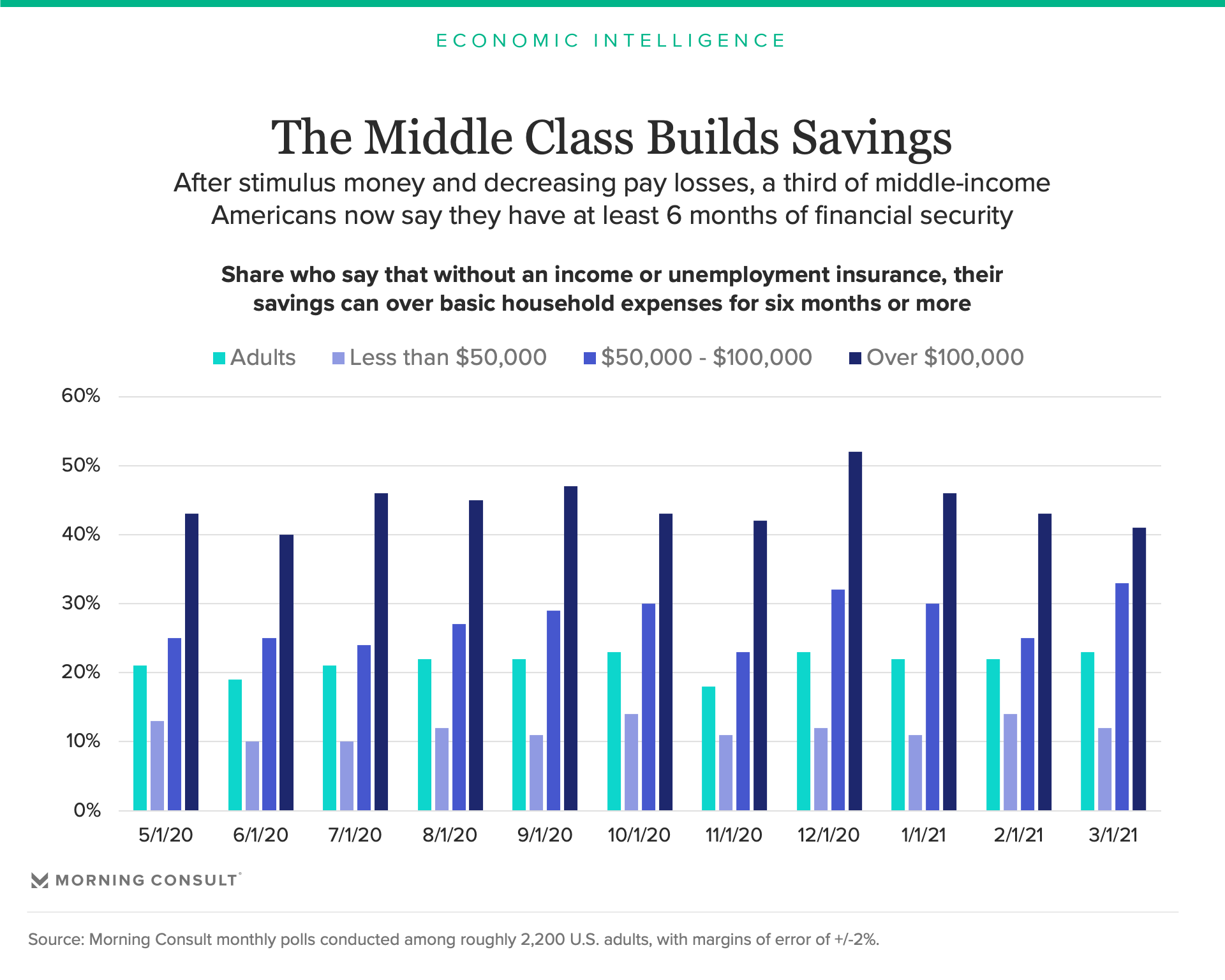 The impact of the American Rescue Plan on Americans’ savings will last longer than the impact from the CARES Act since labor market conditions are stronger now than they were in April and May of last year.

Job insecurity among employed workers decreased for the second consecutive month in March. Among workers who had a job in March, 15 percent expect to experience a loss of pay or income over the next four weeks, down from 17 percent in February and 22 percent in January. 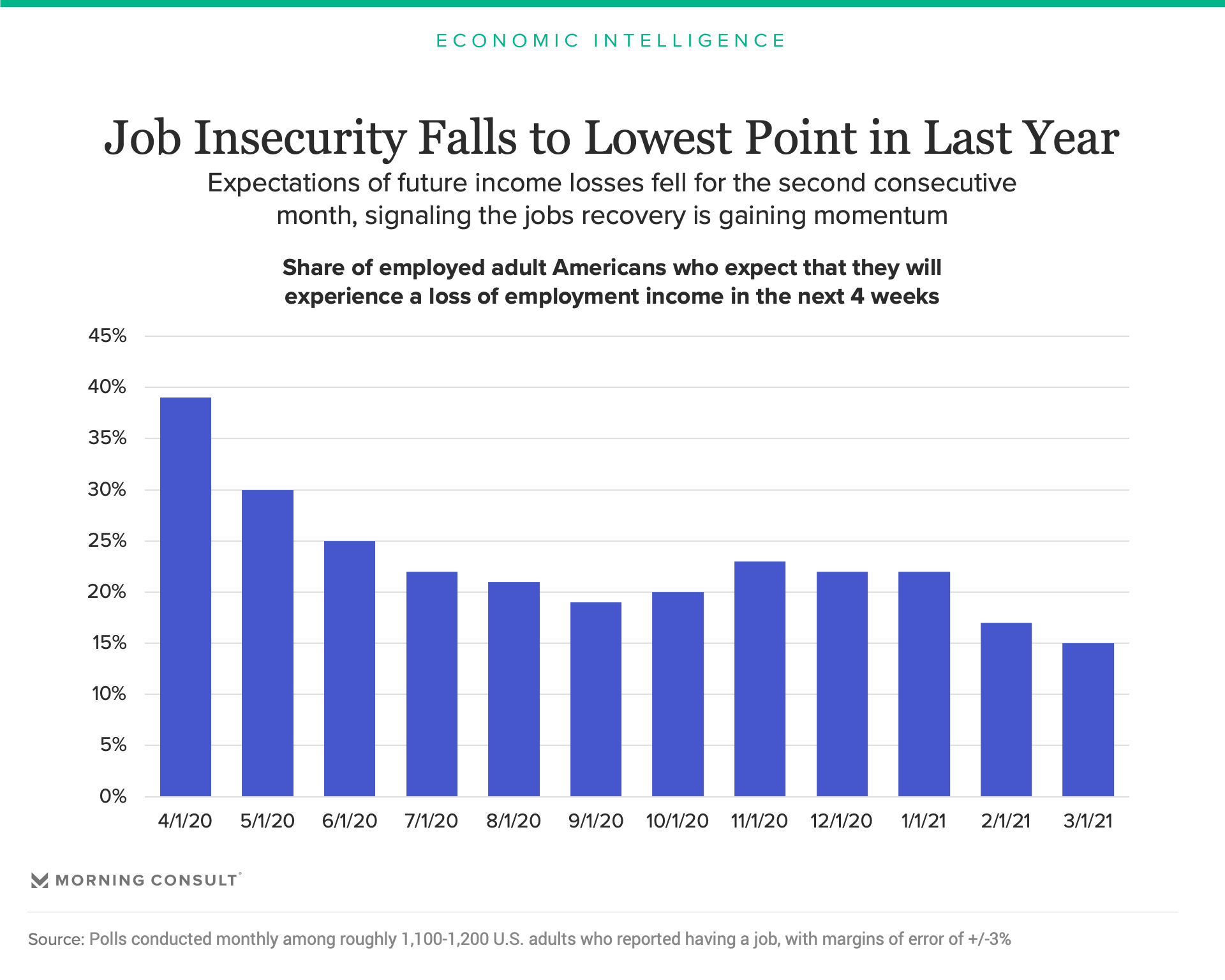 The dramatic improvement in workers’ optimism over the past three months provides the strongest indication that a robust employment recovery is gaining momentum. Workers live and breathe the day-to-day business conditions on the ground, and they sense that their employers are faring better than they did in January. That increase in demand for businesses’ products and services translates into a greater demand for labor, which is reflected in workers’ growing job security.

Taking a longer-term perspective, workers are significantly more confident now than they were a year ago. In April 2020, 39 percent of employed workers expected to experience a loss of pay or income over the next four weeks. That number gradually fell until October, when the benefits of fiscal stimulus expired and the United States experienced a dramatic increase in the number of new COVID-19 cases.

Low and falling levels of job insecurity not only bode well for the jobs recovery, they also speak to the issue of savings being converted into consumption. As long as workers retain their existing sources of income from employers, they will not need to hold onto as much of their savings, allowing them to increase consumption.