After a Year in Washington, Food Delivery Apps Strategize for Battles Ahead 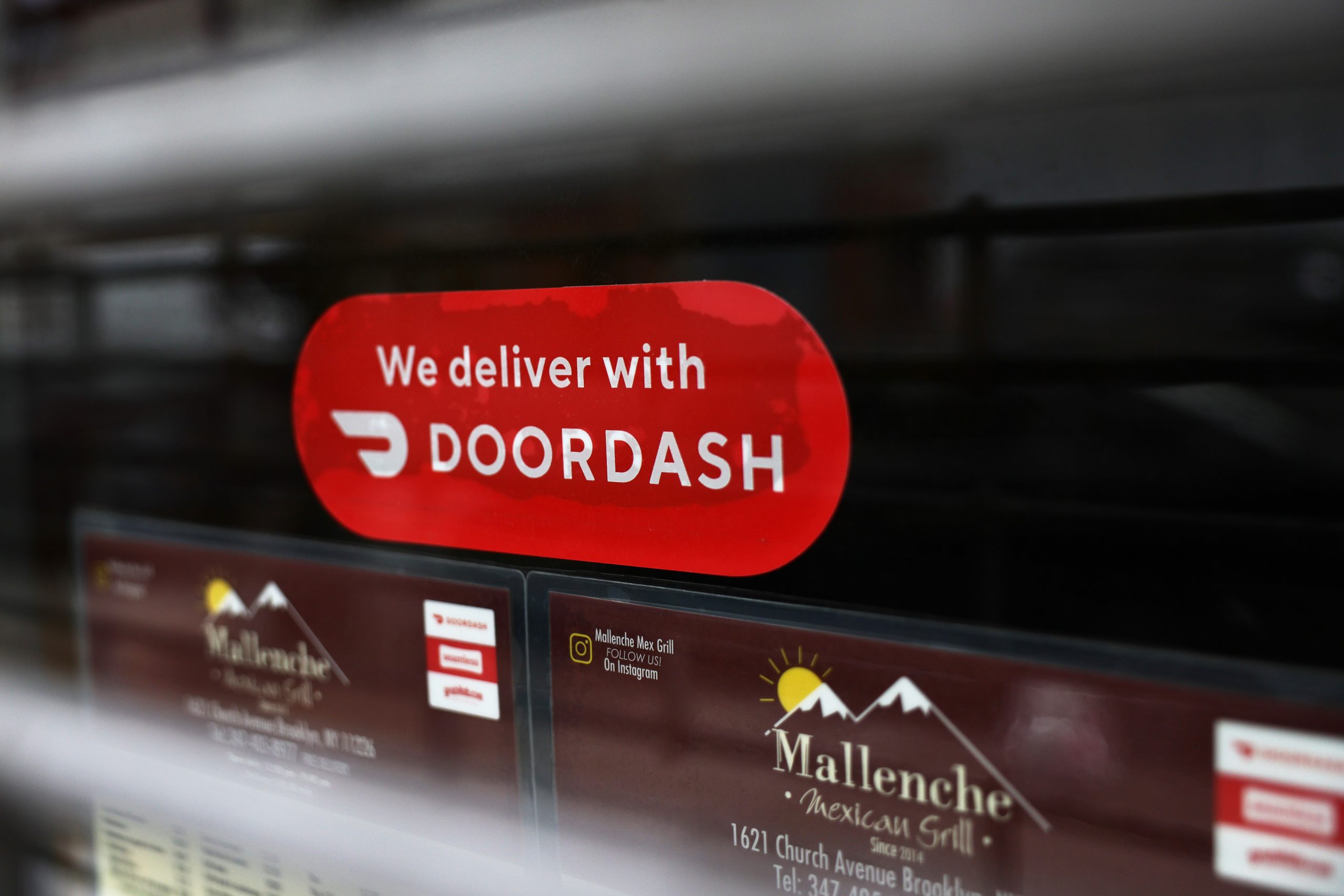 A Doordash sticker is seen on a window at Mallenche Mexican Grill in the Flatbush neighborhood of Brooklyn on Dec. 04, 2020, in New York City. (Michael M. Santiago/Getty Images)
By Sam Sabin

In the past year, as restaurants closed their doors to diners during the pandemic and became more reliant on the delivery apps that used to provide a sliver of their annual sales, Silicon Valley’s venture capital-backed food delivery darlings established roots in Washington.

In April 2020, DoorDash Inc. hired its first outside lobbying firm and then brought on a second and third firm before the end of the year, per congressional lobbying disclosures. Postmates Inc., prior to its December 2020 acquisition by Uber Technologies Inc., ratcheted up its lobbying efforts by hiring a second firm for the first time in three years and upping its typical budget of $30,000 per quarter to $110,000 that was spent in the last quarter of 2020. And GrubHub Inc. also brought on its first outside lobbying firm, The Glover Park Group, at the end of 2020.

Even Max Rettig, the global head of public policy at DoorDash, acknowledged in an interview that his company “didn’t have much of a presence really anywhere in the policy sphere until the fairly recent past.”

But as the light at the end of the pandemic tunnel nears, it’s unlikely that the policy arms at these companies will shy away from their growing lobbying apparatuses once restaurant dining returns to normal, with at least two companies either saying they plan to double down on their existing government affairs strategies or growing their Washington-based teams in the next few months.

And with anti-monopoly groups lobbying the Federal Trade Commission to investigate the conduct of the major Silicon Valley-based food apps, the four companies coming under fire — UberEats, Postmates, GrubHub and DoorDash — are faced with a quandary: How do you continue to grow your policy arm as scrutiny ratchets up?

When the pandemic began, lawmakers had already started sounding the alarm about the companies’ power. Sen. Elizabeth Warren (D-Mass.) sent a letter to DoorDash, Uber, GrubHub and grocery delivery service Instacart demanding they start classifying their contract delivery drivers as full-time employees and provide them with essential employment benefits.

And when Uber proposed an acquisition of GrubHub in May, several Democrats, including Sens. Amy Klobuchar (D-Minn.) and Richard Blumenthal (D-Conn.), warned in a letter to the FTC and the Department of Justice that the merger would raise “serious competition issues” in many markets around the country.

Yet so far, Rettig said the company has received “by and large” a positive reception from Washington, despite Democrats taking shots at gig work-reliant companies like DoorDash. To combat the company’s reception, Rettig has turned to an all-too-familiar tool for companies accused of anti-competitive behavior: educating lawmakers.

“People often have preconceived notions that don’t actually match up to reality,” Rettig said. “There are a few statistics that we share in meetings that I think are surprising to folks and often prompt them to think about things in a different way.” Those stats include that 90 percent of DoorDash delivery drivers work fewer than 10 hours per week and more than three-quarters of workers have another job or are students, he said.

In sharing those statistics, Rettig and his team aren’t hoping to “preserve the status quo.” Instead, they’ve been pushing for legislation that would enable portable benefits for its contract workers, much like other gig worker-reliant companies.

For the better part of the past year, DoorDash and other food delivery companies have been putting most of their influence behind the $28.6 billion restaurant revitalization fund that was included in last month’s stimulus package.

Grant Klinzman, a GrubHub spokesman, said in an email that the company has spent most of its time in Washington so far either introducing themselves to members of Congress or pushing for the new restaurant relief funding. However, Klinzman pointed to a job post listed last week for a new federal government relations director position, indicating that their policy team is only just getting started.

But efforts to grow their influence in Washington could come to a halt if anti-monopoly advocates have anything to say about it.

“There are so many reasons that the relationship between restaurants and these delivery apps is bad,” said Moe Tkacik, a senior fellow at the anti-monopoly group American Economic Liberties Project.

In August, the American Sustainable Business Council, the American Economic Liberties Project and the Institute for Local Self-Reliance launched a campaign, titled “Protect Our Restaurants,” that called on the FTC to investigate the four food delivery app companies and their treatment of restaurants.

American Economic Liberties Project spokesperson Robyn Shapiro said each commissioner appeared “very engaged and concerned by the research and testimony we presented.” Some also asked for follow-up materials, she added.

An FTC spokeswoman declined to comment on the meetings and whether the agency is looking into a possible probe, which is standard for the agency.

California passed a law in September barring companies from arranging a delivery from a restaurant without the restaurant’s consent following complaints of companies scraping menus and making them available on their service without permission. Washington, D.C., passed a similar law in February.

“We’ve lived the past few years in this artificially sculpted world where we expect that Amazon Prime means that we can get all of our deliveries for free,” said Kennedy Smith, senior researcher with the Institute for Local Self-Reliance’s independent business initiative. “But we’re forgetting that there are real tangible costs attached to things like delivery.”

No matter what side they’re on, each party seems to have the same tool in their advocacy kits: worker and restaurant owner stories.

The “Protect Our Restaurants” campaign has been organizing video meetings each month for the past six months with local restaurant owners to strategize, Smith said, and at each meeting the number of owners on the call grows.

Uber, Postmates and DoorDash are among the companies funding the App-Based Work Alliance, a national group that advocates on behalf of workers by sharing their stories. While the group formed in November, spokesperson Whitney Mitchell Brennan said in a statement that the alliance is pushing for “modern labor laws” that balance workers’ flexible schedules with the benefits they need.

In the face of criticism, Rettig said he expects proposals like delivery rate caps to be temporary in most jurisdictions and that DoorDash is proud of how it’s been able to help restaurants during the pandemic.

“We are always going to listen to restaurants,” he said, “And the vast majority say that third-party delivery is good for the restaurant industry and that they’ve actually been able to increase their profits during the pandemic” because of partnerships with companies like DoorDash.