60% of GOP adults lack trust in the U.S. electoral system – up by double digits since Biden’s November victory 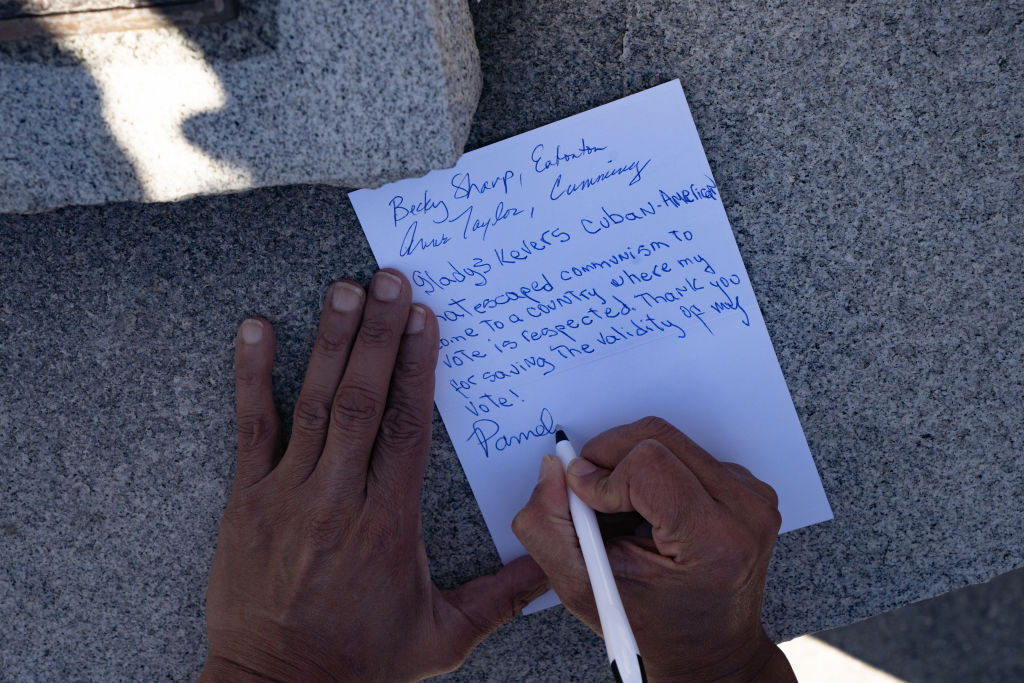 Demonstrators write thank you notes to Republican representatives outside of the Georgia Capitol in Atlanta on March 3 in support of the state's new voting law. While Republicans in state legislatures across the country have looked to restrict voting in recent months, new polling shows GOP voter trust in the U.S. electoral system remains low. (Megan Varner/Getty Images)
By Eli Yokley

President Joe Biden’s victory in November elicited a sharp drop in election confidence among Republicans that, nearly five months later, has not yet recovered.

According to Morning Consult’s tracking of U.S. adults’ trust in a number of American institutions, faith in the country’s electoral system – largely bolstered by Republicans in advance of Nov. 3 – continues to rest on the backs of Democrats in the wake of former President Donald Trump’s loss, with self-identified independents almost evenly split and Republicans continuing to sour even as state GOP leaders advance restrictive measures meant to shore up their base’s confidence. 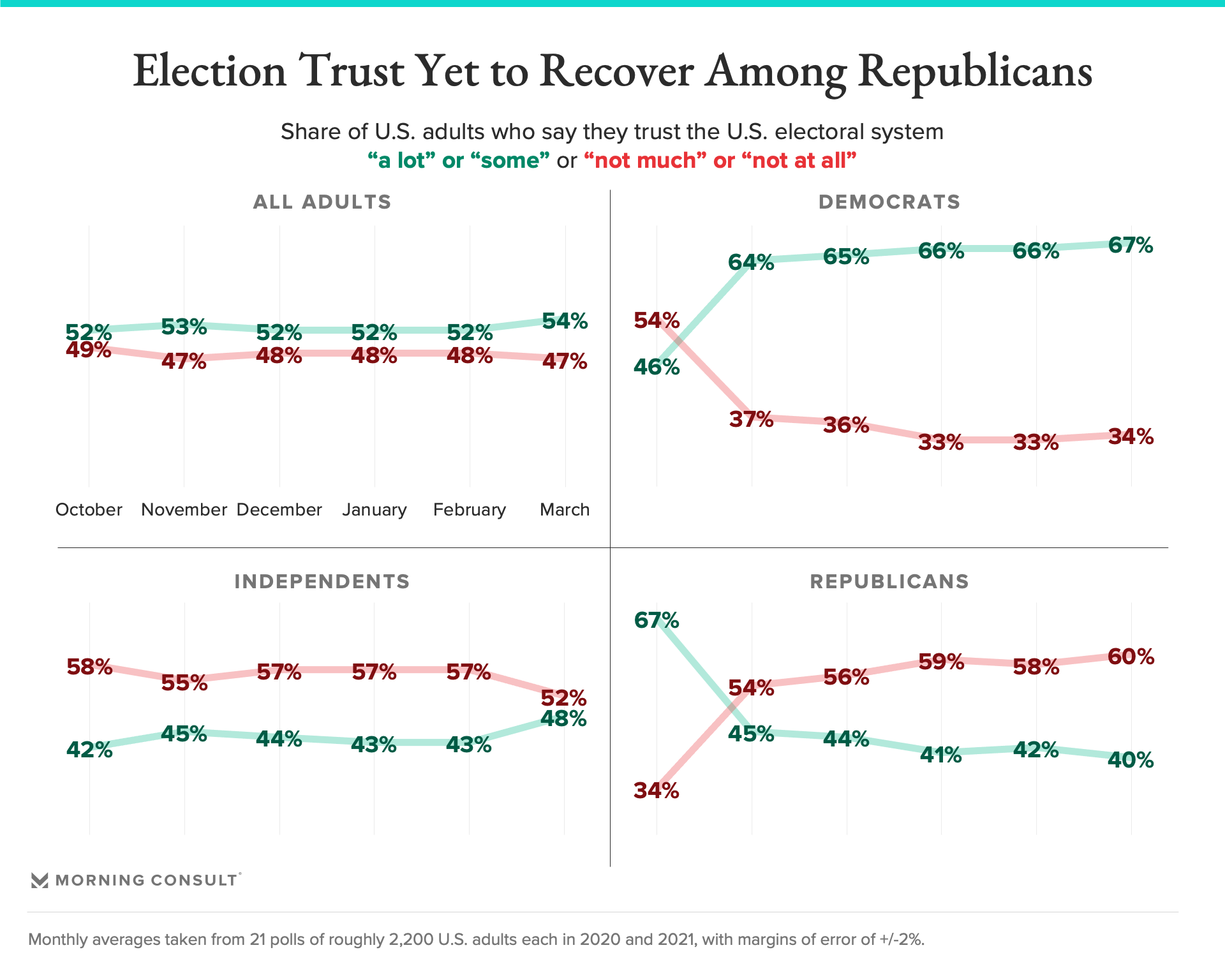 Over the same time period, the share of Democrats and independents who said they at least somewhat trust the elections system has grown 3 points, to 67 percent and 48 percent, respectively, though 52 percent of independents still express at least some doubt.

The movement among Republicans was even more drastic when compared to polling conducted since before the November election – part of a larger decline in sentiment among the group about nearly all of the 19 institutions tested in the surveys since Biden’s victory. 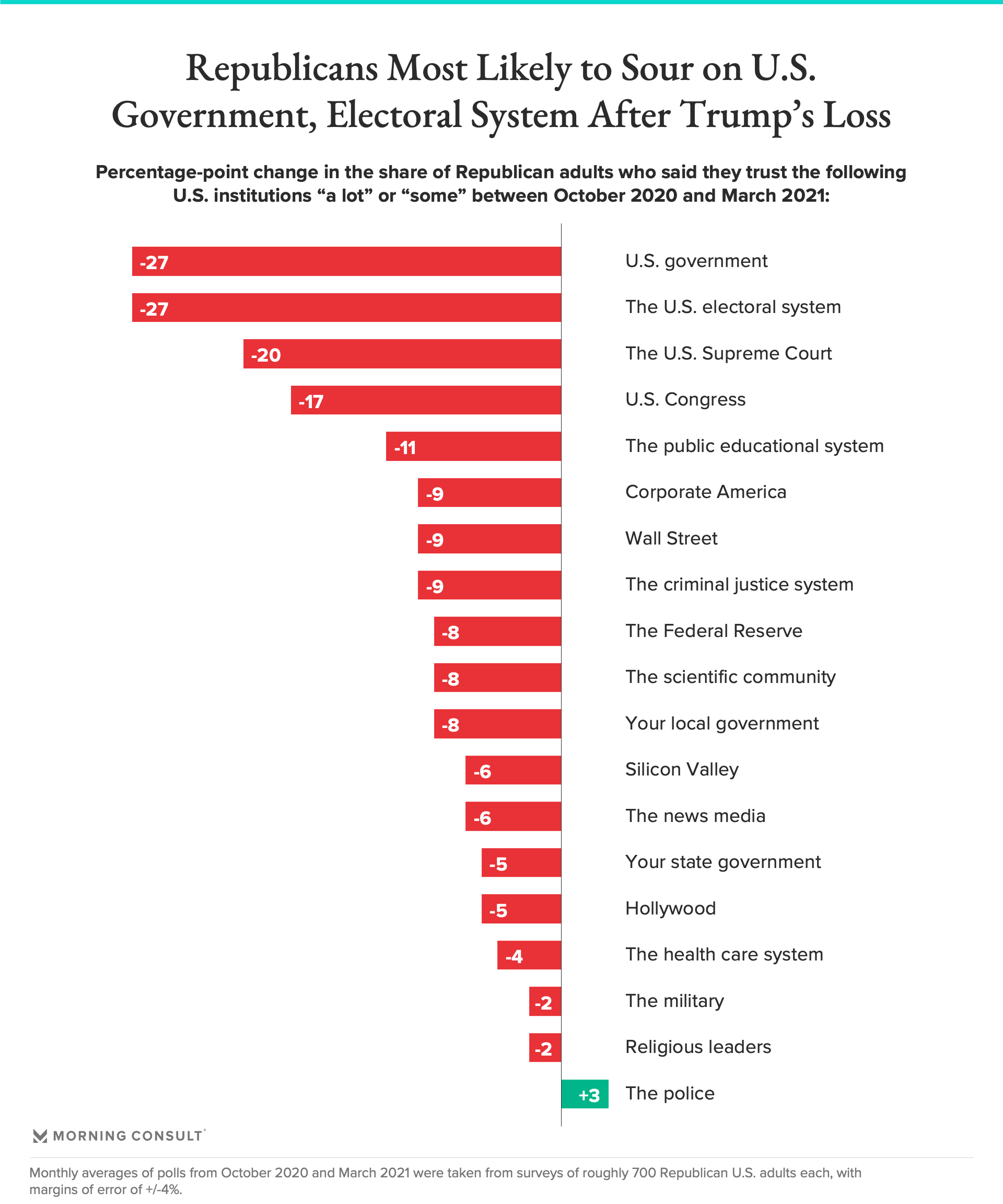 Compared with the pre-election polling, the share of Republicans expressing confidence in the U.S. electoral system has dropped 27 points – matching the decline in sentiment about the U.S. government itself – following a monthslong campaign by the now-former president to erode confidence in the 2020 election results after Trump’s narrow losses in Wisconsin, Pennsylvania, Arizona and Georgia helped hand Biden the presidency.

Republicans strategists have said they are concerned that Trump’s claims of a stolen election have already had a dampening effect on GOP voter enthusiasm, pointing to the January Georgia Senate runoff elections that handed Democrats full control of Washington. Those fears appear to have prompted attempts from state officials to change voting and election rules as part of a larger state-by-state campaign to shore up GOP trust in elections that has prompted Democrats to cry foul.

A recent Morning Consult/Politico poll found 34 percent of voters nationwide reported having seen, read or heard “a lot” about the new restrictions in Georgia, which have been elevated by Democrats, who argue the law is designed to limit the participation of Black voters and are pushing their own federal legislation to expand voting access.

Among Republicans, 22 percent reported hearing “a lot” about the measure Gov. Brian Kemp (R-Ga.) signed into law last week, placing it in the bottom half of more than 100 news items tested so far this year. The relative lack of resonance could signal that the latest moves — which the GOP has cast as part of an effort to strengthen election integrity after its losses in the last campaign — are not yet breaking through to its base.