While Many Voters Are Following the Chauvin Murder Trial, Those Who Aren’t Have Very Different Reasons for Their Decision 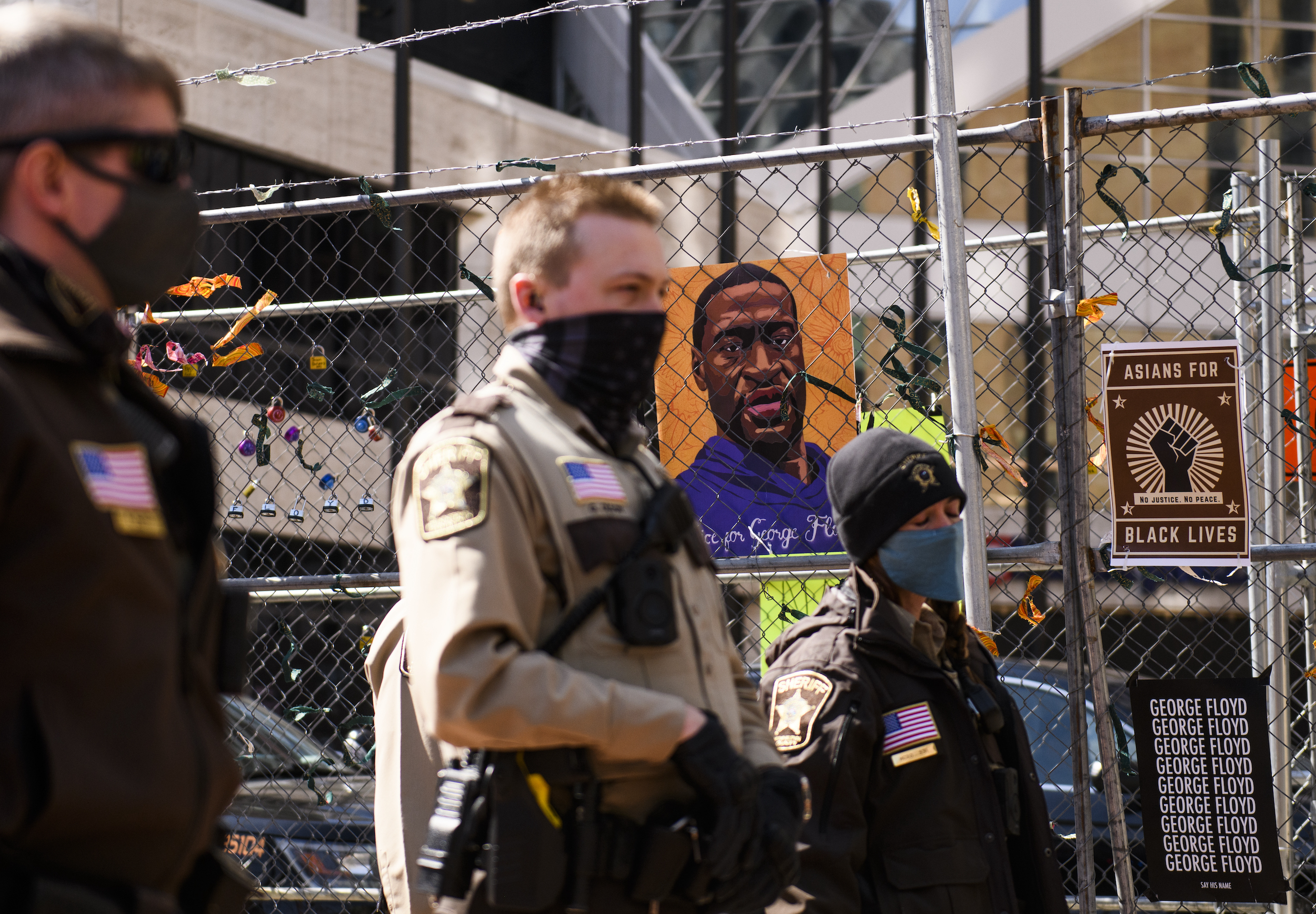 Law enforcement stands guard as crews remove artwork from temporary fencing outside the Hennepin County Government Center on April 2 in Minneapolis. New polling shows nearly half of voters have heard "a lot" about the trial of Derek Chauvin, the former police officer who is accused of killing George Floyd last year, making it one of the top news stories of 2021 so far. (Stephen Maturen/Getty Images)
By Eli Yokley

The murder trial of former Minneapolis police officer Derek Chauvin is being followed more closely than many other stories in the news so far this year, boosted by heavy media coverage during its first week.

Still, the latest Morning Consult/Politico poll found that the majority of voters are not closely tracking arguments over whether Chauvin is guilty of killing George Floyd in Minnesota last year, with wide partisan gaps emerging in their reasoning.

The April 2-4 survey found 44 percent of voters said they had seen, read or heard “a lot” about the Chauvin trial, placing it among the top 20 of 109 news events tested in polls so far this year, but behind other major stories such as the widely covered Senate impeachment trial of Donald Trump or the Jan. 6 attack on Capitol Hill. 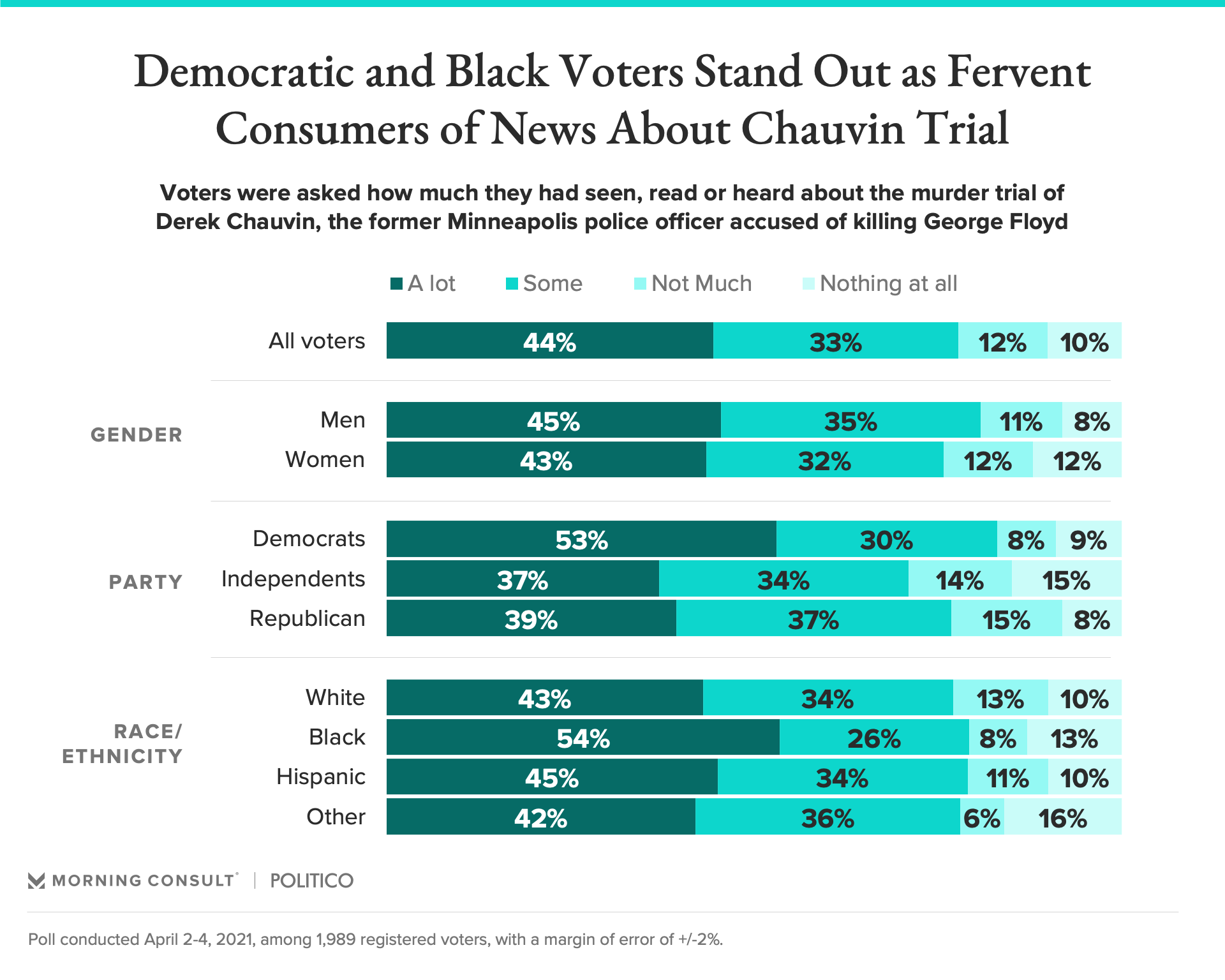 Democrats were 14 percentage points more likely to report hearing a lot about the trial than Republican voters (53 percent to 39 percent). CNN and MSNBC each aired more than 21 hours of live trial proceedings through April 5, according to the group Media Matters for America, while Fox News, a conservative favorite, only showed the opening arguments, or roughly 90 minutes of the event, live. Black voters were 11 points more likely than white voters to say they heard a lot about the trial (54 percent to 43 percent), making it one of the most captivating news events for Black voters so far this year.

As arguments continue into their second week and Americans await a verdict in the case that prompted massive Black Lives Matter demonstrations in dozens of American towns and cities last summer, the majority of voters – driven largely by Republicans – reported hearing “some” or less about the trial.

Among the 56 percent not who are not glued to the trial, the overall public is most likely to cite two things: a lack of interest or emotional pain regarding the events of Floyd’s death on May 25. The reasons voters are most likely to give for not paying attention fall strongly along partisan lines. 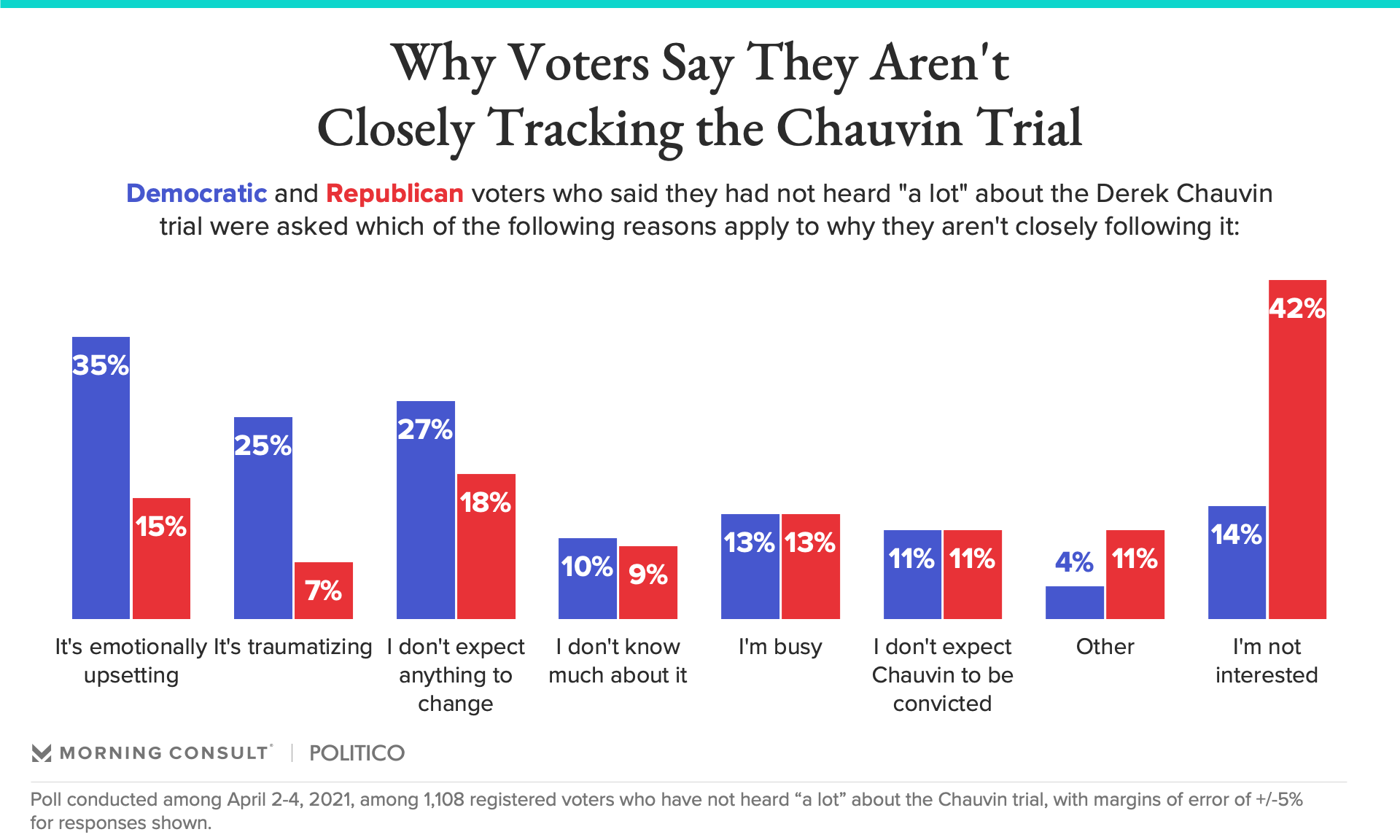 Among Republican voters, 42 percent said they are not paying a lot of attention to the trial because they are not interested in it – 28 points higher than the share of Democrats who said the same. Meanwhile, Democratic voters were 20 points more likely than Republicans to cite emotional distress over the trial, which has featured graphic and gripping video and testimony of the moments that preceded Floyd’s death.

Responses among Black voters roughly mirrored those from Democrats: About a third who are not paying close attention to the trial cited emotional trauma and their expectation that the trial won’t change anything.

Roughly 1 in 10 Republicans, Democrats, Black voters and members of the overall electorate said they weren’t tracking the trial because they don’t know much about it, are personally busy or don’t expect Chauvin to be convicted.