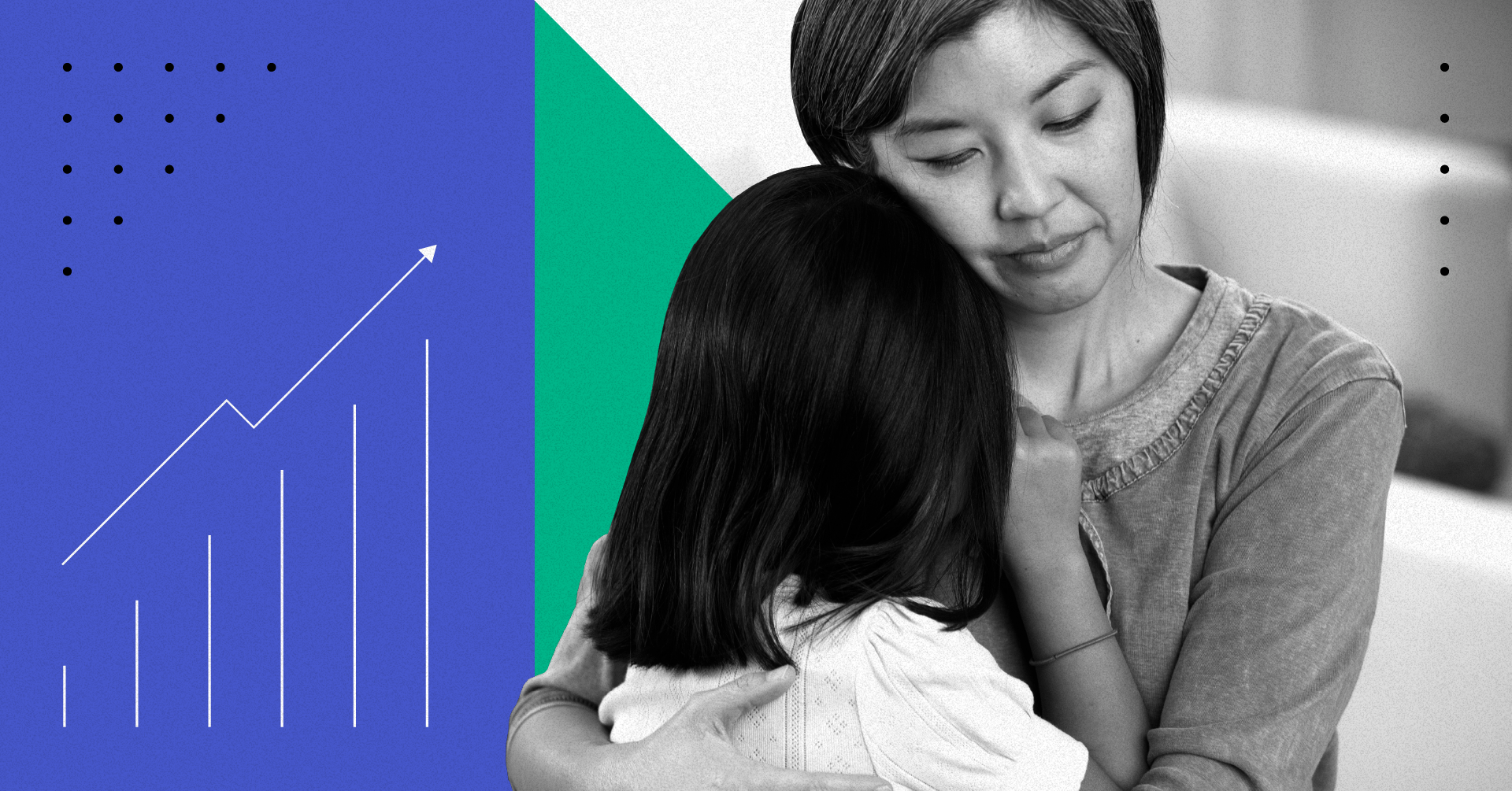 This piece is part of a Morning Consult mini-series highlighting the experiences of Asian adults living in the United States. On Thursday, we’ll have additional stories on the increased levels of online harassment Asian adults have experienced during the pandemic, and how reports of violence and racism over the past year have impacted the mental health of Asian Americans.

The March 16 shooting spree at three Atlanta-area massage parlors that claimed the lives of six women of Asian descent brutally punctuated a year of rising anti-Asian sentiment in the United States that coincided with the proliferation of the COVID-19 pandemic.

And when asked in a new Morning Consult survey of Asian adults in the United States who is responsible for the uptick in discrimination against Asian Americans, most respondents laid the blame at former President Donald Trump’s door. 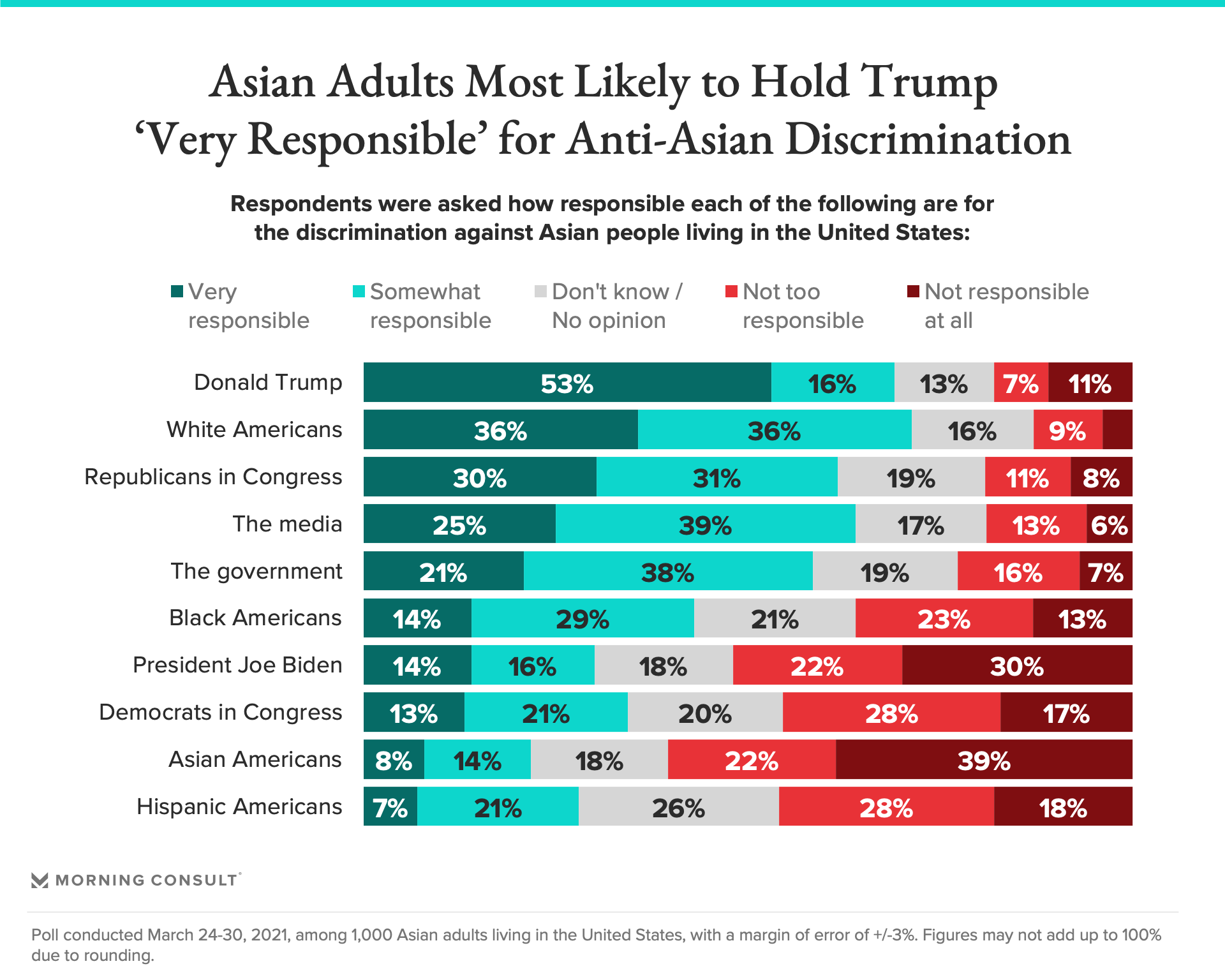 Fifty-three percent of respondents in the March 24-30 survey of 1,000 Asian adults said Trump is “very responsible” for discrimination against Asian people living in the country, followed by 36 percent and 30 percent who said white Americans and congressional Republicans, respectively. Responses among Asian adults have a margin of error of 3 percentage points.

The March tragedy prompted another chorus of condemnation for Trump by Asian American leaders and activists, who say his branding of the contagion as the “China virus,” a term that would be embraced by Republican officials and conservative media, triggered a wave of racism against the country’s Asian Americans.

Katie Nguyen Kalvoda, a board member on the AAPI Victory Fund, a super PAC focused on mobilizing Asian voters, is one of those leaders, but she was quick to underline that the 45th president didn’t invent the anti-Asian racism that has affected Asian adults living in the United States today.

Trump’s rhetoric “made it permissible for others to use Asian Americans as a scapegoat,” Kalvoda said. “What people are seeing is the wide acceptance of this audacity to hate.”

Hate crimes toward Asians in the United States increased 149 percent in 2020, from 49 crimes in 2019 to 122 incidents, according to the Center for the Study of Hate and Extremism, even as the nonpartisan research and policy center found hate crimes overall dropped by 7 percent.

Research also shows that the actual number of anti-Asian hate crimes could be even higher: Stop AAPI Hate logged 3,795 incidents in its reporting center between March 19, 2020, and Feb. 28, 2021. The nonprofit also found that women were 2.3 times more likely than men to report hate incidents. 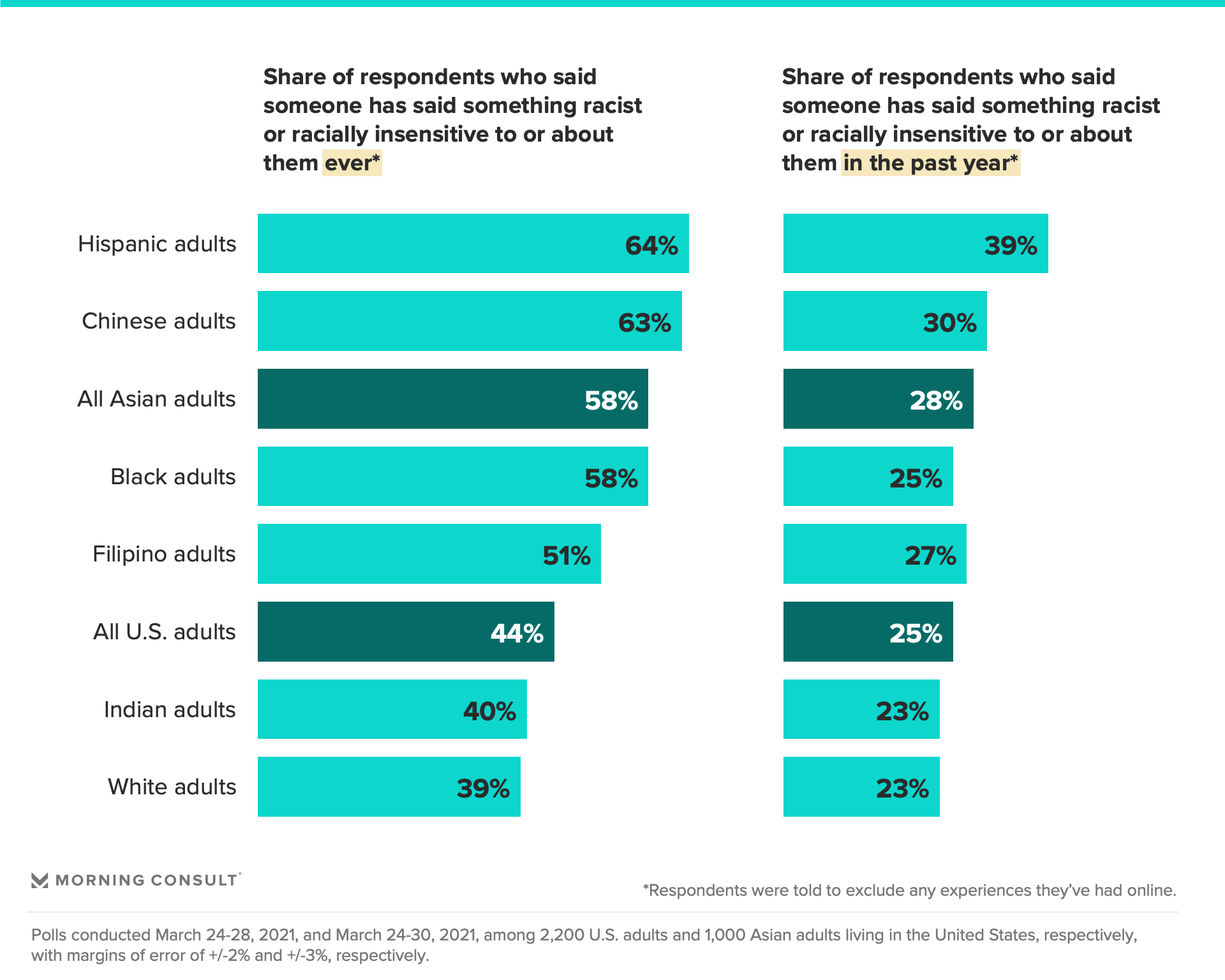 Fifty-eight percent of Asian adults living in the United States said they have experienced racism firsthand in their lives, according to the Morning Consult survey, while 28 percent said they’ve had someone say something racist or racially insensitive to or about them in the past year.

Asian Americans have “always dealt with being the other” in the United States, Kalvoda said, with the World War II-era internment of Japanese Americans and residents providing the starkest example. Anti-Asian sentiment is also one reason for the geographic segregation of many Asian communities in America, Kalvoda said: To ward off discrimination, Asian immigrants found strength in numbers and concentration.

As president, Trump regularly called the novel coronavirus, which originated in Wuhan, China, the “China virus” or the “Chinese virus,” also at times referring to it as the “kung flu.” Critics of the former commander in chief say Trump used this xenophobic framing in an attempt to shift blame of his own administrations’ handling of the COVID-19 pandemic. Trump regularly downplayed the severity of the virus as its death toll mounted, driving down his approval rating numbers down ahead of the election.

A Morning Consult survey that gauged satisfaction with his handling of the crisis in January found 59 percent of U.S. adults disapproved of his performance on the matter, the highest figure among the other leaders and institutions listed. The former president did not respond to a request for comment on the findings from the poll of Asian adults. 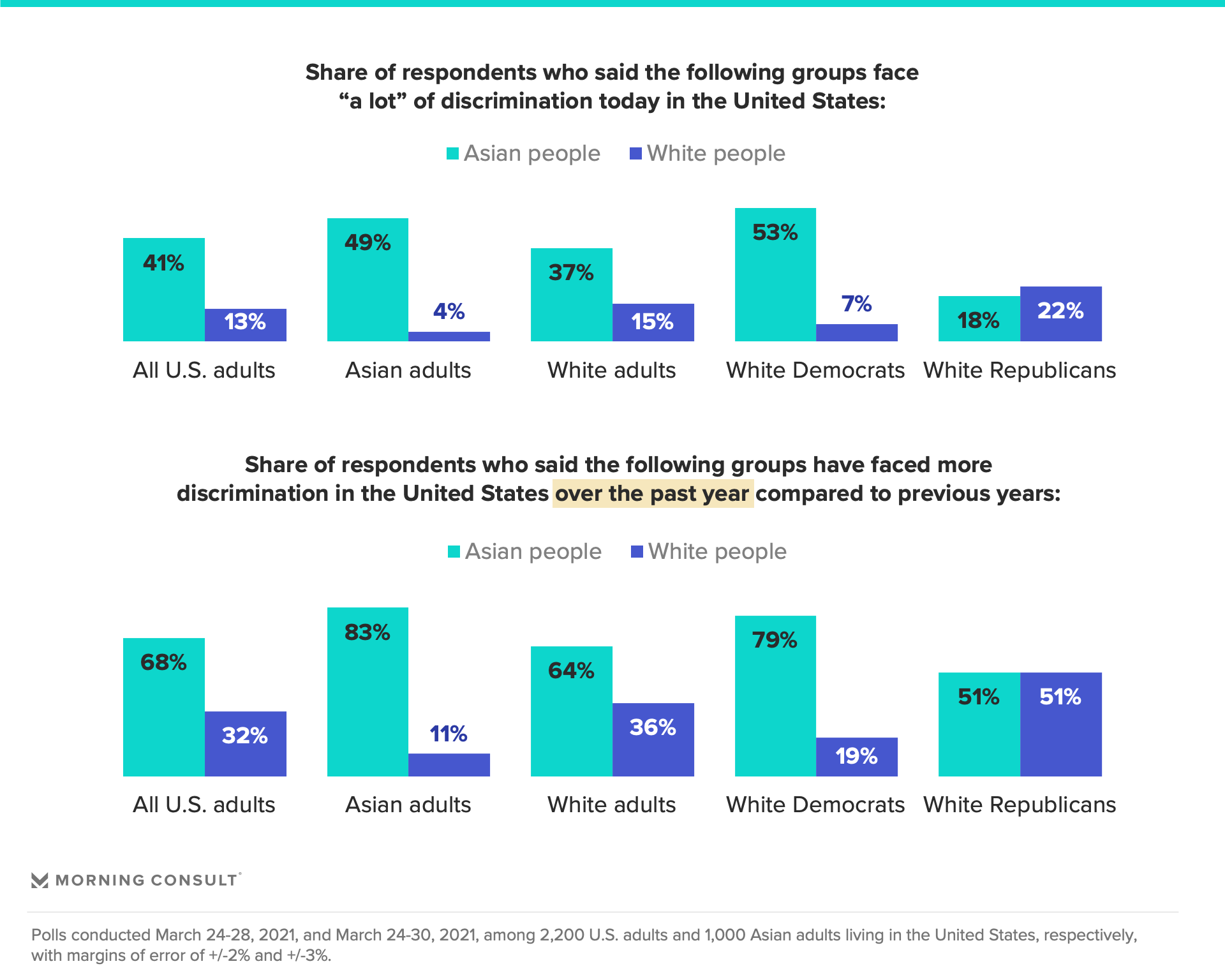 In labeling the novel coronavirus in this way, Trump was tapping into the same pool of racial resentment that feeds how his predominantly white base sees the country today. While another March 24-28 survey showed white adults were generally more likely to say Asian individuals experience “a lot” of racism today than they were to say the same about white people, attitudes sharply diverged along party lines.

White Republicans were about as likely to say white people face “a lot” of discrimination today as they were to say the same about Asian adults. By comparison, white Democrats were roughly eight times more likely to say that Asian communities face discrimination compared to white communities. The findings help explain the reluctance in the mostly white GOP to recognize the notion of white privilege. 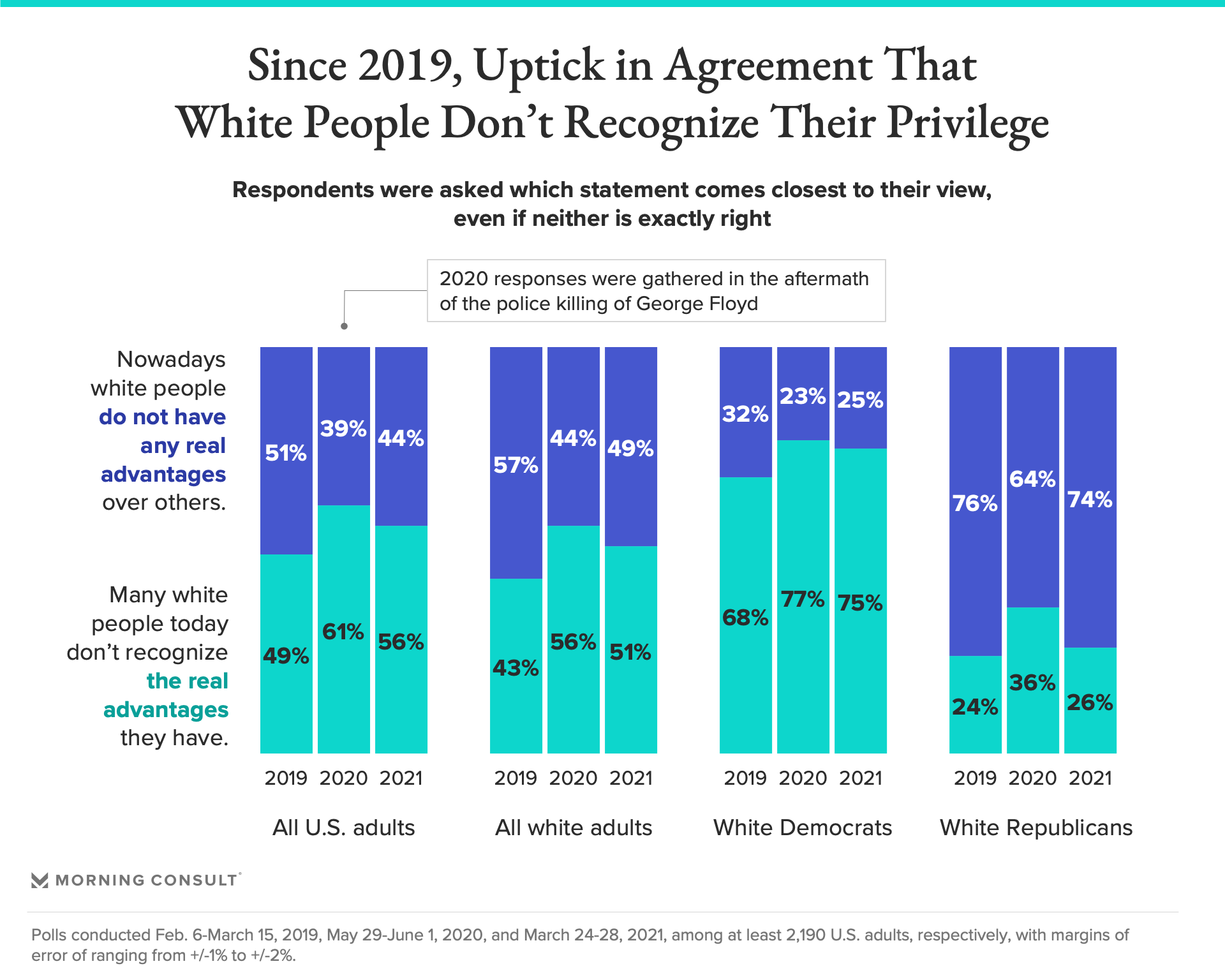 To be sure, the racial reckonings that have rocked the country over the past year have made some white Americans more aware of the racial privilege they have, although awareness appears to rise when race-related violence and killings dominate the headlines.

Forty-three percent of all white adults in a 2019 poll agreed that “many white people today don’t recognize the real advantages they have,” a figure that rose to 56 percent in 2020 survey conducted after George Floyd was killed by police on May 25 That number has slipped to 51 percent, still outside the margin of error from the 2019 marker.