Republicans split on raising corporate taxes to fund the plan, with 42% support and 47% opposed 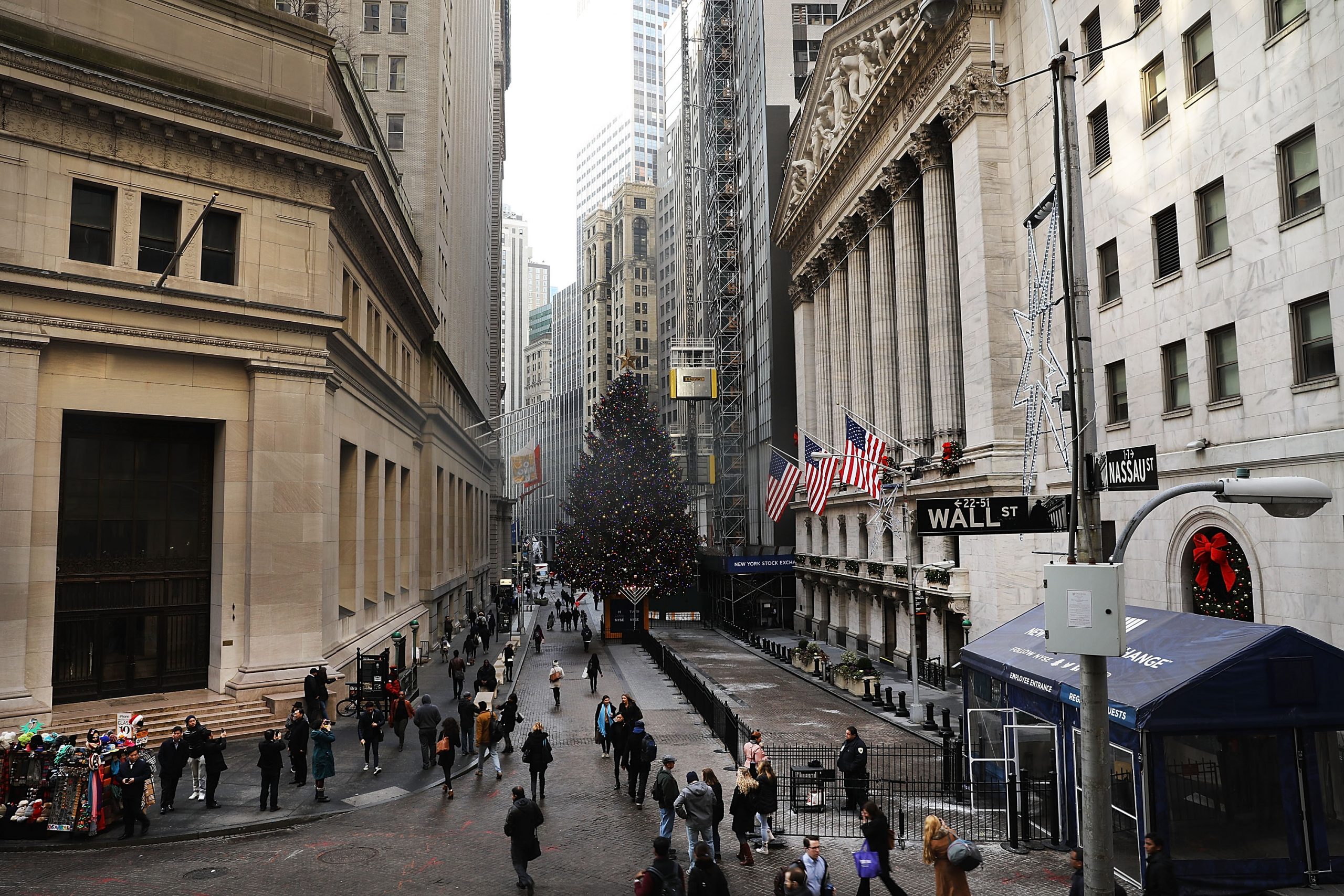 While raising the corporate tax rate to 28 percent from 21 percent will likely be heavily debated among policymakers in the coming weeks, a new Morning Consult/Politico poll finds that voters are mostly fine with increasing taxes on corporations to fund infrastructure improvements. 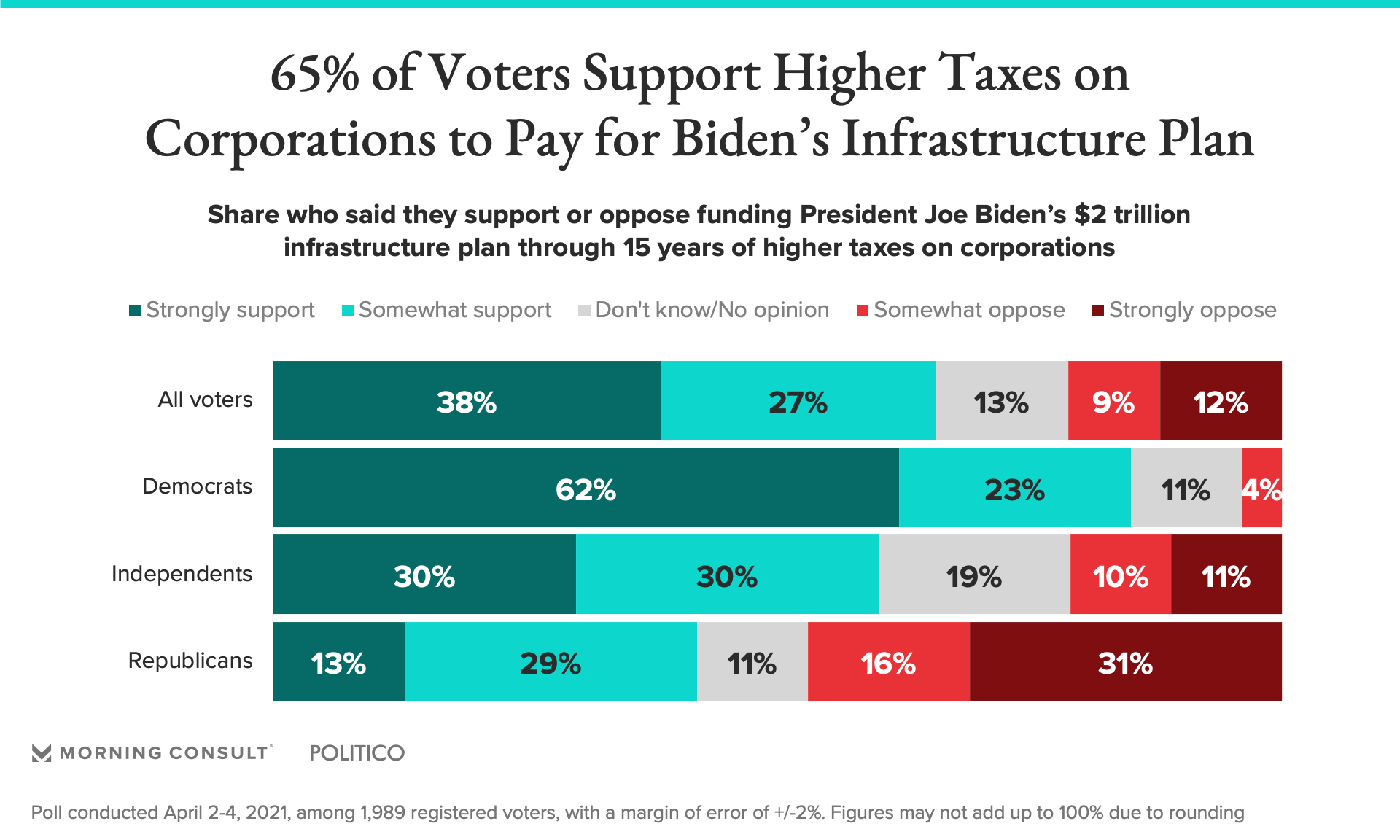 Sixty-five percent of registered voters said they strongly or somewhat support funding Biden’s infrastructure plan through 15 years of higher taxes on corporations, while 21 percent somewhat or strongly oppose it.

With Senate Minority Leader Mitch McConnell (R-Ky.) already pledging that there will be no GOP support in Congress for increasing corporate tax rates to fund the infrastructure plan, this could be the Biden administration’s second large spending package pushed through reconciliation, a process that allows a simple majority vote.

However, Sen. Joe Manchin (D-W.Va.) has already drawn a line in the sand on raising the corporate tax rate, telling a West Virginia radio station that 25 percent would be a more appropriate rate.

While the new poll doesn’t mention a specific level of taxation, the concept of raising taxes on corporations to fund Biden’s infrastructure plan is overwhelmingly backed by Democratic voters, with 85 percent support. Just 4 percent of Democrats said they oppose the tax hike.

Republican voters were nearly split: 42 percent back the president’s plan to raise corporate taxes, while 47 percent oppose it. Independents were much more likely to support funding the infrastructure plan through corporate tax hikes (60 percent) than not (21 percent).

When voters were presented with the choice between making improvements to America’s infrastructure funded through increases to the corporate tax or improving infrastructure only if it were done without the tax increases, 53 percent backed the former option. 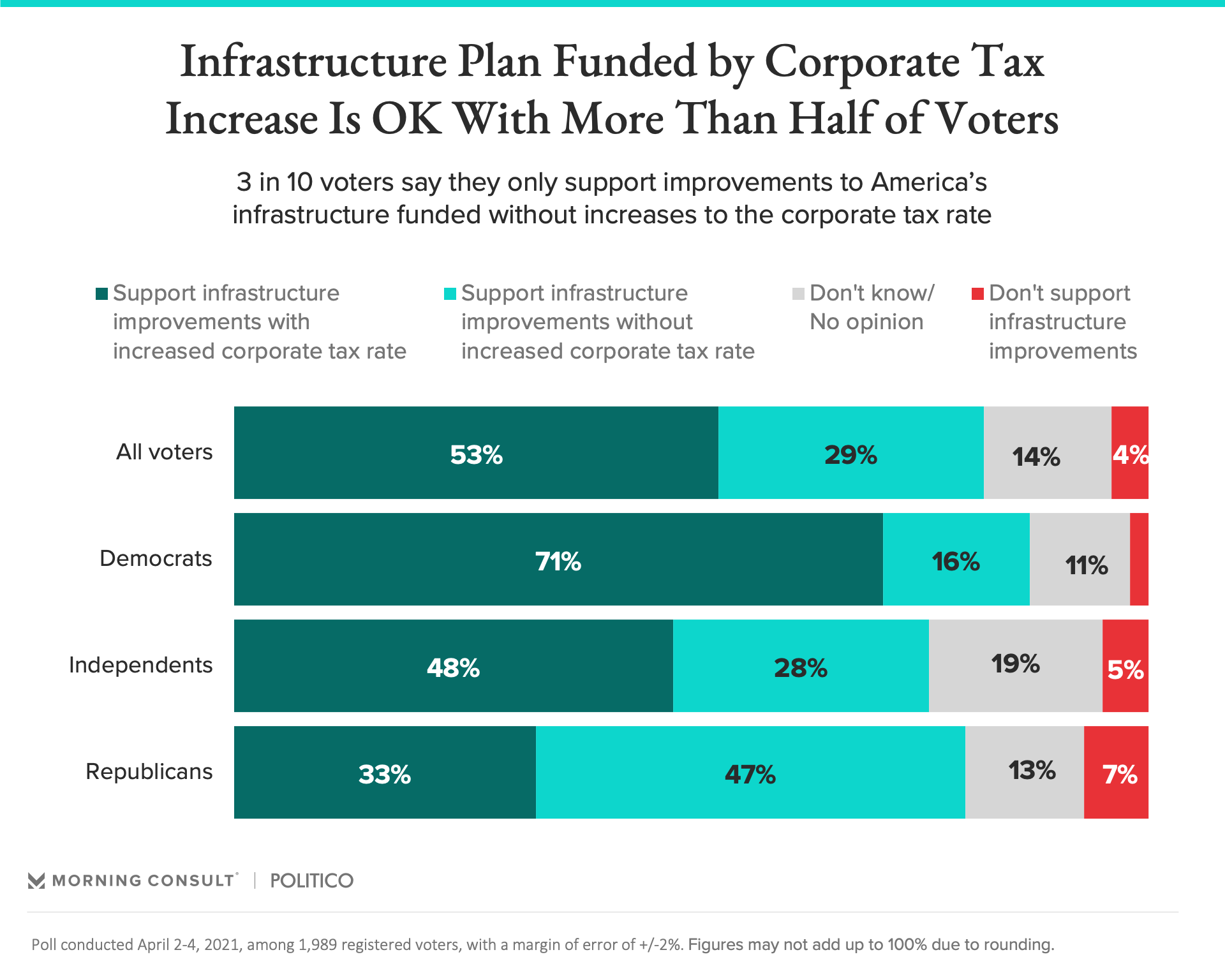 On a broad level, nearly three-quarters of voters agree that corporations should pay higher taxes, including 85 percent of Democrats and 59 percent of Republicans.

When taxes and other potential funding sources aren’t mentioned, Biden’s infrastructure plan enjoys the support of 60 percent of voters, including 84 percent of Democrats, 51 percent of independents and 35 percent of Republicans.

The poll, which was conducted April 2-4, surveyed 1,989 registered voters and has a margin of error of 2 percentage points.