Personal finances in many states dependent on tourism lag behind the rest of the country, writes Morning Consult economist John Leer 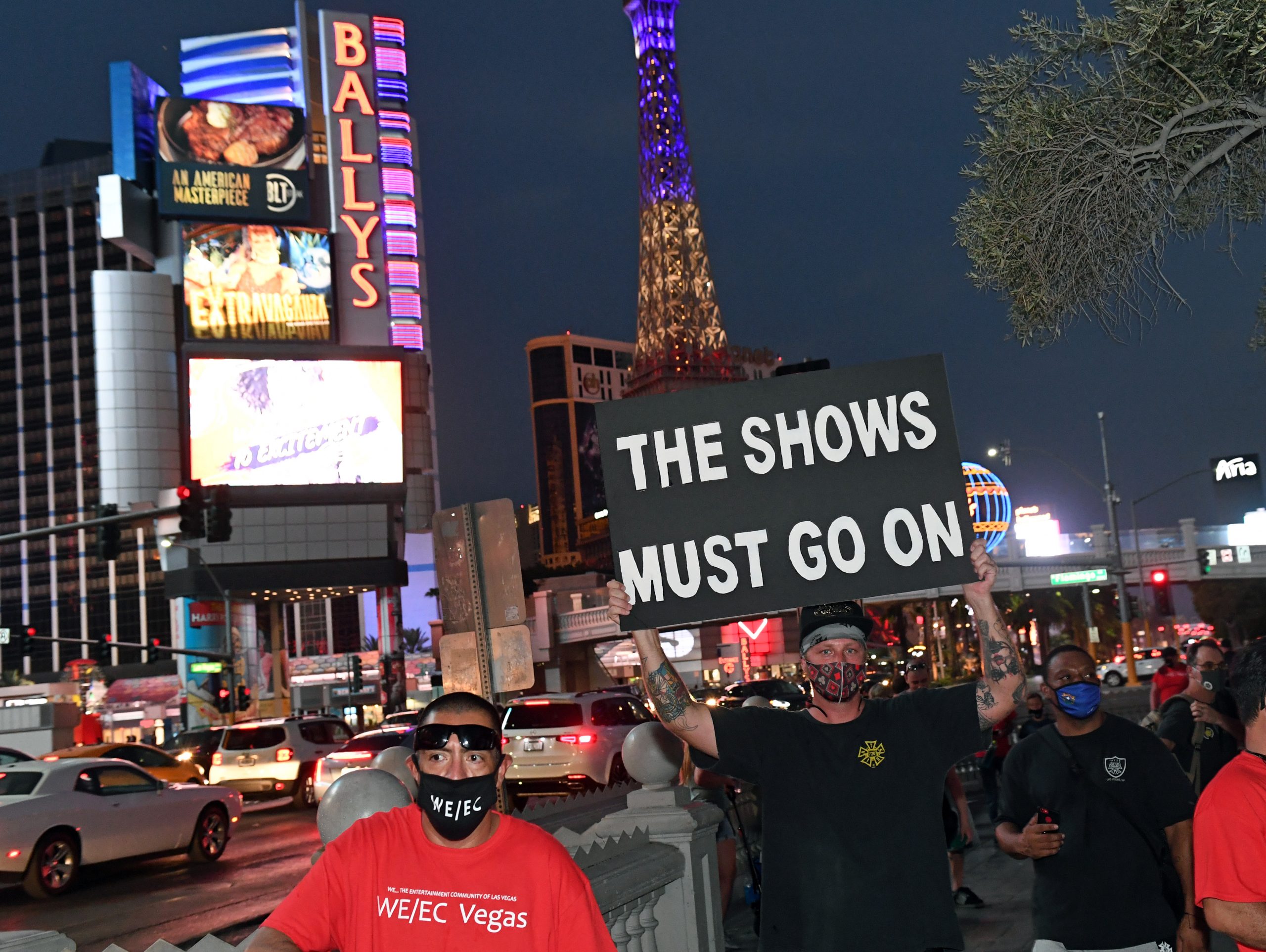 Chaize Rhodes, a stagehand (center), at a "Drive and March" event in Las Vegas in support of the Las Vegas entertainment industry on Aug. 19, 2020. Consumers in tourism-dependent states like Nevada report a shakier recovery in their personal finances compared to consumers in other states, according to Morning Consult's index measuring the current conditions of personal finances. (Photo by Ethan Miller/Getty Images)
By John Leer

The American Rescue Plan combined with persistent decreases in the number of new cases prompted a dramatic increase in Morning Consult’s daily U.S. Index of Consumer Sentiment in March. However, in order to fully grasp the breadth of the U.S. consumer recovery, it’s important to track consumers’ recovery across state lines.

Morning Consult’s index measuring consumers’ assessments of the current conditions of their personal finances provides a state-level indicator of the strength of Americans’ personal finances relative to 12 months ago, making it a useful tool to track the speed of the consumer recovery across state lines. An increase in the index indicates that a greater share of adults in a particular state believe they are doing better now than they were a year ago.

This index is one of five inputs into Morning Consult’s Index of Consumer Sentiment, which is strongly positively correlated with consumer spending. Of those five components, the index of the current conditions of personal finances is the least strongly influenced by consumers’ political views. As a result, it is reasonable to assume that this index will return to its pre-pandemic levels for all states once economic conditions in those states improve.

Despite unprecedented financial support of consumers over the past year, the current conditions of personal finances index remains below its pre-pandemic level across all 50 states.

In March, this index improved in 49 of 50 states, with Idaho being the only state to report a monthly decrease. Over the past three months, consumers across the country have grown significantly closer to returning to their pre-pandemic assessment of their personal finances.

While recent trends are encouraging, consumers in all 50 states remain less financially secure now than they were in January 2020. On average, Morning Consult’s index of consumers’ current conditions remains 11.8 percent below its pre-pandemic level across all 50 states.

From a regional perspective, consumers’ assessments of their personal finances in the Northeast are the closest to where they were prior to the onset of the pandemic, followed by the Midwest, West and South. 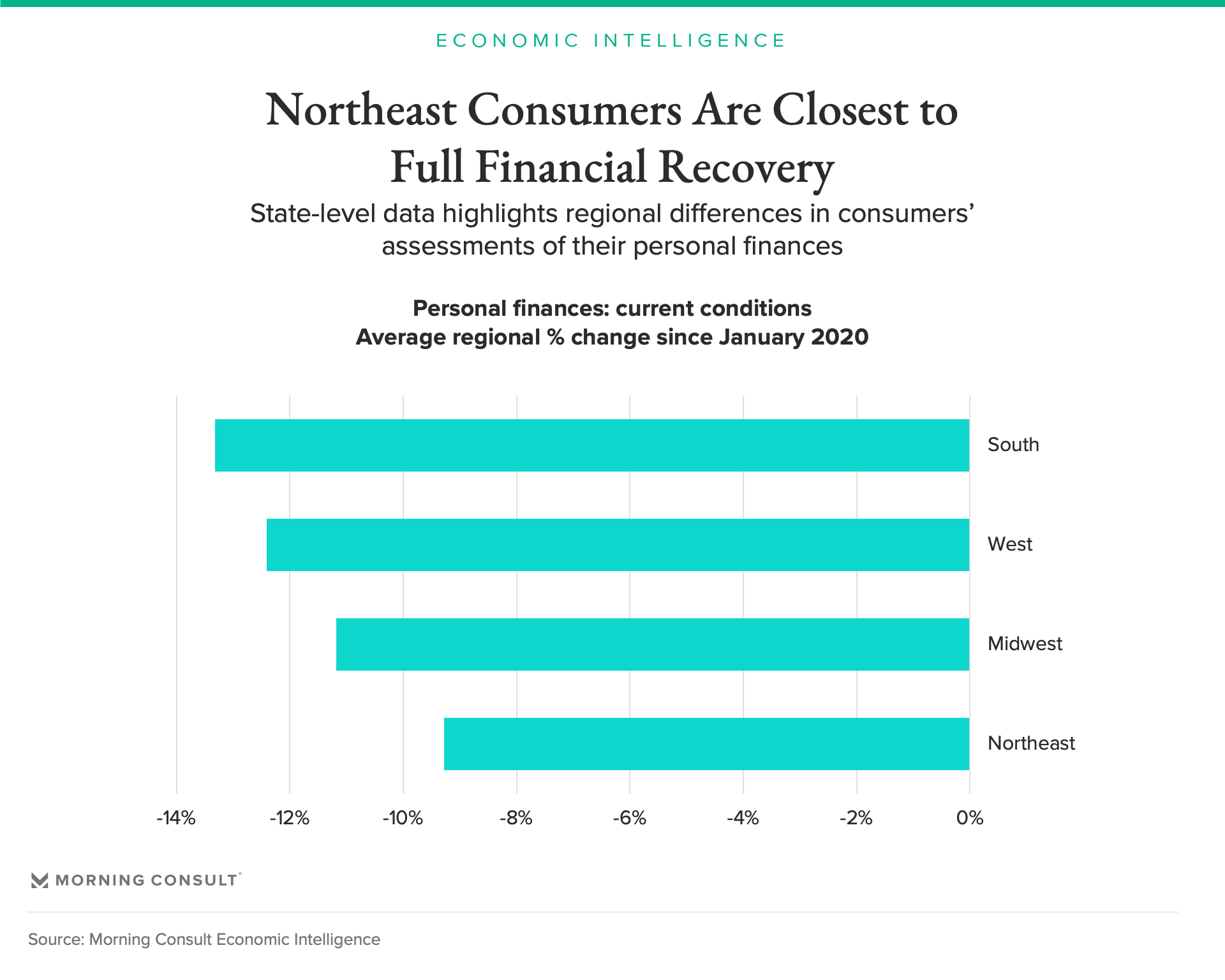 Differences in the generosity of unemployment insurance benefits likely explains some of these regional divergences, with unemployed workers in the South receiving less on average than those living in the four other regions. Average unemployment benefits in the Northeast are also the most generous across the four regions.

The full story is likely more complicated since the average cost of living varies dramatically across regions, with states in the South and Midwest having lower costs of living compared to those in the Northeast and Midwest. Additionally, as described in greater detail below, the industry composition of states’ economies also likely played a significant role in driving regional differences in consumers’ finances.

The top two tourism-dependent states are also the states in which consumers are the furthest away from regaining their pre-pandemic finances. When it comes to describing their personal finances, consumers in Nevada and Hawaii remain significantly less positive than they were in January 2020. These two economies were heavily dependent on tourism prior to the pandemic, and employment in these states directly and indirectly relied on the tourism industry. With travel, tourism and leisure and hospitality being essentially shut down for the past year, the personal finances of residents in these states suffered the most and have recovered the least. 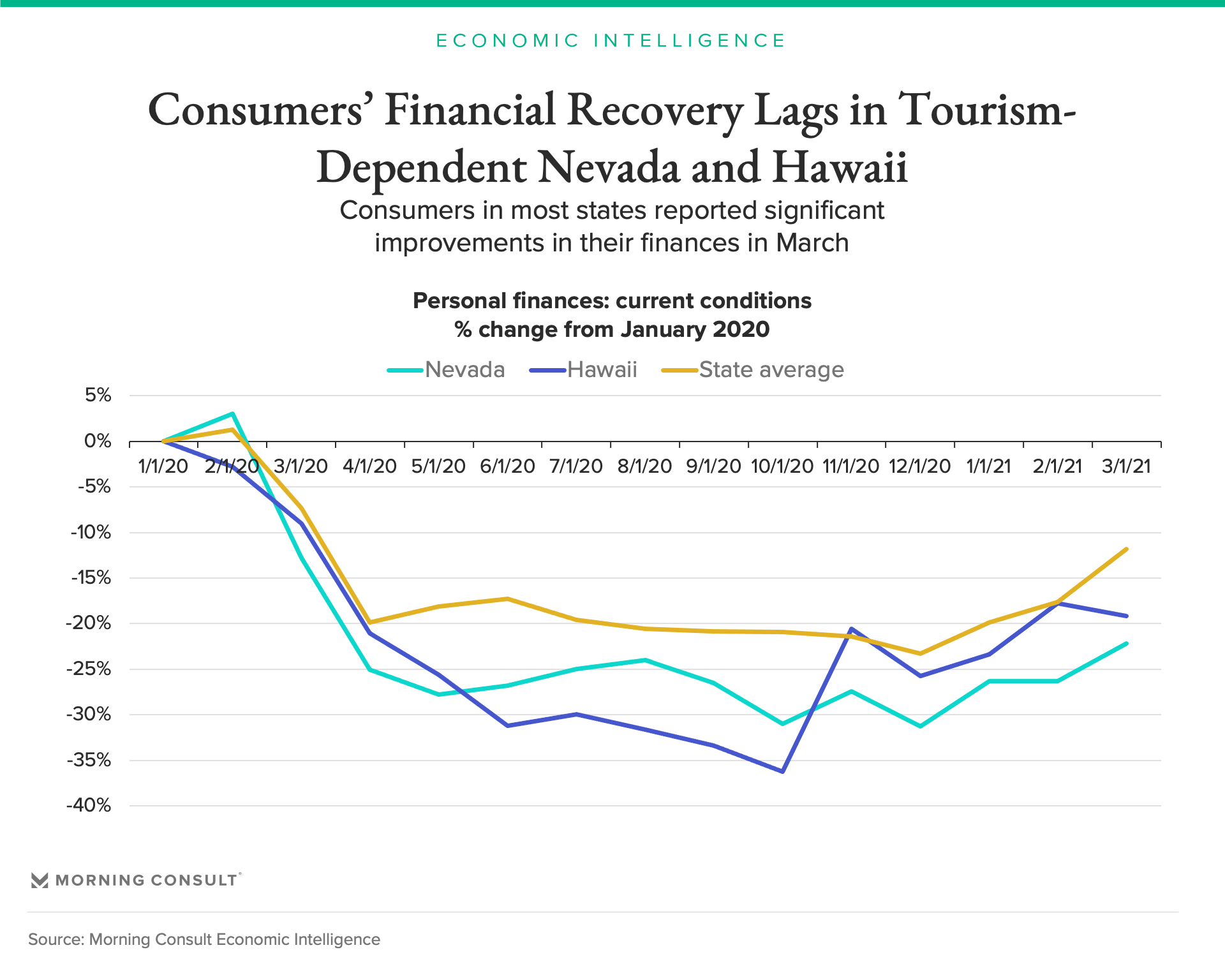 Of the 15 states that have the longest road to recovery, six relied on tourism for at least 5 percent of their total 2019 GDP, according to Stateline of Pew Charitable Trusts, making them relatively dependent on the tourism industry. 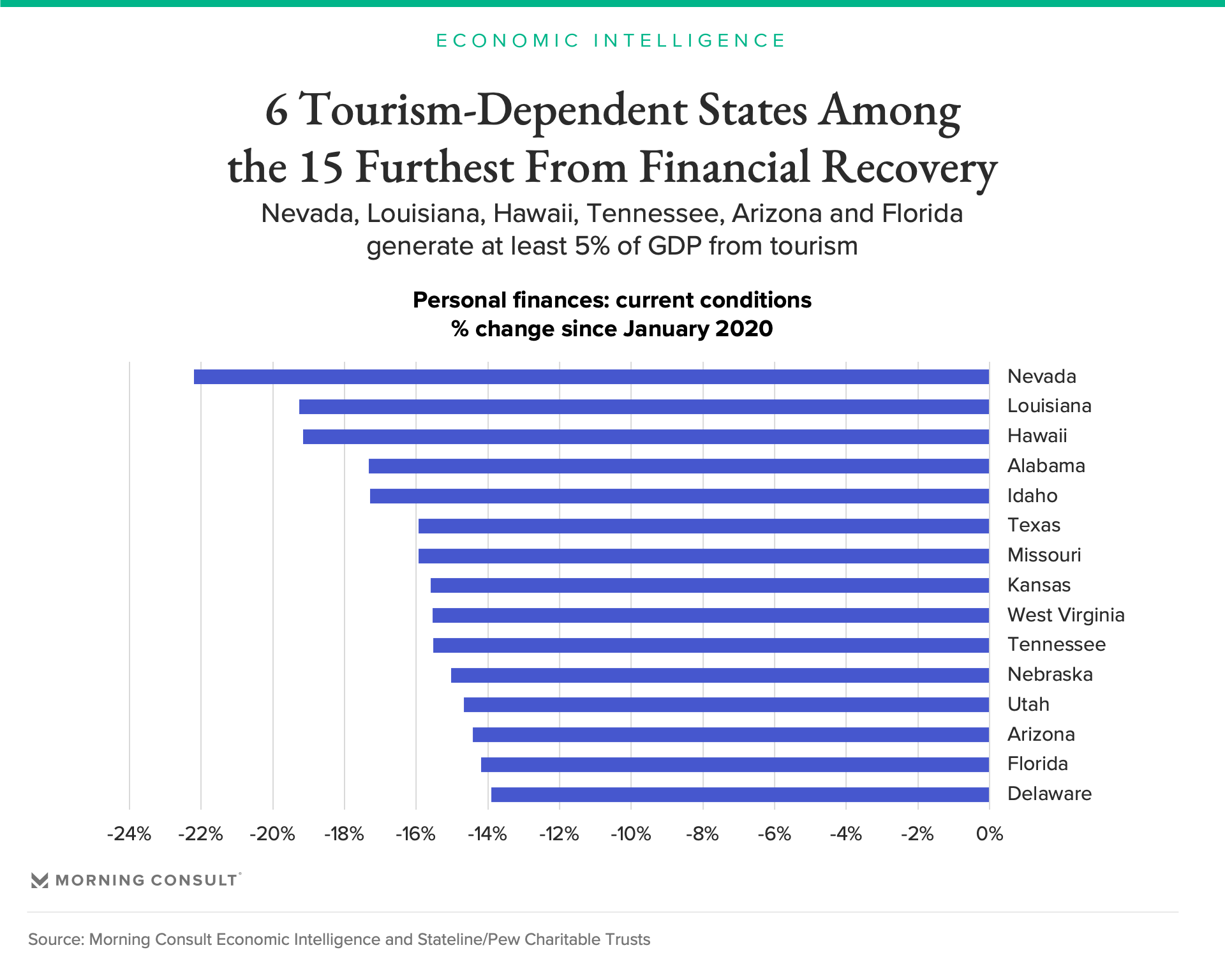 Recoveries in neighboring states a possible source of financial strength

While industry composition is likely an important driver of state-level differences, there is evidence that some consumers in some tourist-dependent states are faring significantly better than others. For example, the economies of Vermont, New Hampshire and Maine were all heavily dependent on tourism prior to the pandemic. However, consumers’ finances in these states are much closer to recovering from the pandemic than those in Nevada or Hawaii.

As shown in the chart below, across the Northeast, residents of Vermont, New Hampshire and Maine recorded the largest decreases in their personal finances over the past 15 months, consistent with the story that tourism-dependent states experienced sharper economic contractions. However, unlike other tourism-dependent states, the personal finances of residents in these three Northeast recovered in line with those in neighboring states over the past three months. 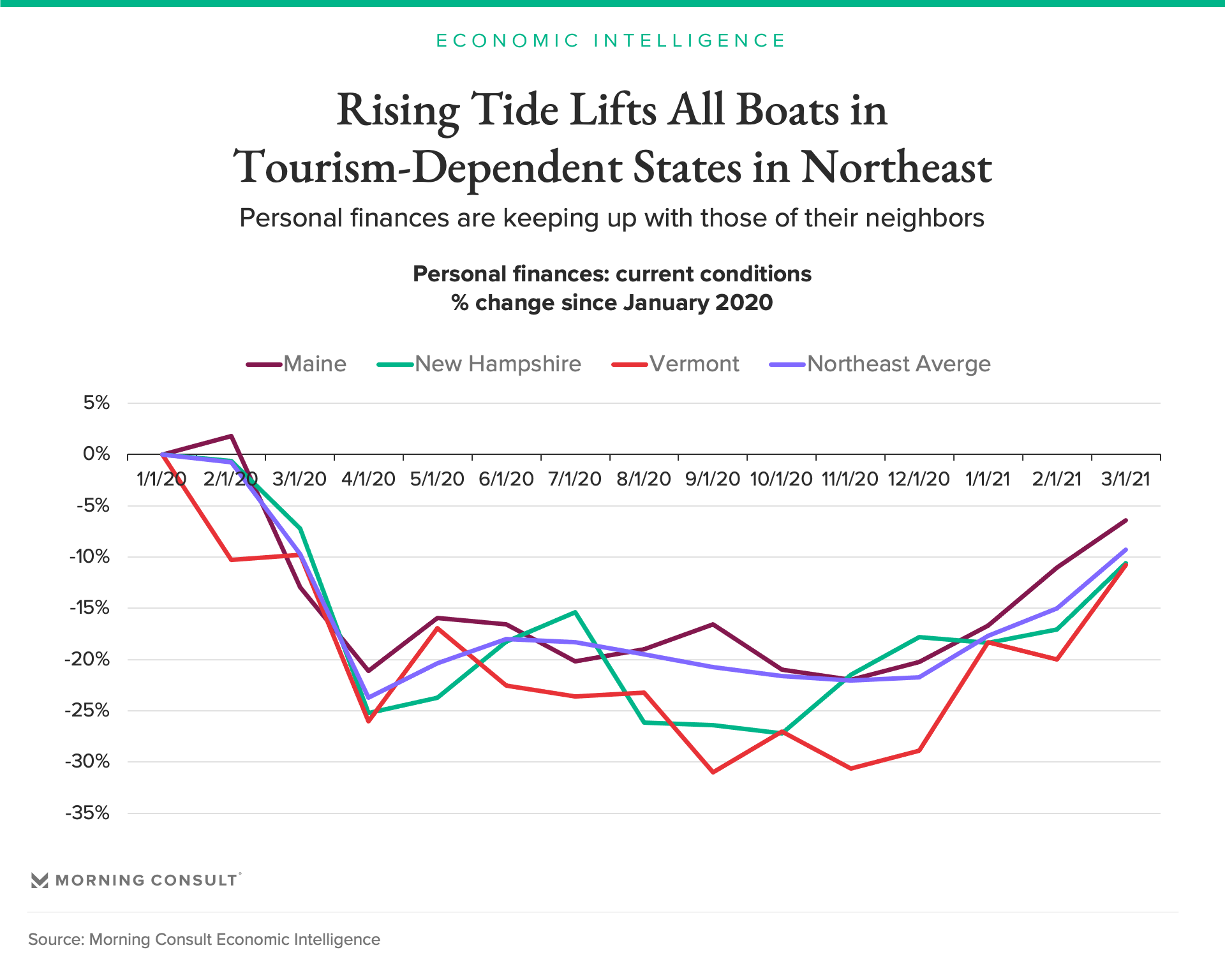 This data provides evidence that industry composition has been an important driver of regional differences in consumers’ personal finances, but it is not the only factor. In particular, regional dynamics may in and of themselves explain some of the variation in consumers’ perceptions of their personal finances. An increase in economic activity in neighboring states has the potential to drive employment and wage growth outside of the tourism industry, thereby providing businesses that were indirectly dependent on tourism the opportunity to diversify its exposure to tourism.