GOP Governors Could Be Star Recruits to Win Back the Senate Majority. But How They Look on Paper Doesn’t Tell the Whole Story 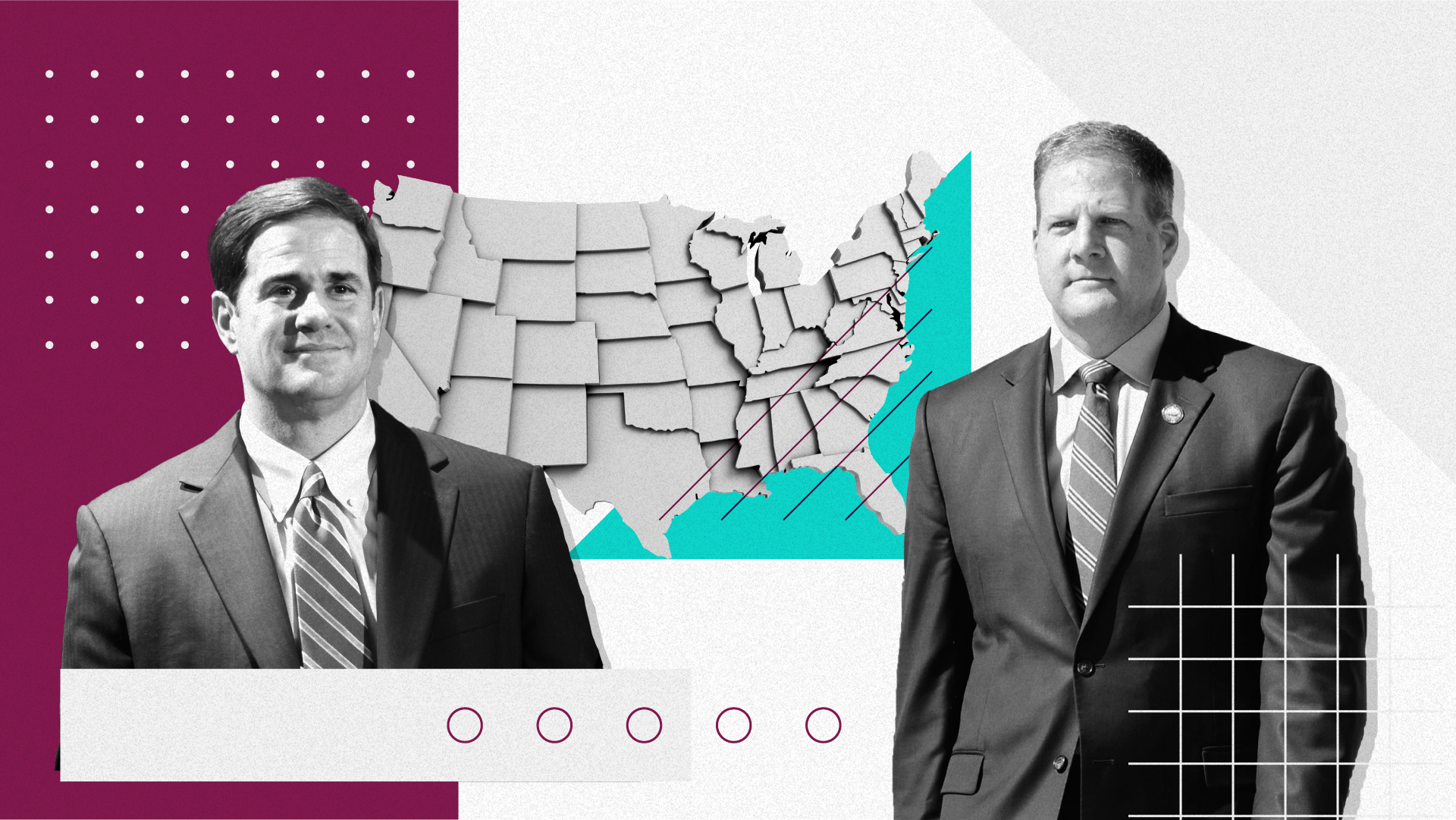 Gov. Doug Ducey of Arizona, left, and Gov. Chris Sununu of New Hampshire are two of the top recruiting targets for Senate Republicans ahead of next year's midterm elections. (Getty Images / Morning Consult artwork by Tadiana Martinez)
By Eli Yokley

Republican Govs. Chris Sununu of New Hampshire and Doug Ducey of Arizona have been floated as star recruits in the GOP’s effort to wrest control of the Senate from Democrats next year. But while Morning Consult Political Intelligence tracking suggests Sununu is the stronger potential candidate, strategists involved in the states believe those dynamics could change as the GOP looks to unseat two relatively popular Democratic incumbents.

The governor-to-senator route isn’t necessarily a sure thing these days: According to Dr. Eric Ostermeier, a University of Minnesota research fellow and founder of Smart Politics, a nonpartisan political news site, just 18 of the 160 people who were elected governor since 1900 and went on to become senator did so during this century.

“The vast majority of these recent success stories, however, were not sitting governors at the time of their election to the chamber,” he said. But New Hampshire, where Sununu began his third term as governor earlier this year, is one of the exceptions: It sent then-Gov. Maggie Hassan (D) to Washington in America’s closest Senate race of 2016, on the same ballot that gave Sununu the keys to the governor’s mansion in Concord.

Sununu has an advantage working in his favor: a double-digit approval rating lead over Hassan, who’s popular in her own right. 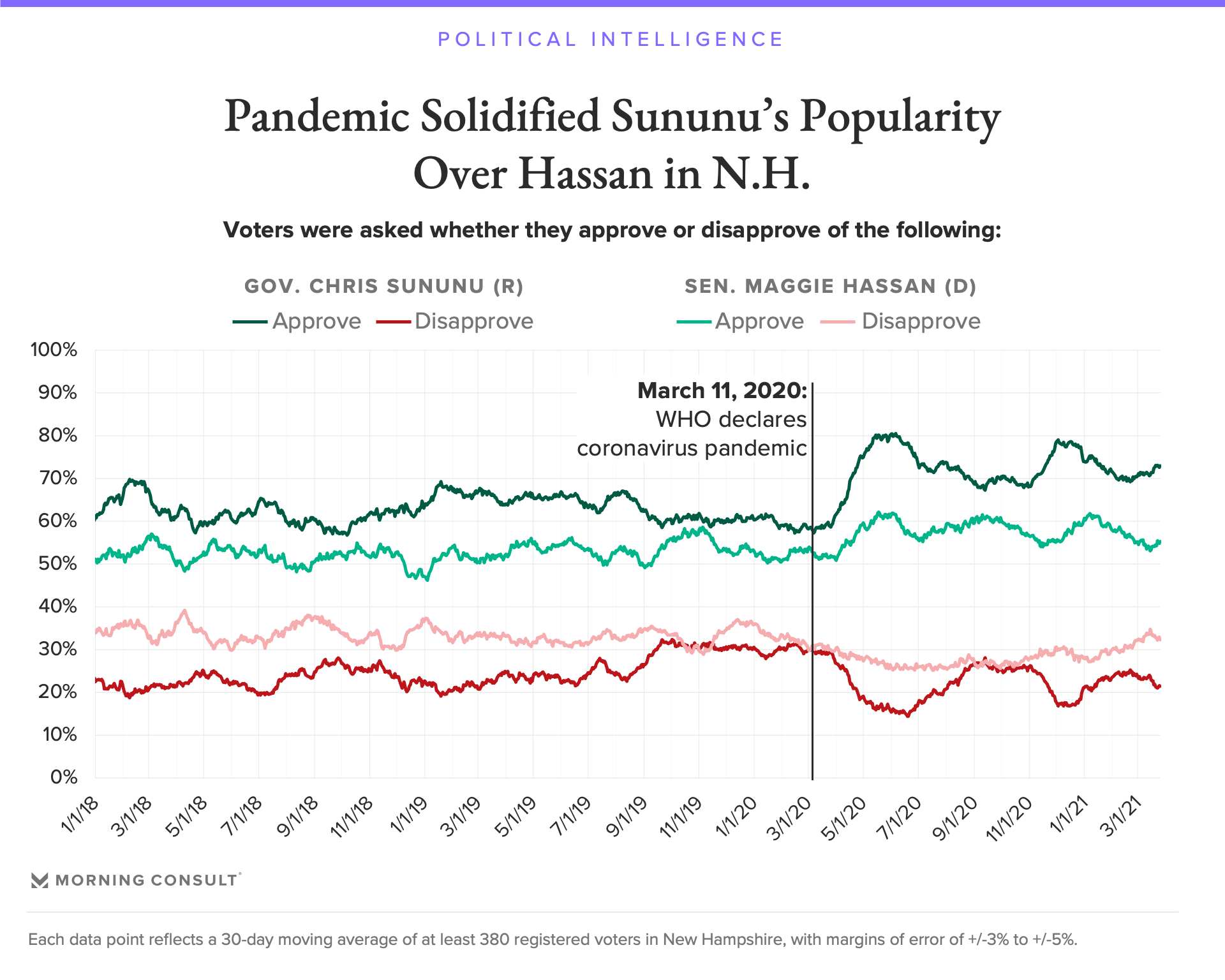 The overall numbers are largely similar among self-identified independent voters in the state, who make up a significant share of the electorate, while Sununu’s bipartisan accolades from Democratic voters are not matched by approval on the Republican side for Hassan.

“Senator Hassan is in a strong position heading into her re-election campaign, and her standing will only continue to strengthen as Granite Staters hear more about her work to deliver for the state,” said Ray Buckley, chairman of the New Hampshire Democratic Party, in a Monday email.

While Sununu was already more popular than the first-term senator before the onset of the COVID-19 pandemic, the past year has boosted his approval rating as he joined many other governors in enjoying a “rally ‘round the flag effect” that policymakers in Washington failed to carry for more than a month or so.

“It’s a small state – you’re almost like the mayor and get to go around and participate in these noncontroversial events that earn positive media coverage,” said Chris Moyer, who worked on the New Hampshire Democratic campaigns of Molly Kelly for governor in 2018 and Cory Booker for president in 2019 and 2020. “That’s been a big part of him building his image up to be this nice guy, but overlooks the positions he holds on a range of issues.”

At the federal level there tends to be a lot more gravity pulling people back to their corners than there is for some of the state and lower-level offices.

Harrell Kirstein, a Democratic strategist who managed New Hampshire Sen. Jeanne Shaheen’s successful 2020 re-election bid, said some of the realignment Democrats would need to see in sentiment about Sununu will come naturally in a race for national office.

“In a state like New Hampshire, where it is so closely divided between the two parties, at the federal level there tends to be a lot more gravity pulling people back to their corners than there is for some of the state and lower-level offices,” he said, noting that both Portsmouth and Keene – two New Hampshire cities where President Joe Biden handily beat Donald Trump in November — have Republican mayors.

But Democrats will also have to lay a glove on the guy, said New Hampshire Republican strategist Michael Dennehy, who believes Sununu is likely the GOP’s best candidate to try to unseat Hassan.

“He hasn’t really been challenged by a strong candidate,” he said. “The biggest challenge is going to be his personality and lack of experience running against someone strong.”

Democrats have already criticized Sununu for New Hampshire’s vaccine rollout after he initially blocked out-of-state college students from receiving the state’s doses. He’s now opened eligibility to nonresidents, and New Hampshire tops the list of states by share of people who have received at least one vaccine, per The New York Times.

The New Hampshire Democratic Party is taking other steps. It organized an online petition that seeks to tie Sununu to the more unsavory elements of his party, calling on the governor to disinvite embattled Rep. Matt Gaetz (R-Fla.), who is under investigation for sex trafficking, from a pending local Republican Party fundraiser. The party also signaled that it would highlight his opposition to Biden’s popular $1.9 trillion COVID-19 relief package before he appeared on camera to tout the pending financial boost to the state’s coffers.

In response to the Gaetz-related attack line, Sununu spokesman Ben Vihstadt said in an email that the governor “of course believes the Nashua Republican City Committee should rescind their invitation and is surprised the Committee hasn’t already done so.” He also pushed back on attacks on Sununu’s position on the COVID-19 relief package, noting the governor’s concerns about the formula for state unemployment.

“He has not decided what comes next,” Vihstadt said of Sununu’s future plans. “His next steps could be running for re-election, running for U.S. Senate, or returning to the private sector to spend more time with his family, and expects a decision will be made sometime after the legislative session ends in June.”

Regardless of his decision, Republicans are relying in part on anti-Washington sentiment and traditional midterm dynamics against the party in power to keep their hopes of winning back the Senate majority alive.

“For better or worse, it’s really come down to becoming a partisan hack: Are you there for all voters, or are you there for Democrats?” Dennehy said. “That’s what I believe is going to be the biggest benefit for Republicans in 2022.”

Sen. Mark Kelly, the Democrat who unseated Republican Sen. Martha McSally last fall, is starting his term as Arizona’s most popular statewide official: As of March 26, 48 percent of voters in the state approved of his job performance, more than the share who said the same of Sen. Kyrsten Sinema (46 percent) or Ducey (43 percent), and largely unchanged so far this year. 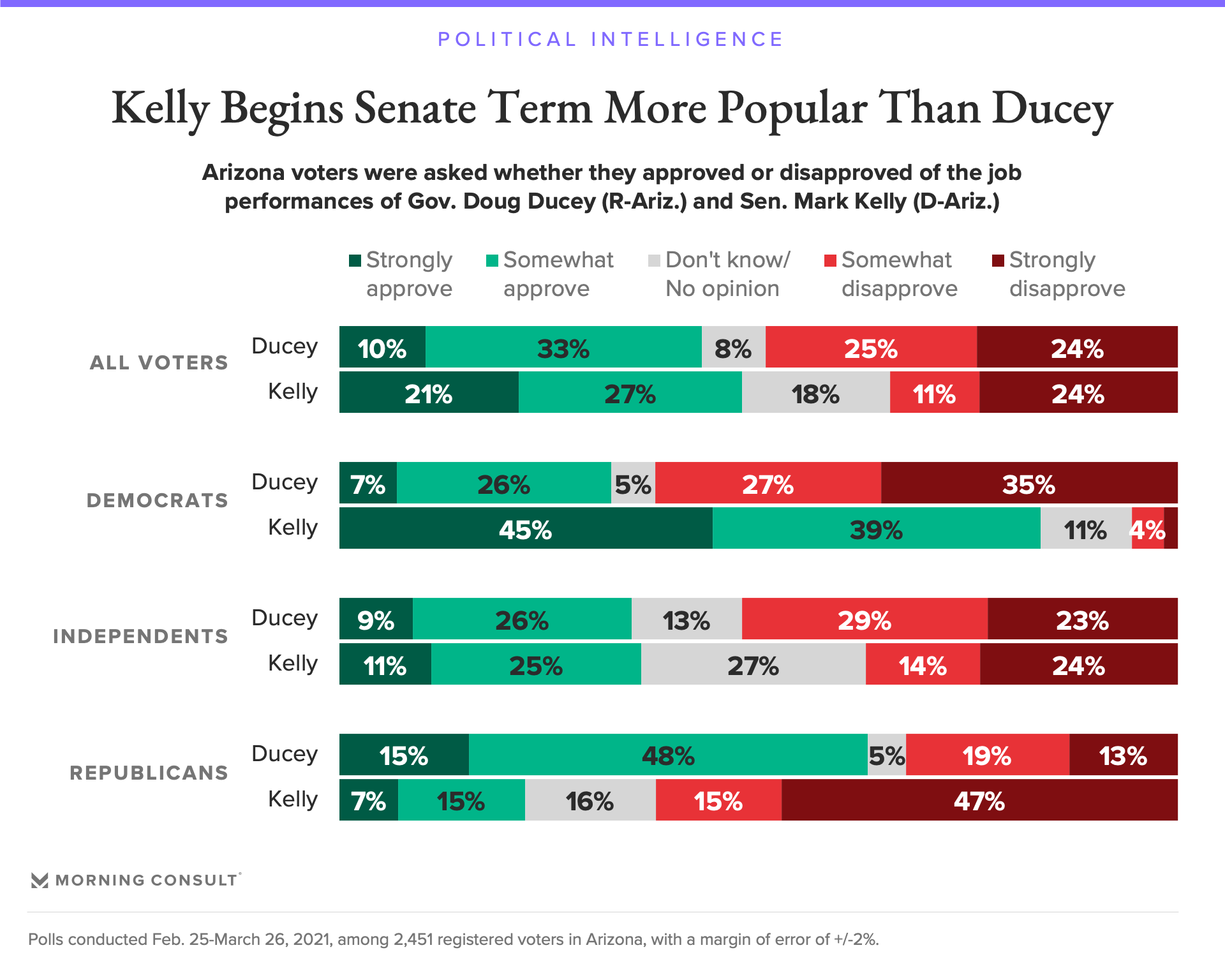 Kelly is boosted by solid numbers among Democratic voters, and independents are roughly split on his performance, though 27 percent said they did not know or had no opinion of him. Sixty-two percent of Republicans view him unfavorably.

Chad Campbell, a Democratic strategist and former Arizona state House minority leader, said Kelly’s level of popularity in Arizona will likely change once voters move on from the party’s most popular item of their agenda – the COVID-19 relief legislation – to other pressing concerns. Strategists in both parties said the biggest challenge facing Kelly in the Grand Canyon State is how Democrats in Washington handle immigration and the surge of migrants arriving at the U.S.-Mexico border – a cudgel already being wielded by the Senate GOP’s campaign arm.

“This has to be handled correctly by the Biden administration and the federal delegation to solve the humanitarian issue and the immigration issue in a bigger sense,” Campbell said. “It takes some time,” he added, noting that Democrats will have to make the case to voters that “it isn’t going to be solved overnight.”

Kelly has visited the border region more than once since he took office in January to meet with federal law enforcement and local leaders as he pushed the Biden administration for additional resources and coronavirus testing protocols to address the migration issues.

“Senator Kelly is focused on addressing the border crisis, not politics,” said Kelly spokesman Jacob Peters. “He’s doing the work with Republicans and Democrats to get Arizona border communities the resources and support they need.”

Republicans will need to find a formidable challenger who can appeal beyond the party’s base in order to avoid a repeat of the mistakes that led to two losses by McSally, whom Ducey appointed to the seat in 2018 after her loss to Sinema.

He’s taken some hits among Republicans, and there’s no doubt that’s because he stood up and defended the election system and didn’t do the president’s bidding.

While Ducey, who is set to leave office after next year’s election due to term limits, has publicly ruled out a Senate campaign, that hasn’t stopped the aspirational chatter among Republican operatives in private that he might be inclined change his mind. But Ducey’s lost a significant amount of popularity with the party’s base after he stood up to Trump’s election challenges, going from a 76 percent GOP job approval rating on Nov. 7, the day Biden’s victory was declared, to a 63 percent approval rating in the latest surveys.

“He’s taken some hits among Republicans, and there’s no doubt that’s because he stood up and defended the election system and didn’t do the president’s bidding,” said Arizona Republican lobbyist Chuck Coughlin, who led former Republican Gov. Jan Brewer’s successful re-election campaign in 2010. “That’s a problem for him electorally.” 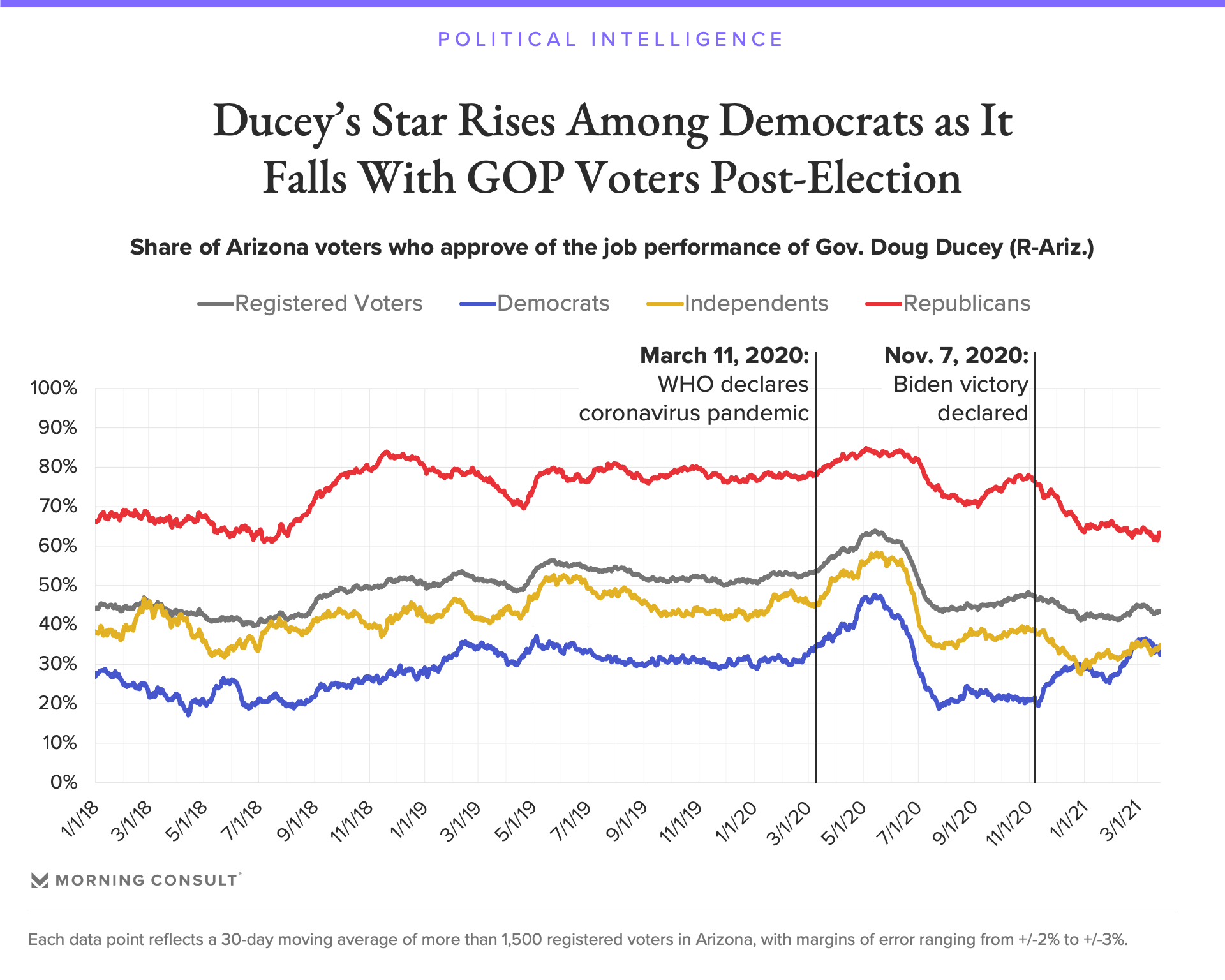 While Ducey’s lost ground with the GOP, he’s made up some of it among his typical opposition. Thirty-two percent of Democratic voters approve of his job performance, up 10 points since November. When paired with the GOP movement, it resulted in a slight downtick in perception of his job performance among all voters, with his approval rating falling from 47 percent to 43 percent and his disapproval rating rising from 45 percent to 49 percent.

Coughlin, like others in the state, believes Ducey when he says he will not run for Senate next year given that he could avoid what would likely be a nasty primary, leaving Arizona with a “red hot” post-pandemic economy and a record of having helped to shepherd GOP gubernatorial wins in his role as chairman of the Republican Governors Association – a “good story to tell” for a man who’s made no secret of his presidential ambitions. Ducey’s office did not respond to a request for comment.

“My inclination is he wants to use this cycle to raise money for the RGA and let the Republican Party figure out who it’s going to be,” Coughlin said. “He’s happy in that spot trying to cultivate this place for himself with whatever way the 2024 ballot looks like.”

Correction: A previous version of this story misstated when Shaheen most recently won re-election.