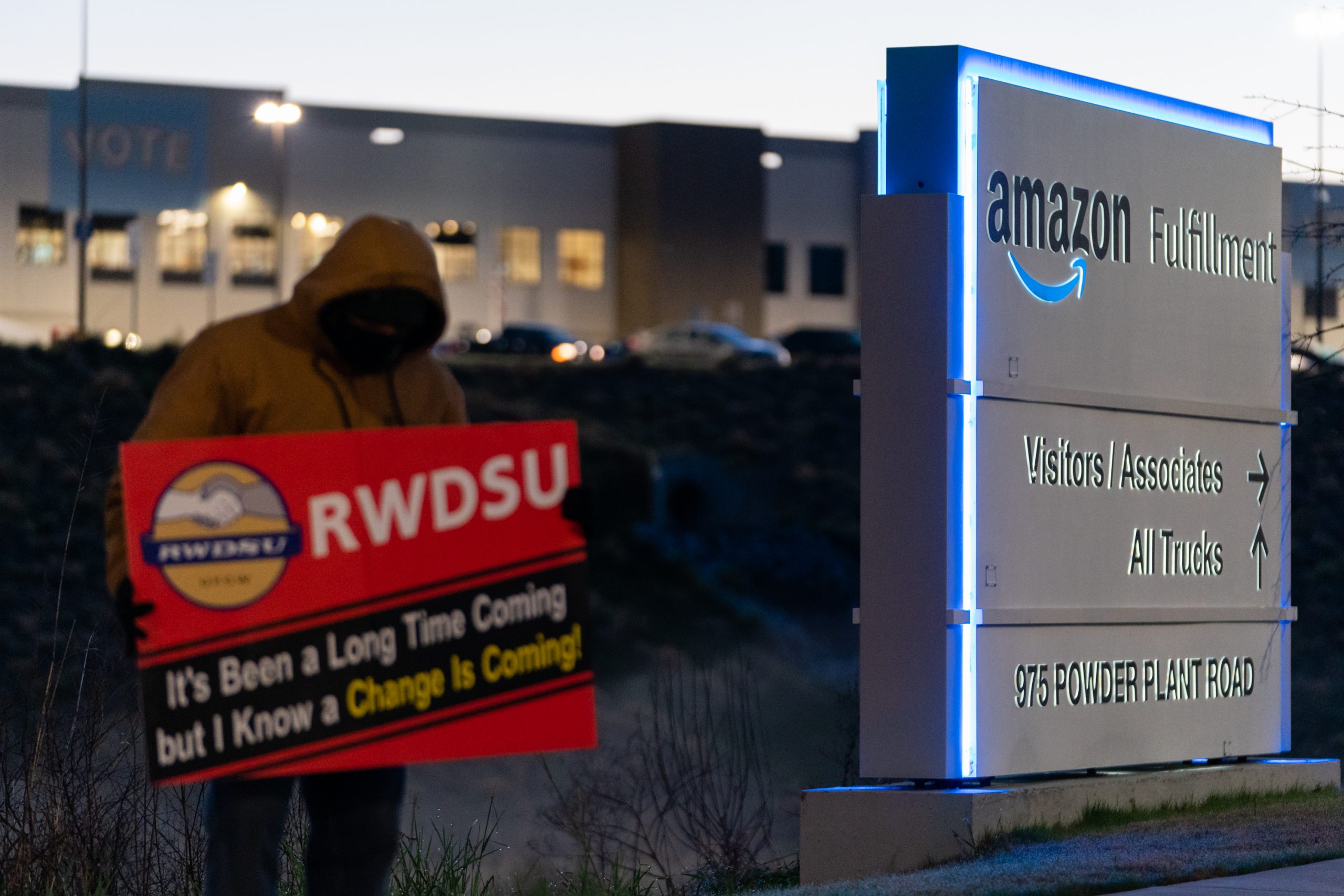 A Retail, Wholesale and Department Store Union rep holds a sign outside the Amazon fulfillment warehouse at the center of a unionization drive on March 29, 2021, in Bessemer, Ala. (Elijah Nouvelage/Getty Images)
By Sam Sabin

Labor activists don’t just have an issue with Amazon.com Inc. factory workers in Bessemer, Ala., who voted against unionizing earlier this month — they also have a messaging problem with registered voters, a new Morning Consult/Politico poll suggests.

In the survey conducted April 9-12, 73 percent of a subsample of 1,028 registered voters said they at least somewhat supported employees’ right to bargain collectively for workplace conditions such as pay, health care and time off. That share includes 89 percent of Democrats and 59 percent of Republicans.

But once the phrase “labor union” was included in the question framing and the other collective bargaining specifics were left out, support dropped. Among a second sample of 964 voters, 54 percent said they at least somewhat supported labor unions, including 69 percent of Democrats and 37 percent of Republicans.

The poll was conducted among a total of 1,992 registered voters, with a margin of error of 2 percentage points for the entire sample and 3 points in the subsamples. 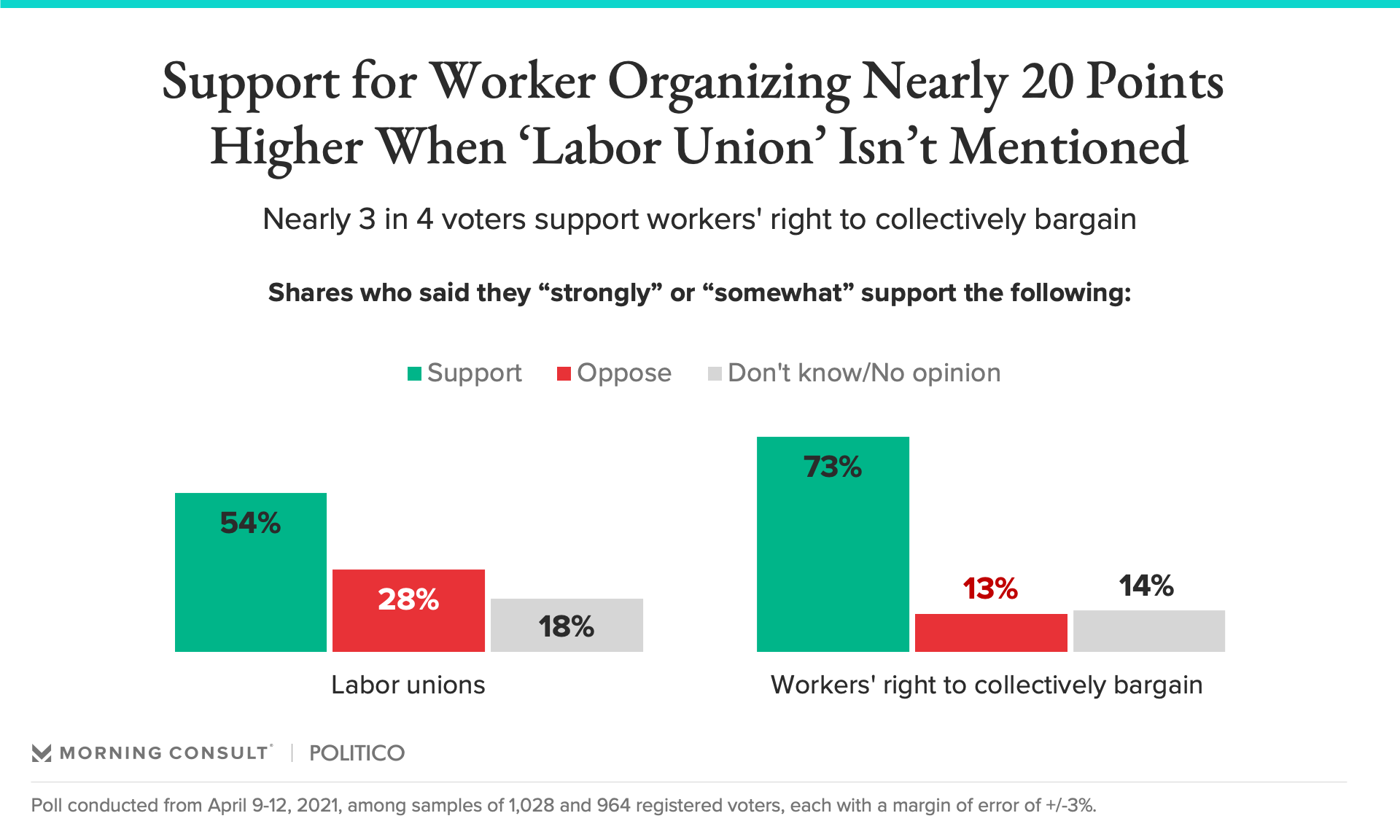 In the debate over labor unionization in the tech industry, all eyes have been on a small Alabama suburb since November, when workers at an Amazon warehouse first filed notice to hold an election to form the company’s first warehouse union through the Retail, Wholesale and Department Store Union. After months of campaigning from Amazon against the plan and President Joe Biden subtly tossing his support behind workers’ joining the union, organizers fell short in a 1,798-738 vote against unionizing, announced Friday.

In the Morning Consult/Politico survey, 47 percent of all voters said they had seen, read or heard “a lot” or “some” about Amazon workers’ vote against unionizing, drawing more attention than Amazon Chief Executive Jeff Bezos’ support for a hike in corporate tax rates to support Biden’s infrastructure plan (37 percent).

While RWDSU said it plans to challenge the vote count, the apparent loss strikes a blow to tech worker-led efforts to change how companies treat their employees. For instance, the National Labor Relations Board informed two former Amazon employees last week that Amazon illegally retaliated against them when they were fired after publicly pushing the company to re-assess its environmental policies and treatment of warehouse workers.

Related: After a Year in Washington, Food Delivery Apps Strategize for Battles Ahead

Yet, efforts to unionize in the industry have become flat-footed as companies like Amazon argue they’re already meeting workers’ needs with high minimum wages, strong benefits and flexible work plans. Amazon pays its workers at least $15 an hour, which many Democratic lawmakers have been saying should be the national standard.

But while support for unionizing dropped when the term “labor union” was included in the new polling question, majority support has barely budged since April 2020, when 56 percent said they supported labor unions and 77 percent said they backed workers’ right to collectively bargain.

A Gallup survey conducted annually before Labor Day showed that 65 percent of Americans supported labor unions in 2020, keeping in line with the 64 percent who said they supported them a year before.