As the Coronavirus Rages in Brazil, the Global Economic Recovery Is Leaving the Country Behind and Its President Politically Exposed

Morning Consult economist John Leer says Brazil's inability to contain the coronavirus is leading to a decline in consumer confidence, increase in food insecurity and a deterioration in personal finances, all of which are reflected in lower approval ratings for Jair Bolsonaro 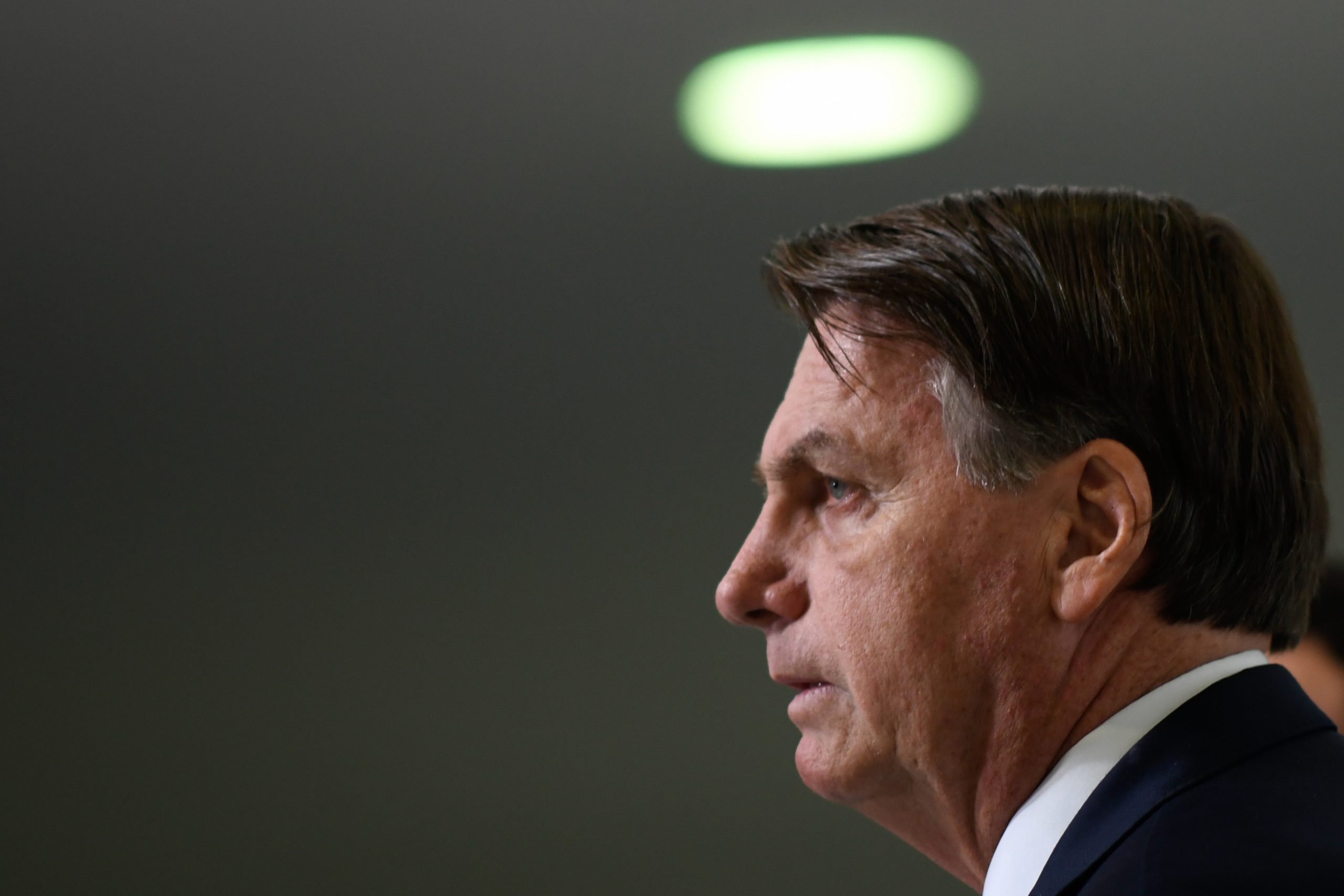 Brazilian President Jair Bolsonaro announces the disbursement of emergency aid on March 31, 2021, in Brasilia. That aid has yet to be reflected in Morning Consult's data that gauges consumers' assessment of their personal finances.(Mateus Bononi/Getty Images)
By John Leer

As many consumers across the world contemplate a more normal 2021, Brazilians are falling further behind in their fight against the coronavirus and its economic consequences. The growing number of deaths and mounting delays in acquiring and distributing vaccines are straining the country’s health care system and harming its economic prospects.

The multispeed rebound in global consumer confidence has placed Brazilian consumers at a distinct disadvantage in terms of their purchasing power, and these developments have weakened President Jair Bolsonaro’s political capital.

Consumer confidence in Brazil continues to decline through the middle of April. Weekly data shows that Brazilian consumer confidence is on pace for yet another decline in the month of April, although at a slower rate than in March. The biggest drop in confidence comes from Brazil’s Index of Current Conditions, which has remained below the level recorded during the initial fallout from the pandemic since the week ending April 21, 2020. 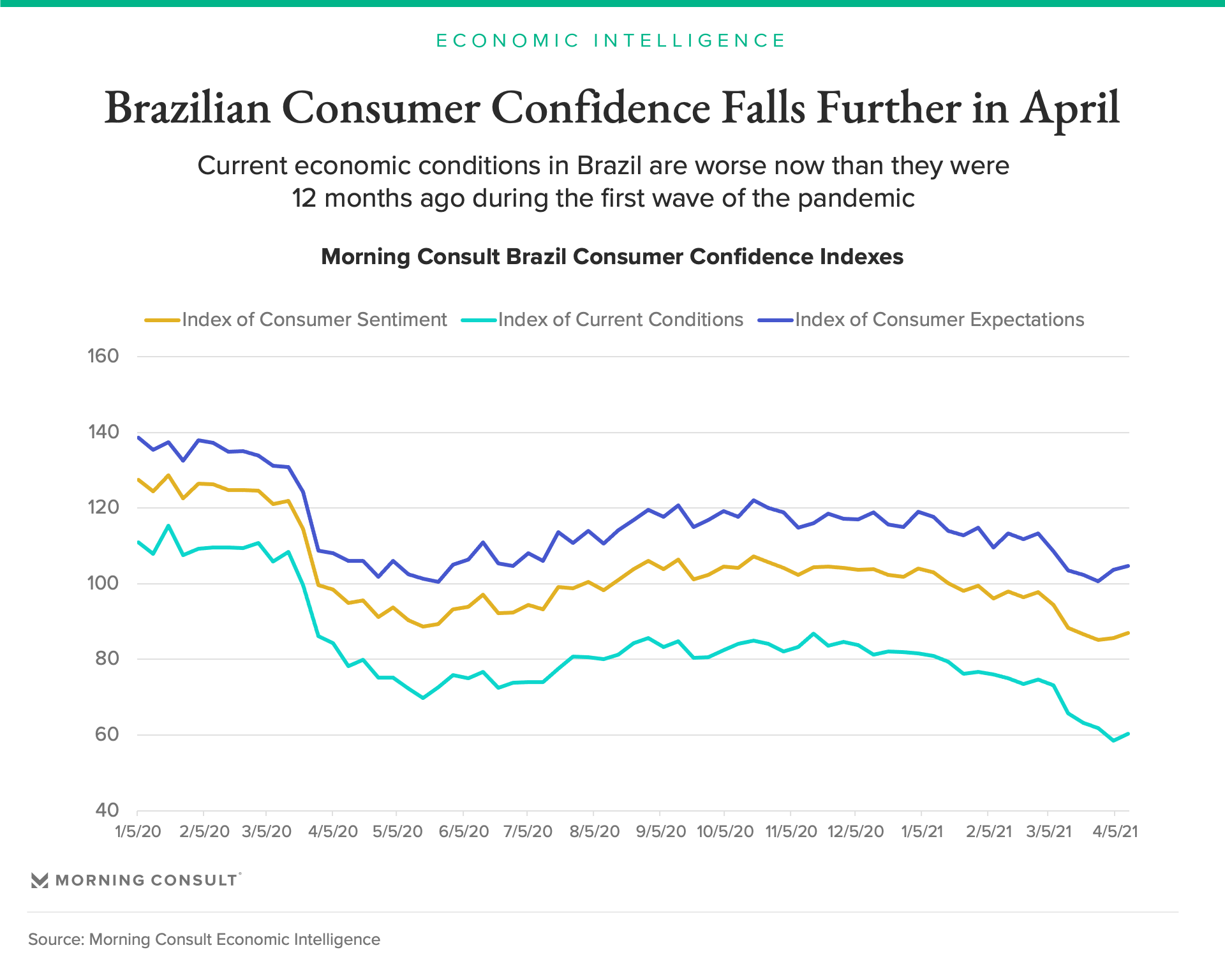 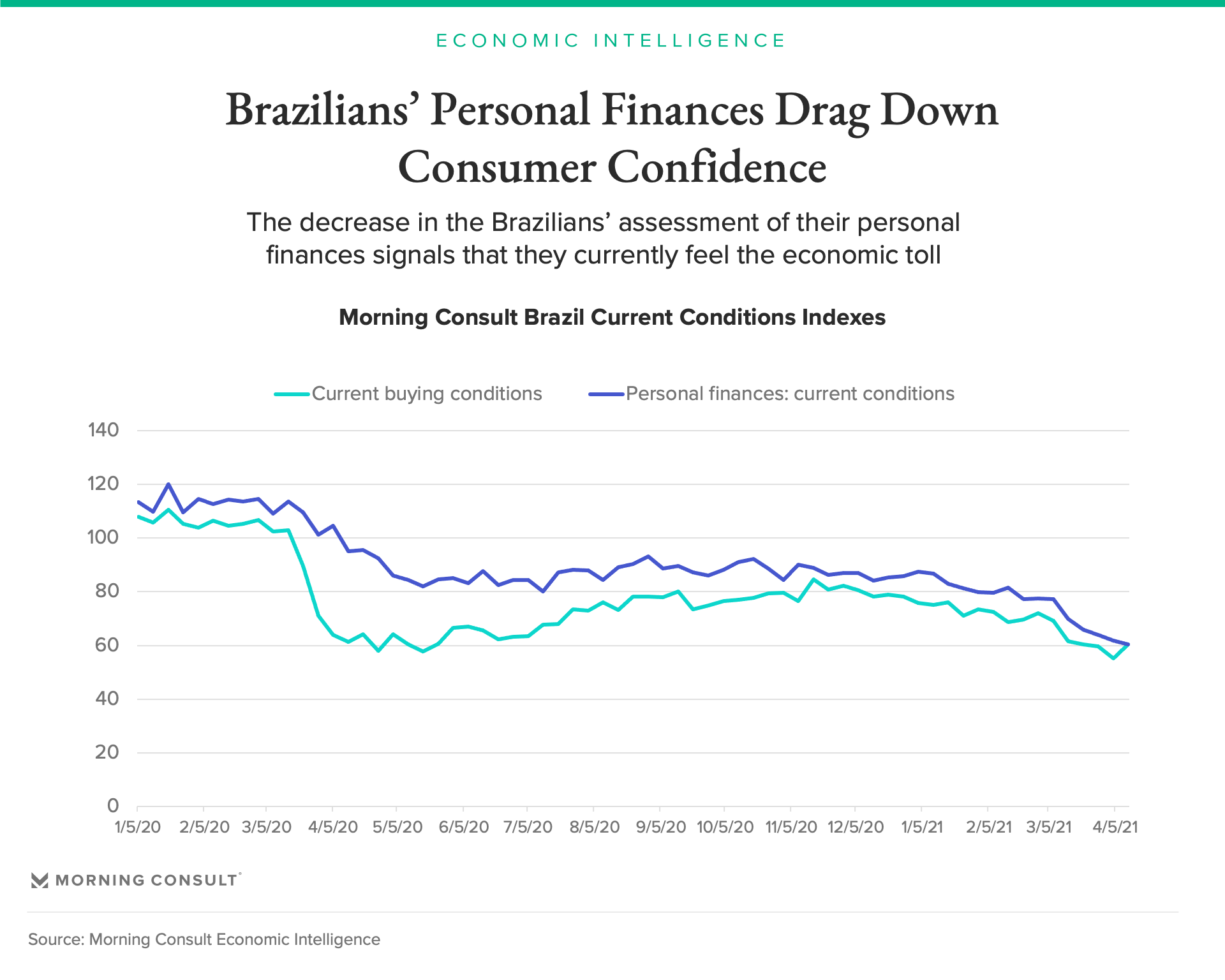 To date, Morning Consult’s data provides no evidence that the stimulus package passed in March has materially altered Brazilians’ assessment of their personal finances. The law includes monthly payments of roughly 150-250 reais ($26-$43) to certain qualifying residents for the next four months, which have the potential to significantly improve the personal finances of Brazil’s poorest residents. However, properly distributing those funds in a timely manner will likely be challenging.

The current economic situation in Brazil is particularly challenging because of the global context within which it is transpiring. Economies across the world are in the process of economic rebounds, meaning that global demand for Brazilian goods is increasing at a time when Brazilians themselves lack the finances to pay for basics, such as food. As of 2019 prior to the pandemic, China and the United States were the two largest importers of Brazilian goods, and consumers in both of these countries rapidly rebounded toward the end of 2020 and early 2021. While rising global demand for Brazilian goods drove prices higher, Brazilians’ finances have not kept pace, leaving them less capable of purchasing food produced in Brazil.

These global demand dynamics are reflected in increased food shortages and food insecurity in Brazil. In February, the share of Brazilians who often lacked enough food to eat in the past three months increased to 3.64 percent, up from 0.5 percent in January. In March, 47.9 percent of all respondents indicated that they had enough of the kinds of food they wanted to eat, down from 49.7 percent in January.

While neither of these developments in and of themselves indicate a dramatic increase in hunger in Brazil over the past three months, the trend is troubling due to the high share of Brazilians at risk of experiencing hunger relative to the average across the 15 largest global economies. If price pressures continue, the 9.8 percent of Brazilians who sometimes lacked adequate food to eat could rapidly suffer from frequent hunger. 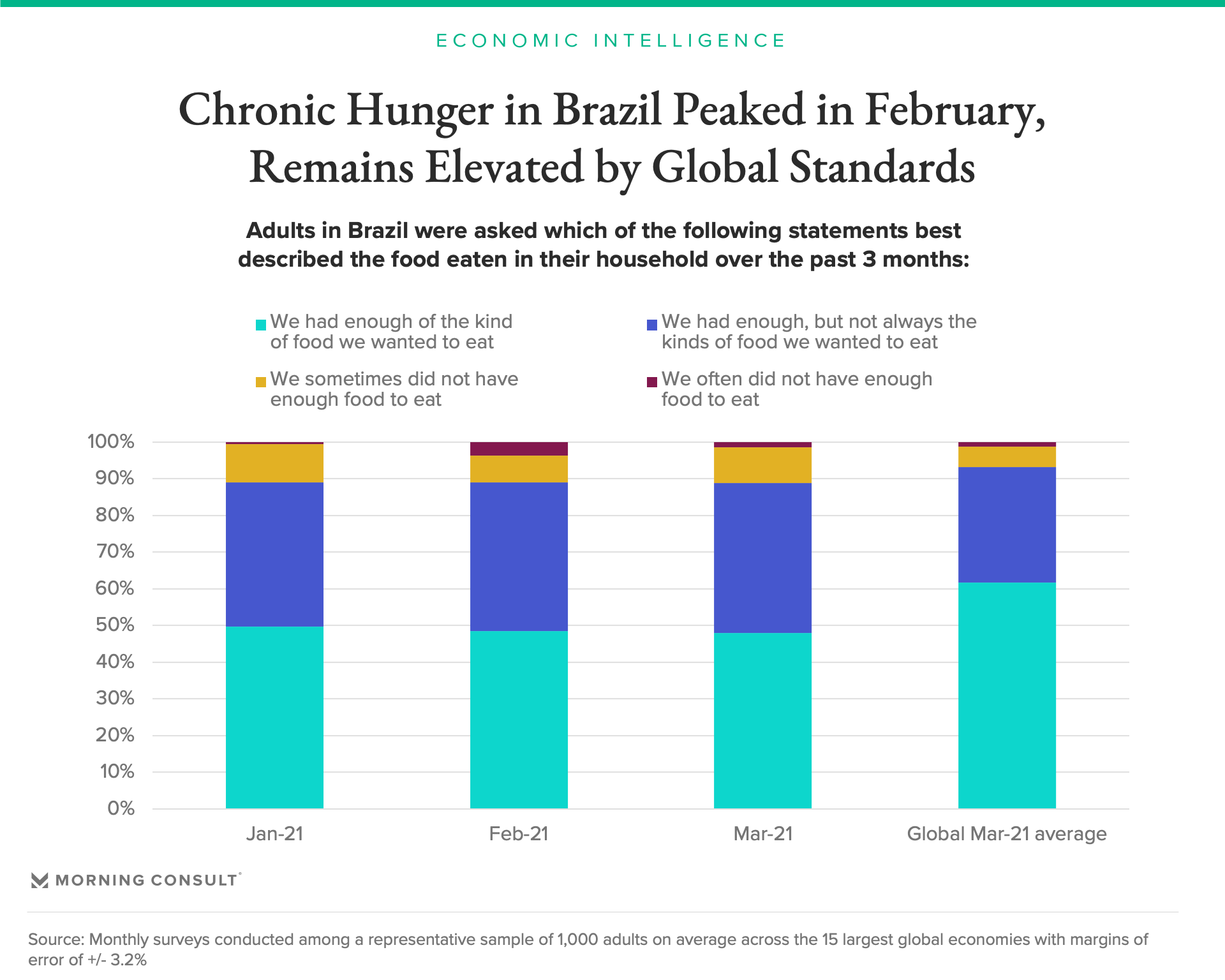 While increasing global demand exerts upward pressure on commodities prices, slowing domestic demand will drive down the cost of domestic goods and services, and Brazilians’ price expectations reflect this reality. Across the 15 largest global economies, Brazil is the only country to increasingly expect the price of new cars to decrease in the next 12 months. This result is consistent with decreases in Brazilians’ assessment of current buying conditions in the country: As fewer Brazilians make large household purchases, the prices of those goods are likely to fall. In general, the harder it is for merchants to export products outside of Brazil, the less likely prices for those products are going to increase. 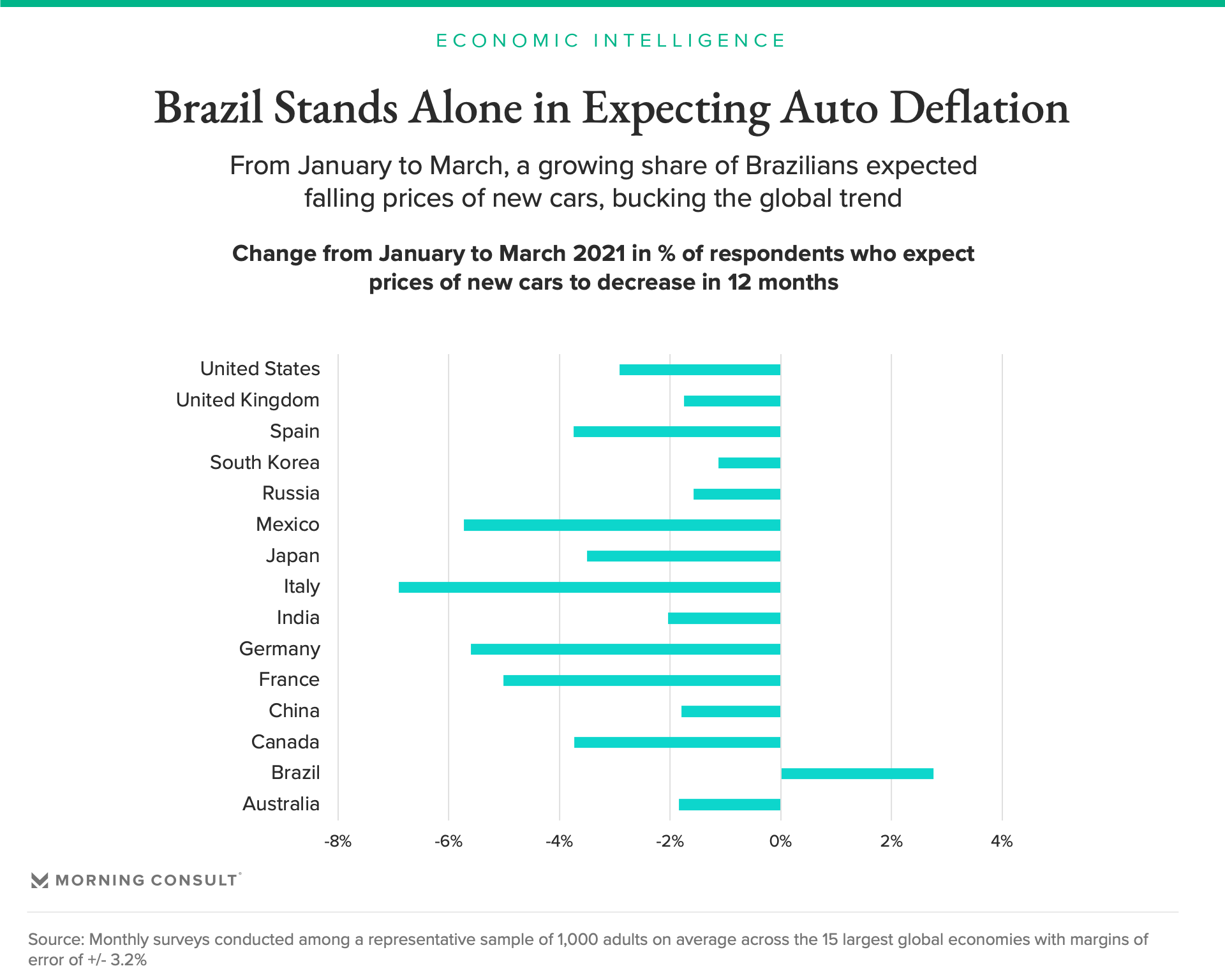 Even as Brazilians increasingly disapprove of Bolsonaro, he remains resistant to imposing additional economic restrictions on the grounds that the economic harm from such restrictions would outweigh the health and economic benefits of doing so. While there are clearly short-term tradeoffs, Morning Consult’s global consumer confidence data has consistently highlighted over the course of the pandemic the necessity of limiting the spread of the virus in order to produce sustainable increases in economic activity.

Weakened personal finances and growing food insecurity have long historical track records of contributing to political unrest and political change, and Bolsonaro’s weakened political position exposes him to his political opponents. As Bolsonaro works to contain the virus and limit its economic effects, his political future hangs in the balance. 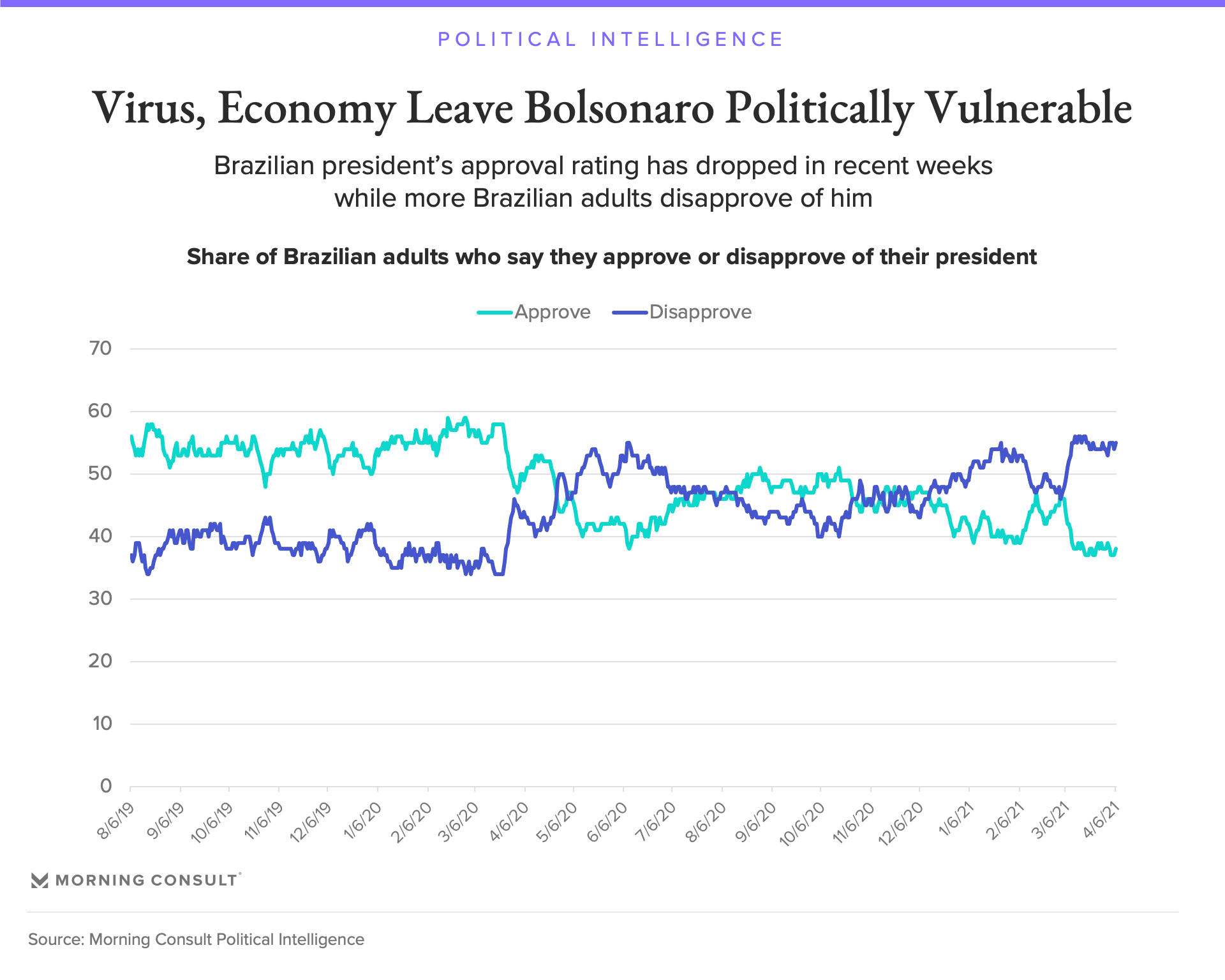