Biden’s Infrastructure Plan Maintains Support From About 3 in 5 Voters, but Republican Backing Takes a Sharp Dive

In a week, support from GOP voters for infrastructure proposal falls 10 points to 25%

Senate Minority Leader Mitch McConnell (R-Ky.), pictured during President Joe Biden’s inaugural address on Jan. 20, 2021, in Washington, D.C., has said that Biden’s infrastructure plan is “an Orwellian campaign to convince everybody that any government policy whatsoever can be labeled ‘infrastructure.’” A Morning Consult/Politico poll found that a majority of voters think most of the items in Biden’s plan can be considered part of America’s infrastructure. (Alex Wong/Getty Images)
By Claire Williams

Republican support for President Joe Biden’s infrastructure plan (and how to pay for it) is quickly waning, according to new Morning Consult/Politico polling, suggesting that GOP messaging around the issue is gaining traction with the party’s base.

Biden’s slate of economic policies, especially his stimulus package, have enjoyed consistently broad support from both Republican and Democratic voters. A repeat of that dynamic on infrastructure now seems increasingly unlikely, as Republican support for Biden’s plan slid to 25 percent, down from 35 percent a week ago. This week’s poll was conducted April 9-12 among 1,992 registered voters. 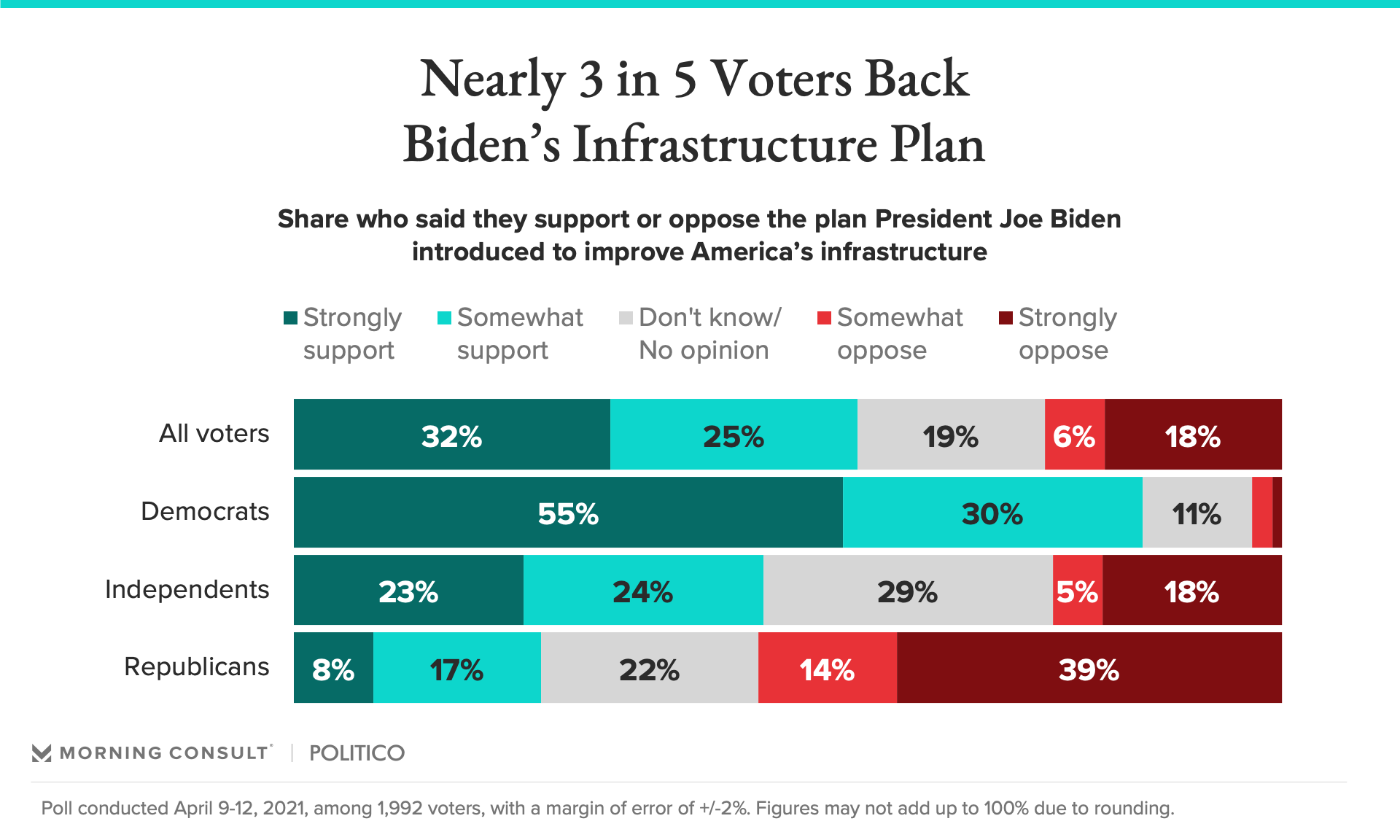 Overall support for Biden’s infrastructure plan fell 3 percentage points (just outside the survey’s 2-point margin of error) to 57 percent.  The plan still has high levels of support among Democrats, with 85 percent in favor.

GOP support dropped even more sharply when the survey asked about Biden’s proposal to fund infrastructure improvements through 15 years of higher taxes on corporations. 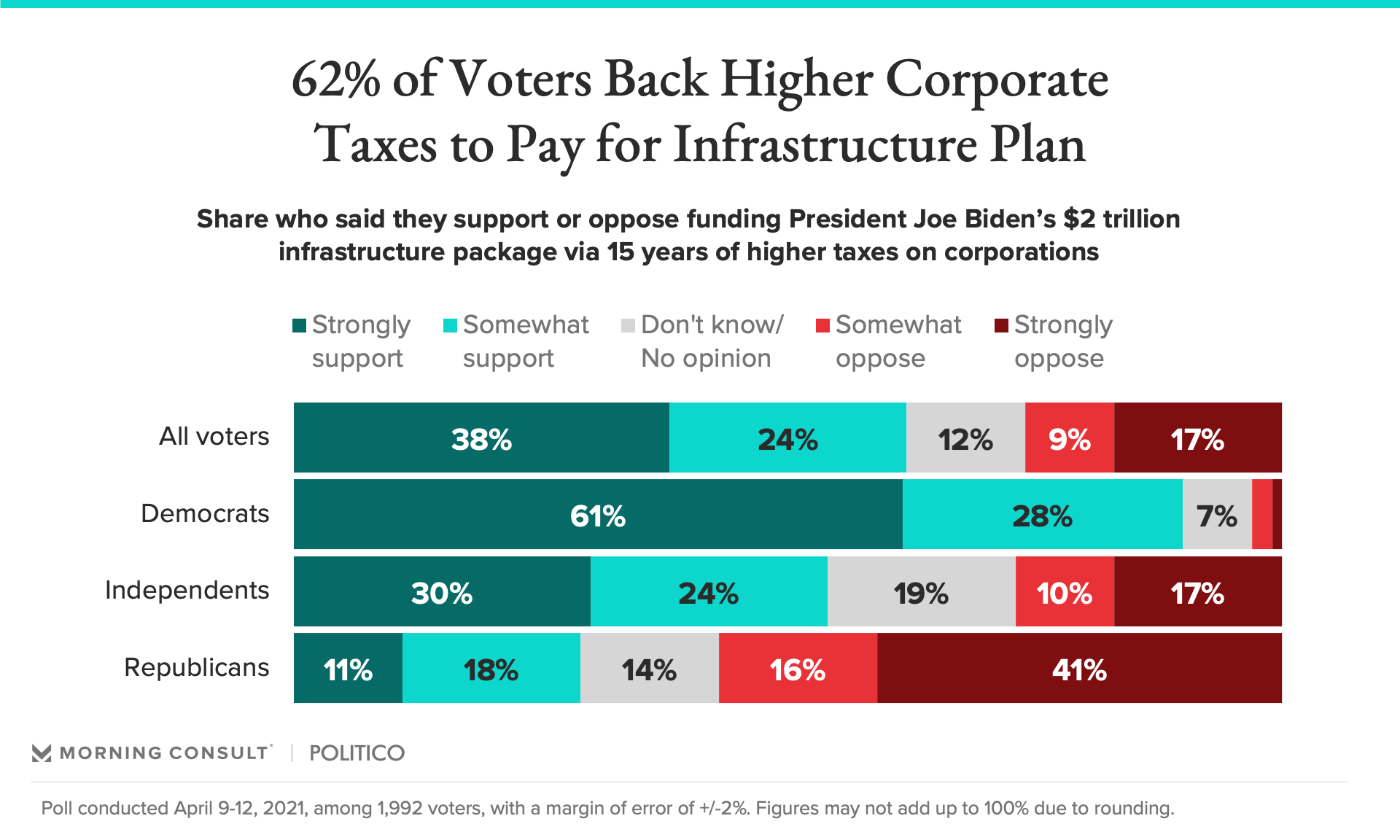 Twenty-nine percent of Republicans this week said that they support the corporate tax increase to pay for Biden’s infrastructure plan, compared to 42 percent last week, a 13-point decline. Support among all voters fell 3 points to 62 percent.

An overwhelming majority (89 percent) of Democrats back the idea of taxing corporations at a higher rate to fund infrastructure improvements.

One of the biggest complaints from Republicans about the package is that it will target areas that are not traditionally included in infrastructure plans, including child care, internet access and housing.

“To automatically say that the only thing that’s infrastructure is a highway, a bridge or whatever, that’s just not rational,” Biden said in a speech. “It really isn’t.”

GOP lawmakers have urged Biden to consider a more targeted, traditional infrastructure package, calling the idea of an expanded definition of infrastructure a way of hiking taxes and passing progressive priorities.

“They’re embarking on an Orwellian campaign to convince everybody that any government policy whatsoever can be labeled ‘infrastructure,’” said Senate Minority Leader Mitch McConnell (R-Ky.).

The survey results suggest that voters might be more favorable to Biden’s argument than McConnell’s. 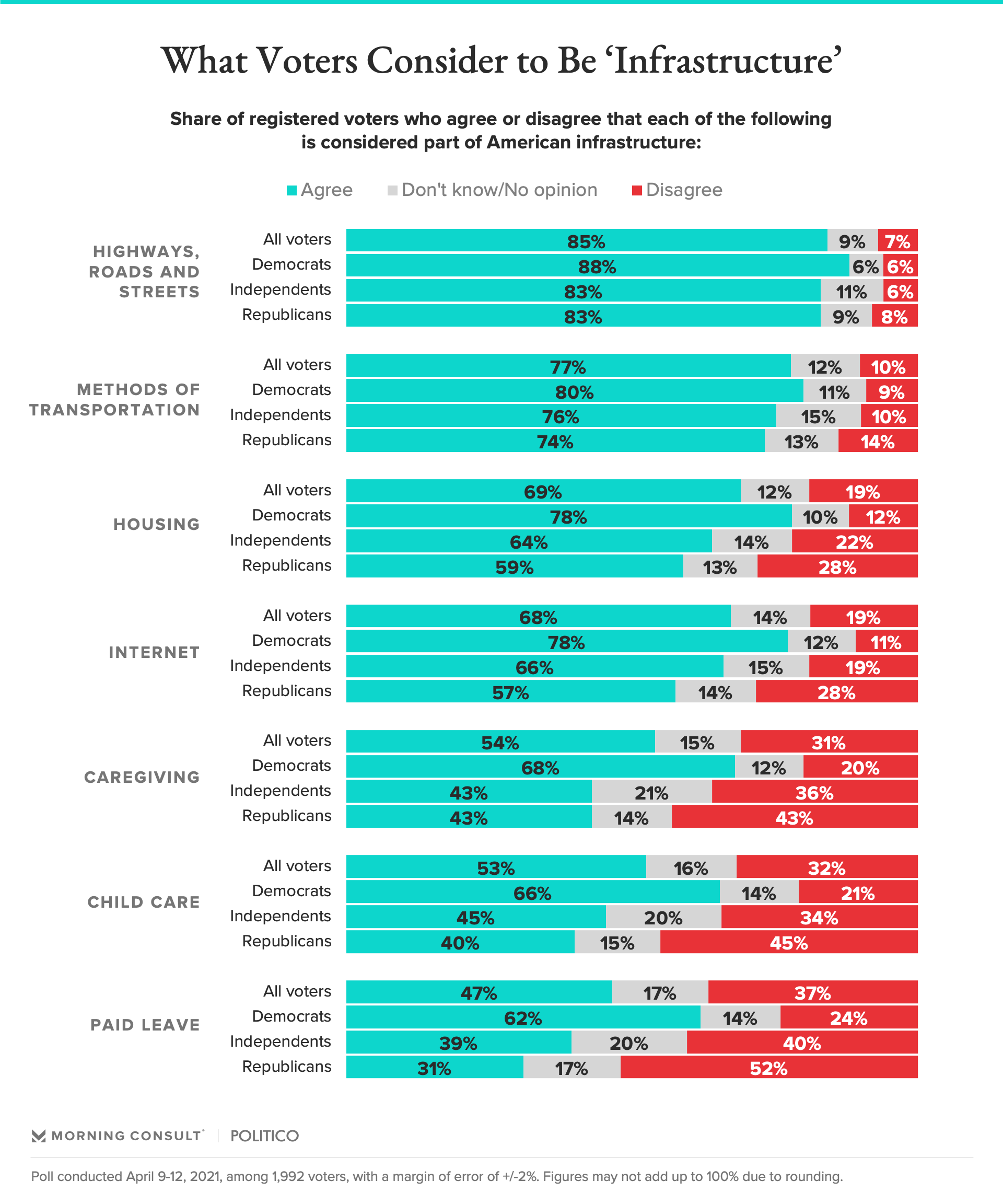 When presented with a host of items included in Biden’s infrastructure plan, a majority of voters agreed that most of them could be considered part of America’s “infrastructure.”

Highways, roads and streets (85 percent) and methods of transportation (77 percent) had the highest share of voters who agreed that those categories are part of U.S. infrastructure. Of the categories listed, only  “paid leave” (at 47 percent agreement) was not considered infrastructure by a  majority of voters.

Some of those less traditional items, including housing and internet, still garnered a majority of Republicans who agreed they were part of American infrastructure, at 59 percent and 57 percent, respectively.

By significant margins, a majority of Democrats agreed that all the items listed are part of the country’s infrastructure.

Related: Raising Taxes on Wealthy Americans and Corporations to Fund Biden’s Infrastructure Plan Is OK With Over 1 in 2 Voters