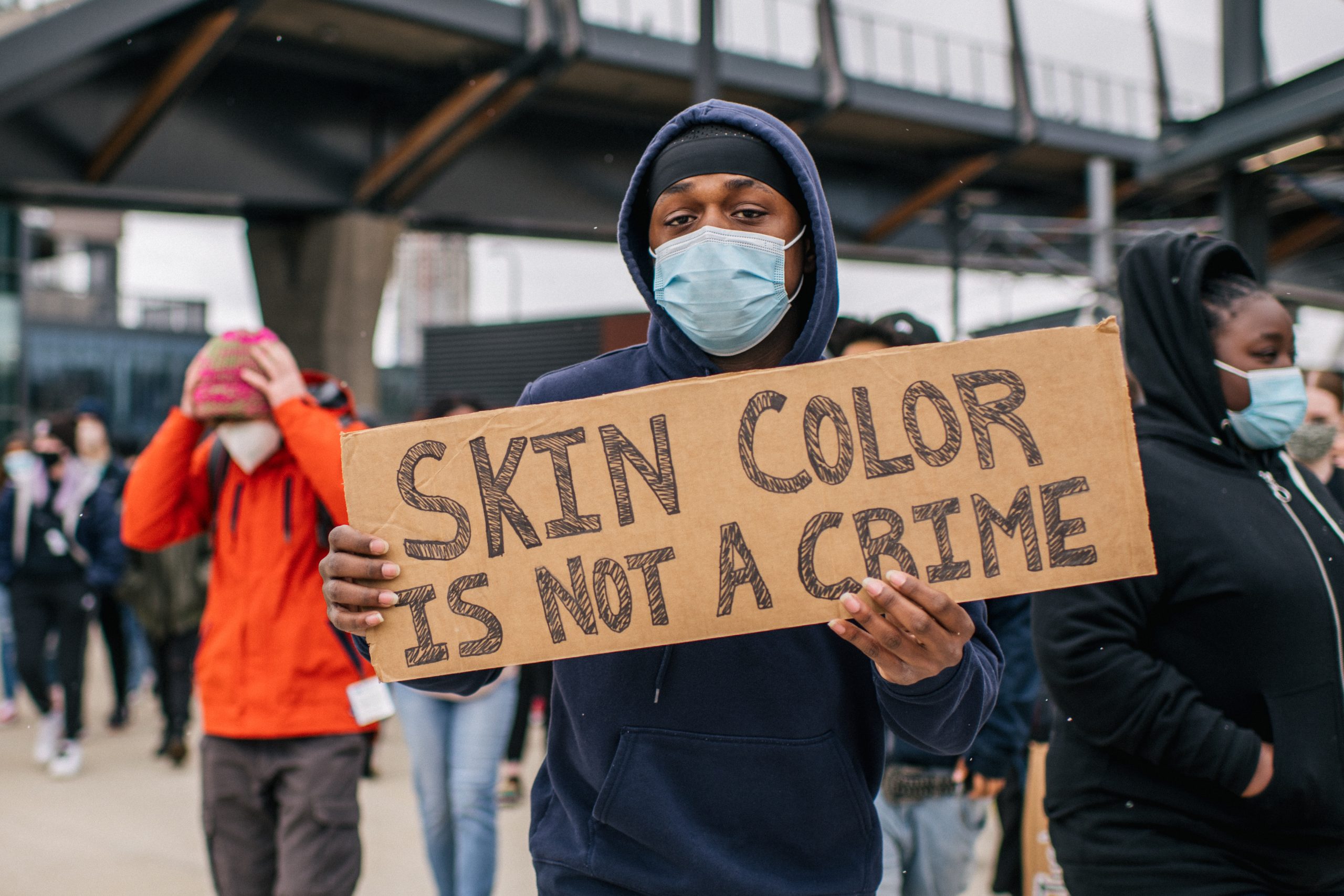 Students from Roosevelt High School in Minneapolis participate in a statewide walkout on April 19 protesting racial injustice following the recent police killing of Daunte Wright and amid the murder trial of Derek Chauvin, the former police officer accused of killing George Floyd last year. With closing arguments in the case being delivered today, new Morning Consult polling shows Republicans driving a decrease in the share of white Americans who believe that police violence against the public is a serious problem. (Brandon Bell/Getty Images)
By Eli Yokley

Last summer, many Americans reacted to the death of George Floyd with at least the appearance of allyship, with a number of everyday Republicans recognizing Black Americans’ calls to stop police-involved violence against people of color in polling conducted at the time.

But nearly a year later – as Derek Chauvin, the former Minneapolis police officer accused of murdering Floyd, stands trial and details emerge about new police shootings of Daunte Wright in Brooklyn Center, Minn., and Adam Toledo in Chicago – Republicans are driving a drop in the share of Americans who consider police violence against civilians to be a serious problem, expanding racial rifts in the public’s views of the root causes and how to address the issue.

According to a new Morning Consult survey, conducted April 15-19, 69 percent of U.S. adults view police violence against the public as a “very” or “somewhat” serious problem in the country – down 10 percentage points since a survey conducted shortly after Floyd’s death. The share is also lower than in a July 2016 poll conducted following the shootings of Philando Castile in the Minneapolis area and Alton Sterling in Baton Rouge, La. Each poll had a 2-point margin of error. 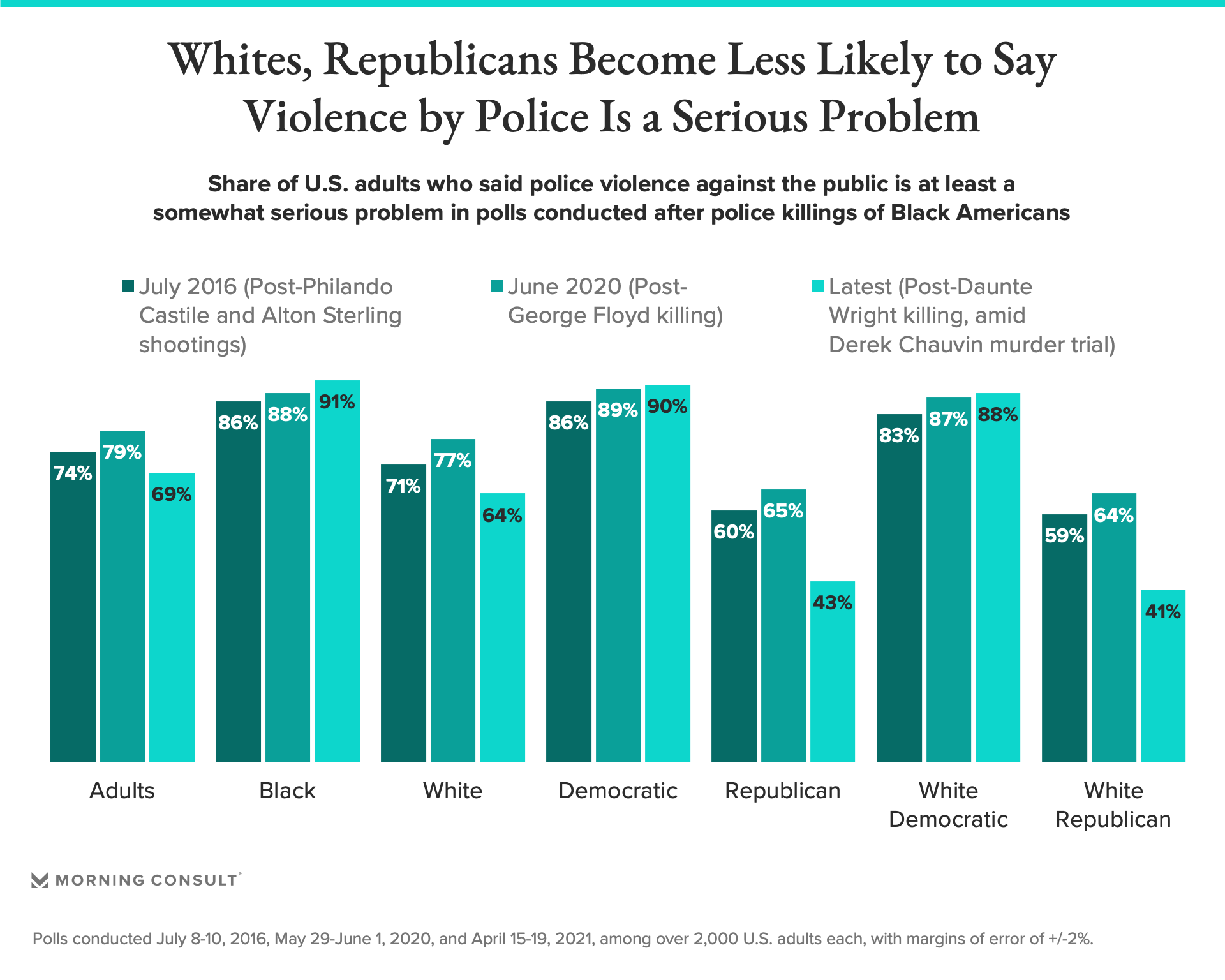 As Democrats and Black Americans increasingly cast police violence as a grave issue, the declining threat perception among the broader population is fueled by shifting views among white Republicans: 41 percent view police violence as a serious problem, down 18 points since 2016, while the share of white Democrats who said the same has increased slightly over that time frame to 88 percent.

As a whole, Democrats and Black people are twice as likely as Republicans to see police violence as a serious problem, and the share of GOP adults who describe racial discrimination against Black people as “one of the biggest problems facing America today” has fallen 10 points from last summer.

That divide also shows itself in responses regarding how much information about the latest events is reaching the American public. 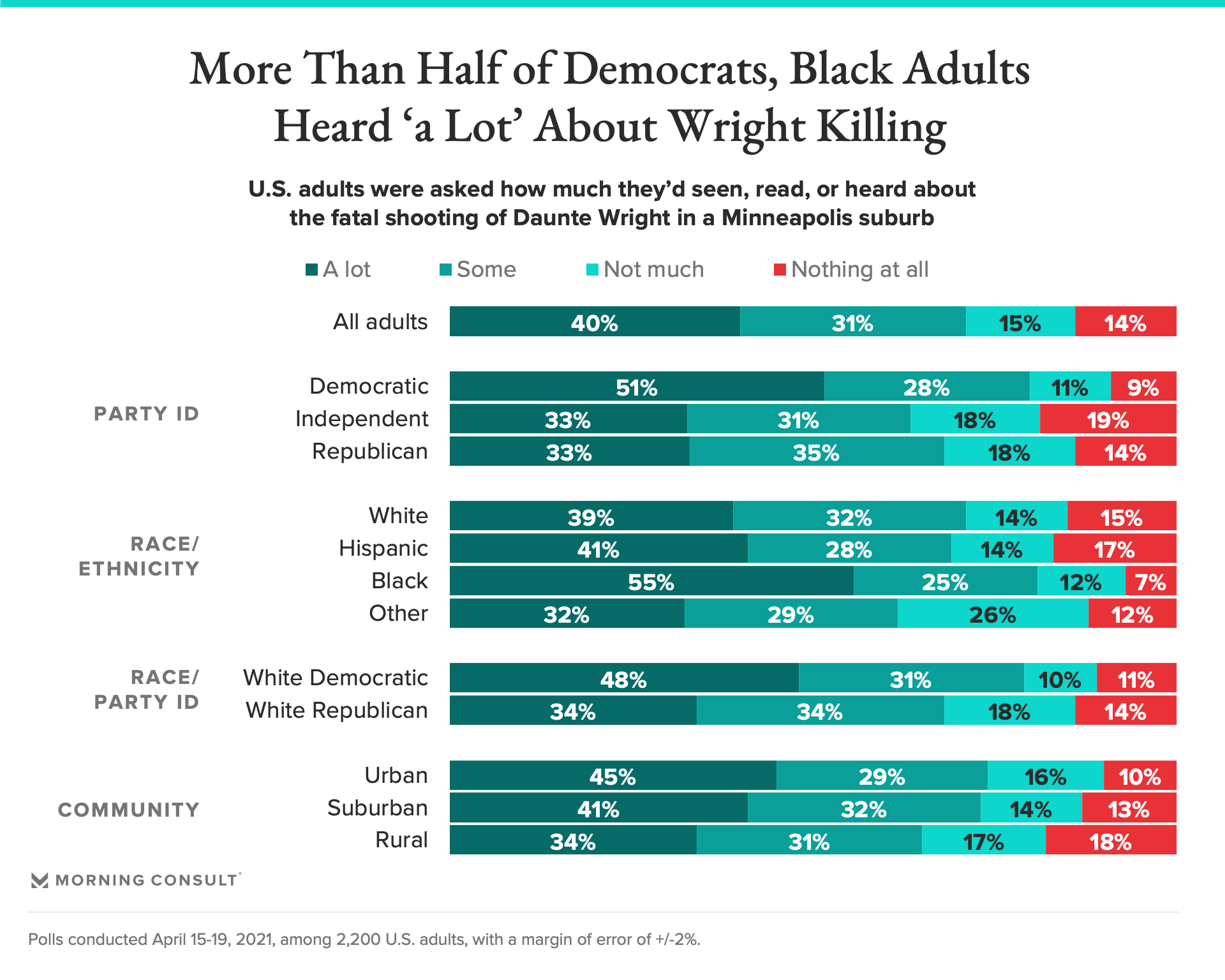 According to the survey of 2,200 U.S. adults, 2 in 5 respondents said they’d seen, read or heard “a lot” about the fatal shooting of Wright, including roughly half of Democratic and Black adults but just a third of Republicans and 39 percent of white adults. Similar splits appeared in the share of adults who reported hearing “a lot” about the Chauvin murder trial, though respondents were generally more likely to say they’ve consumed news about the topic.

Amid protests outside Minneapolis, local officials in Brooklyn Center announced the resignations of Police Chief Tim Gannon and Officer Kim Potter, who fatally shot Wright during a traffic stop where she suggested she mistook her firearm for her Taser. Potter’s resignation has wide public support – including among Republicans – but partisans are split on what they think should happen next. 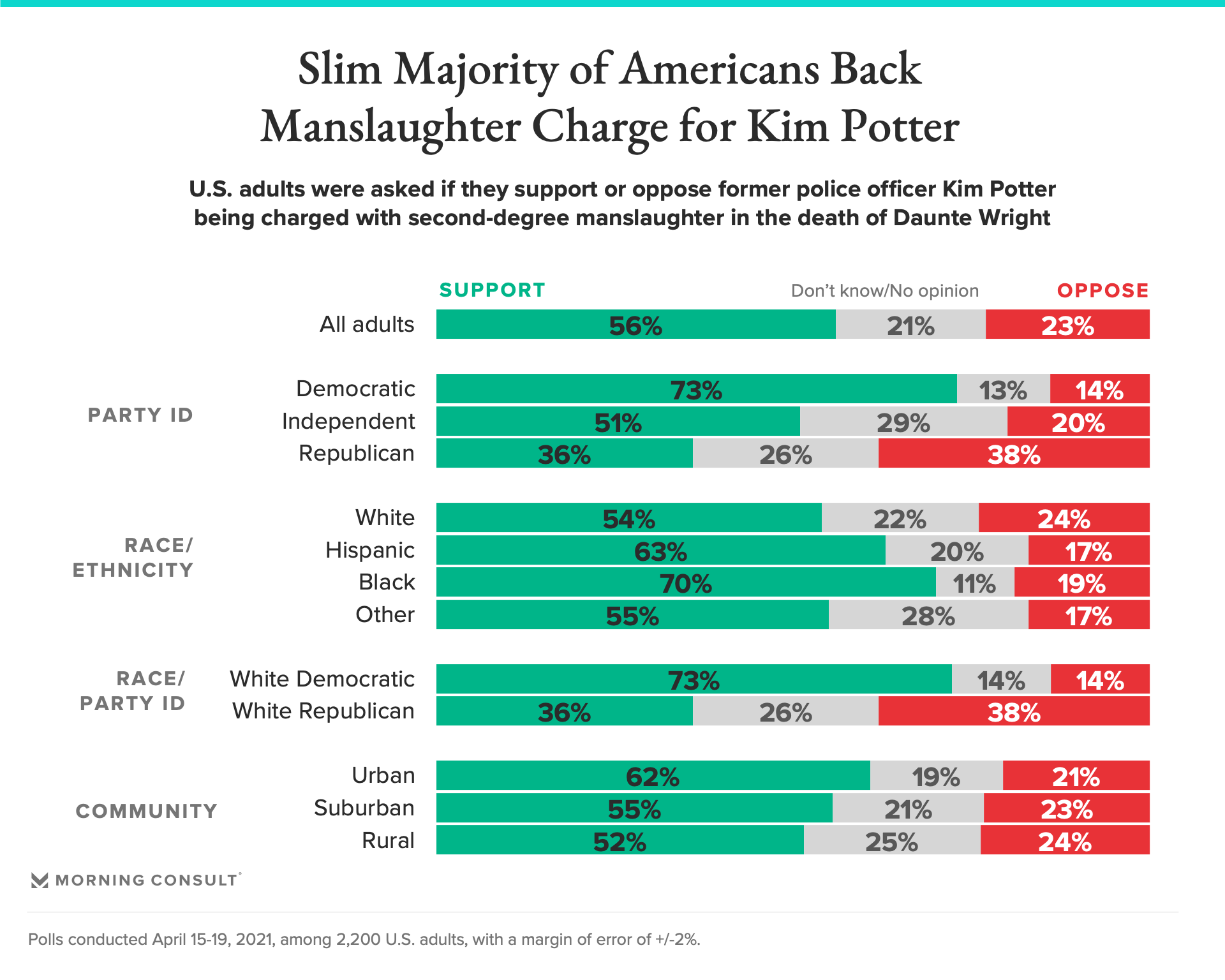 Over half of Americans (56 percent) — including 7 in 10 Black adults and 54 percent of white adults — said they support the decision by a local prosecutor to charge Potter with second-degree manslaughter, a crime of negligence under Minnesota law. Nearly 3 in 4 Democrats back the charge, while Republicans are almost evenly divided, with 36 percent in support and 38 percent opposed.

Potter’s actions – virtually impossible to decouple from the context of the ongoing Chauvin trial in nearby Minneapolis – raised questions about whether police officers are making mistakes or acting with malice in their harmful interactions with Americans. Those questions are key to how and whether law enforcement officers will be charged or convicted for harming or killing members of the public, and generally elicit stark divides among Americans when accounting for race and partisan affiliation. 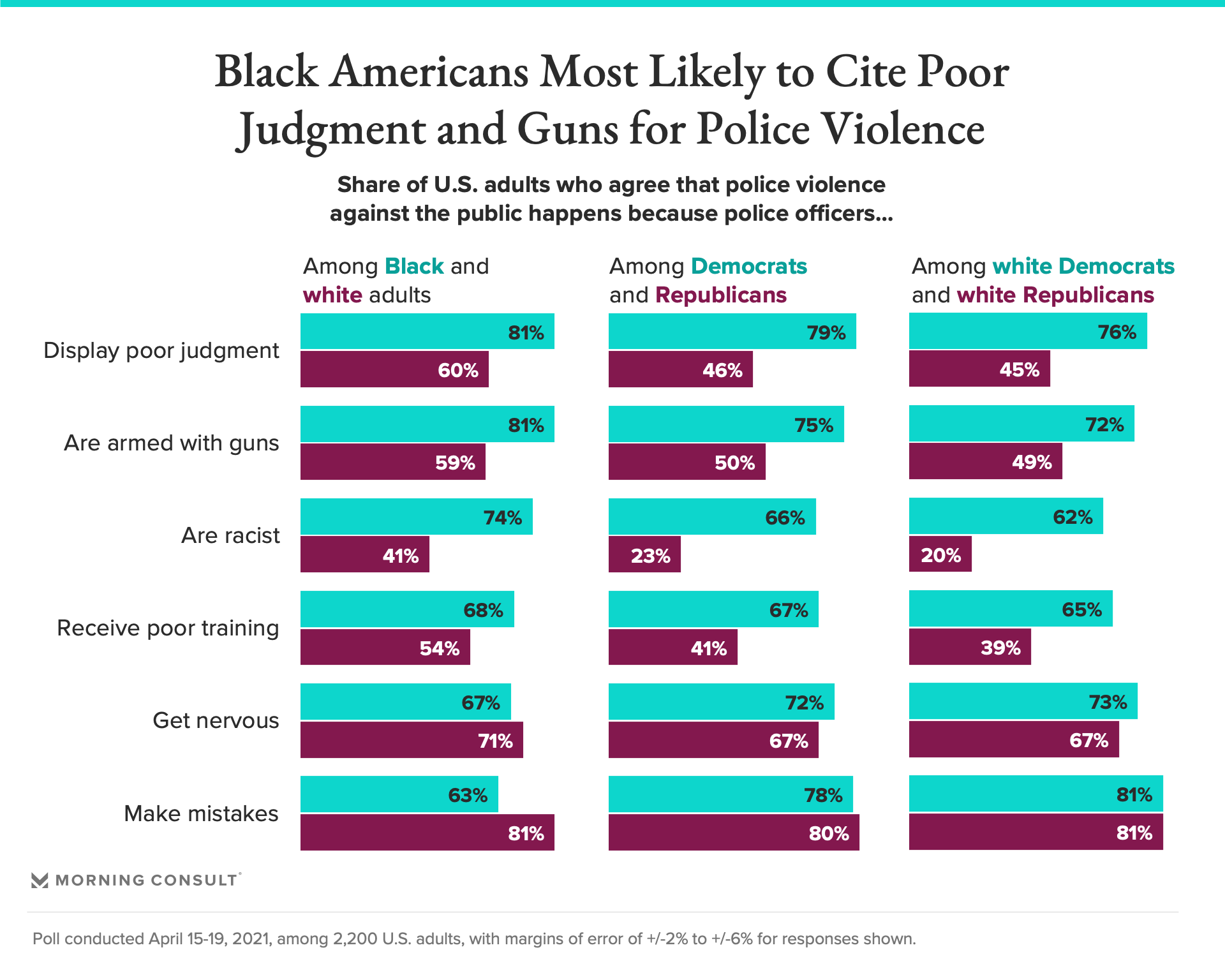 With the resurgence of Black Lives Matter protests likely on the horizon given the latest incidents and the pending outcome of the Chauvin trial, calls to “defund the police” are also resurfacing after the organic slogan from the 2020 demonstrations was wielded by Republicans against Democrats on the campaign trail.

According to the new polling, support for defunding the police rests on weak political ground. 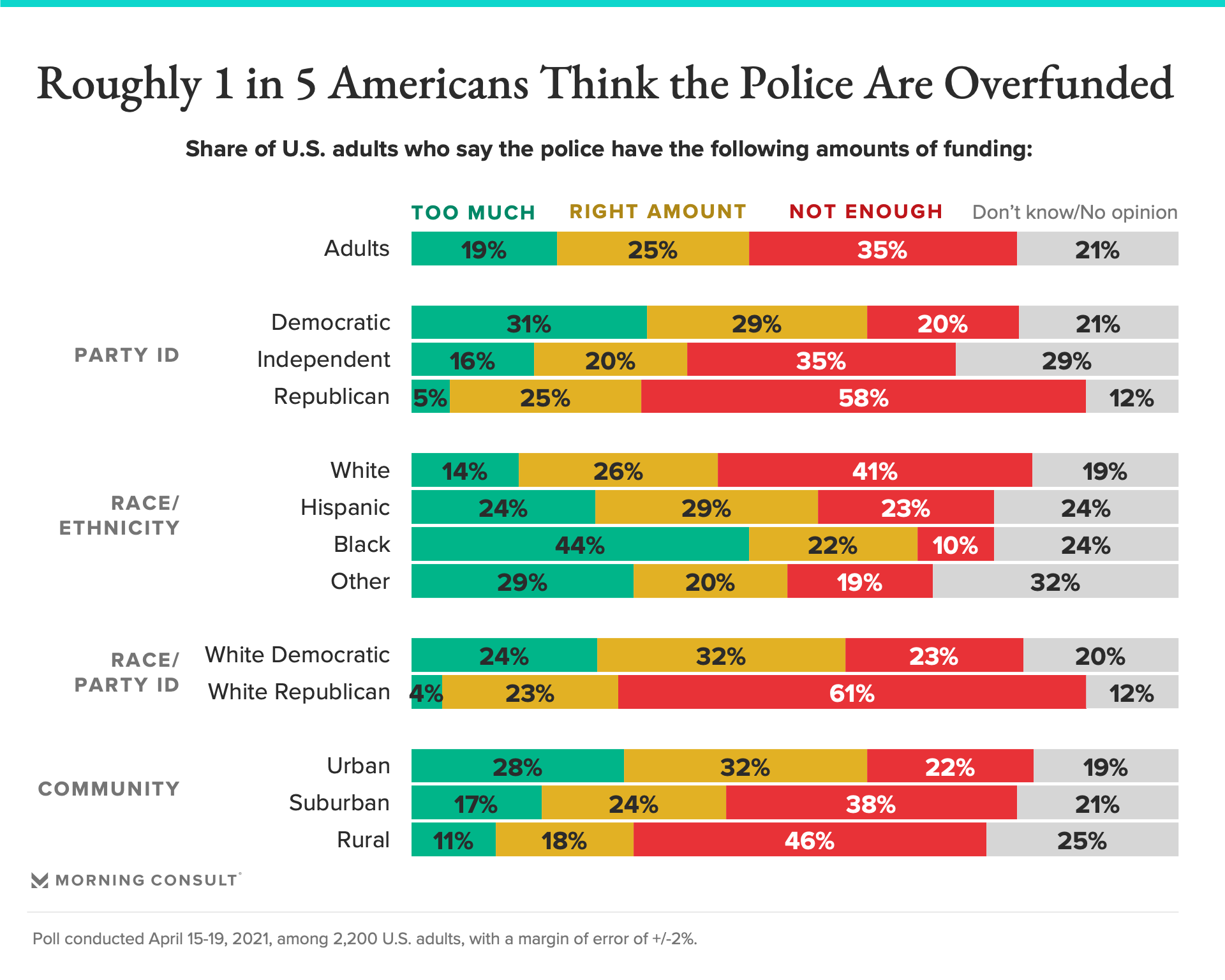 However, the issue has the potential to fracture the Democratic Party between two voting blocs that could be key in the midterm elections: While a 38 percent plurality of suburbanites say the police do not have enough money, a 44 percent plurality of Black Americans says departments are overfunded.