Support for D.C. Statehood Is Lukewarm, but Many Voters Haven’t Made Up Their Minds

40% of voters back making the District of Columbia a state; 32% are opposed 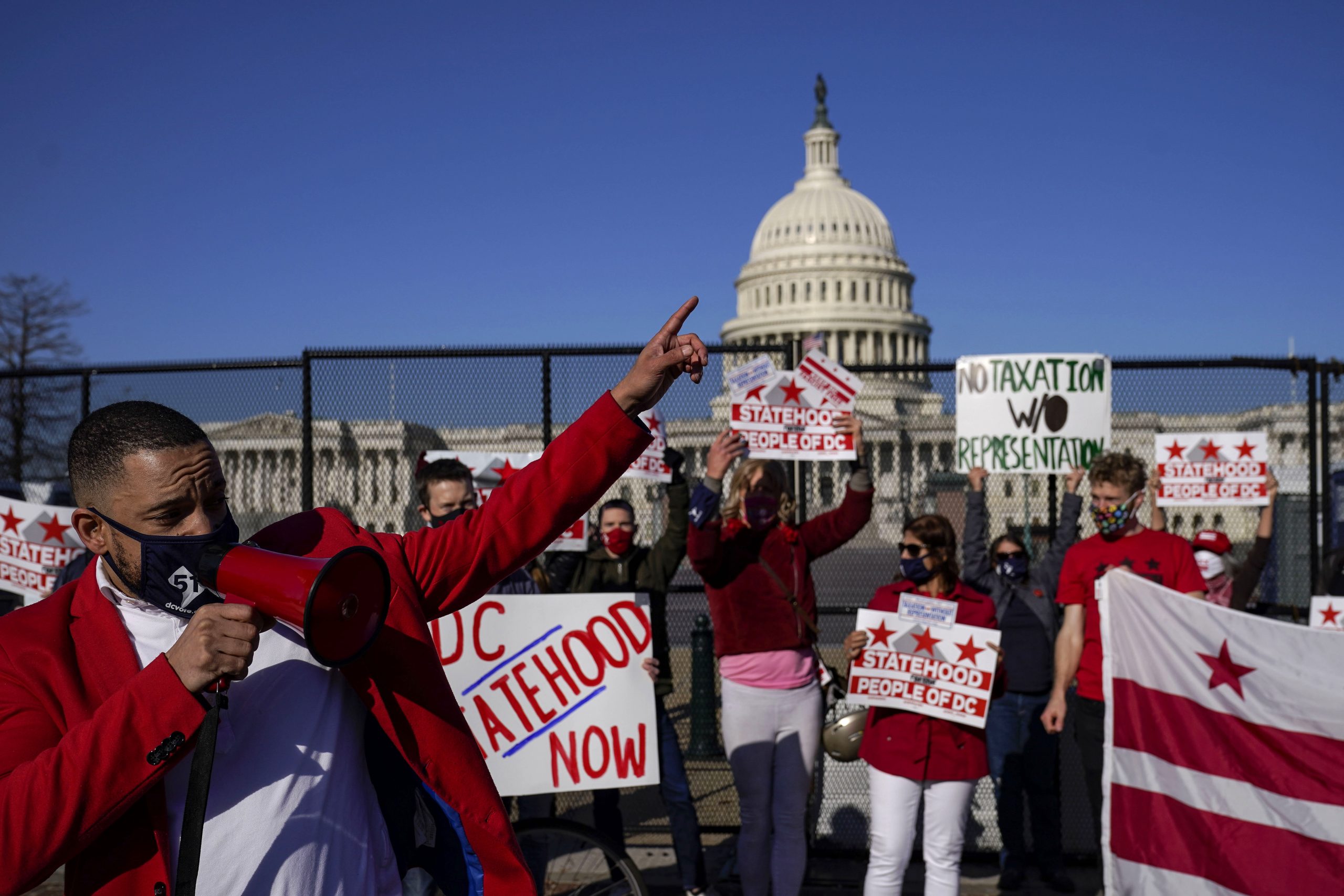 Residents of the District of Columbia rally for statehood near the U.S. Capitol on March 22. As the House prepares to vote to made D.C. a state for the second time in two years, a new poll shows the electorate is divided over the topic, with an ample share of Americans undecided. (Drew Angerer/Getty Images)
By Eli Yokley

The House is set to vote this week to make the District of Columbia the 51st state for the second time in as many years, giving statehood advocates what may feel like momentum. But outside the confines of the House Democratic Caucus, polling shows public support for admitting the would-be state of “Washington, Douglass Commonwealth” into the union is lukewarm at best.

According to a new Morning Consult/Politico poll, 40 percent of voters — including 62 percent of Democrats — support D.C. statehood, while 32 percent oppose it, including 59 percent of Republicans. 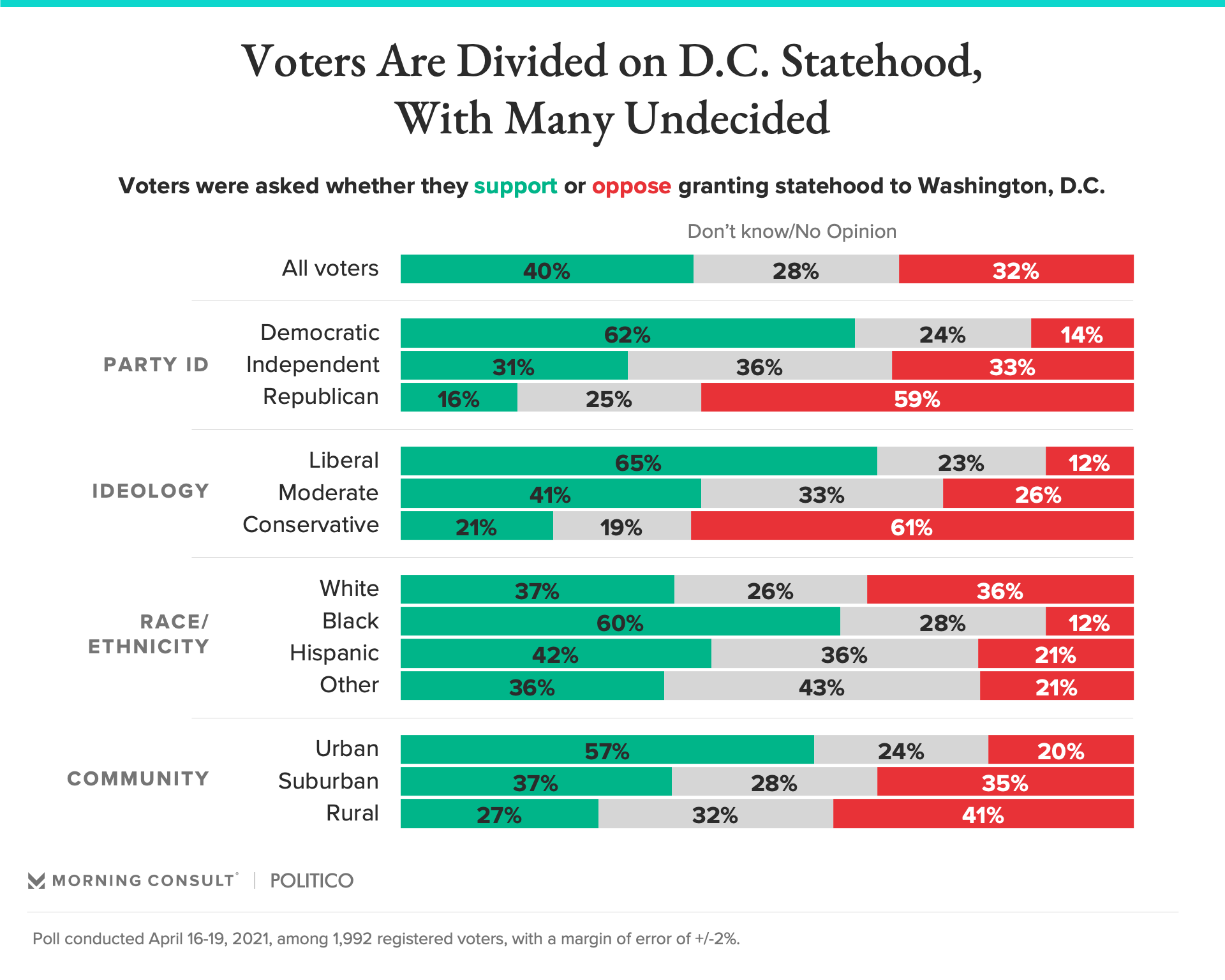 Roughly 3 in 10 voters, fueled largely by independents, are undecided on the question, suggesting ample room for persuasion as the issue faces near-certain demise in the Senate due in part to the legislative filibuster. The survey, conducted April 16-19 among 1,992 registered voters, posed a number of arguments both for and against statehood in order to gauge what contentions could sway voters.

Among those who were undecided about whether to admit D.C. as a state, about a quarter each identified the fact that residents of the district pay federal taxes without having voting representation in Congress and that its population is larger than those of two current states, Vermont and Wyoming, as reasons to support statehood.

“The ramifications are mind-boggling with two new Senate seats,” Rep. James Comer (R-Ky.) said Tuesday during a House Rules Committee hearing on H.R. 51. “I wonder if we would even be having this discussion if Joe Manchin were going along with everything – if he’d agree to end the filibuster.”

Among Republican elected officials, partisan arguments often take precedence over those framed around the city’s small population compared to many other states or originalist arguments regarding its proximity to federal power and the Founding Fathers’ initial intentions of independence for the District.

But the poll finds evidence that those originalist arguments resonate more deeply with statehood opponents in the electorate than those of the partisan variety: 3 in 4 voters who oppose statehood said Congress should not grant it because D.C. was never meant to be a state, while just 17 percent framed their opposition on the grounds that the move would help Democrats.

Democratic Rep. Jamie Raskin, a proponent of statehood who represents a Maryland district that borders the capital, said the push to admit Washington into the union is part of a long “trajectory of political inclusion” for Americans, and suggested there might be room for compromise between the two parties in coupling statehood for the District with the admission of Puerto Rico, an American territory whose ratification as a U.S. state was supported by the latest version of the Republican Party’s platform.

Roughly a quarter of Republican voters (26 percent) support statehood for Puerto Rico, 10 percentage points higher than the share who support the status for the District of Columbia, though a majority (52 percent) still oppose the idea. While Democrats support statehood for both places equally, independent voters are 9 points more likely to support Puerto Rico statehood than to back making D.C. a state, 40 percent to 31 percent. 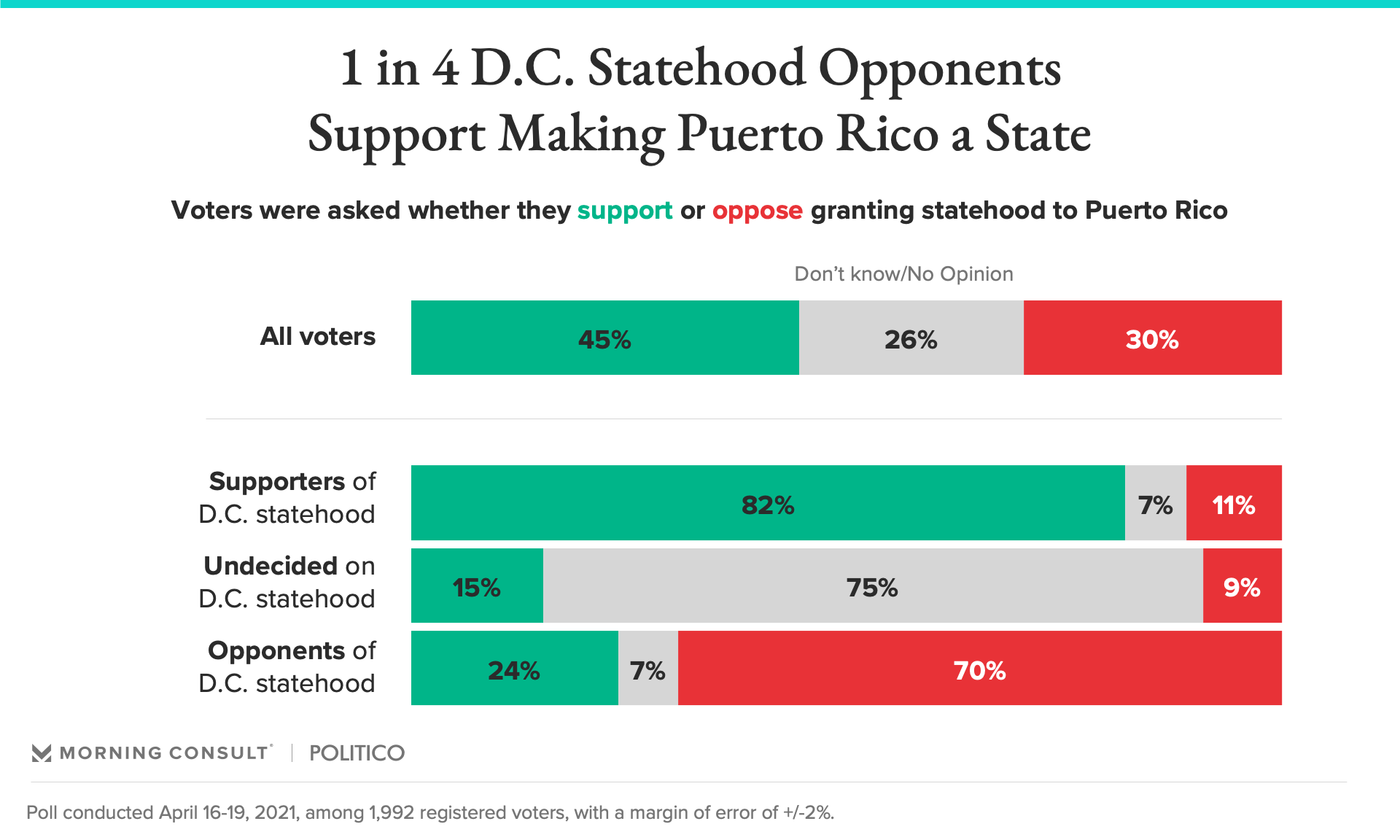 Overall, 45 percent of voters support Puerto Rico statehood, and among those who oppose statehood for D.C., 24 percent said they would support the introduction of the Caribbean island into the union.