Americans Are Divided on How Brands Should Respond to Chauvin Verdict, Predominantly Believe Statements Are Not Genuine 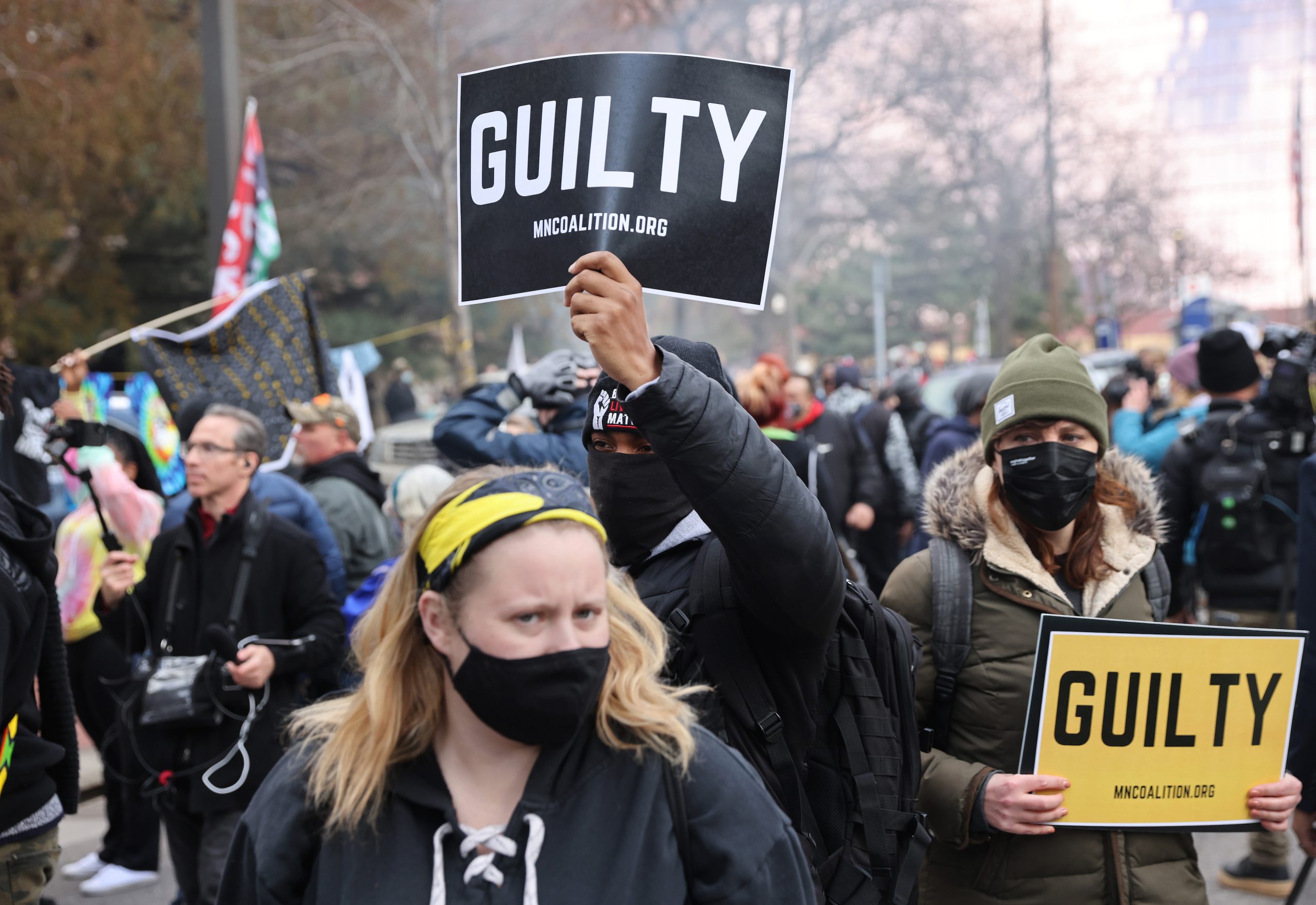 People in Minneapolis, Minn., react after the verdict was read in the Derek Chauvin trial on Tuesday. Forty-nine percent of consumers said they would feel less favorably about companies that oppose the Chauvin verdict, according to Morning Consult data. (Scott Olson / Getty Images)
By Alyssa Meyers

After a jury this week found former Minneapolis police officer Derek Chauvin guilty of murdering George Floyd, several major corporations and executives quickly released statements about the verdict, but brands generally didn’t speak out en masse as they did last summer in the immediate aftermath of Floyd’s death.

That hesitation likely reflects the difficult position that companies find themselves in when trying to please consumers, who are fairly evenly split on how they think brands should respond to the Chauvin verdict, according to new polling from Morning Consult.

Most American consumers do, however, continue to share the belief that brands who voice support for Black Lives Matter do so because they are concerned by the prospect of losing customers, and not because they truly care about the movement.

Morning Consult asked 2,200 U.S. adults to reflect on different kinds of statements brands might make in light of the Chauvin verdict. Brands that speak out in support of the Black Lives Matter movement, as many have attempted to do in the past year, are more likely to be seen in a positive than negative light, with the exception of a few demographics. 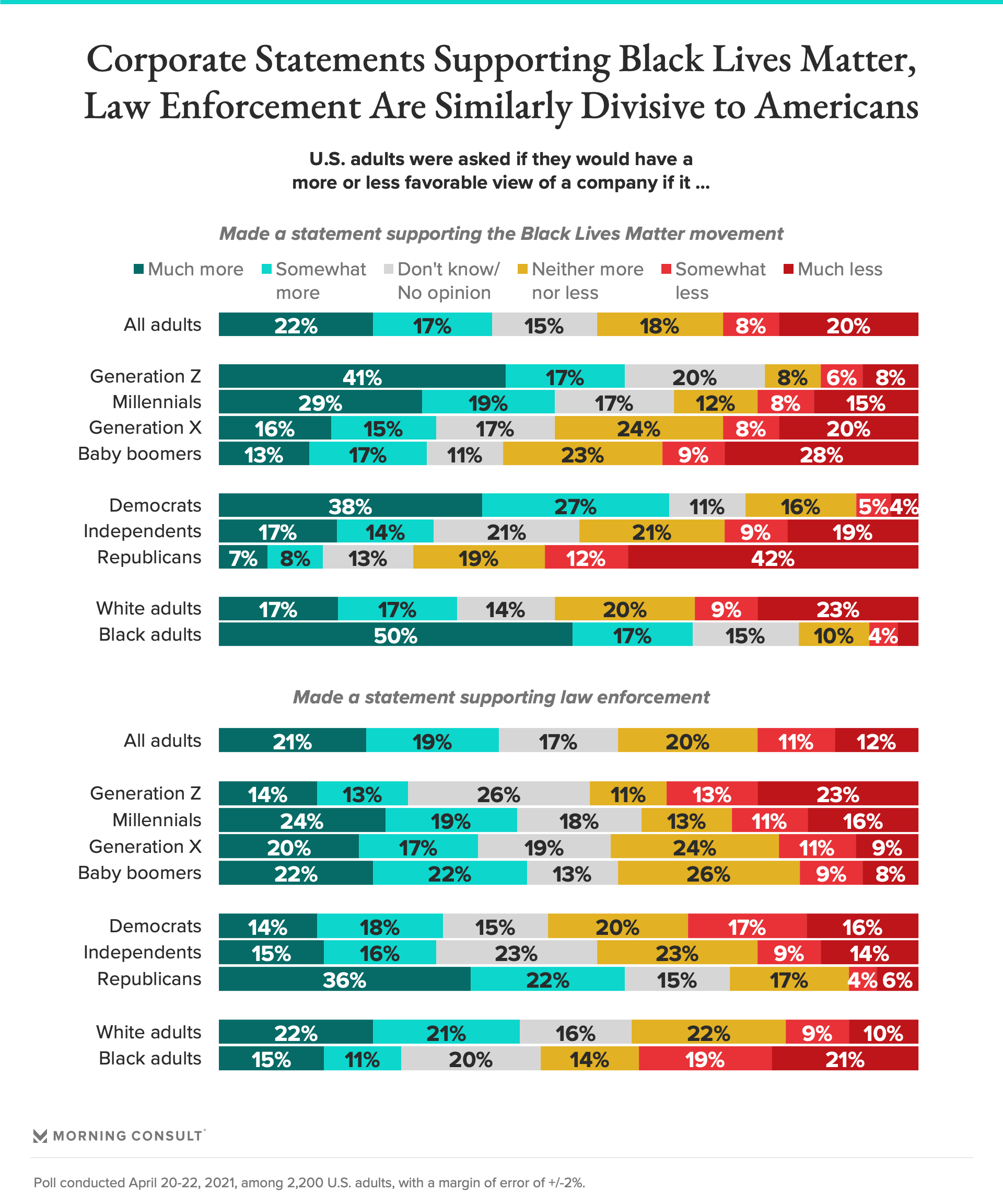 Independents, white Americans and consumers in older generations are fairly evenly split on the matter. And about half (54 percent) of Republicans said they would think less favorably about brands that released a statement in support of BLM, compared with 15 percent who said they would appreciate such a move.

Thirty-nine percent of all adults said they would look more favorably upon brands that released statements supporting the movement, while 28 percent said the opposite.

Much larger shares of Democrats said brand support for BLM increases their favorability than the shares who said the opposite, but the group is more divided when it comes to statements supporting the police.

Related: Brands Are Getting Involved in the Black Lives Matter Movement. Here’s How Black Consumers Want to See Them Participate

Republicans feel strongly about both types of statements, with 58 percent saying they would feel more favorably about brands that stand with law enforcement, while only 10 percent said they’d feel less favorable.

Some statements — such as general comments about the verdict, support of the verdict or no statement at all — resulted in about just as many consumers saying they would view a brand more favorably as less favorably.

Statements opposing the verdict, however, are much more likely to result in an unfavorable response: Roughly half (49 percent) of Americans said they would feel less favorably toward a company that released that sort of comment, compared with just 15 percent who said they would see that brand more favorably. 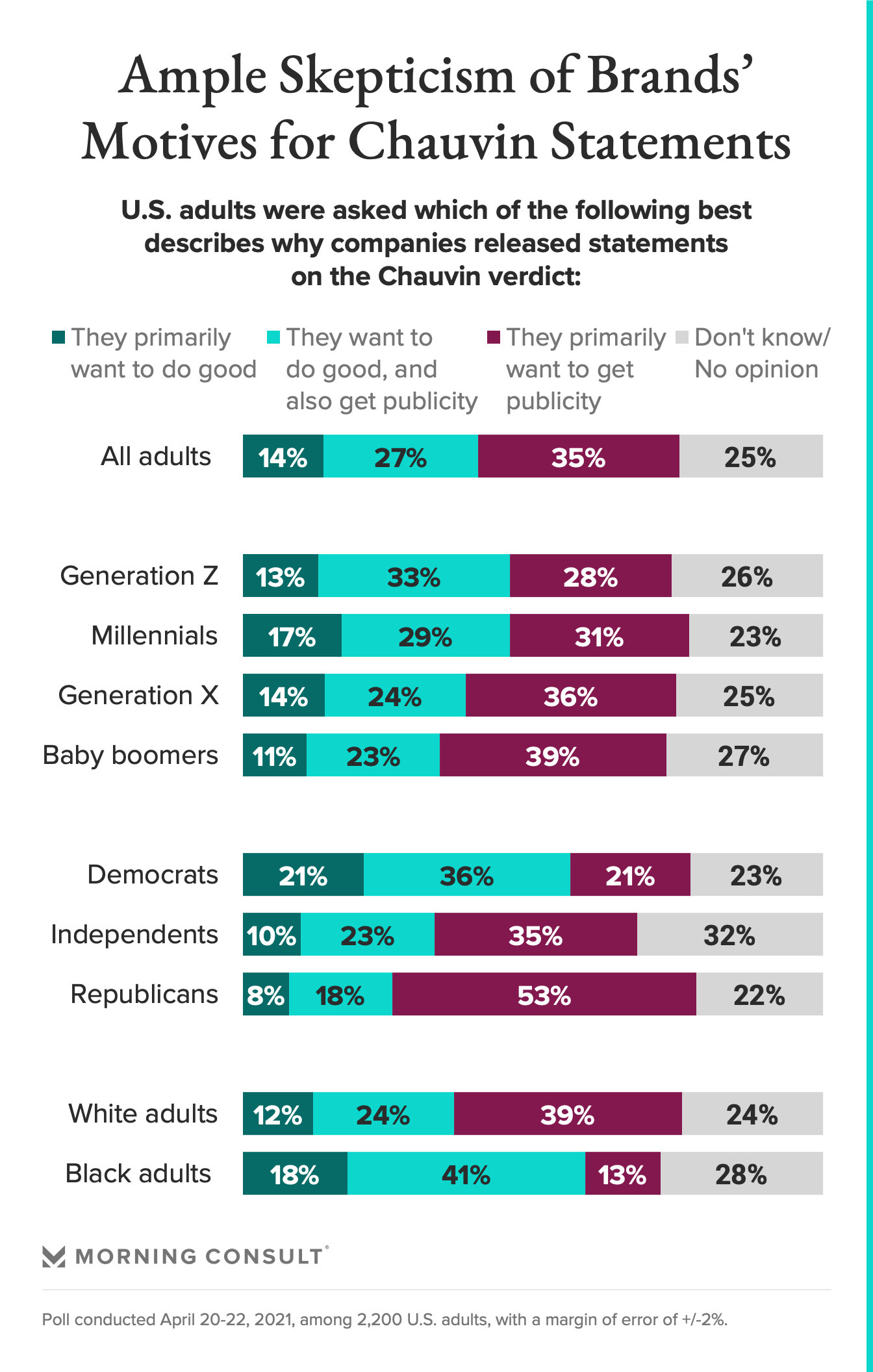 As is the case with most political and social topics, brands often walk a fine line attempting not to alienate or upset their customers.

Some may come under fire for staying silent, a move that most Americans opposed with regard to BLM in a Morning Consult poll from June. Others have been criticized online for involving themselves in issues that some consumers think are better left alone by corporate America. And with people so divided on the matter, especially between political parties, making a timely, topical statement can seem like a lose-lose situation.

Even after a year of navigating this terrain, brands have still largely not convinced consumers of their sincerity when it comes to social justice. Last year, 65 percent of adults said they thought brands were only making statements about BLM because they didn’t want to lose business. As of Morning Consult’s latest survey, that share (64 percent) barely budged.

Many feel the same when it comes to statements about the Chauvin verdict in particular. More than one-third of respondents said brands are mainly addressing it in order to get good publicity, compared with 14 percent who said brands primarily want to do good, and roughly one-quarter (27 percent) who said they think companies are likely motivated by both factors.