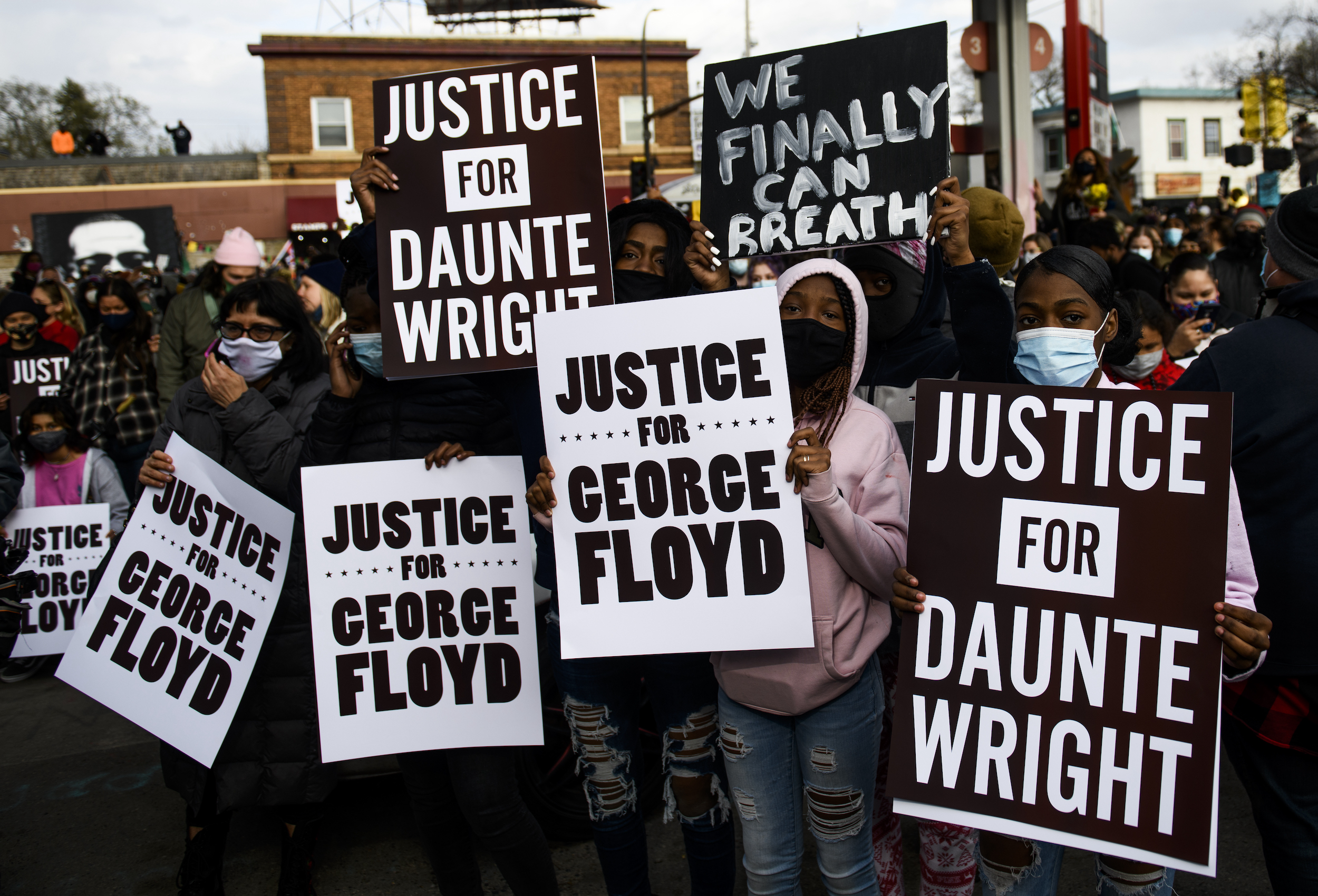 People celebrate at George Floyd Square in Minneapolis after the guilty verdict in the Derek Chauvin trial on Tuesday. New polling shows nearly 4 in 5 U.S. adults approve of the jury's decision, though slightly fewer say it represents justice for Floyd. (Photo by Stephen Maturen/Getty Images)
By Eli Yokley

According to a new Morning Consult survey conducted April 20-22 after the decision was revealed, 77 percent of U.S. adults – including 91 percent of Black and 3 in 4 white Americans – approve of the verdict that Chauvin was guilty of second- and third-degree murder and second-degree manslaughter in the death of Floyd, while 14 percent disapprove. 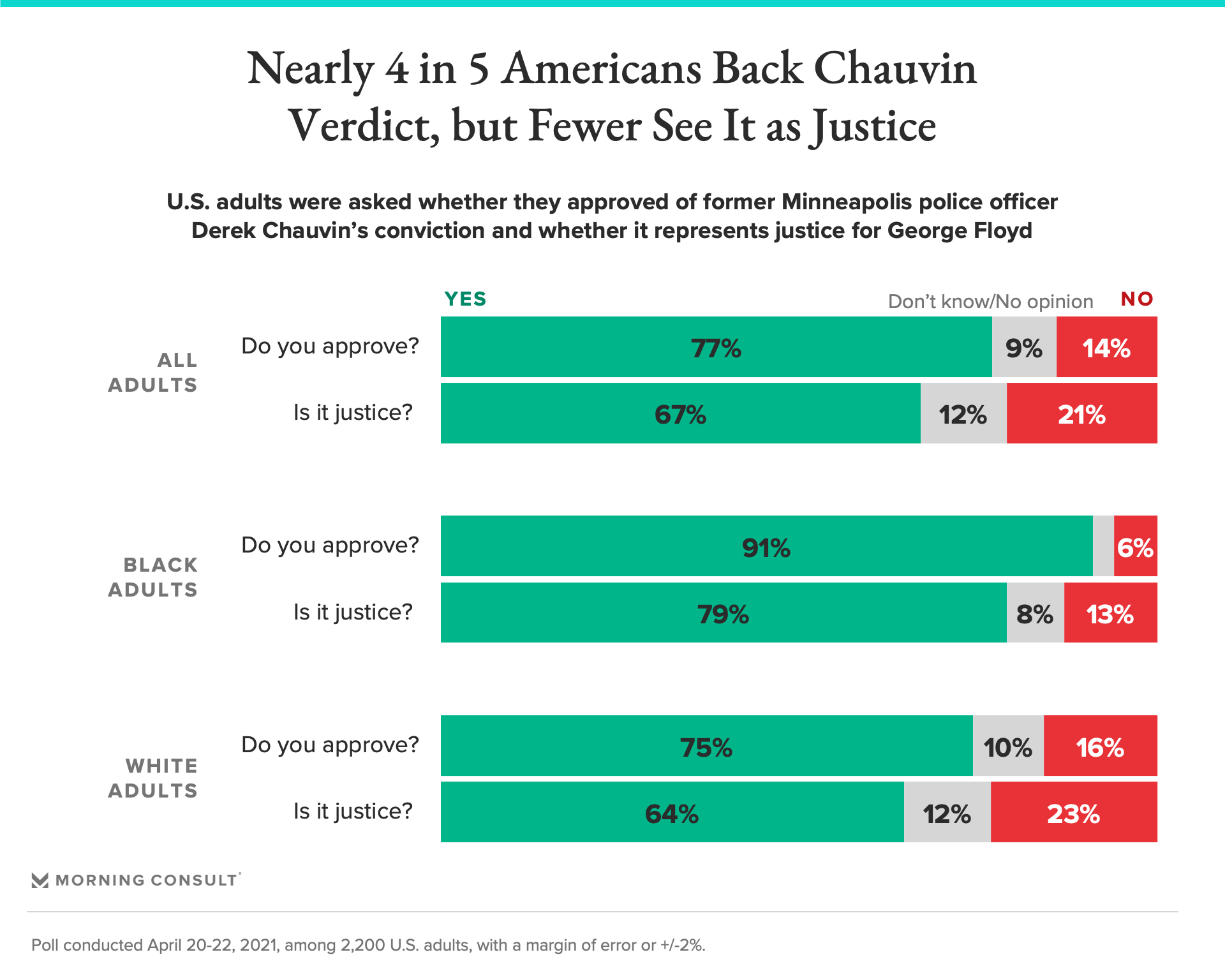 But when Americans were asked whether the decision represents “justice” for Floyd, 67 percent of adults agreed, 10 percentage points fewer than the share who approve of his conviction. The gap was driven by double-digit drops among both white and Black adults, though the latter group was 15 points more likely than the former to say that the decision represented justice for Floyd.

The disparity between the share who approve of the decision and those who say it represents justice for Floyd reflects sentiment expressed in the wake of the conviction by demonstrators and some Black leaders, who have said that while they they believe the jury made the right decision, Floyd should still be alive, and America has much more work to do in addressing racism as details continue to emerge about other police-involved killings of Black Americans.

Polling conducted ahead of the verdict showed that Black voters, who were nearly united in their belief that Chuavin’s conviction on all three charges was the only acceptable outcome, were less confident than their white peers that the former police officer would be found guilty – suggesting many would be surprised by the outcome. 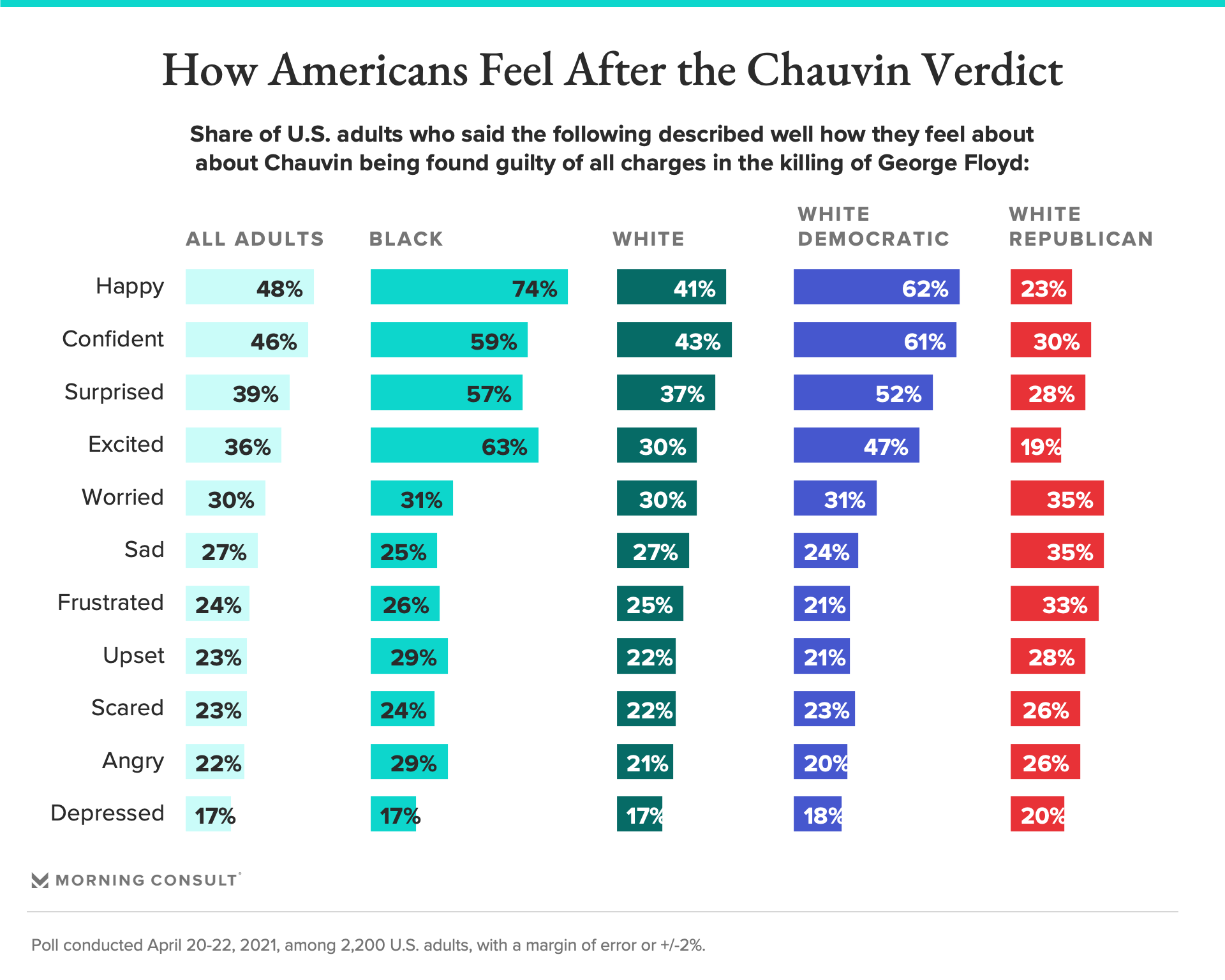 Indeed, a majority of Black Americans (57 percent) said the word “surprised” described their response to the verdict – 20 points higher than the share of white adults who said the same. More than anything else, Black adults were most likely to say they were “happy” – yielding one of the largest divides in post-verdict sentiment between Black and white Americans, driven by white Republicans.

Those feelings of joy about the outcome, which were generally shared by the overall population, came alongside an increase in expected confidence regarding a handful of American institutions involved in the process ahead of Chauvin’s sentencing and as officers involved in other deadly incidents face investigations. 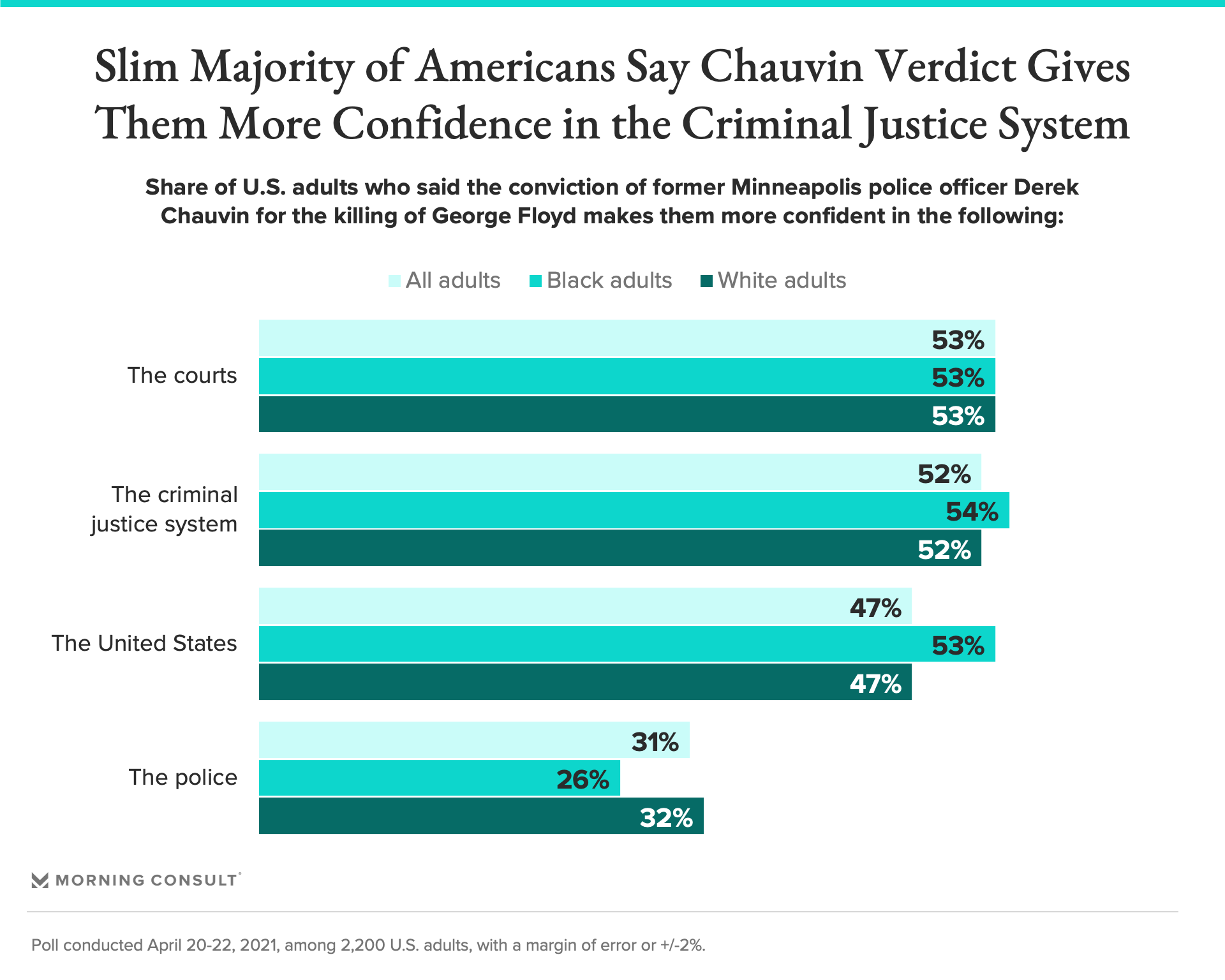 A slim majority of Americans (53 percent), including Black and white adults, said the verdict gave them more confidence in the courts, and similar shares said the same of the criminal justice system – an institution that’s drawn particular ire from demonstrators protesting systemic racism.

Those feelings were matched by a surge in belief that the Black Lives Matter protests sparked by Floyd’s murder last May did have an impact, especially among Black Americans. 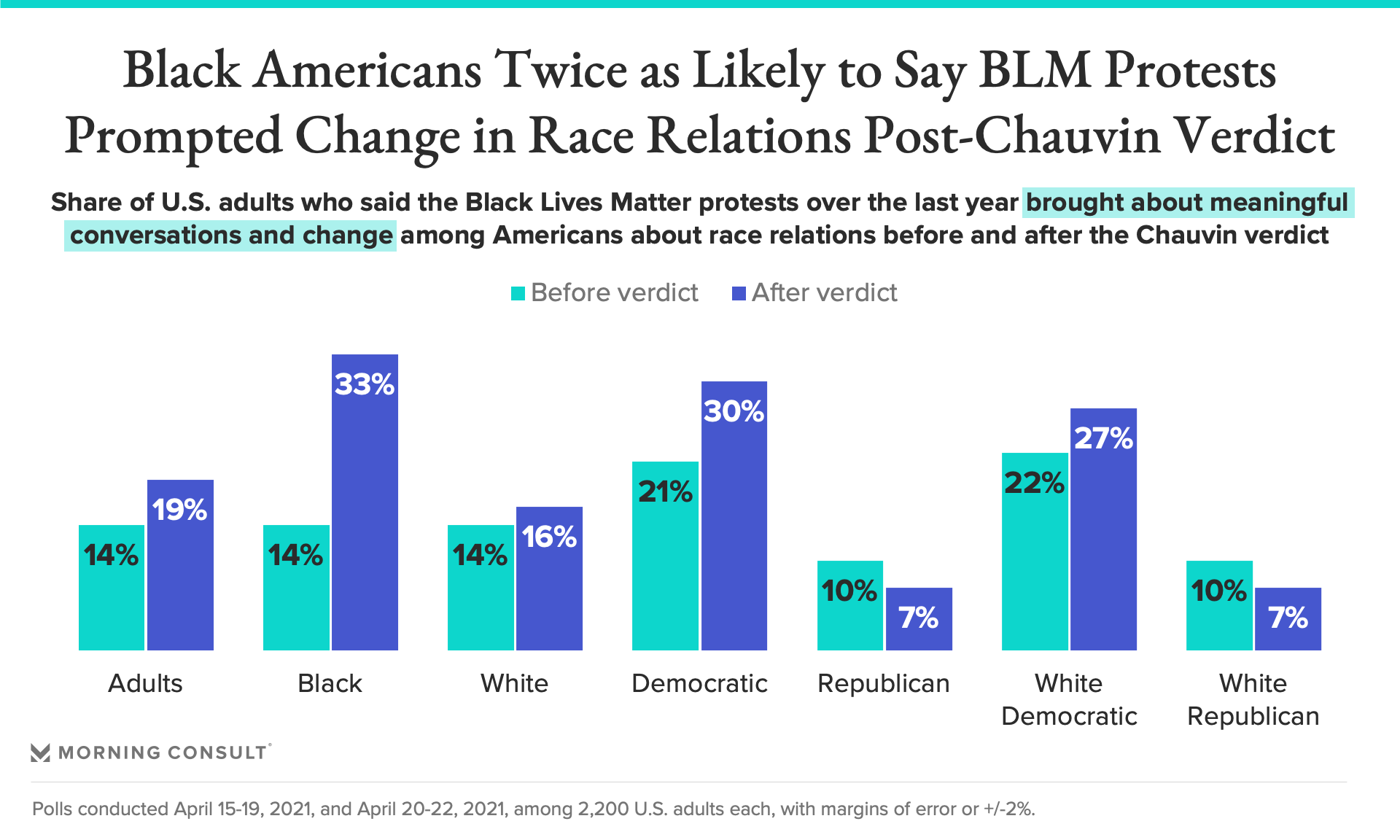 Compared with a survey conducted April 15-19, before the verdict, the share of Black adults who said the protests over the past year “brought about meaningful conversations and change” regarding race relations more than doubled, from 14 percent to 33 percent.

Still, a slim majority of Black adults (51 percent) still say the demonstrations brought “little change in America,” higher than the 37 percent of adults overall who agreed with the sentiment as significant reforms to America’s policing laws face an uphill climb.

Ahead of the verdict, about 7 in 10 adults said they saw police violence against the public as at least a “somewhat” serious problem in the United States – lower than the share who said the same in a July 2016 poll conducted following the shootings of Philando Castile in the Minneapolis area and Alton Sterling in Baton Rouge, La.

Since the verdict, which came the same day that a police officer in Columbus, Ohio, sparked new protests after he shot and killed a 16-year-old Black girl who was armed with a knife, the share of Americans who said they saw police violence as a serious problem went virtually unchanged.

Related: Americans Are Divided on How Brands Should Respond to Chauvin Verdict, Predominantly Believe Statements Are Not Genuine
Criminal Justice Race in America