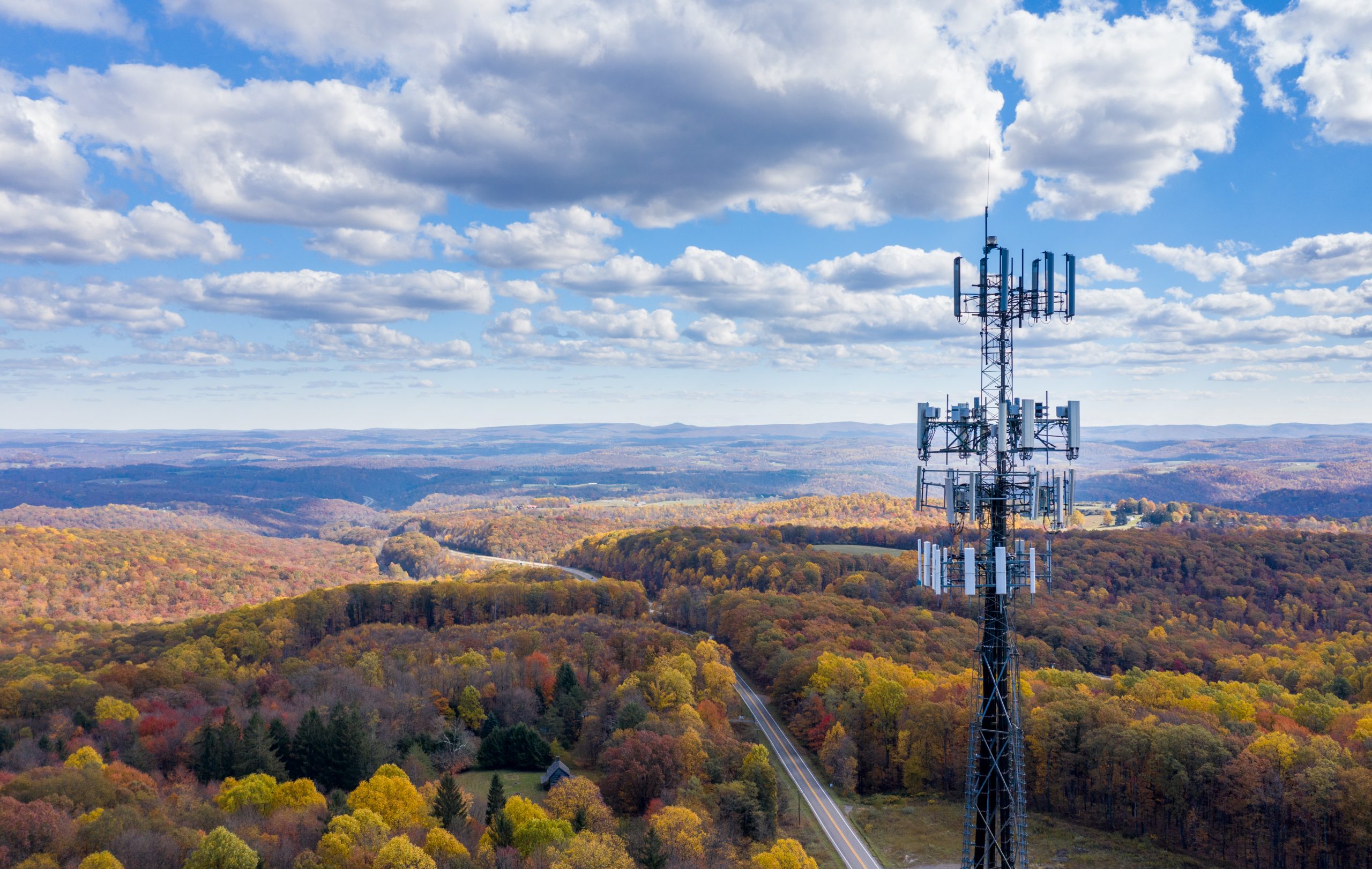 A new Morning Consult poll found that 54 percent of U.S. adults said they had either “a lot” or “some” trust in local governments to give them the best at-home internet service, compared to 75 percent who said the same about private internet providers. (Getty Images)
By Sam Sabin

As the pandemic continues to underscore the importance of reliable, at-home internet service, debate rages over whether local governments should be permitted to build out and run their own broadband networks, either on their own or with the help of a private partner.

The White House, in its infrastructure proposal released earlier this month, has thrown its support behind allowing municipalities to explore such options. And a new Morning Consult poll suggests many adults agree with that stance: 53 percent of U.S. adults said local governments should be able to explore having their own internet services — but they tend to trust local governments less than private internet companies to carry out the job on their own.

The survey, which was conducted online April 16-19 among 2,200 adults, has a margin of error of 2 percentage points. 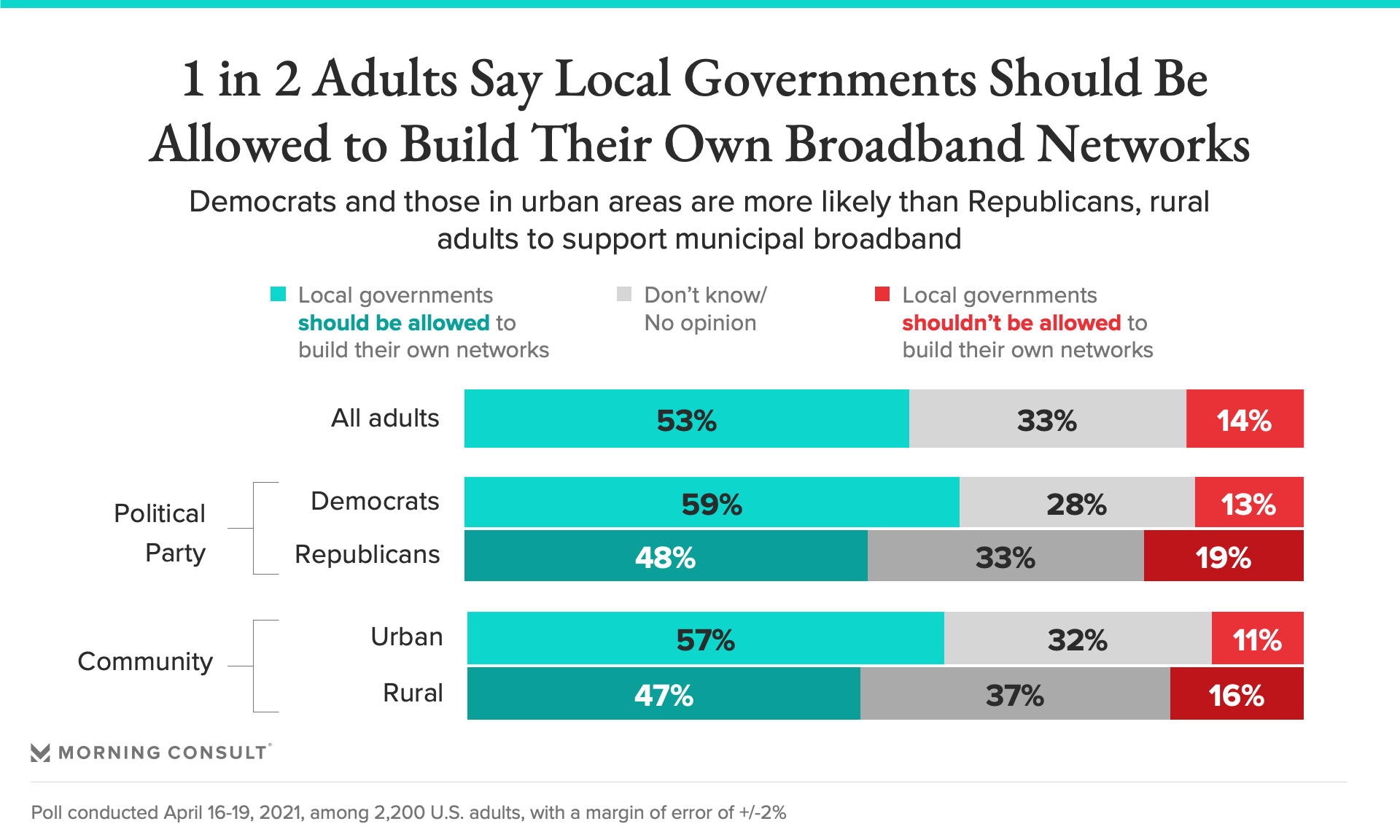 For decades, lawmakers have debated whether cities or towns should be allowed to even consider running and maintaining their own broadband network. Proponents for local government plans say it could reduce costs and spur price competition among internet service providers already in those markets, while opponents, including cable companies and larger internet service providers, worry local governments lack the resources to maintain what can be expensive build-outs and equipment needs.

In 18 states, these plans aren’t even an option because their governments have enacted laws that make it prohibitively difficult to establish community networks, according to research group BroadbandNow, while five other states have laws that are a bit less stringent against the projects but still provide hurdles.

But the White House’s support for the municipality projects of local governments comes at an interesting time in the debate among state and local officials: This year, five states — Arkansas, Idaho, Tennessee, Washington and Montana — have introduced bills to remove restrictions to municipal broadband. The measure failed in Montana, while Arkansas unanimously passed its bill in February.

“No new state has added a barrier in 10 years,” said Christopher Mitchell, director of the Community Broadband Networks Initiative at the Institute for Local Self-Reliance. “The more recent dynamic has been states removing them.”

Yet, in the Morning Consult survey, while over half of adults are in favor of local governments’ being able to explore options for providing a publicly run internet service, they don’t have the same level of trust in them to operate the networks as they do with private internet service providers.

More than 1 in 2 adults (54 percent) said they had either “a lot” or “some” trust in local governments to give them the best at-home internet service, while 75 percent said the same about private internet providers. Those in urban communities were most inclined to trust local governments, with 63 percent saying they had “a lot” or “some” trust, compared to 49 percent of those in rural areas. City dwellers and rural adults had similar levels of trust in private companies, at 74 percent and 72 percent, respectively. 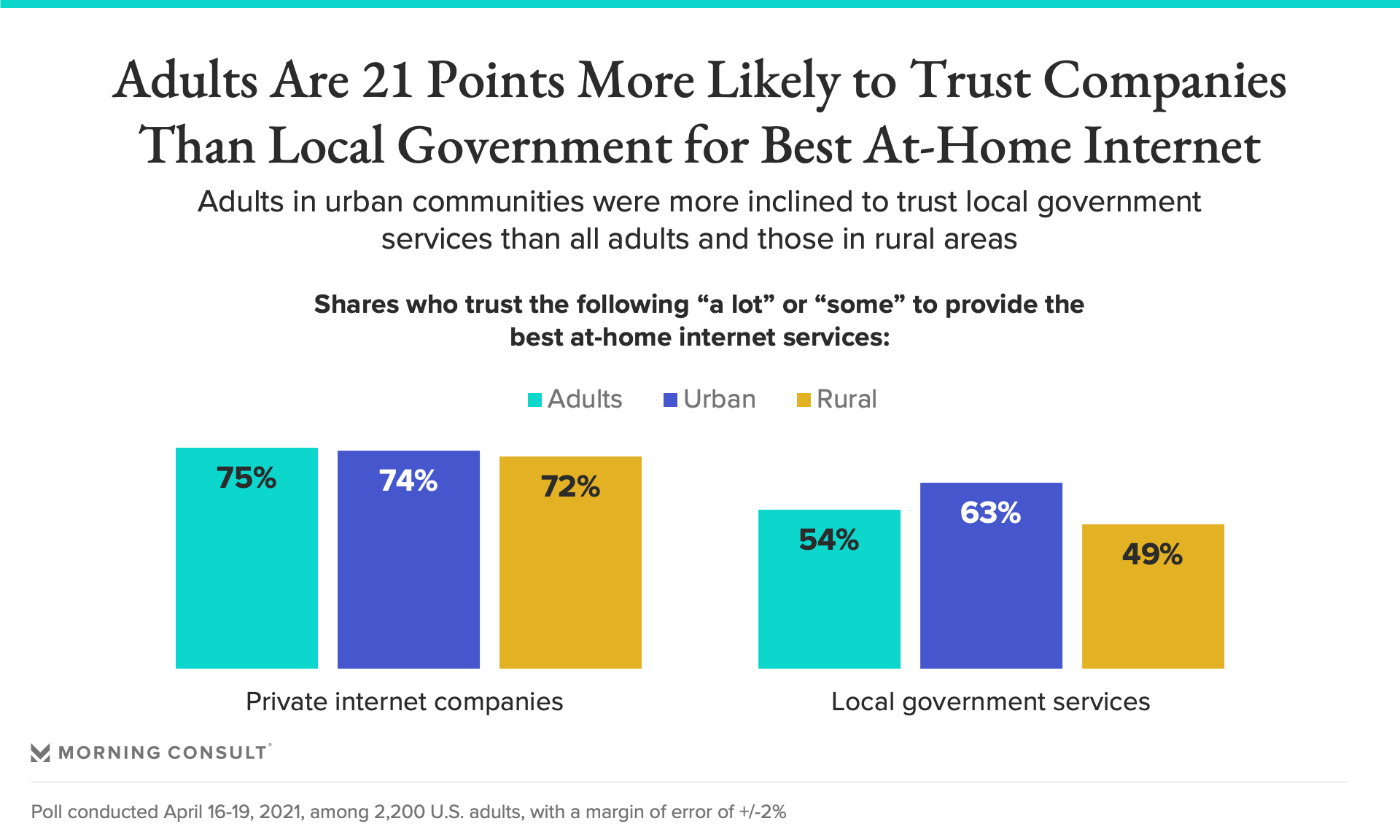 Mitchell said the divide in trust between local governments and private ISPs could be in part because most people are used to the latter operating their service, so they’re going with what they know. But James Assey, executive vice president at cable lobby NCTA – The Internet & Television Association, said adults are aware of the potential failures of public infrastructure, such as electric grids or bridges.

“In the same way if I was playing basketball, I’d want LeBron James on my team — I would want the people who do this day-in and day-out to help us bridge the divide that we know exists today,” Assey said.

Traditionally, municipal broadband projects have been seen as an all-or-nothing gambit. Cities or towns would manage internet infrastructure build-outs and run the services themselves, such is the case in Chattanooga, Tenn.

But recently, more localities have considered public-private partnerships so they wouldn’t be the ones solely responsible for operating the service. In those instances, they could lease their infrastructure to either just one private provider, like what’s happening in Westminster, Md., or to multiple companies with the aim of spurring competition.

No matter which project is pursued, Assey said localities should be cautious when considering these plans, saying that while they could work in some communities, these options should be a “last resort” for closing the digital divide. Most mayors have full plates and their governments aren’t able to take on continuous maintenance investments into their infrastructure, he said, citing the example of Provo, Utah, which sold its network to Google for its fiber build-out after financial troubles.

But Jim Baller, co-founder and president of the Coalition for Local Internet Choice, said the debate regarding whether localities can explore these options transcends partisan lines, citing the unanimous passage of Republican-led Arkansas’ restriction removal bill.

“Like electricity, advanced communications capabilities have become drivers, platforms and enablers of simultaneous progress in just about every area of modern life,” Baller said. “At the local level, these are often viewed as survival issues that cut across party lines.”