Across 14 countries, favorable views about the United States increased by an average of 9 points since Biden’s inauguration 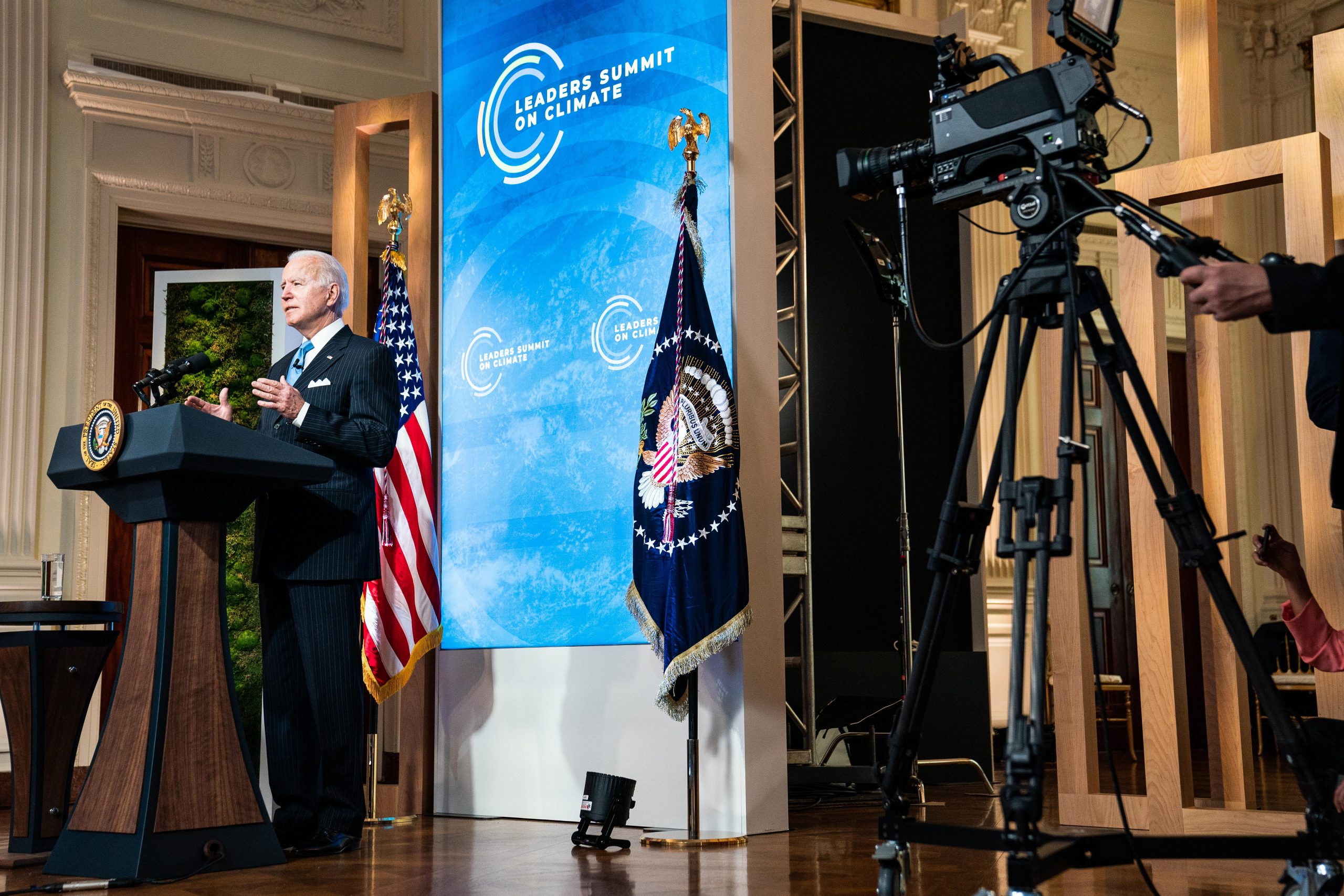 President Joe Biden delivers remarks on April 23 during Day 2 of the virtual Leaders Summit on Climate. New polling among adults in 14 countries shows perceptions of the United States have broadly improved since Biden's inauguration on Jan. 20. (Anna Moneymaker-Pool/Getty Images)
By Eli Yokley

Nearly 100 days later as the United States and the world meets a symbolic milestone of Biden’s presidency, the Oval Office’s current occupant is overseeing a sizable improvement to the American brand across many allied countries, according to Morning Consult Political Intelligence tracking of global sentiment.

The latest surveys of adults in 14 other nations found that favorable views rose by an average of 9 points since Biden’s inauguration, with the largest improvement in international sentiment about the United States over the past three months occurring in Germany. Since Jan. 20, America’s favorability rating increased 22 percentage points in the country, with 46 percent of Germans now holding favorable views and 37 percent holding unfavorable views, down 25 points. 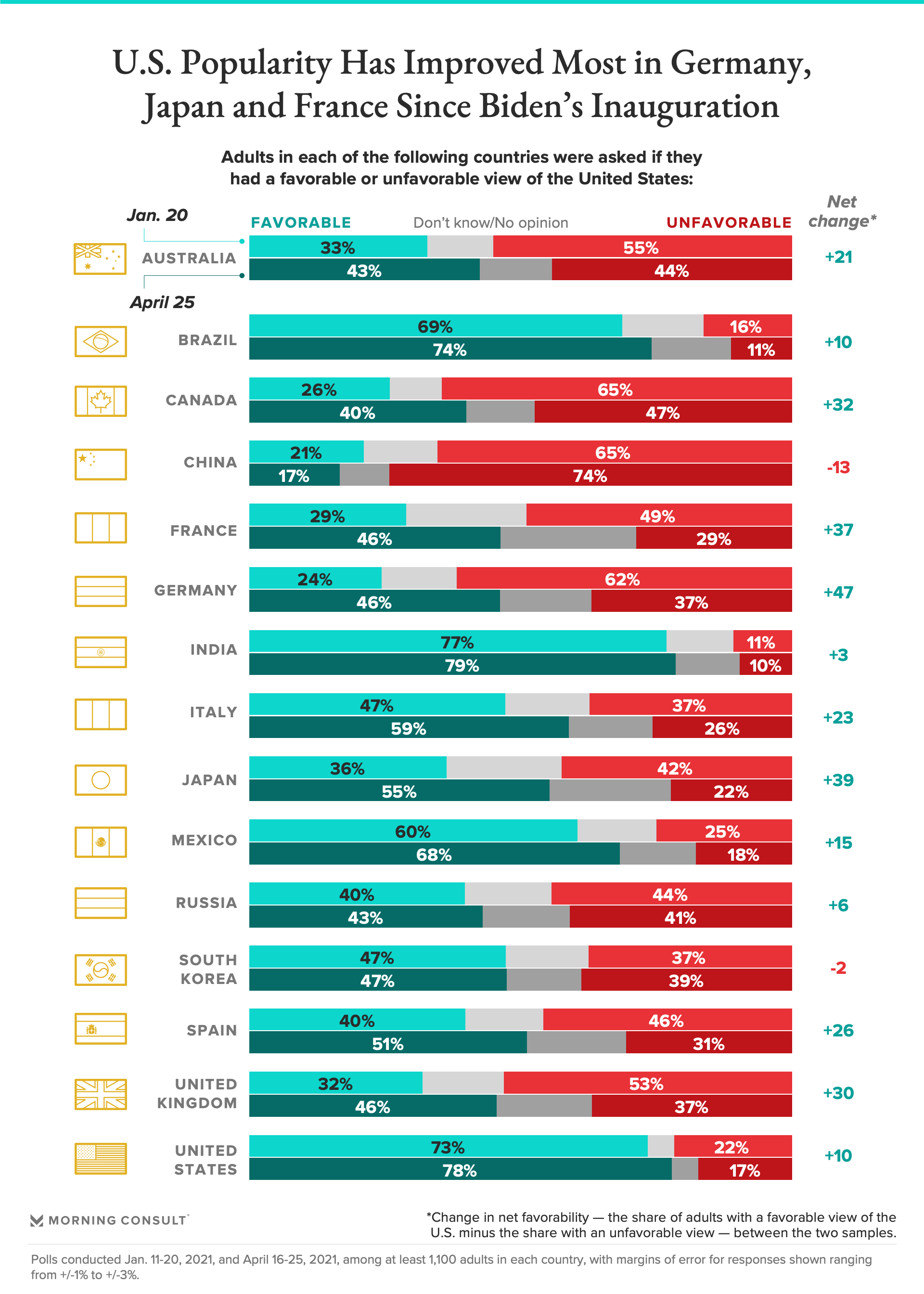 “Most Western Europeans, and Germans are most emblematic here, dislike a hawkish U.S. foreign policy, for which reason George W. had pretty bad approval ratings. With Trump, this effect just exponentiated,” said Dr. Christian Welzel, vice president of the World Values Survey Association and chair in political culture research at the Center for the Study of Democracy at Leuphana University Lüneburg in Germany. “Biden is widely considered as a more than welcome relief, especially with the return to the Paris Accord and his administration’s attempt to recover the transatlantic bond.”

Biden’s message to the world since taking office has been “America is back,” as he put it in remarks at the State Department just two weeks after he took office, declaring diplomacy would be at the center of U.S. foreign policy. That new tone for the world, joined by his traditionalist approach to governing at home after four years of Trump’s volatility, appears to be resonating positively in much of the West.

Along with Germany, favorable views about the United States improved strongly in Japan (up 19 percentage points, to 55 percent) and France (up 17 points, to 46 percent) after dipping below water following America’s Trump-fueled turmoil over the results of the November election.

And across Australia, Japan and many of the other European countries surveyed, America’s reputation – which had generally been on the upswing between Biden’s Nov. 7 victory and the Jan. 6 Capitol riot – has recovered from the weakening it experienced in the wake of the insurrection in Washington. 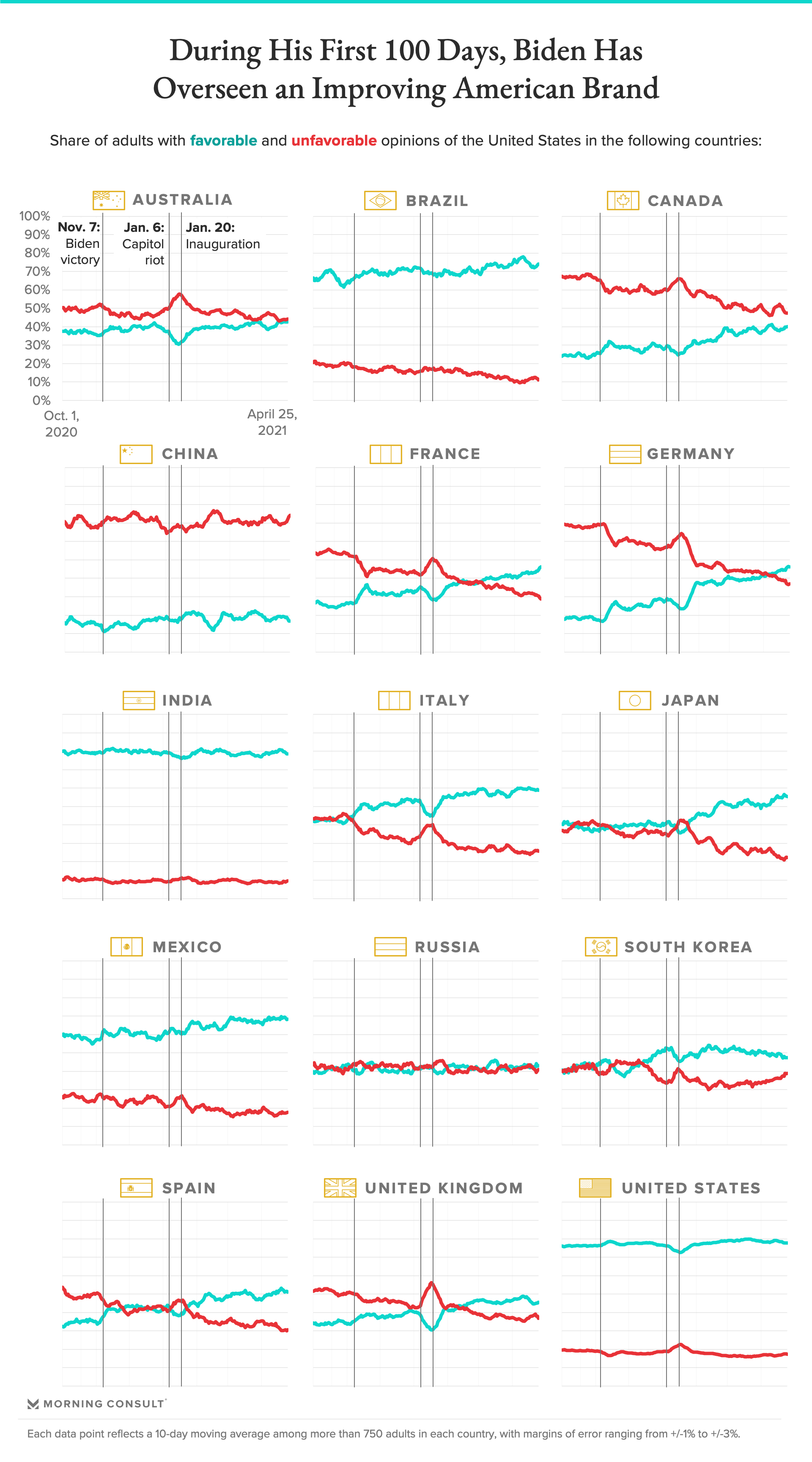 Sentiment about the United States has improved on a smaller scale since Biden’s inauguration in Brazil (where 74 percent hold favorable views), while it has been less responsive to America’s domestic situation in India and Russia, with the latter being targeted with some of Biden’s most aggressive international actions so far.

Closer to home, 68 percent of Mexican adults view the United States favorably – up 8 points since Biden’s inauguration, while the share with unfavorable views dropped by a similar amount, to 18 percent. In Canada, sentiment about the United States remains underwater, though the share with favorable views has increased 14 points, to 40 percent, over the past three months.

Correction: The bar chart in a previous version of this story misrepresented the proportions of U.S. favorability ratings in some countries.